The USD plunged on Thursday as central banks in Europe ramped up their monetary policy tightening, narrowing the interest rate differential between major European economies and the US. The Swiss National Bank and the Bank of England both hiked rates yesterday, with policy-makers in both countries turning more aggressive in their fight against inflation. The SNB surprised markets with a 50bps hike, its first rate hike in 15 years, while the BoE raised its lending rate by a further 25bps to its highest since 2019. Yesterday’s hawkish shift from the SNB and the BoE prompted a broad-based sell-off in the USD, with the trade-weighted dollar (DXY) closing the session 1.45% weaker as it continued to pull back from its recent highs. The USD has however regained its footing this morning after a two-day slide with the DXY legging higher at the open. The recovery in the USD this morning has triggered a broad-based sell-off in FX, with most EM currencies trading in the red ahead of the European open.

Africa: A report by the International Fund for Agricultural Development Financing Facility for Remittances forecasts money sent home by more than 200mn migrant workers around the world to developing nations to reach $5.4trn by 2030, equivalent to double the gross domes-tic product of Africa in 2021. African households received $94bn in remittances last year, a 13% increase from 2020. Reducing the cost of sending money to Africa from an average of 7.83% to the global goal of 3% could unlock an additional $4bn per year for families on the continent. The costs of sending money to Africa are the highest and compare with a global average of 6%.

Botswana: The Bank of Botswana tightened monetary policy yesterday in response to inflation that continues to run red hot. The bank lifted its new benchmark rate by 50 bps to 2.15% which brings the cumulative hikes since April to 101 bps. Bloomberg quoted - “With inflation rising, there could be expectations of inflation continuing to rise meaning that businesses price this into their products and services, leading to higher inflation,” Deputy Governor, Tshokologo Kganetsano said. “We have an instrument called interest rates and the market can see that we are not folding our arms but we are fighting this monster and inflation expectations will come down to our objective range.” The May CPI reading of 11.9% shocked the market, but we are not out of the woods yet. The BoB has forecast that inflation will breach 12% in June be-fore starting its downward trend in the final quarter of 2022. The bank sees upside risks to the inflation outlook being global supply bottle-necks, the war Ukraine and the second-round effects of increases in local prices.

Ivory Coast: Prime Minister Patrick Achi has said that the country’s development plan had attracted donor promises to the tune of $26.1bn. According to Achi, international donors including the World Bank, African Development Bank, Islamic Bank, International Monetary Fund, and the European Union have together promised financial support for the country’s national development program, spanning 2021-2025. The commitments come after a meeting with donors in Abidjan, with the European Union alone making a EUR 6bn pledge. The development plan will require $94.74bn, with $24.65bn expected to come from the public sector and $70.09bn, or almost three-quarters of the amount from the private sector.

Kenya: At a briefing on Thursday, the Africa Centres for Disease Control and Prevention reported that Kenya is currently experiencing a sixth wave of coronavirus infections after the number of positive cases in the country increased on average by 92% in the past month. Kenya has become the second country in the East Africa region to experience a sixth wave after Mauritius. Meanwhile, the CDC noted that Ethiopia, Morocco, and Cape Verde are going through a fifth wave of the pandemic, bringing the number to 16 countries that have suffered a fifth wave of the pandemic.

Mozambique: Renewed attacks by an Islamic State affiliate in northern Mozambique have triggered the evacuation of the country’s biggest solar power plant and threaten to delay further TotalEnergies $20bn liquified natural gas project. Forces from Rwanda and SADC have helped retake towns from insurgents who’ve been wreaking havoc since 2017, largely securing a coastal stretch around Total’s project. But violence has recently spiked, spreading to new areas near Pemba, the Cabo Delgado province’s capital, and causing panic as IS disseminates photos of bodies it says were beheaded by its fighters. The upsurge in attacks began after the end of the rainy season, which hinders movement. Though most have occurred far from Total’s project site, they have ratcheted up risks for companies operating in Cabo Delgado. Moreover, they bring to light the challenges that Mozambican forces and their allies face in containing the militants.

The second quarter of 2022 has been a challenging one for most African currencies amid a plethora of headwinds ranging from the war in Ukraine, idiosyncratic factors, and the tightening global financial conditions. The former has triggered a surge in global oil and food prices, which has weighed on the trade account of countries that are net oil or food importers and, by extension, their currencies. Meanwhile, tightening global financial conditions as the Federal Reserve embarks on aggressive monetary policy tightening has triggered capital outflows out of many countries, adding further downside pressure. On Wednesday, the Federal Reserve hiked by 75bps and signalled that more are to come as it is strongly committed to bringing inflation back to its target level. It is worth noting that 16 of out 22 African currencies tracked by Bloomberg against the USD are in the red.

Against this backdrop, it is unsurprising to see that volatility in the African FX basket is starting to show signs of picking up when looking at ETM’s 30-day realised volatility chart. The most pronounced uptick in volatility has been observed in Uganda. The Ugandan Shilling has lost almost 5% on a quarter-to-date basis against the USD and is amongst the worst performing African currencies despite central bank intervention in the foreign exchange market. While volatility in South Africa has bucked the broader trend and moderated, the South African Rand remains the most volatile among the currencies tracked by ETM.

Overall, the situation is fragile and African countries remain exposed to high commodity prices, particularly oil and wheat, which will have implications for inflation, current-account, and budget balances. In addition to tightening global financial conditions, we see further upside risks for FX volatility in the near term, especially in countries with weak fundamentals. 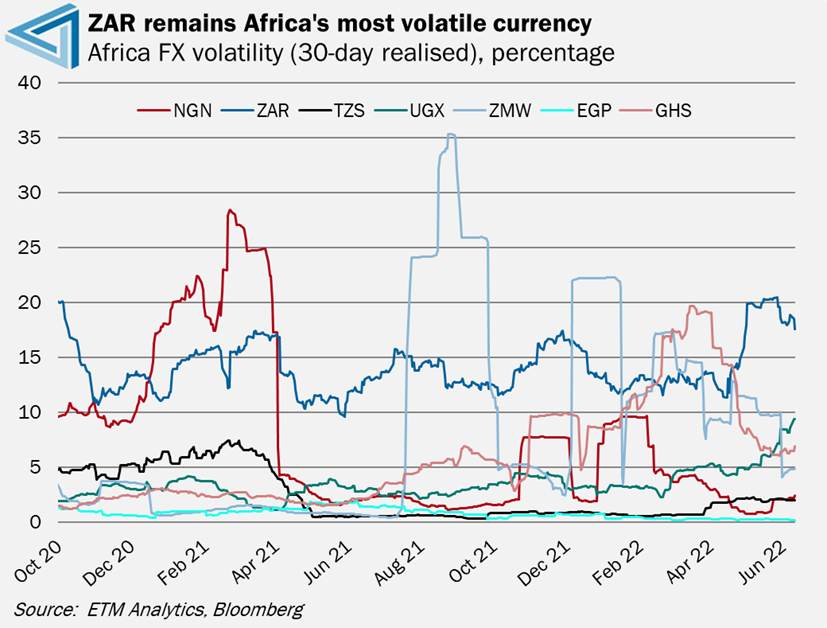 Fixed Income: Zambia takes two steps forwards and one step back in its push to secure a deal with the IMF

Zambia is back in the spotlight after the government presented a plan for getting its debt under control to its creditors on Thursday. This was the latest push from the government to unlock an International Monetary Fund support programme. In order to secure the $1.4bn three-year extended credit facility with the IMF, which has already been approved at a staff level, Zambia needs to restructure part of its $17bn worth of external debt.

The Finance Ministry said in a statement after the virtual talks with creditors that “the government presented to the official creditors the path envisioned for reaching debt sustainability and the support that will be needed from international partners, including initial assurances of debt treatment.” The planned debt restructuring under the G20 framework prioritises debt maturity extensions.

Commenting on the discussion with the IMF on Wednesday, Finance Minister Musokotwane said, “we look forward to continued engagement with the Fund as we negotiate with our creditors and seek a solution to the debt crisis facing our country.” Meanwhile, IMF Deputy Managing Director Antoinette Sayeh described Zambia’s economic programme’s implementation as impressive. Sayeh urged creditors to provide financing assurances as soon as possible, as they are needed before the IMF staff can put forward Zambia’s program.

In addition to the debt restructuring, the IMF said the eventual removal of the fuel subsidy is a condition of receiving debt support from the IMF. While the government has made some significant inroads towards securing a deal with the IMF, the government surprised markets yesterday by announcing an extension to its fuel subsidy. The announcement underscores the difficult position that the government finds itself in.

Looking ahead, despite the speedbumps that still need to be ironed out, we remain of the view that the government will secure a deal with the IMF before the end of the year. While the near-term outlook for Zambian bonds remains gloomy, we remain bullish on Zambian bonds over the medium term now that the country has embarked on a more sustainable debt trajectory. 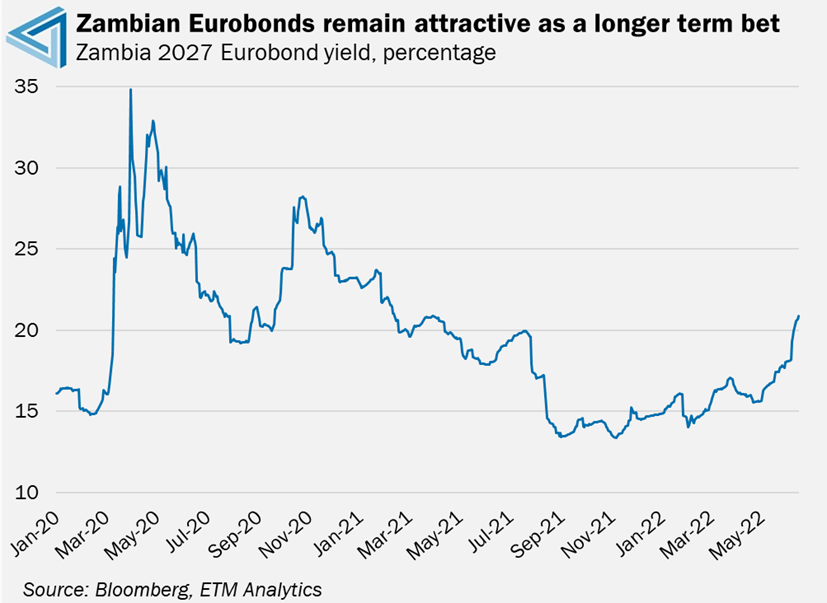 Macroeconomic: Elevated commodity prices have come as a dichotomy for African countries

Many African countries have benefitted from the global commodity boom since they are net exporters of commodities. The accompanying chart provides a graphical overview of African countries that are benefitting from high commodity prices (red and blue) and those that have been negatively impacted (green).

The Russia-Ukraine war has resulted in global trade decelerations and rising commodity prices, all of which affect countries in the region that are net commodity importers. Countries that are highly dependent on imports from Russia and Ukraine for imports have suffered the most. These countries are highly exposed to the price of cereals, edible oils and fertiliser.

The impact of rising global commodity prices on the trade accounts of African countries is dependent on whether the country is a net importer or exporter of commodities. Trade balances have deteriorated in countries that are net oil and food importers, and which lack other commodities to offset the increase in oil and food prices. On the other hand, the trade balances have improved in countries with a diversified basket of commodities. As we have seen in South Africa, high commodity prices have supported SA’s trade account. The favourable trade dynamics have helped underpin the South African Rand’s resilience.

Oil abundant countries in Africa are benefitting from high international oil prices. The biggest beneficiaries are Angola, Nigeria, the Republic of Congo and Gabon. While the high oil prices are supporting the trade accounts of African oil exporters, it is worth pointing out that refining capabilities are limited in these countries, making them net importers of refined fuels. Moreover, there is also a lot of political instability with-in these countries, which could add to production delays if conflict arises. Nigeria and Angola, Africa’s two largest oil producers, are both struggling to meet their respective OPEC quotas. Both countries are benefitting handsomely from the high international prices, which have resulted in windfall tax revenues and a surge in hard currency inflows.