Bank of Botswana is next up to deliver its rate verdict

An overvalued dollar came under considerable pressure overnight following Fed Chairman Powell’s comments suggesting the Fed will shift towards smaller hikes, possibly as early as Dec. This is the clearest sign yet that the Fed will pivot before any of the other major central banks. After that, it will likely lead DM central banks to cut rates later in 2023. This is in keeping with expectations that the USD needs to moderate to more fundamentally justified levels. Other major currencies have responded to Powell’s comments by recovering more lost ground, which will likely become the dominant theme for 2023. Powell also indicated that the Fed was mindful of overtightening and that data would be carefully scrutinised. The tide appears to have shifted against the USD, which is also reflected in last week’s CFTC data, which showed that speculators turned net bearish the USD for the first time in years.

Botswana: The Bank of Botswana is the next African central bank scheduled to announce its interest rate verdict. The Bank of Botswana left its key interest rate unchanged at 2.65% at its October rate decision. While a rate hike can’t be ruled out, the policy rate will likely remain steady for the second consecutive meeting as the pula has seen a recovery of late, mitigating some supply-side pressures together with the government's efforts to cap price pressures. Still, further policy tightening could be required to anchor inflation and inflation expectations. Given that the global monetary policy tide seems to be turning, with traders across the globe pricing in rate cuts next year amid expectations for a meaningful slowdown in global growth, further policy guidance will go some way in market positioning heading into the new year.

Ghana: The International Monetary Fund (IMF) will visit Ghana from Dec. 1 to 13 to continue discussions with the West African country over its post-COVID program for economic growth and associated policies and reforms that could be supported by a new IMF lending arrangement. Debt restructuring will feature prominently in the discussions, with Ghana expecting to receive $3 billion over three years if an agreement is reached. A successful IMF programme would give the country policy credibility and restore macroeconomic stability. This comes as the country grapples with its worst economic crisis in a generation, with rampant inflation, spiralling debt and a tumbling local currency.

Egypt: Data from the Central Agency for Public Mobilisation and Statistics revealed that earnings from the Suez Canal surged significantly in September compared to a year earlier due to the increase in the total number of ships using the canal. Revenue rose to EGP 13.3bn in September compared with EGP 8.8bn in the corresponding period in 2021. Meanwhile, the total number of ships increased by 169 ships to 2025 ships. The increase in revenue from the Suez Canal is welcome as it boosts the country’s foreign earnings at a time when global financial conditions have tightened.

Zambia: Zambia’s debt restructuring plans will likely come into effect during the first three months of next year. Speaking during an interview at the Reuters NEXT conference, Finance Minister Situmbeko Musokotwane said that they are pushing hard to restructure its $17.3bn debt (previously thought to be about $14.87bn). The restructuring of the debt is part of the conditions of receiving a $1.3bn loan from the IMF in August. Musokotwane added that private creditors were cooperating in debt relief discussions and that active engagements were happening with Chinese creditors.

Nigeria: Minister of Power Abubakar Aliyu revealed that Nigeria would partner with China to boost its renewable sector after reiterating the country’s commitment to its energy transition plan. Abuja is aiming to use solar power as a way of achieving its target of a carbon-neutral economy by 2060, which makes partnering with China more sensible, given that Beijing is the world’s largest manufacturer of solar panels.

Angola: In its latest attempt to address issues relating to institutional corruption, the Angolan government issued an arrest warrant for Isabel dos Santos (daughter of late former president Eduardo dos Santos) to face questioning over alleged corruption. Dos Santos is accused of enriching herself with state resources while controlling Sonangol, the state-owned oil company (NOC). The arrest warrant was made through Interpol after the Angolan government failed to locate her and received no response from her lawyers to multiple requests. The pursuit of dealing with graft activities by President Lourenco’s administration will be welcome as it helps restore credibility and serve as a warning to officials occupying public offices.

Oil: Oil prices have rallied overnight following a broader surge in risk assets and a weaker USD. Fed Chair Jerome Powell signalled yesterday that the central bank would be looking to slow its pace of rate hikes as early as December, which pressured the USD and caused a rally in everything from equities to commodities. As a result, we have Brent trading at around $86.70 this morning, its highest in over a week. Crude received additional support from a massive decline in US inventories last week, with the official government data showing a 12.6mn barrel drawdown as exports from the US surged. Inventories at the key hub at Cushing were down 415k barrels, while gasoline and distillate inventories actually increased. 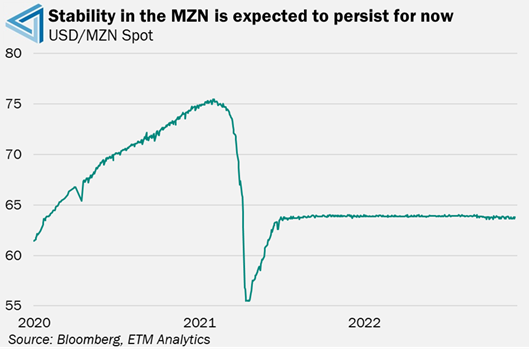 The central bank said in its policy statement that the decision to remain restrictive comes on the back of “high risks and uncertainties associated with inflation forecasts, especially the effects of the persistence of the geopolitical tension in Europe and the external demand slowdown, despite prospects of inflation reverting to a single digit in the medium term.” While inflation risks remain elevated, the Committee expects inflation to fall back into single-digit territory in the medium term on the back of the resilience in the MZN and as the restrictive lending conditions weigh on consumption demand.

Looking ahead, the stability in the MZN is expected to persist in the near term. However, given expectations for a deterioration in the country’s current account dynamics, the risks are skewed in favour of a depreciation in the MZN. However, over the longer term (3+ years), the outlook for the MZN is bullish amid expectations for a marked improvement in the country’s terms of trade as LNG exports ramp up and hard currency inflows increase.

While Moody’s downgraded Ghana further into junk territory, Ghanaian Eurobonds continued to strengthen on Wednesday. Ghana’s 2027 Eurobond price rose 3.6% yesterday to end the session just below 40.0, its highest level in more than six weeks. Yesterday’s move suggests that the market has fully priced in the risk of a debt restructuring and that investors are becoming hopeful that Ghana will return to a more sustainable fiscal position over the medium to longer term amid bets that a deal with the International Monetary Fund will be secured. 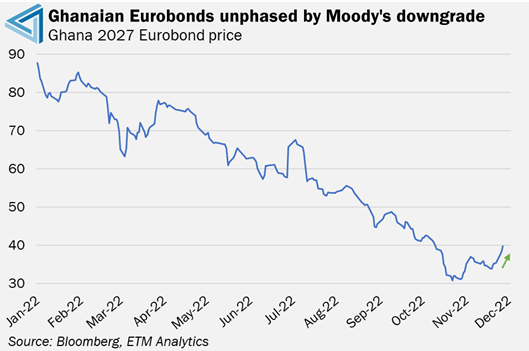 Moody’s said that Ghana’s CA rating is representative of expectations that private creditors will likely incur substantial losses in restructuring both foreign and domestic currency debts outlined by the government in its proposed 2023 budget. Moody’s said that it forecasts Ghana’s debt-to-GDP ratio to hit 104% at the end of the year, adding that interest payments are projected to consume 58% of the government's revenue in 2022.

Market expectations are that the government will push to conclude a debt restructuring deal with investors within the next few months to strengthen the country’s financial position to bolster its chances of securing a deal with the IMF worth as much as $3bn. While investors remain extremely cautious, yesterday’s move suggests that there is a degree of optimism building in the market that the government will secure a deal with the IMF and return to a more sustainable fiscal path in the medium to long term.

The Bank of Namibia made a unanimous decision to increase its benchmark Repo Rate by 50bps to 6.75%. Policymakers remain committed to containing inflation while at the same time supporting the economic recovery. The central bank noted that domestic activity has recovered smartly this year. The sectors that have rebounded the most are mining, agriculture, transport, communication and tourism. 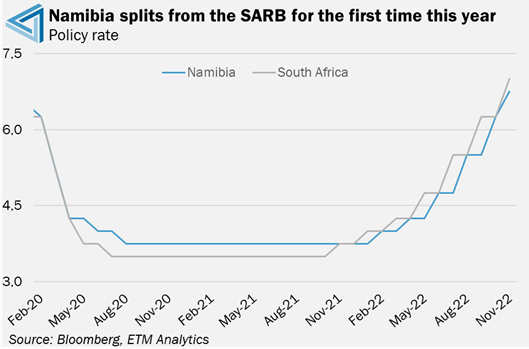 ETM expects the SARB to deliver one or possibly two more rate hikes of a smaller magnitude (25bps) in the first quarter of 2023, taking the Repo Rate to a peak of 7.25% or 7.50% in the current cycle. With growth risks intensifying and the ZAR expected to stage a meaningful recovery in the first half of next year against the backdrop of a pivot in global monetary policy, we expect rates to begin to fall in the second half of next year.