Bahrain's tiny size means its normalisation of ties with Israel (announced on 11 September) changes little apart from competition with freezones in the UAE for attracting Israeli firms seeking to address the GCC and regional market (with its exports of diamonds, gold, pharmaceuticals, defence and security equipment, and technology).

Bahrain's dependence on bilateral financial assistance from Saudi (and others in the GCC) to cope with its fiscal deficit and external debt of approximately 10% and 220% of GDP, respectively, means it is inconceivable that the deal has occurred without tacit approval from Saudi. Therefore, there should be no impact on the outlook for that bilateral assistance, but the importance of the deal is the signal it sends on Saudi foreign policy intentions.

The deal follows the normalisation of UAE and Israel ties (announced on 14 August) and the subsequent use of Bahrain airspace for the inaugural Israel to UAE flight. It also follows comments from Saudi Foreign Minister Prince Faisal bin Farhan (on 19 August) which reaffirmed commitment to the 2002 Arab Peace Initiative (withdrawal of Israel back to pre-1967 borders, two-states, right of return for Palestinian refugees) but did not criticise the UAE-Israel deal. A Saudi-Israel deal would represent a far more significant change than deals involving Bahrain or the likes of Oman or Sudan.

The signal on Saudi policy from the Bahrain deal is ambiguous: on the one hand, this could be as far as Saudi is willing to go (no formal normalisation of ties in the near-term but an unwillingness to obstruct others) but, on the other hand, the Bahrain deal could be a test case for how the domestic citizen population in Bahrain responds (where Bahrain arguably has seen much more political debate and protest in the public sphere than the UAE).

Nevertheless, in any event, given the overlap which already exists between Israel and Saudi on Iran concerns, US alignment, and hedging for a potential Biden US presidency (Biden's public stance is against Israeli annexation), the deals involving Israel and some members of the GCC, while significant of course, should neither be labelled as "peace deals" (these countries neither share a border nor have directly fought wars) nor should they be considered as geopolitically game-changing as the deal with Egypt in 1978 (prior to which direct wars had been fought and Egypt was in the cold war orbit of the USSR).

Because there is little direct economic impact from the normalisation of ties with Israel (precisely because it should not impact bilateral assistance and overall relations with Saudi) there should be little impact on listed securities in Bahrain.

Bahrain equities, measured by the local Bahrain Bourse All Share index, are down 9% ytd in total US$ return terms, and valued on 0.9x trailing price/book (13% ROE), which is close to par with the 5-year median. The index is dominated by the 33% weight for Ahli United Bank (AUB), whose takeover by Kuwait Finance House (KFH), first agreed in January 2019, has been delayed to December 2020. This means that AUB will not immediately benefit from the initial passive EM fund inflows related to Kuwait's inclusion in MSCI EM in November 2020 (KFH is 15% of the local Kuwait equity index) and there is an additional risk of less favourable acquisition terms from KFH. 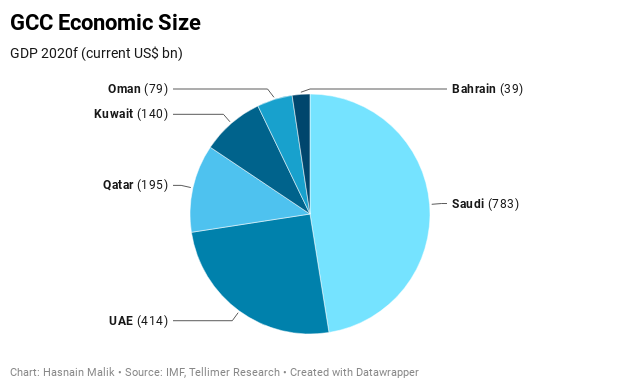 UAE-Israel: Geopolitical and economic aspects of the deal