After another brutal week in the markets, the yield on EM sovereign dollar bonds closed on Friday at 9.25%, having breached 9% just over a week ago, to reach its highest level since the pandemic (and it is only 31bps off its pandemic peak), and – excluding the exceptional periods of the pandemic and global financial crisis (GFC) - essentially its highest level in 'normal' times, on this series (based on the Bloomberg EM Sovereign USD index). The yield has risen 213bps since this leg of the sell-off began in mid-August and by 440bps year to date. 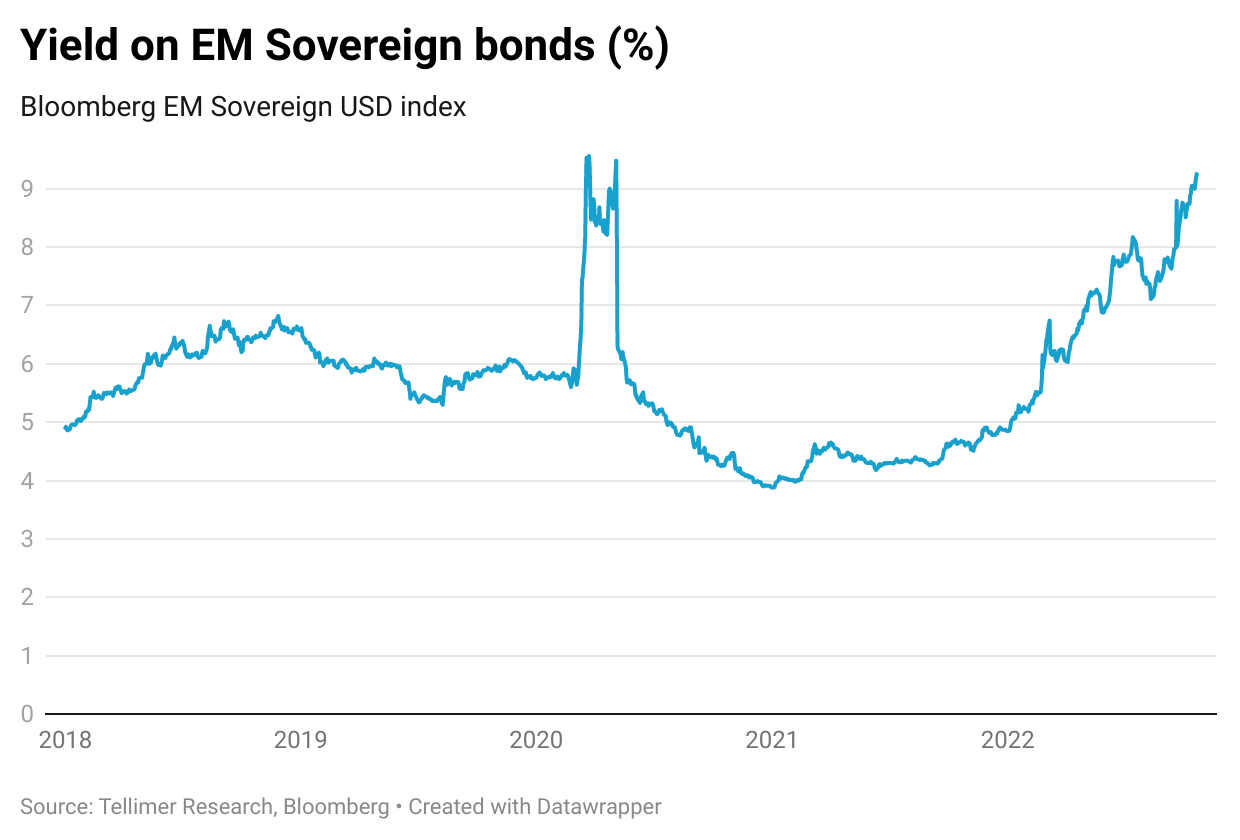 And that's the average yield. Within the index, investment grade (IG) is nudging 6% (which is higher than when Zambia issued its debut eurobond in 2012), while high yield (HY) is close to 13%. The HY yield is, however, still 259bps below its peak in the pandemic, when there were c36 days when the yield was higher than it is now (although macro-policy arguably provided more support to EM bonds then than it can do now). And yet, while HY yields are still below their pandemic highs, IG yields are much higher than they reached then. 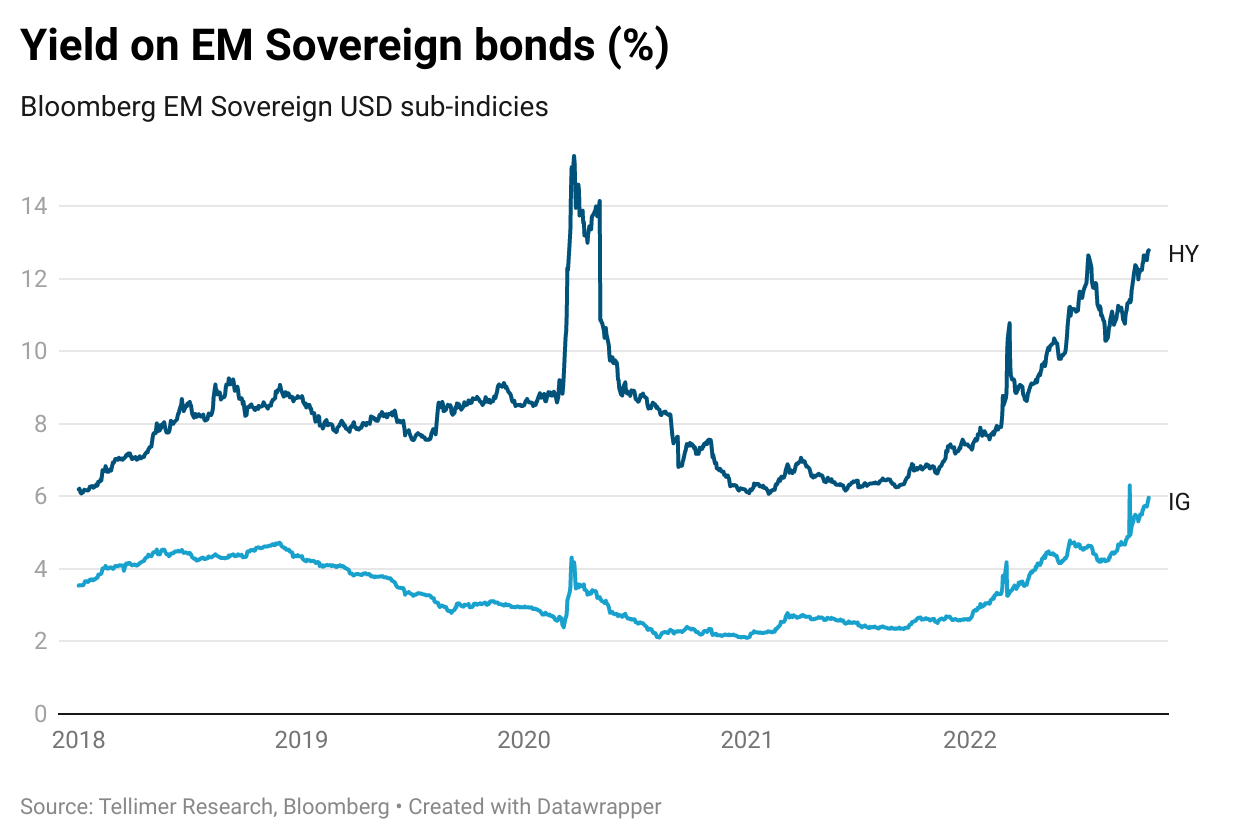 The rise in the nominal EM sovereign yield mainly reflects the continuing rise in US bond yields, with the 10-year last week reaching its highest rate in intraday trading since 2007 (touching 4.34% on Friday, before closing at 4.22%, down 1bps on the day before), as investor fears over the global rate outlook intensified. The Thursday close of 4.23% was the highest close since June 2008 (4.27%). This marked a rise of c20bps on the week and 39bps on the month (in fact, the rise on the month is even starker when we consider that the yield fell by 20bps on 3 October to 3.64%; yields have risen by 58bps since then). The 10-year yield has risen 271bps this year and by 164bps since its recent low of 2.57% on 1 August.

In contrast, the rise in the EM spread (country risk premium) has been more contained, up by just 146bps this year and by 79bps since this leg of the sell-off began in August, to close last week at 483bps. This is the same level it peaked at in March, in the aftermath of Russia's invasion of Ukraine, but still 23bps shy of the peak this year of 506bps in July. However, it is still within the range of the highest-ever level excluding the exceptional periods of the pandemic and GFC since 2003 (when the series began).

By country constituent, the biggest movers (largest increase – ie worst performers) in spread terms since August have been Pakistan, Ghana, Ukraine, Ethiopia and Mongolia (followed by Nigeria and Kenya). Those whose spreads have narrowed the most (best performers) are El Salvador, Namibia, Tunisia, Bolivia and Georgia. This excludes those in default (Lebanon, Sri Lanka, Suriname and Zambia) and special cases (Belarus -2,693bps after the government's buyback proposal in September but rated default by S&P and Fitch). 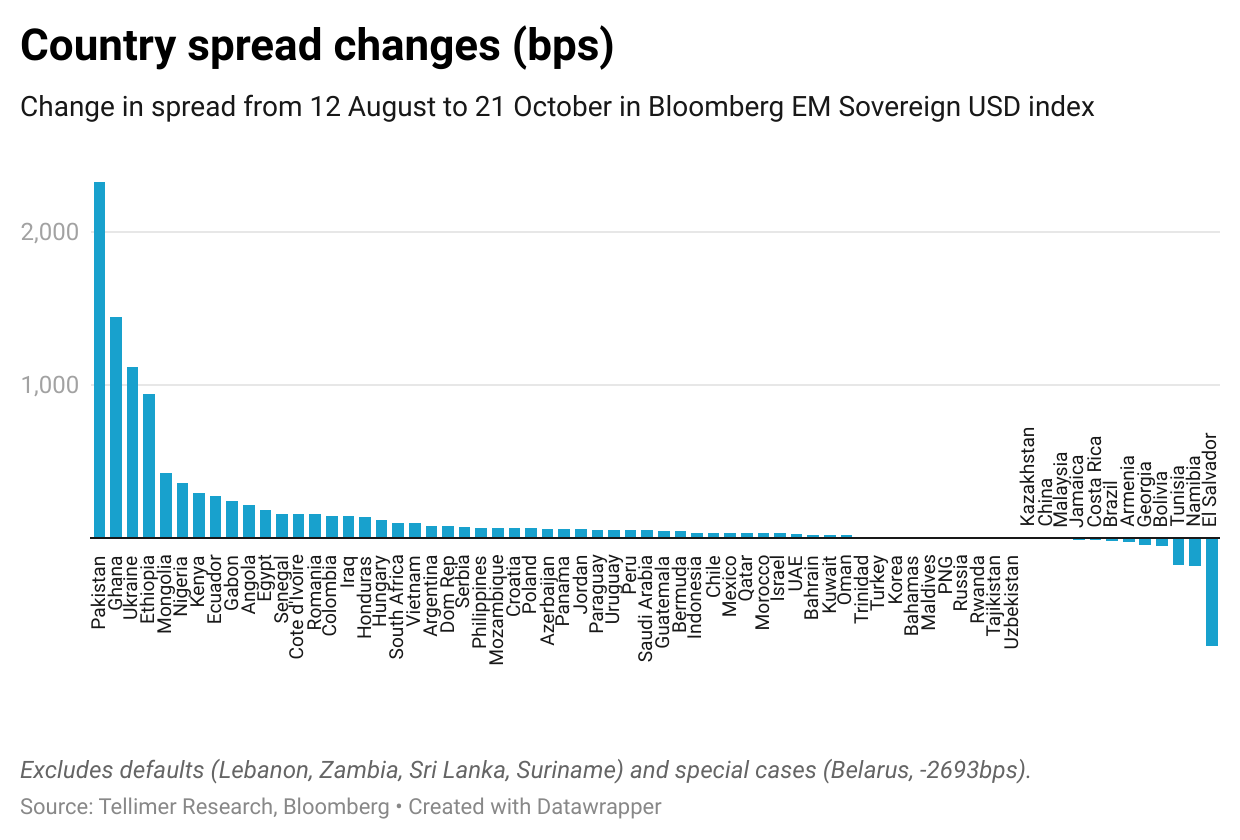 As a result the total return on the index is now -26% ytd. 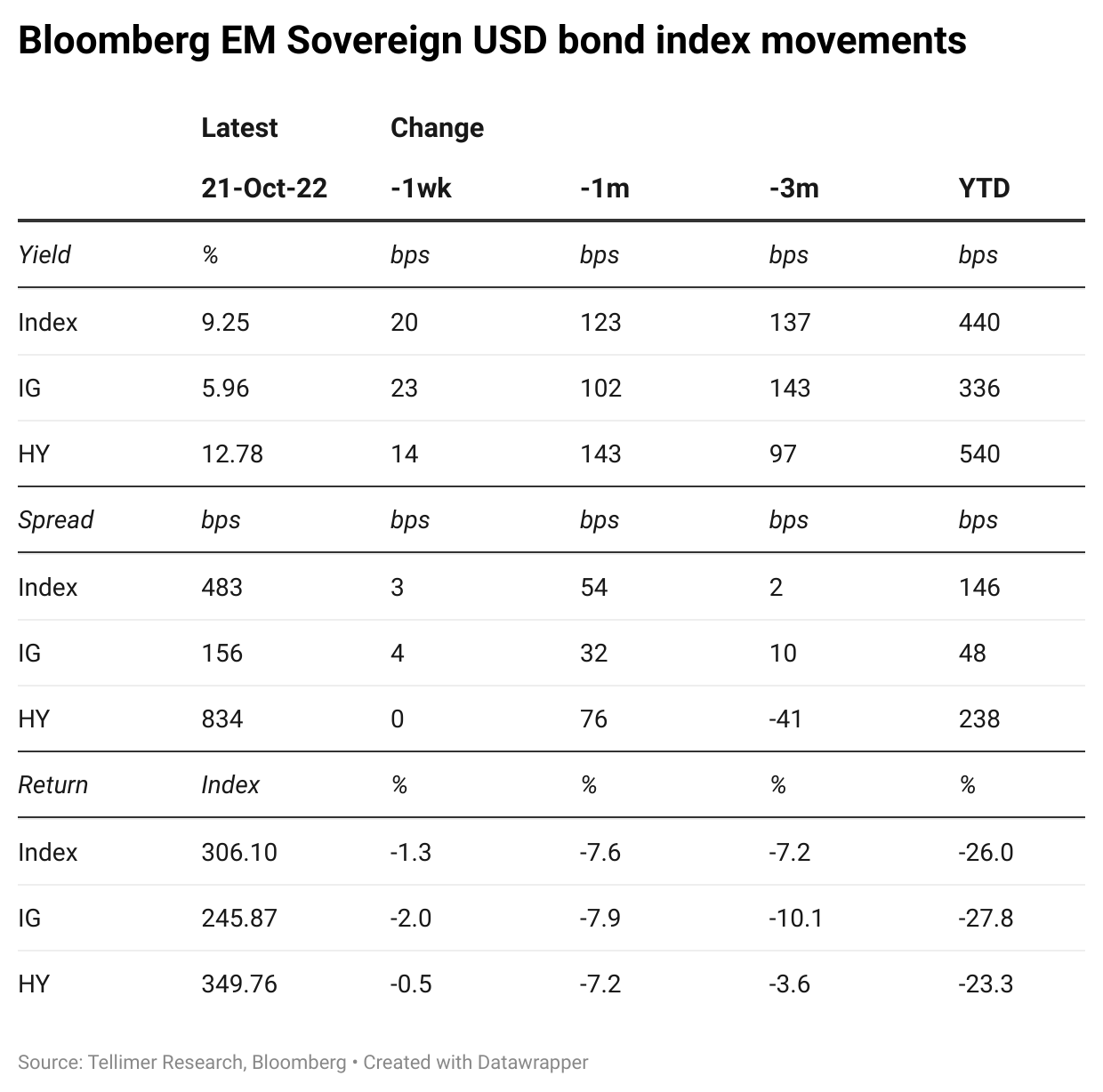 Within the index, the top performers in terms of total returns year to date (and that means least negative, as no country constituent has seen positive returns) have been somewhat idiosyncratic, led by Suriname (in default), Croatia, Poland, Vietnam (few dollar bonds), Trinidad, Iraq (oil) and – surprisingly – Turkey.

The worst performers year to date are those that are in or have fallen into default: Russia (which is now excluded from the index due to sanctions), Belarus, Ukraine (consent solicitation to temporarily suspend bond payments), Sri Lanka, Zambia and Lebanon. Or in that are in heightened concerns of distress and skirting default: Pakistan and Ghana. 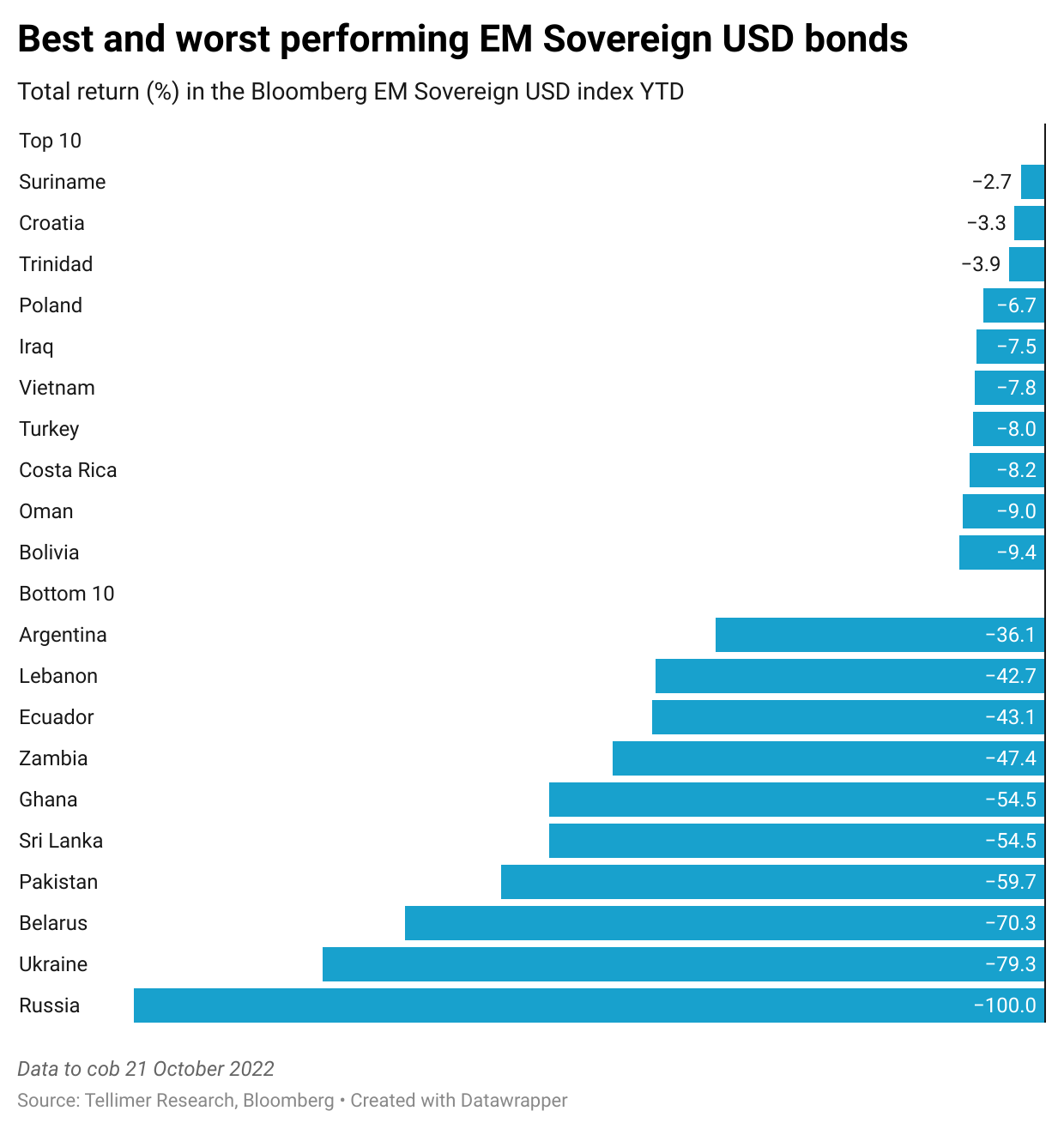 We present this in a simple scatter plot below, with the total return from January to August on the x-axis and the total return since August on the y-axis (we divide the two periods at 12 August for ease). So, the closer to the right-hand side, the better performance over January-August, and, the higher up the chart, the better the performance since August (most countries are below the zero line of the y-axis as they have seen negative returns since then, bar a couple). If performance in the most recent sub-period was consistent with performance in the prior sub-period, we'd expect to see some sort of positive relationship, an upward-sloping trend line (a kind of 45' line if the data were annualised – we haven't annualised that data, so it wouldn't strictly be 45 degrees given the sub-periods are of different lengths).

Our stylised chart shows a bunching of most countries in the bottom-right quadrant, around the hypothetical 45' trend line (that is, it suggests most countries' performance since August is a continuation of their performance in the first part of the year – no surprises). This is perhaps most obviously illustrated by Sri Lanka, Ghana, Pakistan, Zambia and Ecuador, while Colombia, Nigeria and Senegal have fallen by more since August (c-20%) than they did in the prior period (c-10%). Angola has fallen more since August (-15%) than it did in the year to August (-3%), while Namibia is in reverse, performing better since August (3%) compared with the previous period (-14%).

But some countries deviate markedly from this general position – idiosyncratic or special sits. Those that stand out include Belarus (jumping sharply after the government's buyback proposal in September, after collapsing earlier this year), Ukraine (stabilising a bit after its sharp fall, perhaps helped by its debt service suspension and military gains), El Salvador (its tender offer may have eased near-term default concerns) and Tunisia (positive return since August as opposed to a negative return in the year to August, benefitting from the recent IMF staff-level agreement). 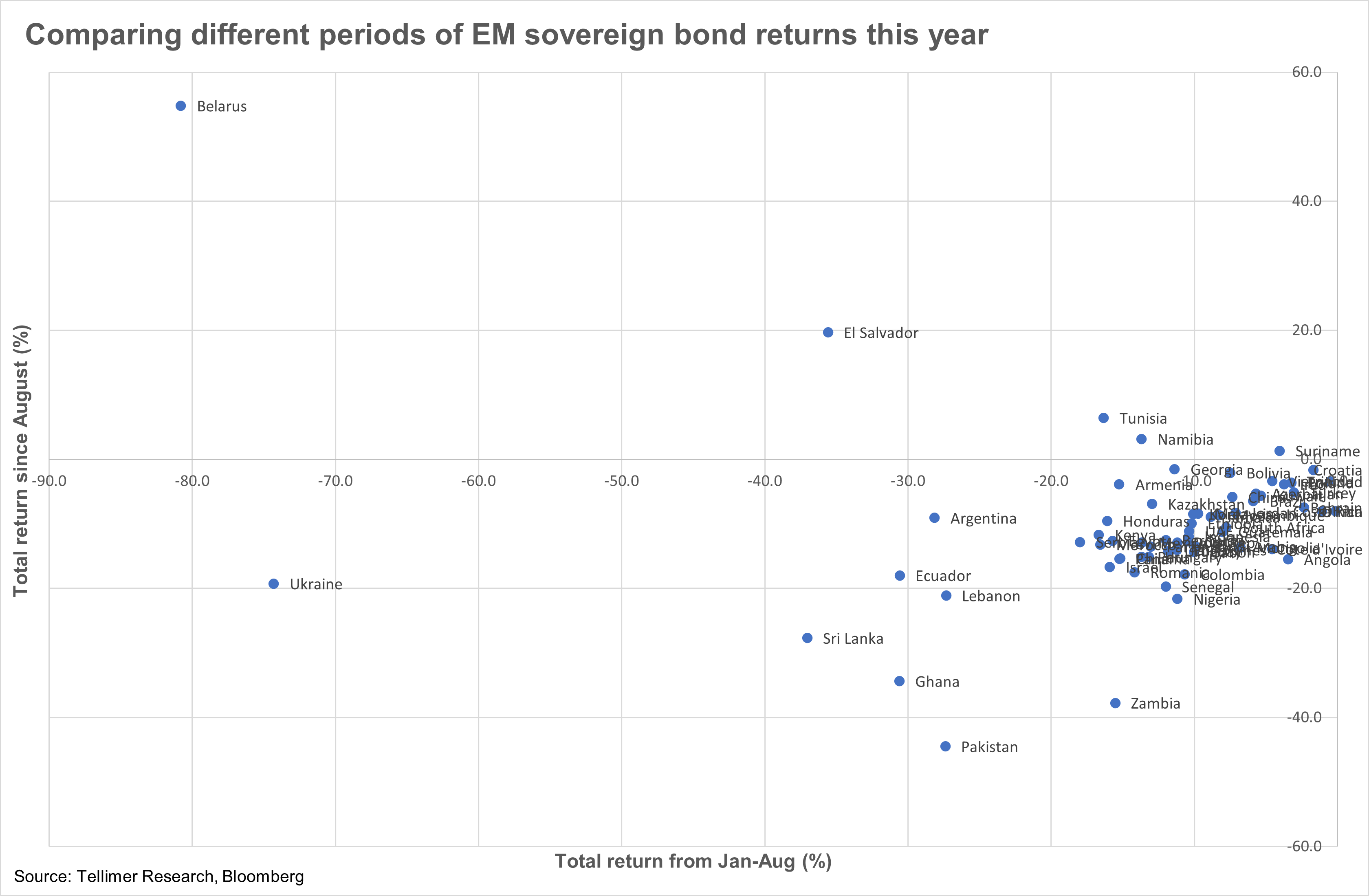 The rising yield environment, whereby, in particular, US bond yields have risen and are more volatile as a result of policy tightening and uncertainty about the rate outlook, shows no sign of letting up. This will continue to put EM under pressure, while its impact could spread, perhaps even dragging down those countries that were in the second tier of vulnerable countries, behind the most vulnerable, when they might have thought they were immune, or at least had escaped its worst effects.