Assessing the impact of Nigeria's worst floods in a decade

"For some, climate change may be theoretical, but for us, it is a reality we live with everyday." – Ahmat Jidoud, Minister of Finance, Niger at the World Bank meetings in DC

Over the past week, floods caused by abundant rains and an emergency release of water from Cameroon's Lagdo Dam have affected large areas of western and central Africa. According to reports, over 5mn people in 19 countries in the region have been affected so far. 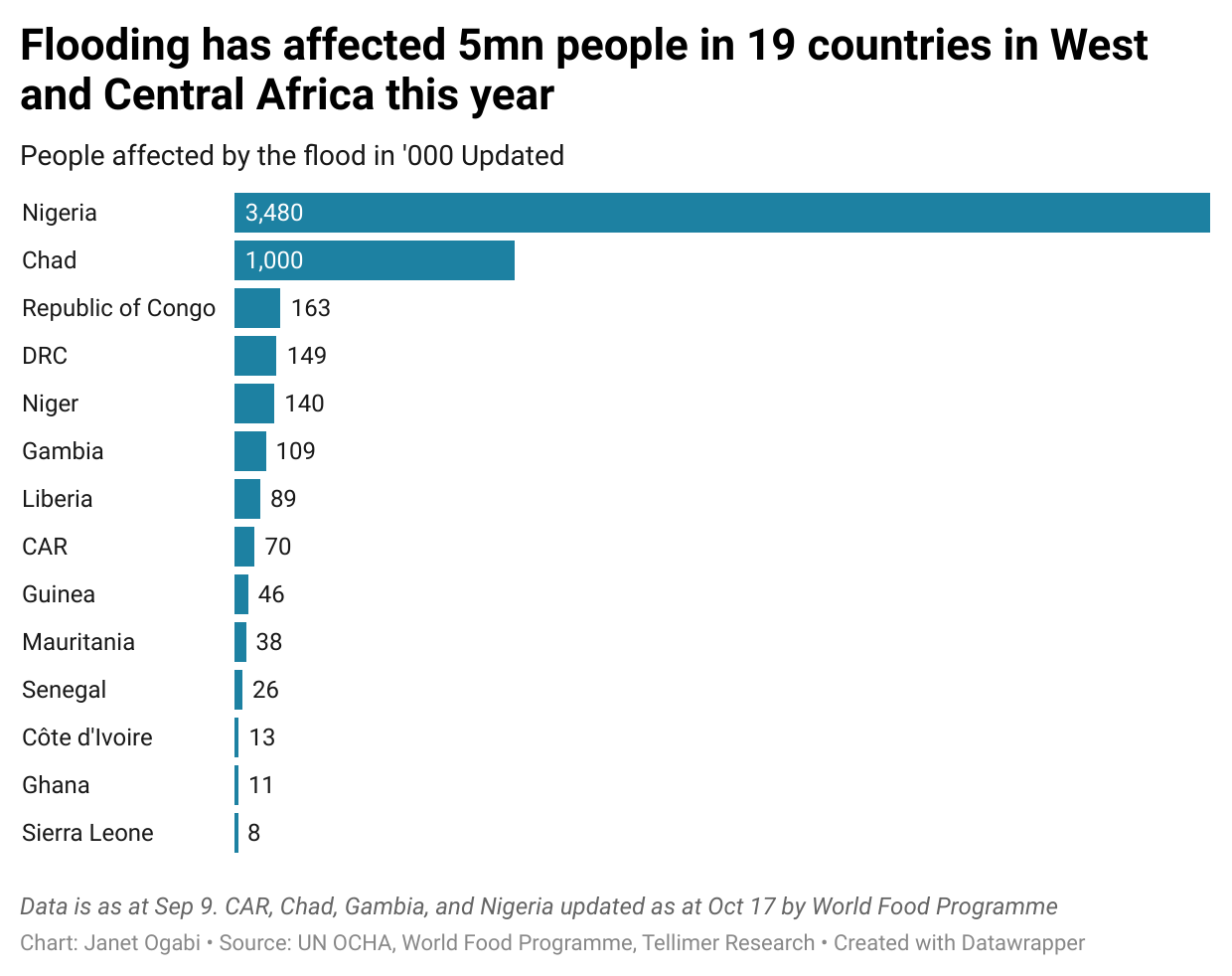 Nigeria is one of the countries worst hit with the floods affecting 3.48mn people in 28 of the 36 states – 1.4mn people have been displaced from their homes and 332,327 hectares of land have been damaged including 108,392 hectares of farmland. This is Nigeria's worst floods since 2012.

The cost of the floods in Nigeria continues to mount – government officials expect the flooding to continue until November – as it significantly impact businesses, farmlands and the economy as a whole. Below, we asses its impact on various sectors in Nigeria and the risks to inflation.

One of the most affected sectors is agriculture, as many food producing states have been hit by the floods. For instance, in Nassarawa (north central) state, Olam – one of Nigeria's biggest agribusiness companies – reported that its 4,500 hectare rice farm has been submerged. This increases the risk of food insecurity as farm yields are likely to decline, further driving up inflation.

Other listed agribusiness companies that could be adversely affected include Nigeria's biggest palm oil producers Okomu Oil and Presco. However, an Okomu Oil representative – on a brief call with this analyst – said that the company's plantations have not been affected by the floods yet.

Cement is another sector where the floods could have a huge impact. Dangote Cement, Africa's largest cement producer, has its largest plant (16mta out of total 35mt in Nigeria and 58mt in all of Africa) in Obajana, Kogi state. Kogi in north-central Nigeria is at the confluence of two of West Africa's biggest rivers – Niger and Benue – making it one of the worst-affected areas. The floods have impeded traffic and blocked major highways in the region, restricting the movement of trucks carrying supplies from Dangote's plant. At the time of writing, a source on the ground confirmed that the flood water is receding from the highways and that vehicular movements have resumed.

We note that the cement sector typically records low demand in the third quarter of the year, due to reduced construction activities during the heavy rainy season. However, the recent floods exacerbate the issue, further dampening demand for cement in the second half of the year.

The floods have also hampered oil & gas production activities as the bulk of Nigeria's oil & gas producing assets are located on riverbanks. For instance, Total Nigeria's OML 58 oil & gas facilities were reported to be submerged by the floods this week.

Meanwhile, on Monday, Nigeria's biggest LPG producer and exporter NLNG declared force majeure on its six-train capacity plant (producing 22 mtpa) because of widespread flooding that has disrupted supply. The company's main feedstock supply had already been limited prior to the floods, due to rampant oil theft in Bonny in southern Nigeria.

NLNG is the largest gas consumer in Nigeria – processing 3.5bn cubic feet of gas daily – and the largest supplier of cooking gas (Liquefied Petroleum Gas or LPG). The latest move by the company will impact local gas supply and prices, which has already spiked 138% since the end of 2020. 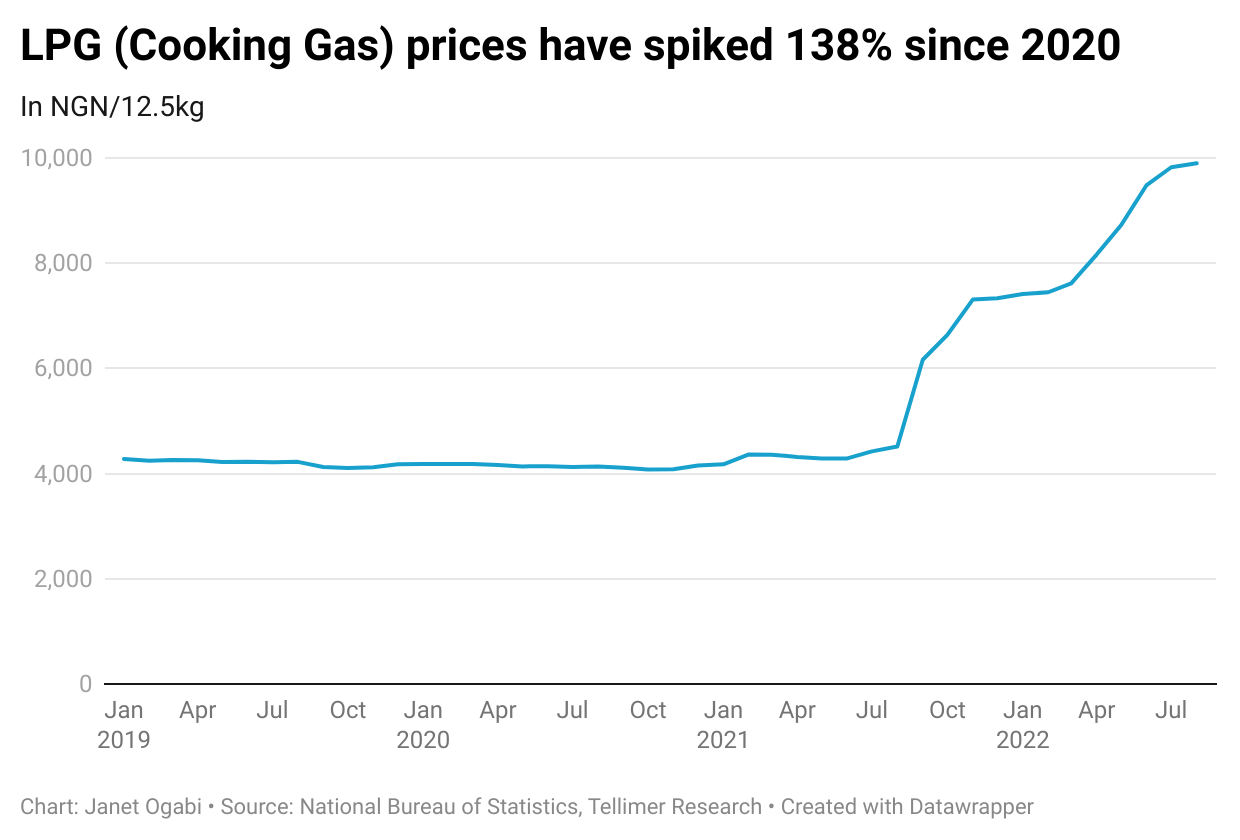 The floods are also likely to delay completion of NLNG's highly anticipated US$10bn seventh train project, which is set to increase the company's total capacity by 35% to 30mtp. The project was reported to have reached 30% completion in August and will be completed in four years.

The disruption at NLNG also threatens gas supplies to Europe and other countries that are currently facing a supply squeeze from Russia – NLNG's LPG makes up 4% of total global supply. 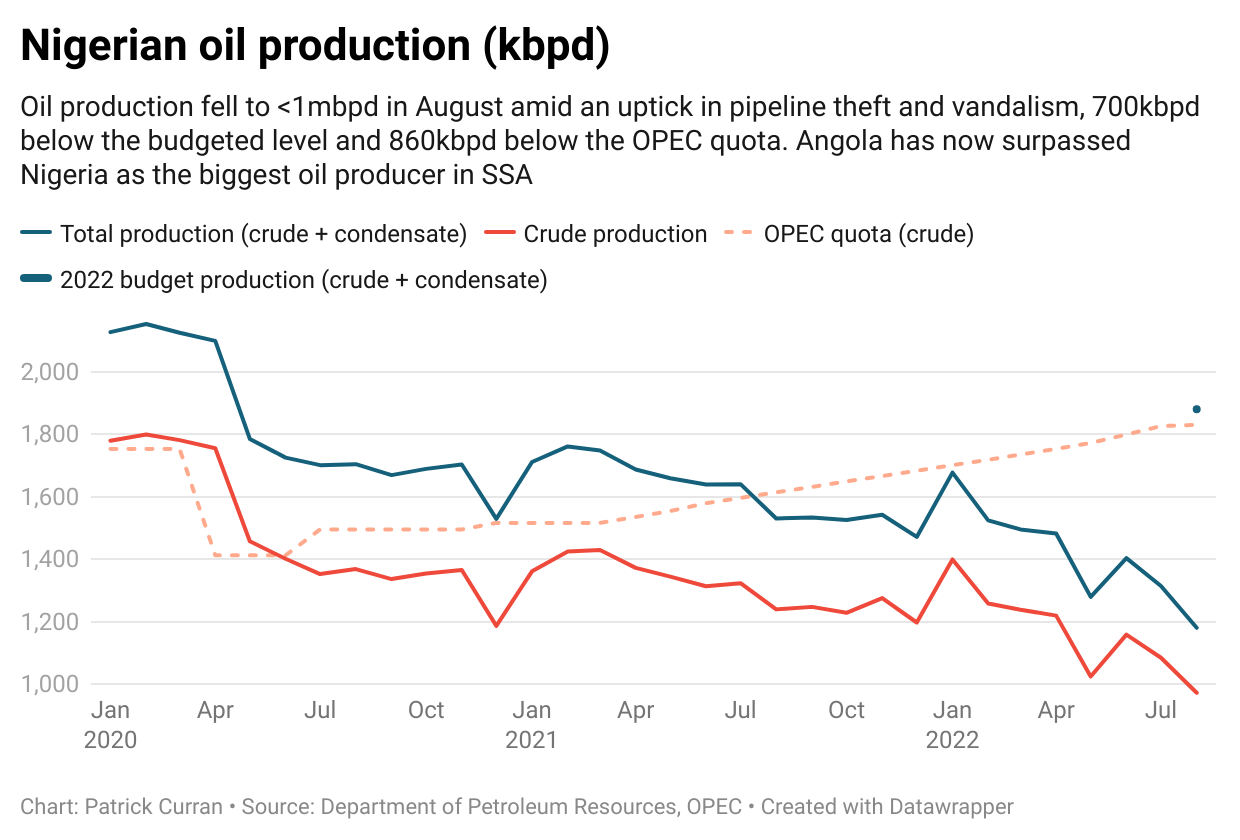 The floods are likely to leave a significant imprint on inflation data when it is released. Inflation for September released earlier in the week shows that the headline and food inflation increased 25bps and 22bps from the previous month to 20.8% and 23.3%, respectively. This is the highest inflation rate since 2005 and the impact of the floods could imply that the increase in prices is yet to bottom out. 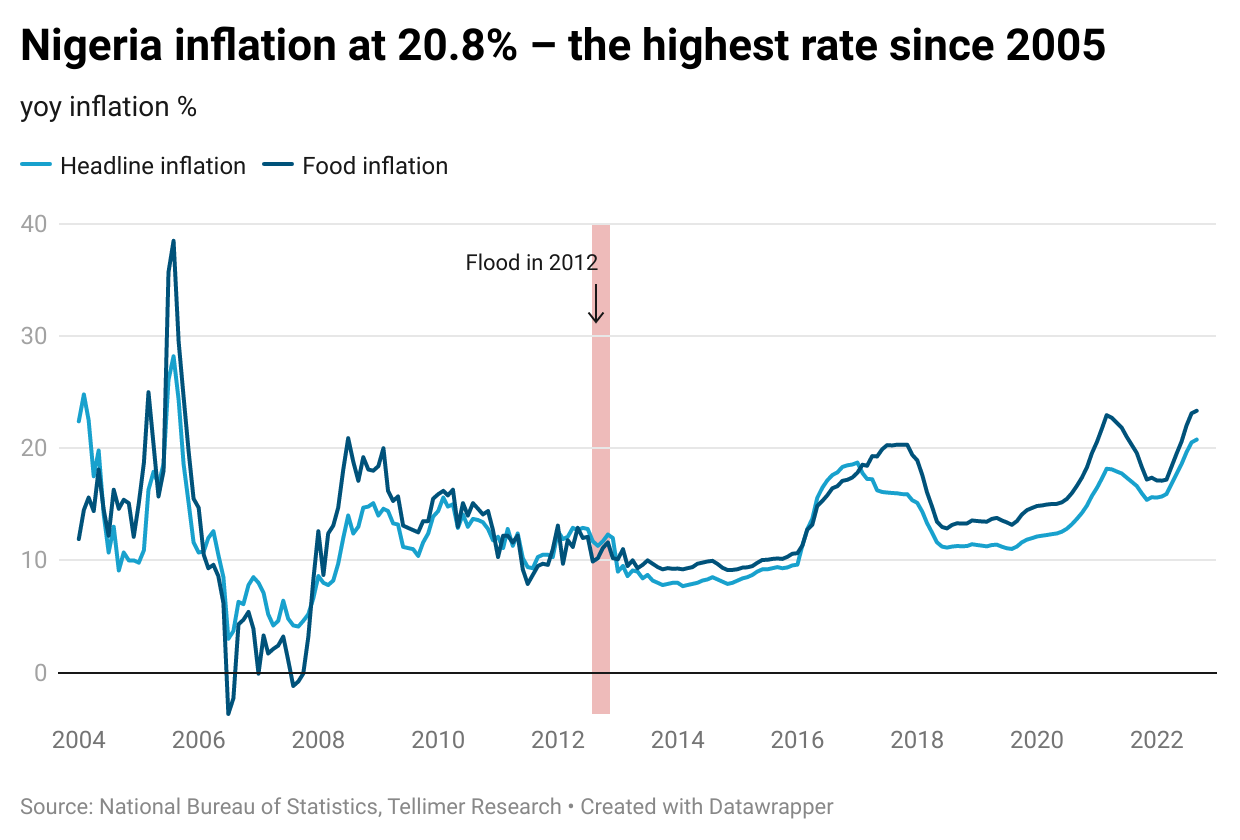 The Famine Early Warning Systems Network (FEWS NET) projects that agricultural production in Nigeria is likely to be even lower than previously expected due to the "heavy rainfall and flooding which have led to crop losses". This means food prices and inflation are likely to rise in the coming months.

However, taking a closer look at the 2012 inflation data during and after the last devastating floods (which occurred from July to November 2012), it is interesting to note that the floods had minimal impact on food and headline month-on-month inflation. According to FEWSNET, this was due to: (1) early crop harvests in some parts of the country, and (2) good crop yields which made up for poor yields in other parts of the country. This implies that if the current crop yields turn out better than we expect during the harvest season, inflation may not be as high.

Nevertheless, it is also worth noting that the floods in 2012 followed a year of intense security challenges in 2010 and 2011, which caused significant volatility in food prices, meaning prices were already very high even before the floods. 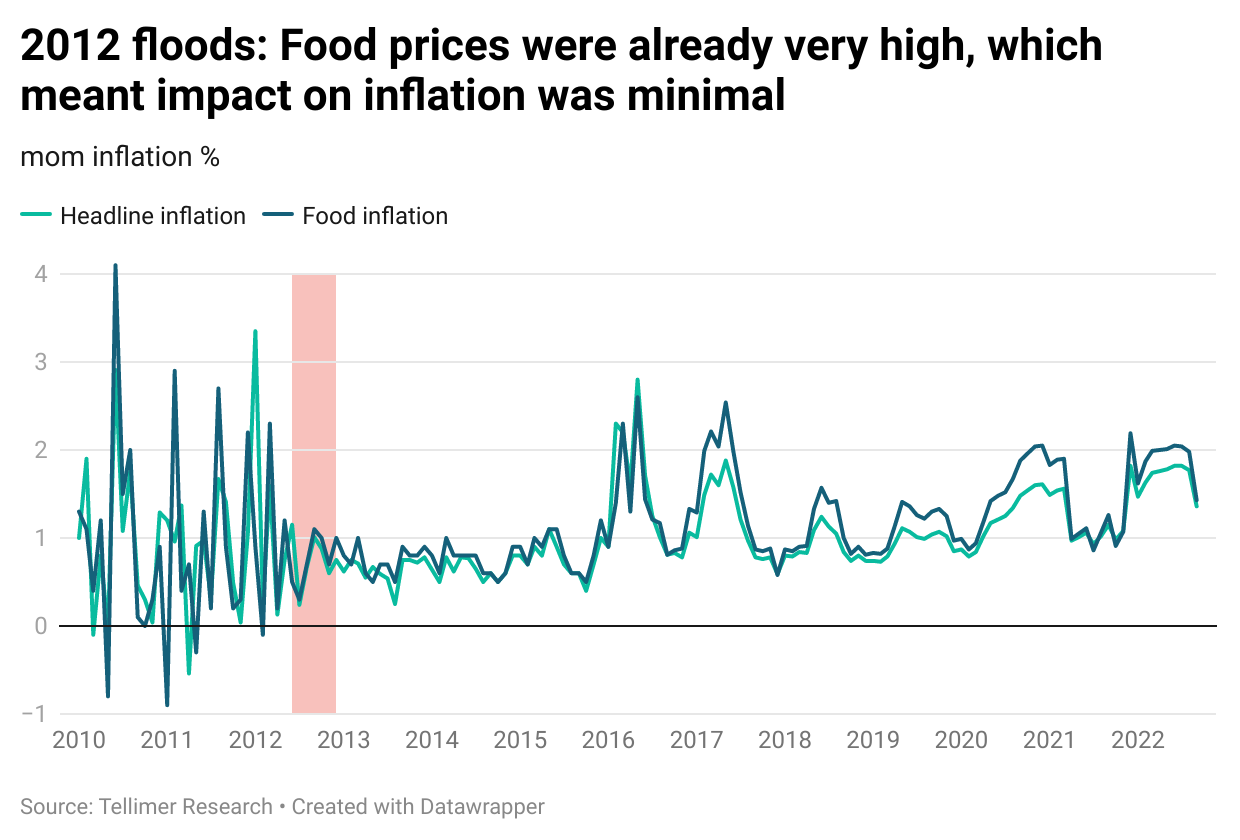 Meanwhile, despite recent hikes by the central bank – a cumulative 400bps to 15.5% ytd – inflation in Nigeria has continued on an upward trajectory (514bps ytd). As a result, real returns have remained in negative territory, and going by FEWSNET's signals and the uptrend in inflation, this is likely to persist for a while.