With the exceptions of China, Malaysia and Vietnam (assuming reported data is accurate in both) all of Asia has struggled with Covid-19 and most of the large population countries have concluded that the poverty caused by long-term lockdowns will cause more deaths than the virus. Bangladesh, India, Indonesia, Pakistan, and Philippines have fared particularly poorly (in all of these a high share of informal labour, extreme urban density and deficient public healthcare have been contributory factors). Better healthcare infrastructure, smaller populations and more developed tracking security apparatus has allowed some (eg Singapore, S Korea) to combat Covid-19 better, but not without encountering second waves of infection.

The outperformers in Asia ytd are Malaysia and Vietnam. Longer-term, both stack up well as potential long-term beneficiaries of manufacturing investments outside China (on the basis of a mix of low costs, support for higher technology, and governance) but the same could be said of Indonesia, which has underperformed along with Pakistan and Sri Lanka. Philippines and Thailand performance sits in the middle of these two groups. 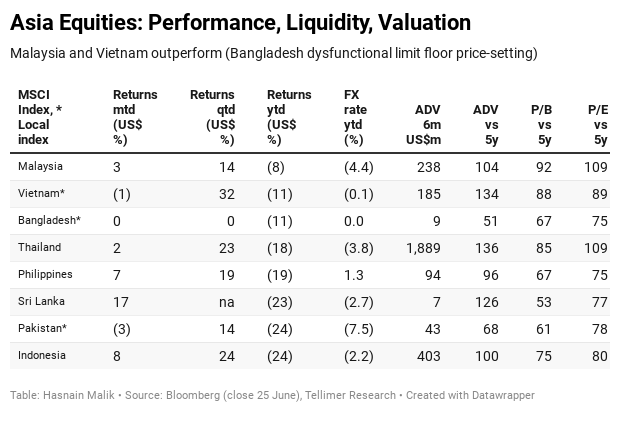 Malaysia: outperforming but fractious politics is getting in the way

Firstly, the domestic political environment has worsened: the change in government (from PM Mahatir to PM Muhyiddin) and the ongoing challenge to the new government’s mandate is causing delays in the reforms needed to escape the “middle-income trap” (better infrastructure, more efficient public procurement, empowering anti-corruption, increasing female labour force participation, and improving the ease of doing business) and increasing the risk of non-Malay ethnic disenfranchisement.

Secondly, most of the external drivers for Malaysia have deteriorated this year: global demand for technology hardware, US-China trade relations, and oil and palm oil commodity prices. Thirdly, valuation, at the index level, is merely close to historic average.

All of these lead us to a cautious view on the outlook for Malaysia equities.

Vietnam: firing on most cylinders but tight FOLs still a constraint

Vietnam has justifiably benefited from a formidably successful healthcare response to Covid-19 (zero deaths, under 400 infections, despite its location on China’s border). Its valuation is still at an approximately 10% discount to historic average.

Given the structural aspects of the investment case are unchanged (sustainable growth in exports, consumption and infrastructure, and a stable FX rate, are the positives, which offset the risks of party leadership succession before the 2021 congress, an ageing population, and sluggish state-owned enterprise reform), Vietnam remains our top country pick among the smaller EM and FM markets in our coverage.

Of course, tight foreign ownership limits (with seemingly little urgency by the authorities to remove them) remain a constraint on fresh allocation of capital to Vietnam by foreigners. The effective foreign available free float of the MSCI Vietnam index is merely 20%.

Philippines: cheap but Duterte’s succession may take priority over reform

Philippines has seen two important developments apart from Covid-19 disruption: the repair (at least temporarily) of relations with the US, evidenced by the delay in scrapping the Visiting Forces Agreement) and the detente in relations between President Duterte and big local businesses.

Philippines shapes up fairly well as a candidate to attract new manufacturing investment, but structural reforms of taxation and infrastructure likely become less of a priority than political preparations for the post-Duterte presidency (which may include establishing a succession path for his daughter Sara, and mayor of Davao City).

Equity valuation is attractive relative to history but a loss of urgency behind structural reform and the increased risk to remittances from the GCC make the Philippines less attractive than other countries in Asia.

Indonesia continues to tick along, adjusting for Covid-19 disruption. President Jokowi is early in his second term but there does not appear to be any greater urgency to implement the upgrade to infrastructure and human capital to accelerate structural growth.

After China and India, Indonesia has the largest labour force in Asia, but burdensome regulation keeps it a fairly inflexible one and the scattered island geography and highly heterogeneous population of Indonesia both inhibits the establishment of competitive logistics and fosters a culture of patronage (which maintains national unity but blocks difficult decisions which might prioritise one community over another).

Low equity valuations relative to history keep up positive on Indonesia, but this is not enough to make it our favourite in the region.

Pakistan’s economic improvement has been derailed by Covid-19 reversing growth (despite large interest rate cuts), widening the primary fiscal deficit (due to lower tax revenues); and weakening the FX rate. While lower oil prices alleviate the import bill, this is offset by greater risk to remittances from the GCC. The silver lining is decelerating inflation and rapidly mobilised external funding (IMF, Asia Development Bank).

Governance reform continues with an unprecedented public investigation into unjustifiable price inflation by the sugar cartel (which has led to a casualty within the most senior echelon of the ruling party, Jehangir Tareen in the PTI – something unthinkable under previous civilian or military governments) – and restructuring of state-owned enterprises (eg Pakistan Steel Mills).

While military friction continues at the Indian border, the confrontation between China and India is a reminder that there is an overall balance of power which constrains both sides.

Pakistan is still cheap enough and economic policy, including FX rate flexibility, is sensible enough to merit an investment case based on structural improvement in governance (a root cause of corruption, economic short-termism, and insecurity) and infrastructure (China-Pakistan Economic Corridor).

Sri Lanka’s fiscally looser turn under the leadership of the Rajapaksas appears to be costing it timely assistance from the IMF. Although external obligations should be met, the delayed election (from April to August) means the parliamentary passage of the budget (which may need the Rajapaksas to establish an outright majority and on which a new IMF program may be contingent) is also delayed. Although Sri Lanka equities are cheap, the banks may struggle to expand credit.

The market finally re-opened after over a two-month hiatus blamed on Covid-19 (but more likely driven by politically protected local high net worth and institutional vested interests seeking to avoid margin calls on marked-to-market portfolios). However, the mechanism for setting the limit-down share prices at artificially high levels remains and this prevents sizeable liquidation by foreign institutional funds (which, in turn, means that the depth of the FX market to support repatriation is not tested).

This adds to the ever more ad hoc, unfriendly to business, and kleptocratic policy record of the Awami League: eg targeting of Grameenphone back taxes and new products, the lending rate cap in banks, taxes on formal tobacco, delayed pharmaceutical price increases.

The fig leaf of garment export growth, which hides these defects in the investment case, has also been removed: garment exports were in decline prior to Covid-19 disruption (falling 6% yoy in 2H CY2019 before accelerating to a 14% yoy drop for the 10 months to April 2020).

This is an extract from our detailed EM Strategy overview published on 28 June.