ASEAN abandoned in the foreign rush to China and India; revisit in 10 charts

It may be time for Asia emerging market veterans to revisit some of their old haunts. Below, in ten charts, we illustrate the foreign evacuation from ASEAN equities and the opportunity this presents. 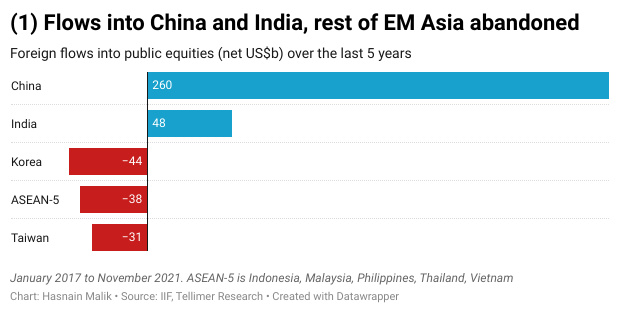 A cohort of investment professionals who built their careers in ASEAN equities have been pulled to China and India. Even the attention paid to Korea and Taiwan may have shrunk to the global tech sector alone.

The East Asia tigers in ASEAN were applauded for their embrace of capitalism, democracy, and US foreign policy in the 1990s, then ridiculed for their excessive debt, crony capitalism, and contagion after the 1997 Asian Crisis, and then celebrated again for their macroeconomic repair after the turn of the century.

But for the last few years they have been evacuated and now largely ignored by foreign equity investors. Foreign equity funds flow into the ASEAN markets of Indonesia, Malaysia, Philippines, Singapore, Thailand and Vietnam, collectively, have been negative for each of the past five years.

That is striking given the growth of the overall EM equity assets under management over the same time period has been at least 10%. It appears as if almost all of those net inflows into the asset class have been deployed in China and India.

Even the late ASEAN bloomer, Vietnam – everyone’s favourite (or only) frontier market and "China plus one manufacturer" play – has seen foreign outflows over 2020 and 2021. 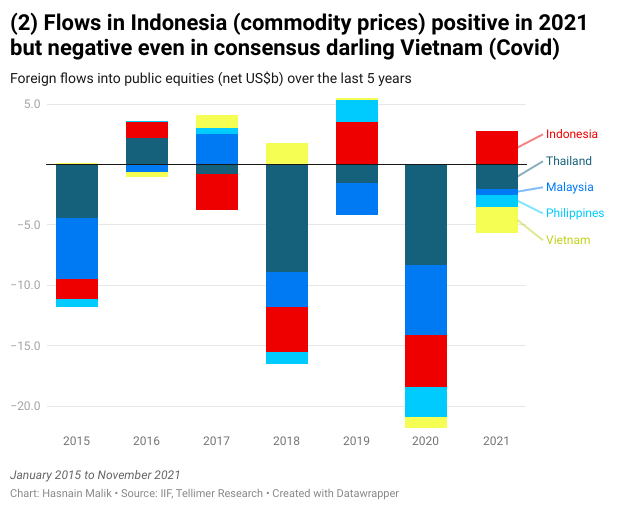 It is fair to say that the typical EM fund manager now pays little attention to equities exposed to a population of almost 600 million (2.8x the size of Brazil and 40% the size of India) and US$3.2trn of nominal GDP (2x that of Brazil and almost 10% larger than India), and with a weighted average per capita GDP growth rate over the next five years of 7.1% (the same as Brazil, only slightly lower than India's 7.4%, according to IMF forecasts).

The fundamental reasons for this, common to most of ASEAN, have been slowing growth across the board, shrinking current account surpluses to deficits in some cases, slowing momentum in structural reform, and the exposure to greater foreign policy risk as friction between the US and China has escalated.

This has been exacerbated by the tides of EM benchmark index weights which have seen the importance of these markets to Asia ex-Japan and global EM equity portfolio managers dwindle. ASEAN currently has about a 5% weight MSCI EM, compared to closer to 8.6% five years ago. In the same time India's weight has gone from a similar starting point to over 12%. 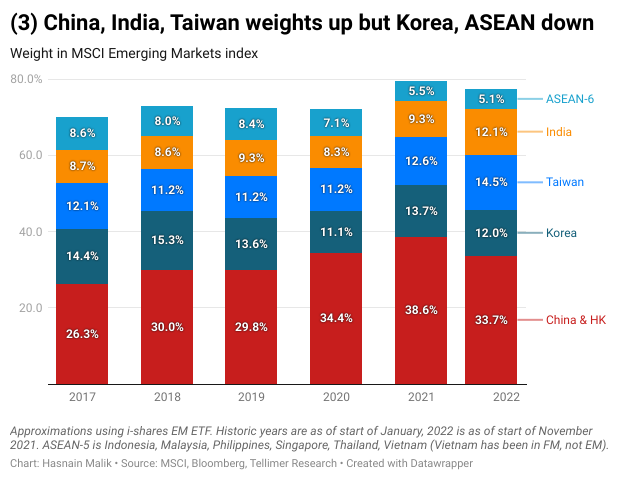 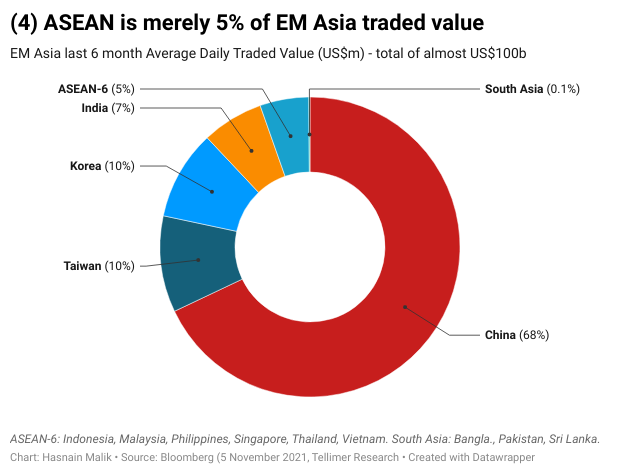 And within this small pool of liquidity, Thailand, Vietnam, and Indonesia account for 80%. 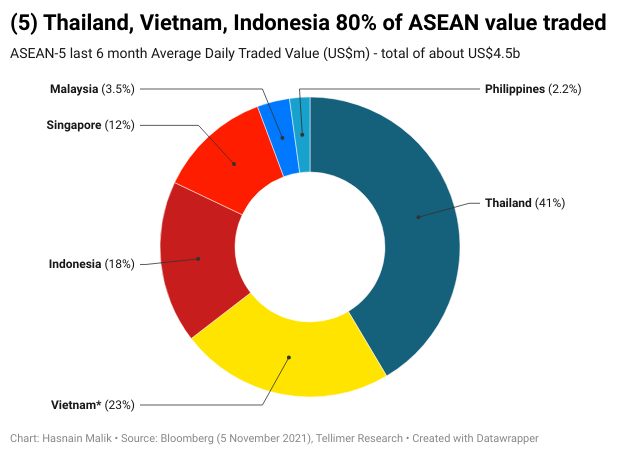 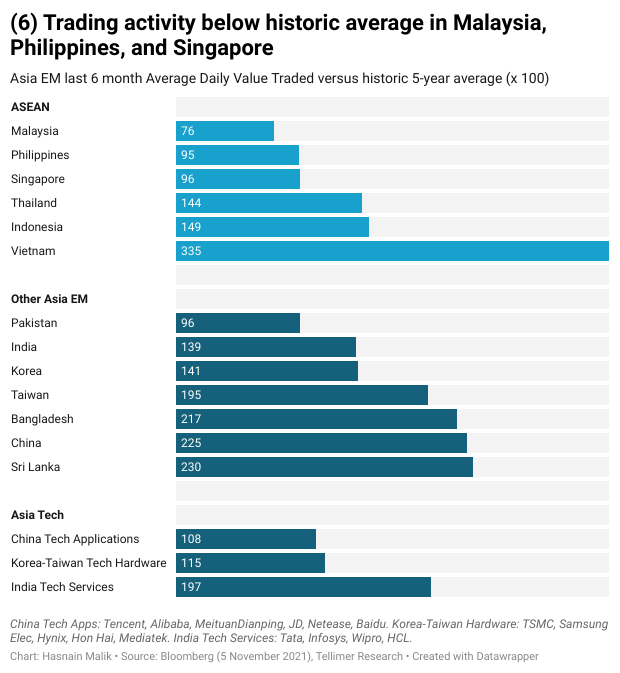 Yet there is cause for optimism over the resilience and remaining potential for ASEAN.

In a world that is gradually normalising post-Covid, ASEAN has commodity exports, domestic consumption, manufacturing exports and tourism exposure that should turn into fundamental economic tailwinds. Per capita income growth forecasts (IMF) for the ASEAN countries compares favourably with the rest of EM Asia. 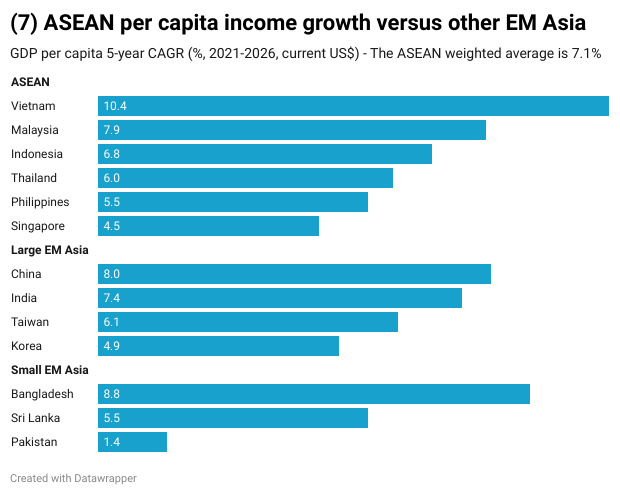 Even where domestic politics is fractious, eg Malaysia and Thailand, it is not enough to derail the economy or economic policy as it is in other parts of EM, such as Brazil or South Africa. Post-Covid, fiscal deficits are high in ASEAN, ex-Singapore ranging from -3.4% to -6.2% for 2022 on IMF forecasts, but this is significantly less than those in Brazil, China, India or South Africa. For all the drama of politics in ASEAN, there is very little disagreement over the need to adhere to orthodox economic policy.

And even where shrinking current account balances have turned into deficits – eg Indonesia (1.0% in 2022, according to IMF forecasts, which is similar to South Africa) and Philippines (1.8%, which is similar to Brazil) – they are hardly of a scale to warrant the sort of FX rate risk associated typically with smaller emerging and frontier markets. 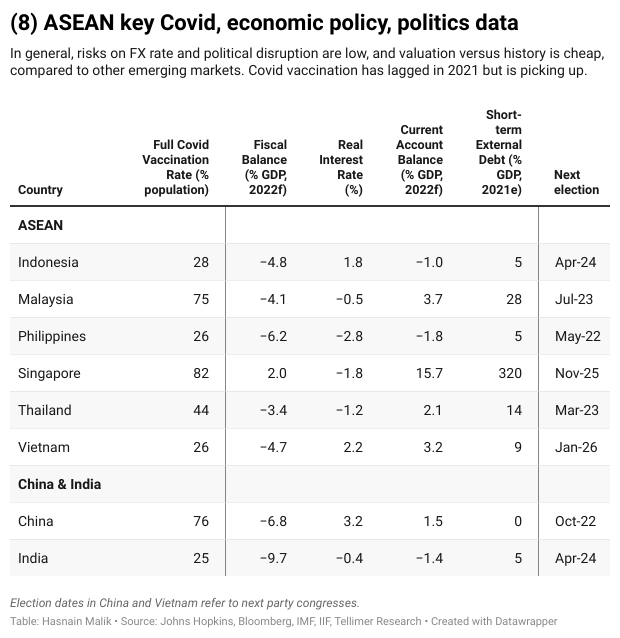 In terms of geopolitical risk, as the US and China compete, there is an opportunity for ASEAN to benefit both from closer security cooperation with the US, particularly in the aftermath of the Afghanistan withdrawal, and closer trade and investment integration with China, particularly as RCEP comes into effect.

With ASEAN markets generally looking attractive on valuation versus history, all of this suggests a revisit is in order. 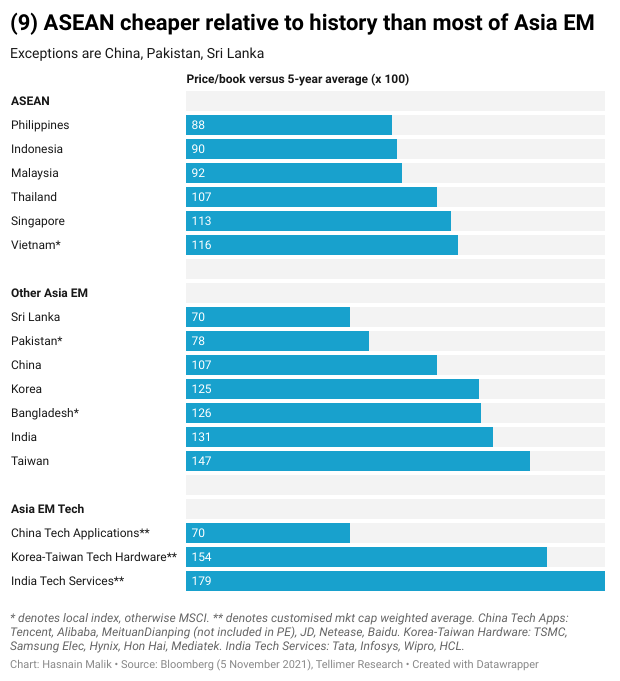 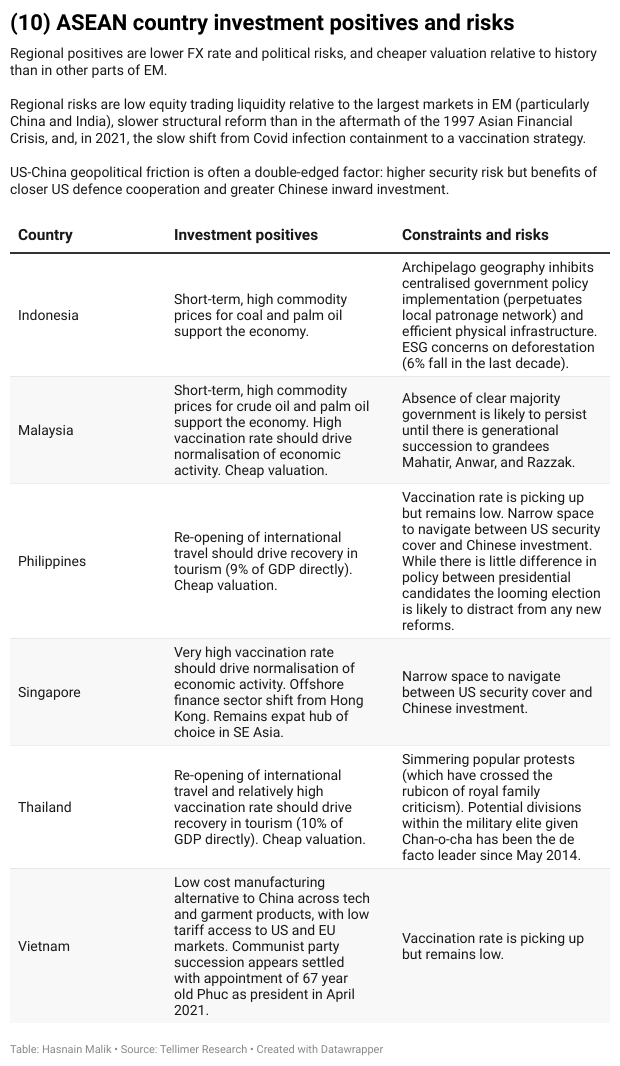 The data in this report is included in the full version of the Tellimer Emerging Markets Investability Matrix.

Malaysia's new PM is not a fix for dysfunctional politics, August 2021

US allies in Asia-Pacific do not need reassurance, August 2021