Crude oil prices are at their highest since 2018 as economic activity picks up globally while OPEC regulates market dynamics. Simultaneously, key energy bodies like the IEA (thanks to their report in May) have called time on oil if the world is to meet the target of zero overall emissions of carbon dioxide by 2050, as laid out in the 2016 Paris Agreement.

Saudi Arabia, OPEC’s kingpin, may have dismissed the report’s call for an end to oil and gas investment as nothing but a "sequel to La La Land", but the clamour for cleaner energy is growing. 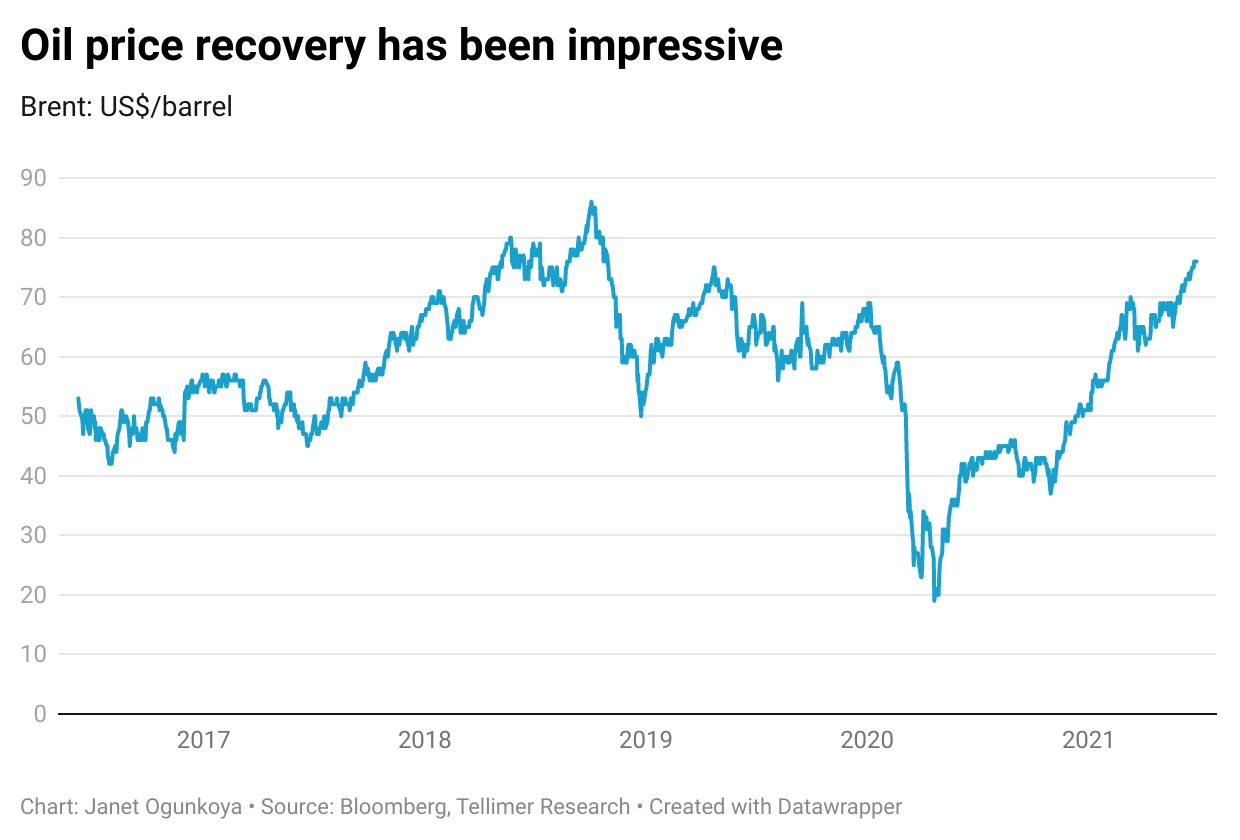 International Oil Companies (IOCs, also oil majors) are facing pressure – both in the boardroom (Exxon and Chevron) and courtroom (eg. the court ruling against Shell's climate impact) – to speed up the transition to cleaner energy.

In addition, in a bid to speed up cash payback to shareholders, IOCs have had to cut capex plans for oil exploration and production. Globally, we have seen an accelerating decline in the IOC’s oil and gas capex. However, the reserves and production data presented in the charts below show that African oil-producing countries are some of the worst affected.

The likelihood that IOCs could exit (fully or even partially) Africa poses a severe risk, not just to the leading oil-producing countries but the continent's economy at large. Two reasons why Africa could be particularly hard hit are:

1) Exploration and production activities are carried out by the IOCs

Most of the continent’s exploration and production activities are carried out by IOCs. Meanwhile, Africa’s upstream oil market has proved to be less competitive over the years compared to other markets, considering the relatively higher cost of production and higher above-ground risk – including regulatory, political, security, and environmental risks.

As the IOCs refocus away from fossil fuels and towards lower carbon production, Africa is likely to suffer upstream divestments and a pullback in project startups sooner and faster than other regions. 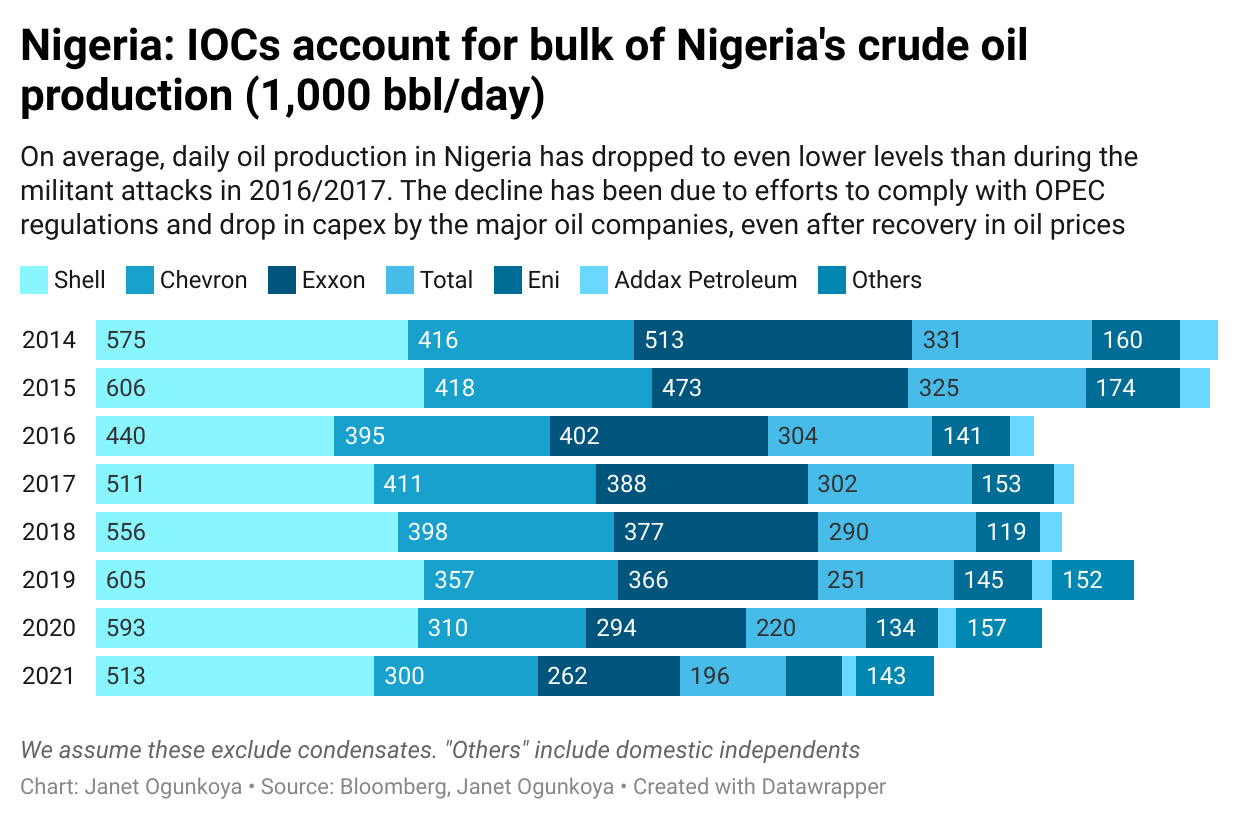 2) Oil exports make up over 30% of Africa's goods exports

Of the total US$371bn in goods exports recorded from Africa in 2020 (down from 2019's US$477bn), US$110bn (c30%) were oil and gas exports. Over 60% of these oil exports are from Nigeria (US$31bn, CBN), Angola (US$23bn) and Algeria US$21bn), according to data from the International Trade Centre (ITC). In these three oil-producing countries, at least 90% of their goods exports is oil. The high sensitivity to oil makes their external balances vulnerable. For instance, despite the impressive recovery in oil prices, Nigeria's trade deficit in Q1 21 was still negative. 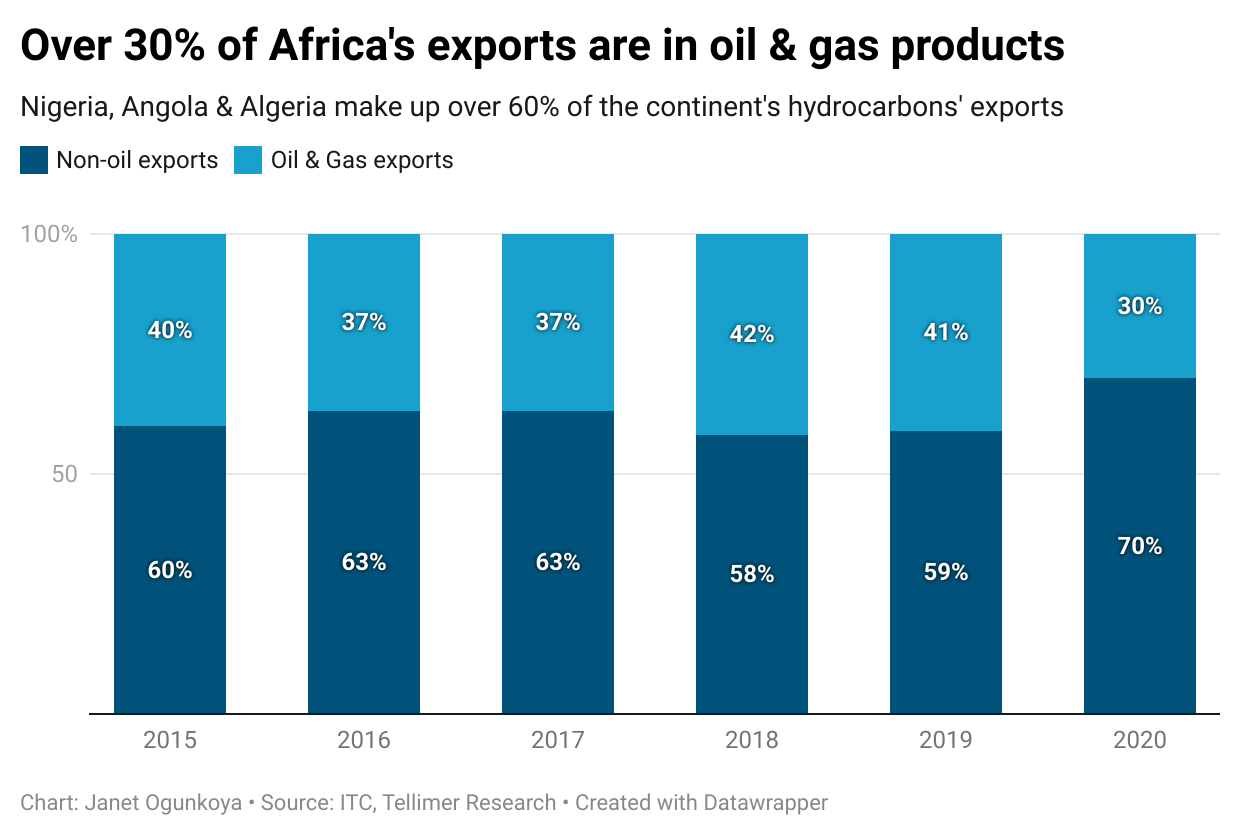 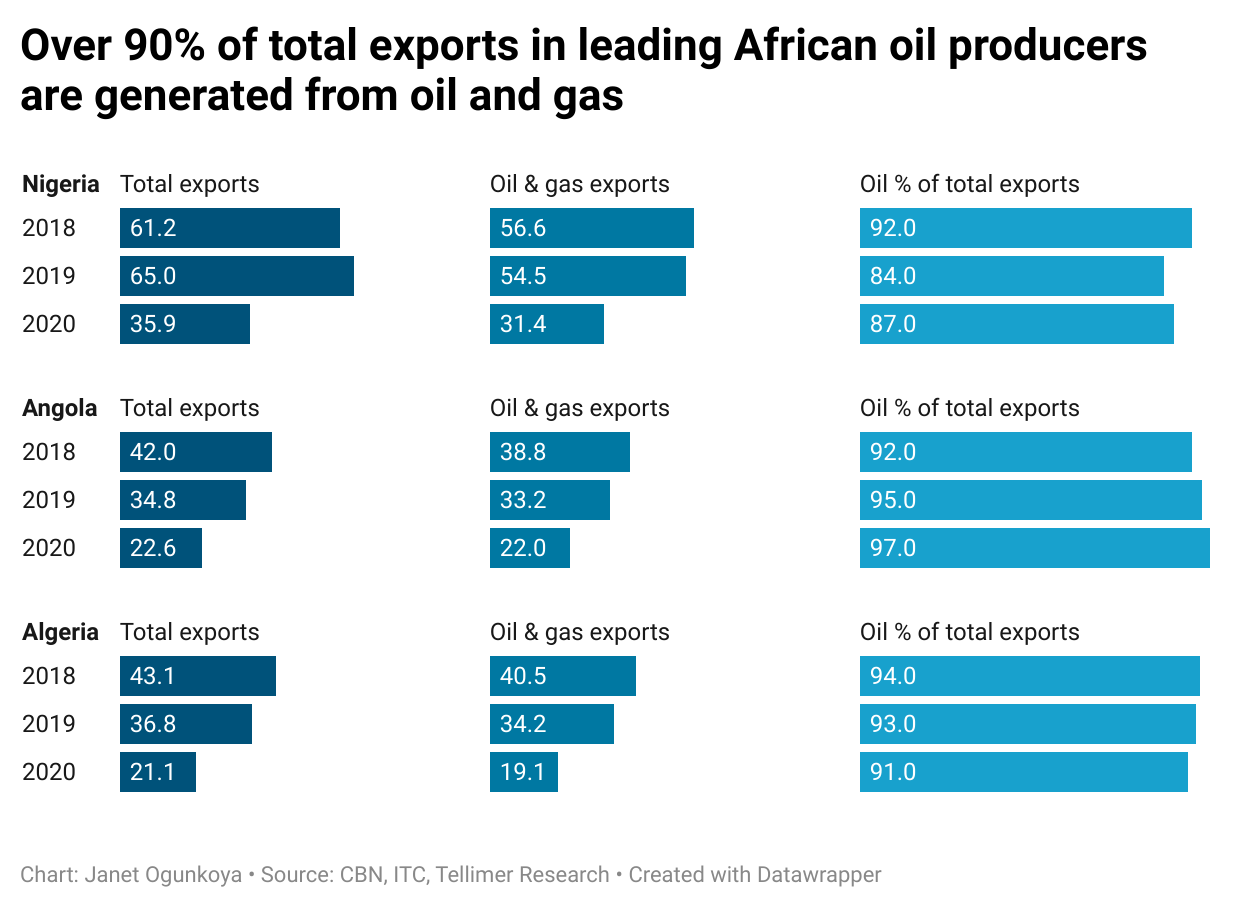 Africa could lose over US$25bn in oil and gas investments

In November 2020, IHS Markit estimated that Africa’s upstream sector could lose up to US$25bn in upstream investment by 2022 (US$20bn in 2020 and 2021). While the bulk of the lost capex in 2020 was clearly due to Covid, there is also a marked shift towards low-carbon-emitting and lower-breakeven projects.

The investment reductions mentioned in the 2020 report are likely to be even greater today, considering the recent pressures on IOCs.

Notable IOC exits across Africa so far in 2021

In 2021, there have already been several notable exits, slowed capex inflows and halted projects from the IOCs across Africa. Some of the major oil and gas exporters affected include Nigeria, Angola and Mozambique. In Nigeria, Shell (the largest producer) is in talks with NNPC to exit its onshore portfolios (but is still interested in offshore blocks) and Chevron completed the sale of its stake in some shallow water blocks.

In Mozambique, Total declared force majeure on its highly anticipated US$20bn LNG project, while Exxon and Eni delayed approval of the US$30bn Rovuma LNG project. Meanwhile, Angola continues to struggle to secure enough capex to make up for the natural declines in its offshore assets.

Despite these exits and delays, there has also been some interest in unexplored opportunities across the continent, including in Tanzania, Uganda, Gabon and Namibia. We will cover these opportunities in a follow-up article.

This creates an opportunity for local growing independent producers in Africa

As the IOCs exit globally, this creates opportunities for state-owned companies and other oil companies. Unlike other top oil producers like Saudi Arabia and Russia, where their respective National Oil Companies (NOCs) are entrenched in the exploration and production (E&P) of their hydrocarbons, most NOCs in Africa are less active in E&P.

Instead, growing local independents such as Seplat are likely to be the main beneficiaries in Africa (and especially Nigeria). We will identify more of these companies in a follow-up article.