Arion Bank has led its European and emerging market peers in returning capital to shareholders; the 2021 figure was ISK31.5bn buybacks and dividends, equivalent to 20% of market capitalisation at the beginning of that year. Management has committed to reaching its medium-term CET1 target of 17.0% (versus 19.1% at Q1 22), meaning that further capital release is likely.

The much-delayed sale of the Valitor payments business was confirmed on 30 June, meaning an ISK5bn capital gain will be recorded in the Q2 results. The sale reduces Arion’s risk exposure, meaning that ISK11bn capital (or more) will become available for distribution. Arion has already made an application for an ISK10bn buyback, but follow-on transactions will be needed to hit the 17% CET1 ratio target.

The main risk to this view would be a sharp deterioration in the credit quality, which could put management’s 13% ROE target at risk and drive the central bank to block further capital distributions on prudential grounds. Although the macro environment has certainly become more challenging, and higher interest rates increase the potential for borrower distress, we view such a scenario as highly unlikely.

Central bank hikes again; the housing market is firmly in its sights

On 22 June, the Central Bank of Iceland raised its benchmark rate by 100bps, to 4.75%. The Monetary Policy Committee noted that GDP growth in Q1 22 was faster than previously expected and that severe labour shortages were being encountered. Inflation was 8.8% in May and inflation expectations have risen. Accordingly, the central bank believes further tightening will be needed.

Earlier last month, the Financial Stability Committee had noted that a key danger was unwarranted risk appetite and excessive loan growth. It noted that real estate prices had grown strongly, and accordingly, had tightened some mortgage eligibility criteria. Banks’ countercyclical buffer will rise from 0% to 2.0% in September, as previously announced.

For Arion Bank, these steps will prove supportive for its net interest margin. The bank has indicated that a 25bps rate hike translates to an annual ISK100-200mn boost to the top line (less than the ISK200-250mn benefit it had guided towards at the beginning of the tightening cycle, as competition for funding intensifies). However, mortgage lending, a key growth driver in the past, will likely suffer, making corporate lending the bank’s sole credit growth engine.

The central bank published its economic indicators on 30 June. We highlight below some of the key elements from this report.

Headline CPI stands at 8.8%, but looking at inflation over the past three months takes that number to an annualised 12% rate. Housing is one of the critical drivers of this growth, with costs rising 17% yoy, close to the 2017 peak rate of 19%. Rising house prices (up 23% yoy) are a major cause of this inflation, driven by a shortage of supply.

Nevertheless, Iceland's inflation rate may be better protected than in mainland Europe. This is because its economy is less affected by the surge in oil prices due to its plentiful geothermal energy. 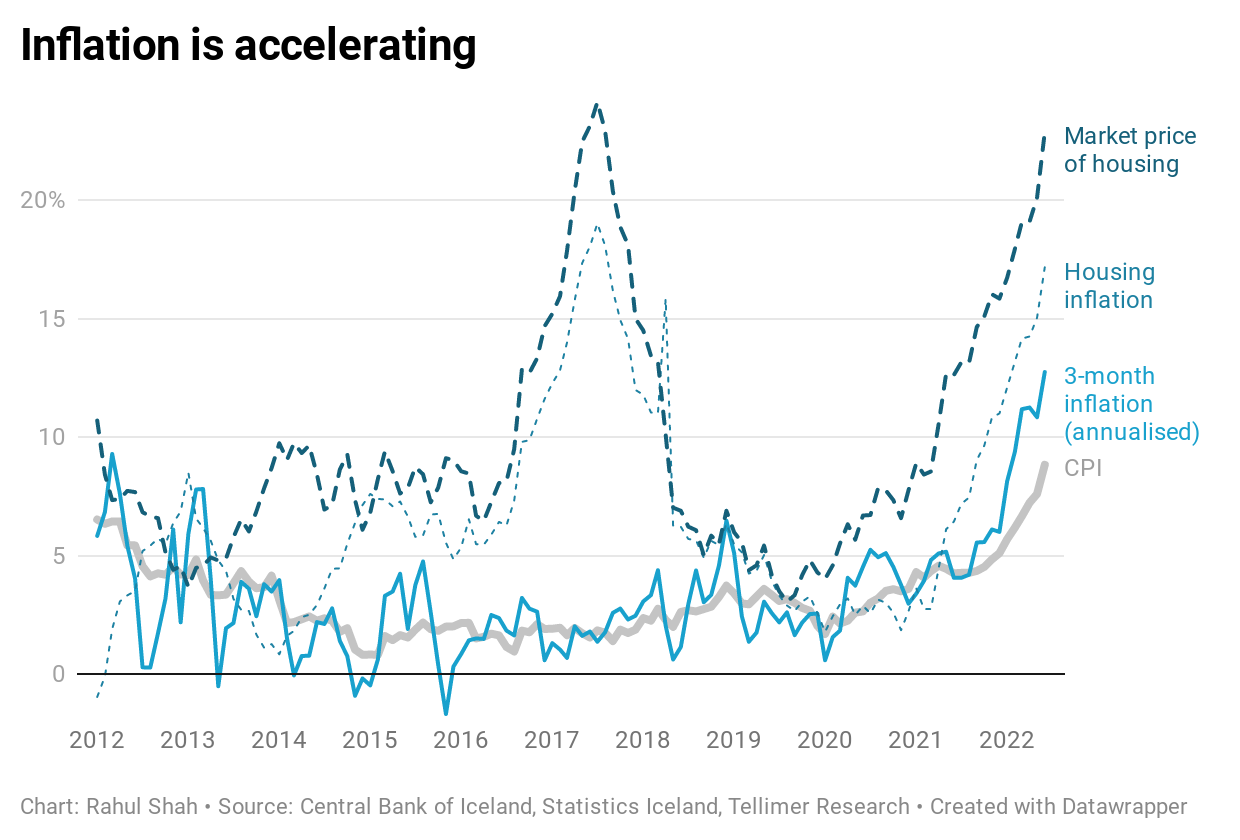 Private consumption growth is running at 9% yoy, with payment card turnover also growing strongly. The slowdown in mortgage lending could well see private consumption growth slow over the coming months. Gross fixed capital formation is also robust (20% yoy), driven by private businesses, and is consistent with the strong growth in corporate lending that Arion is experiencing. 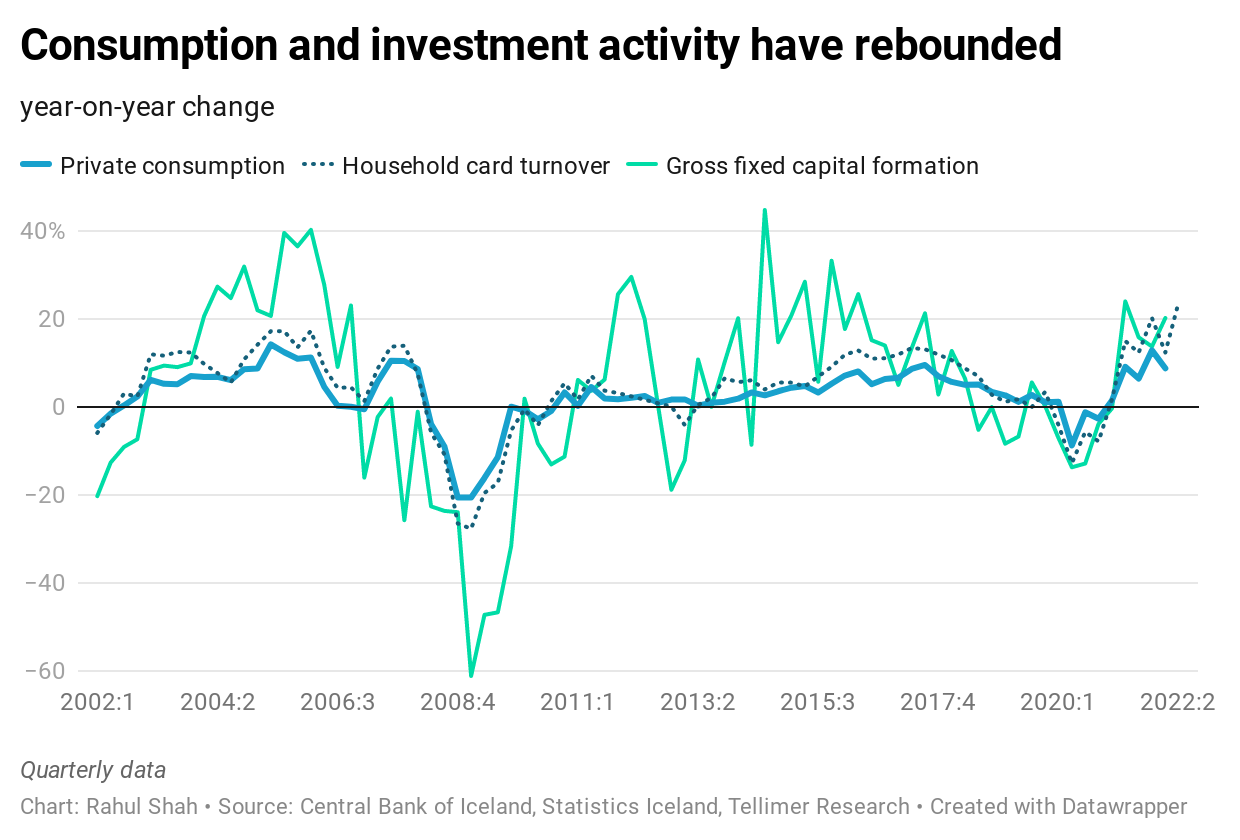 The unemployment rate has fallen sharply

The number of employed individuals has increased by around 9% over the past year, helping the unemployment rate decline from a peak of 11.3% in Q1 21 to 5.1% in Q1 22. This is still above the trough of 1.9% reached in Q3 2017 and the 0.8% level of Q4 2007, when the economy was overheating. The labour participation rate has bounced back to 81% and the employment rate to 77%, both of which are within normal historical ranges. However, the proportion of firms that see themselves as short-staffed has climbed to 54%, back to 2007 peak levels. Wage inflation is currently running at 7.2%, in line with the 7.0% average of the past decade. 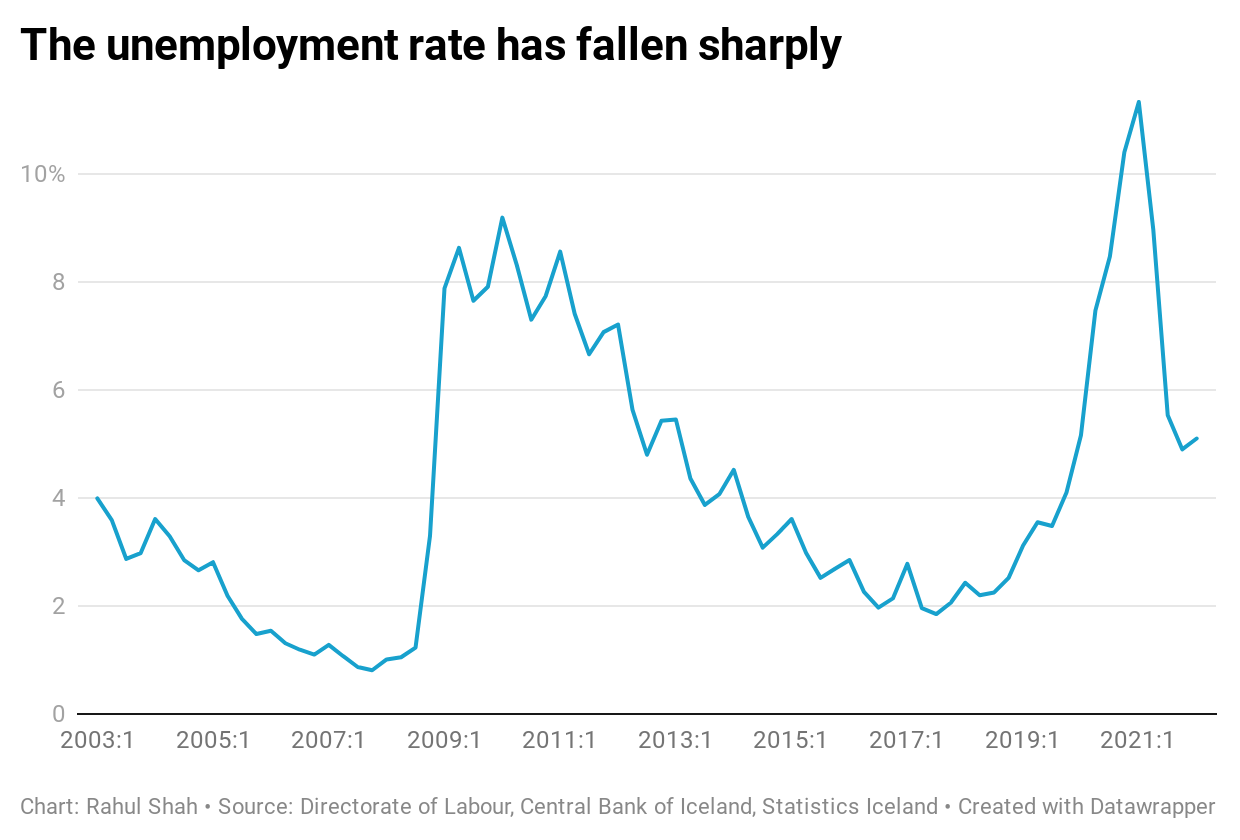 Growth in lending to households peaked at 11.5% in May 2021, the highest level since 2008. The current growth rate stands at 9.9% yoy and is likely to decline further as mortgage volume growth slows due to higher interest rates and tighter selection criteria. In contrast, corporate credit growth was 2.1% yoy in April 2022, well below the post-2008 peak of 15.6% that was reached in November 2018. Household and corporate debt stands at a combined 154% of GDP, the lowest level in the past two decades and well below the 2008 peak of 344%. 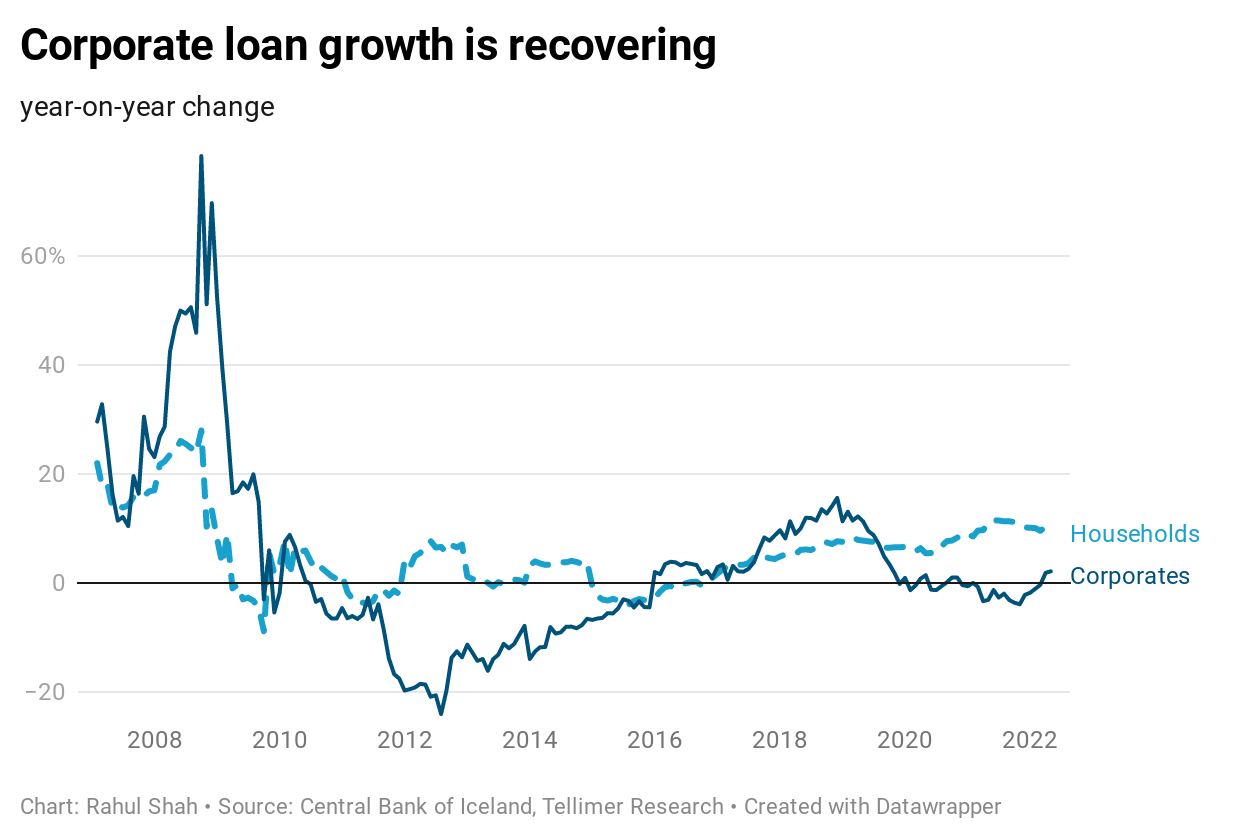 Corporate deposit volume is growing 32% yoy, the highest level since 2009. Since last year, the contribution of foreign currency deposits to this growth has increased. Household deposits are growing at a more modest 6% yoy. 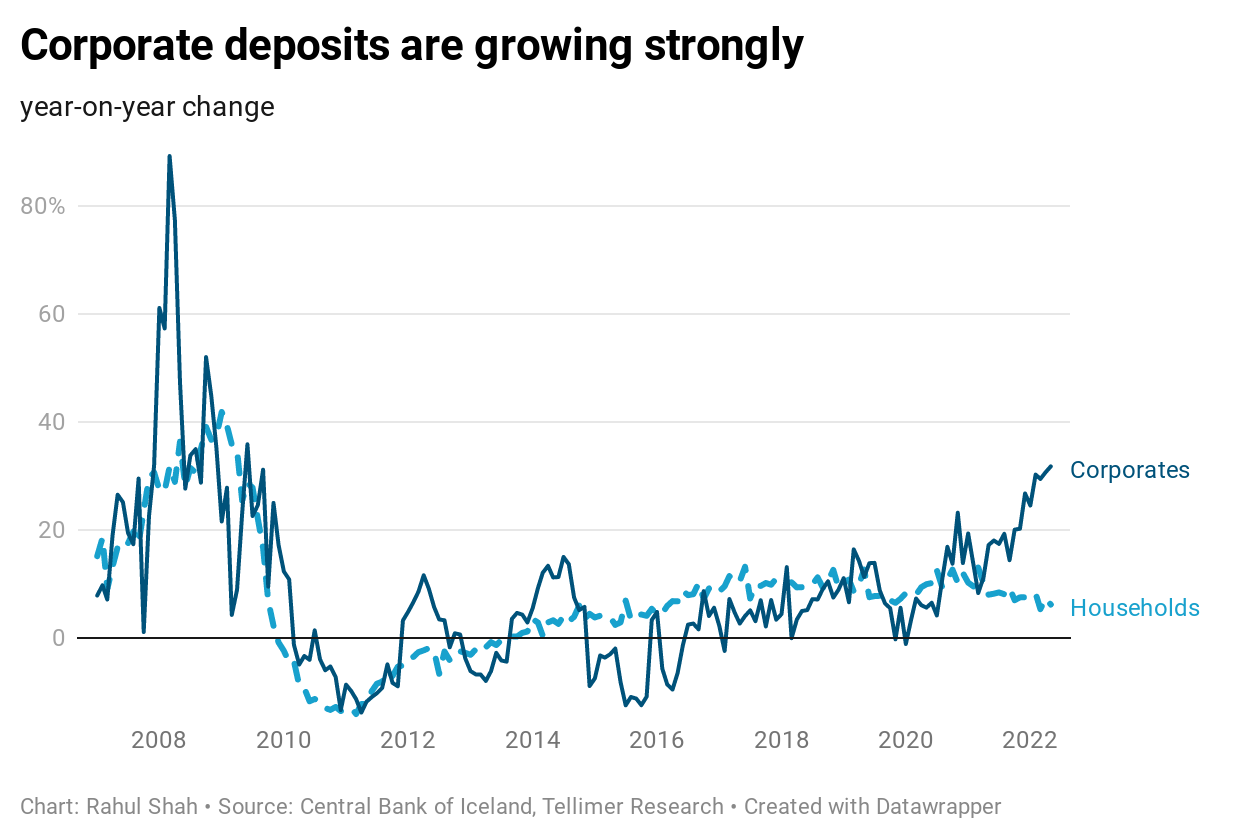 Sentiment has started to deteriorate

Both businesses and individuals feel less positively about the near-term outlook than they did several months ago, which likely reflects the impact of monetary tightening and the more challenging global environment. 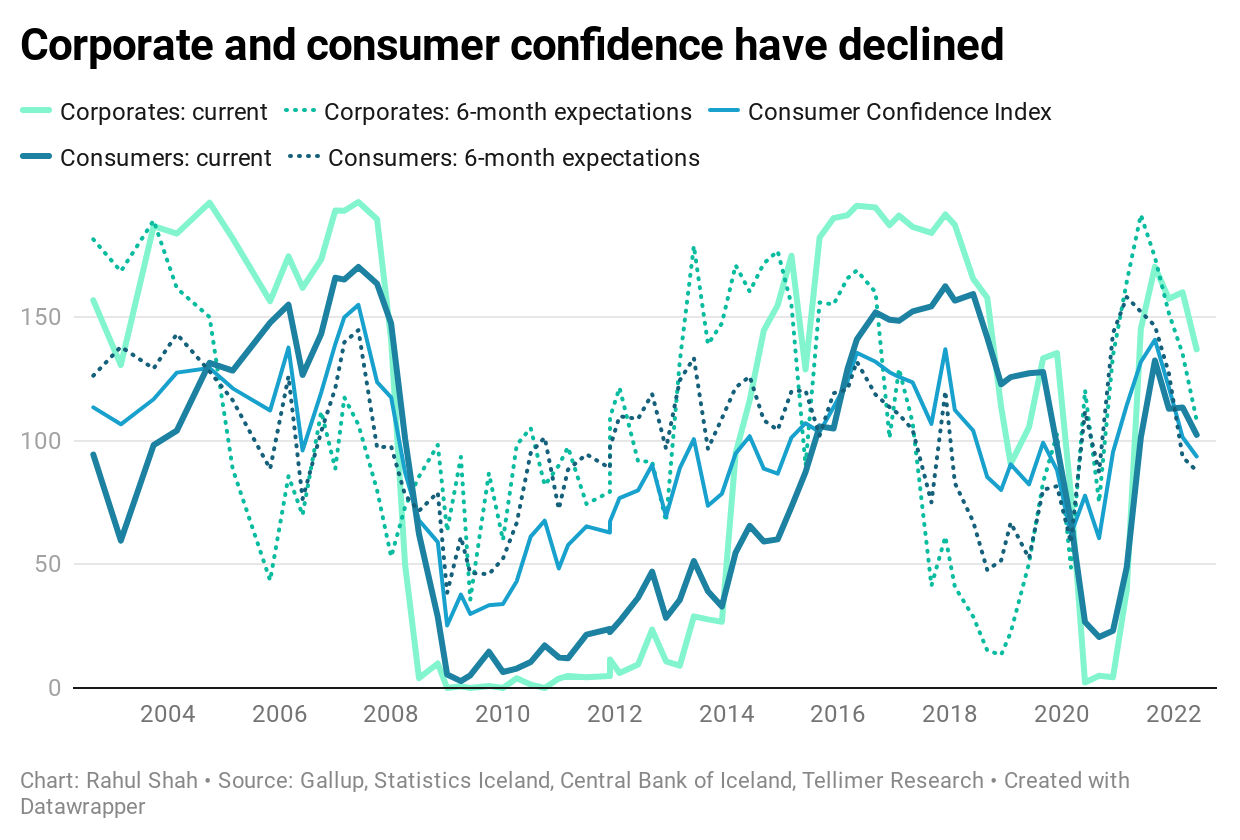 Arion Bank is scheduled to reports its Q2 22 results on 27 July. We highlight some of our key expected trends below. For our longer-term forecasts, please see our previously published report.

Net interest income is likely to be robust, reflecting the margin-supporting rate hikes that have taken place and continued strengthening corporate lending, which should more than offset sluggish mortgage trends.

Fee income should also be strong, buoyed by high payments volumes and good corporate finance activity. However, asset management revenues are likely to be soft and mortgage fees will also be a drag on growth for this revenue line.

Financial income is likely to come in negative, due to a confluence of weaker performance from both equities and fixed income.

Insurance income was weak in Q1 22 due to a higher incidence of claims. Although Q2 tends to be seasonally stronger, claims could once again affect this line item negatively as activity levels recover post-pandemic.

Operating costs should remain well-controlled. One potential area of upside surprise is a recent ruling that means banks no longer need to contribute to the deposit insurance fund, as its reserves are deemed sufficiently large. This should save around ISK135mn per quarter, but we have assumed that Q2 22 results will not benefit from this change, due to timing uncertainty.

The economy performed strongly in Q2 22. However, as the central bank’s intention is to slow credit growth, loan quality is likely to deteriorate as some borrowers struggle to cope with higher financing costs. Although we think it is still too early in the cycle for any material defaults to be recorded, we think Arion Bank may take a conservative approach to its credit risk provisions, meaning that risk costs could rise slightly qoq, to around 21bps of loans.

We project a much higher effective tax rate than in the past due to the weak financial income line (equity capital gains are not taxable). The bottom line will also be boosted by ISK5.5bn gains relating to the Valitor disposal. 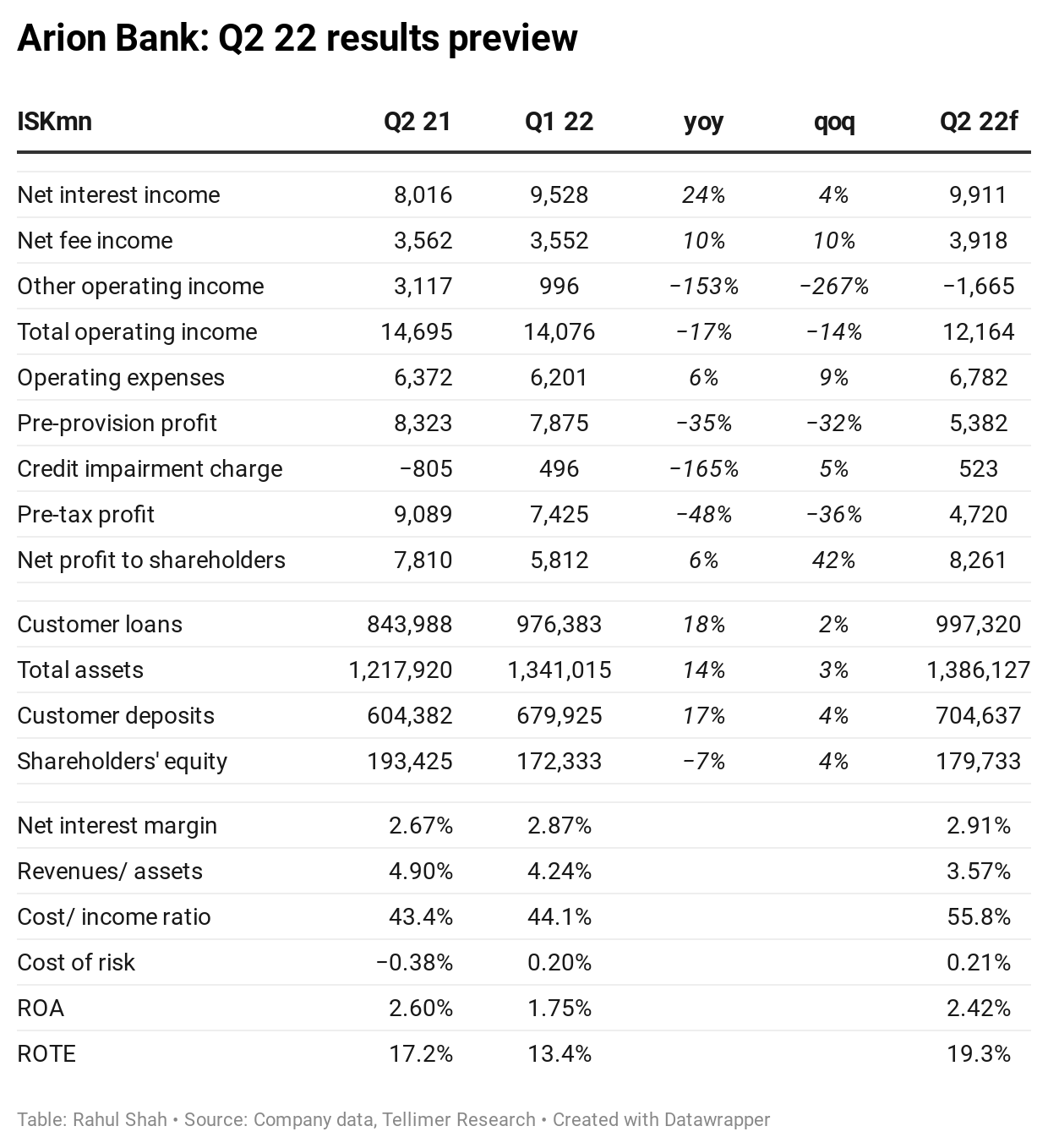 This report has been commissioned by Arion Bank and independently prepared and issued by Tellimer for publication. All information used in the publication of this report has been compiled from information provided to us by Arion Bank and publicly available sources that are believed to be reliable, however we do not guarantee the accuracy or completeness of this report. Opinions contained in this report represent those of the research department of Tellimer at the time of publication. The sponsor has had no editorial input into the content of the note, and Tellimer’s fees are not contingent on the sponsor’s approval of the research.