Argentina: What next after the restructuring agreement

Argentina announced an agreement on its debt restructuring with its major foreign bondholders earlier this week, subject to documentation. The deal adjusts certain payment terms and seeks to adjust some legal clauses compared to the government's previous offer. The deadline has been extended to 24 August to allow time for further discussion on the legal clauses. Settlement date is 4 September 2020.

The deal appears to value the US$ bonds at about US$55, according to media reports (our calculations are shown below), at a 10% exit yield, much closer to the creditors' position and a far cry from the government's initial low-ball offer of US$40 (see here). The deal provides significant cashflow relief to the government, about US$33bn over 10 years, according to the President.

The creditor groups have since come out in support of the deal. The government's agreement is with the three main bondholder groups and some other holders too. Recall, the Ad Hoc Group, the Argentina Creditor Committee and the Exchange Bondholder Group joined forces against the government on 20 July. Without their support the government would have struggled to meet the 50% minimum participation threshold, let alone the necessary voting thresholds under the bonds. Barring a last minute disaster, the deal therefore looks likely to go through with the requisite support and there seems to be little incentive to hold out. Indeed, non-tenderers, who will be dragged along by the CACs anyway, will receive lower PDI (through to April rather than settlement date; ie they will not be entitled to the early consent fee).

Specifically, the agreement adjusts certain terms of the government's revised offer of 6 July:

(i) shifting payment dates on the new bonds (from 4 March and 4 September to 9 January and 9 July);

(ii) amortisation on the new 2030 bonds (US$ and EUR) will begin six months earlier, in July 2024. The first payment is half that of the remaining payments. The bonds mature in July 2030;

There are also some changes in the agreement to the bond allocations and issuance limits. Holders of Euro and CHF-denominated bonds will also be allowed to tender their bonds for the new US$ bonds.

Regarding the legal provisions, the government intends to adjust the CACs to address creditor concerns, specifically we believe over redesignation and the use of the PacMan strategy (see here). Argentina is, however, looking for broader international support for the proposed changes. Bondholders have already lobbied international organisations, such as the US Treasury, IMF, IIF and ICMA, according to reports last weekend, to seek support for proposed changes. The government's statement announcing the agreement specifically states that agreement of the creditors "is expressly subject to Argentina’s New Bond documentation including these proposed adjustments".

For more background on the July offer, see here. 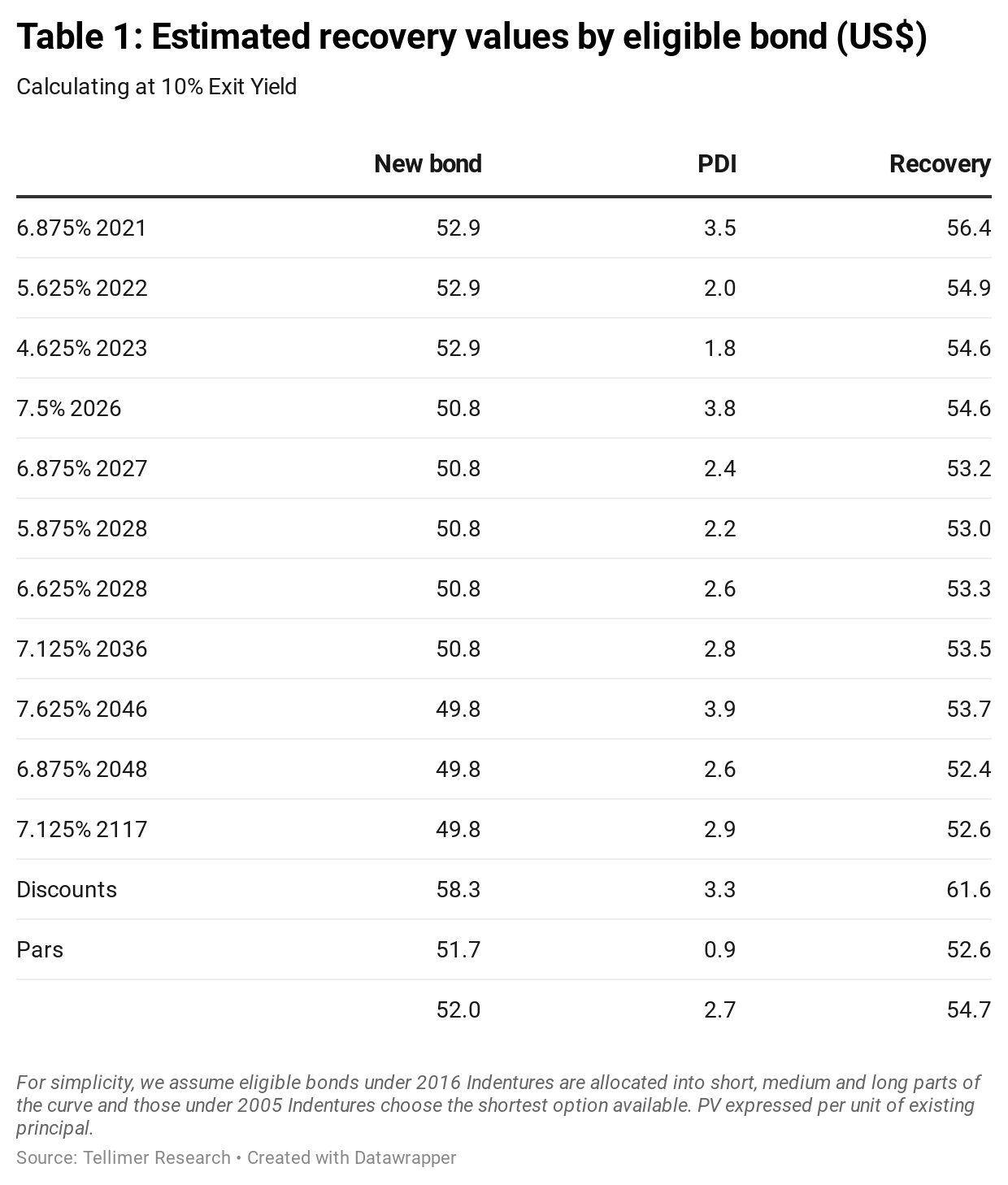 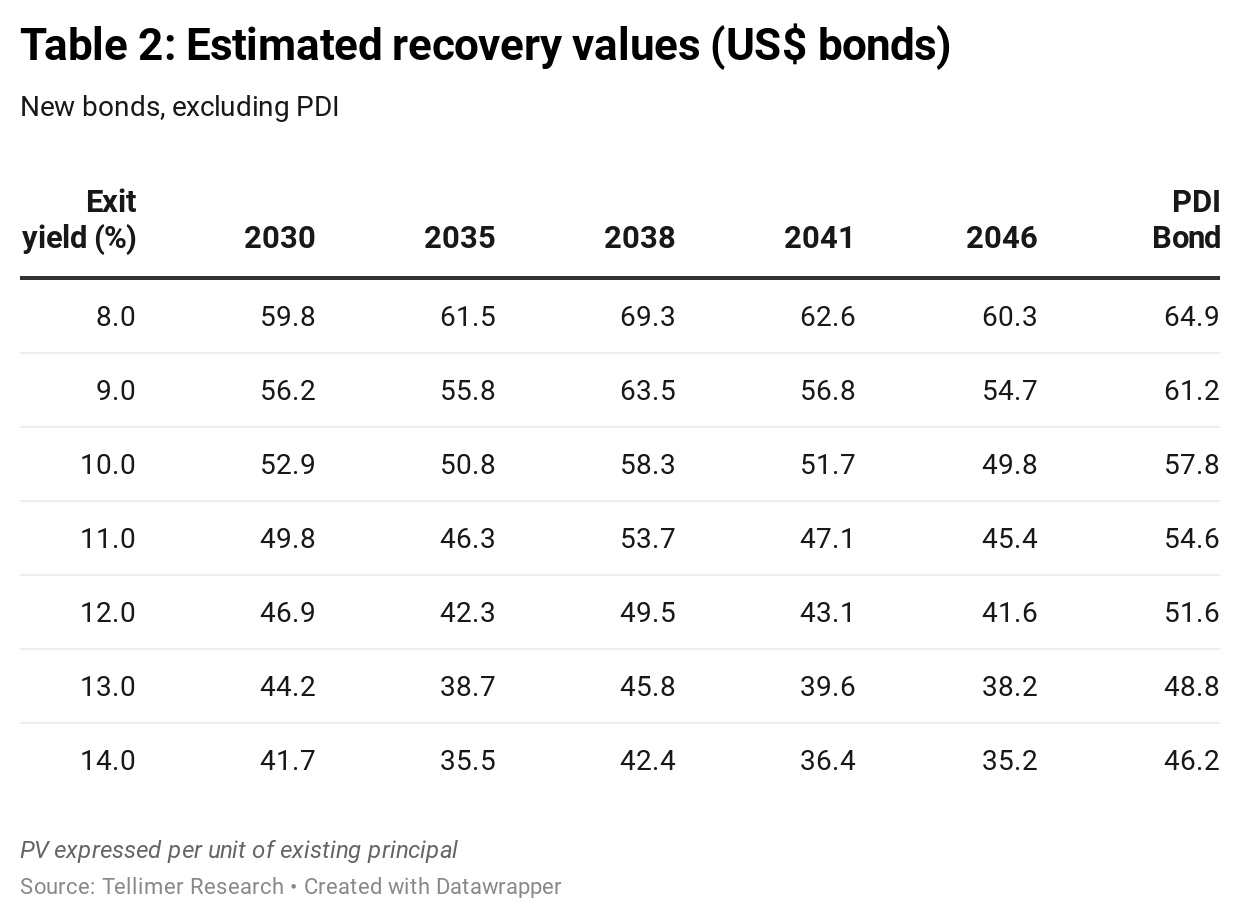 The deal implies some upside from current prices assuming a 10% exit yield despite the jump in prices following the government's announcement of the deal (bonds rose 2-3.5pts on the day, but prices have softened a little since). The belly of the curve, and the Pars, may offer most value, with c16% upside (Table 3).

However, the exit yield is uncertain. On the one hand, there are virtually no debt payments to default on over the next four years (see below). Together with the post-Covid external environment of global monetary stimulus and the search for yield, as well as market technicals, which will create demand for the new bonds from index-rebalancing, yields could be driven lower. If we assume an 8% exit yield, upside increases to about 40% in the belly of the curve. On the other, there must still be concerns over poor policy commitment and weak fundamentals, while investors should be cautious over a government that unnecessarily presided over the worst kind of strategic default – especially, if the government loads up on debt again to finance its recovery and development (as Macri did). The bonds look fairly priced relative to our expected recovery values if we assume a 12% exit yield. 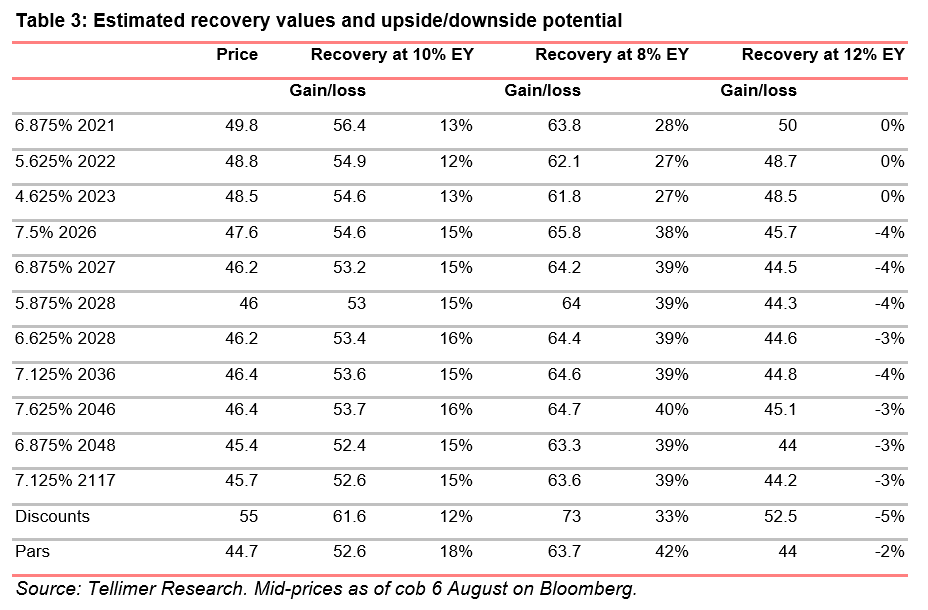 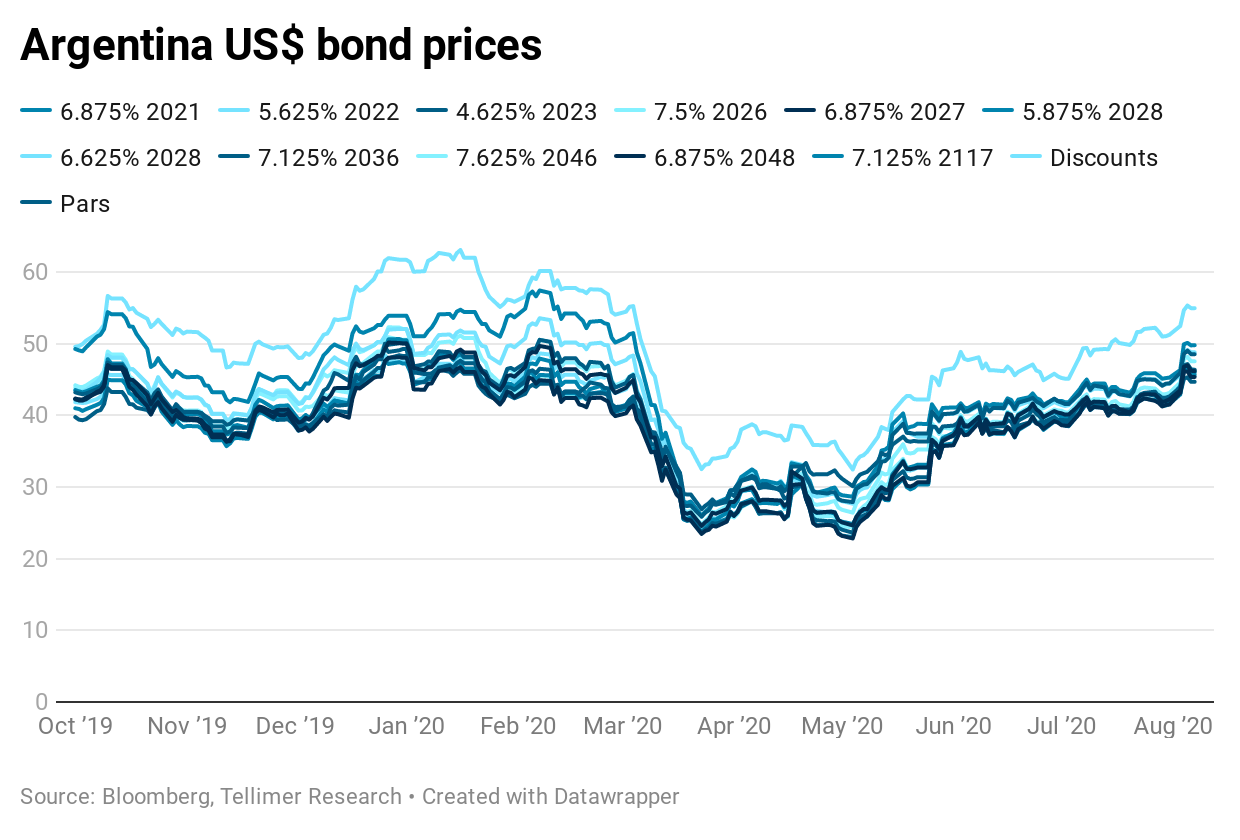 The deal provides significant cashflow relief for Argentina and essentially shifts the bonds' repayment profile back several years (see chart below). We calculate savings in principal alone at US$12.4bn over 2020-2023 — essentially the life of President Fernandez's term. Under the deal, repayments only commence in 2024 (and only US$680mn even then, on our estimates), but rise quickly thereafter over the next several years. We calculate principal savings alone amount to US$20.5bn over 2020-2030. 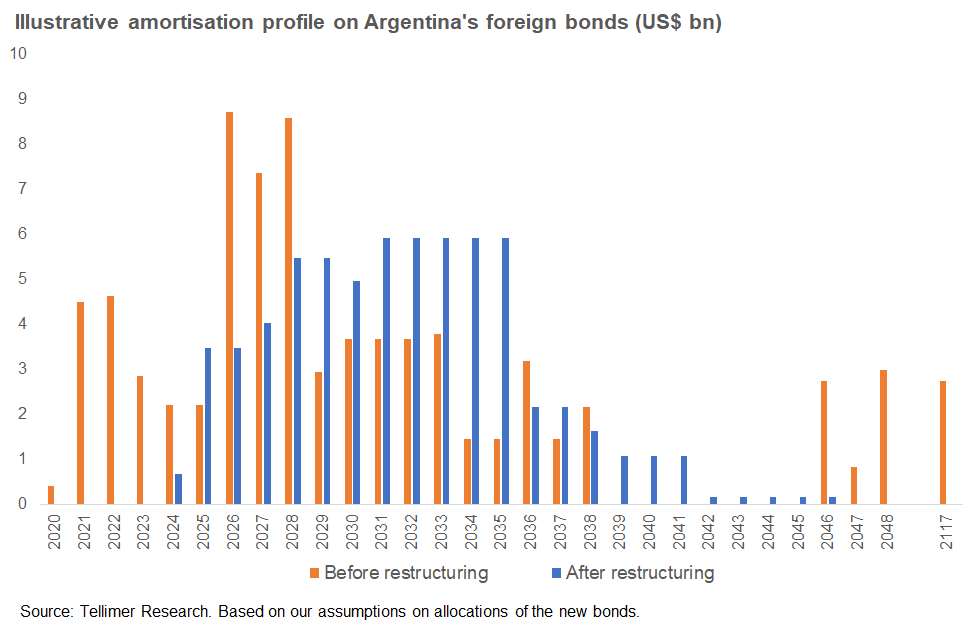 The question is, will the Fernandez government use the breathing space provided by this restructuring over the rest of its term wisely, in order to raise the country's potential growth rate, kill structurally high inflation, reduce fiscal dominance, invest in infrastructure and improve the country's poor underlying external competitiveness. This remains to be seen. But in the near-term, dealing with the impact of Covid-19 will be a priority.

Mid-term elections are also approaching next year, which could further distract policymaking and reform prospects. Fernandez will likely benefit in the eyes of many voters from having squeezed foreign creditors, but the honeymoon may not last long. The economy is in dire shape, and patience may wear thin, with real GDP expected to contract 10% this year, inflation at 40% (although disinflation may be helped by the deep recession) and unemployment rising to 10%. The government will need to show improvement, or grounds for optimism, but may also be weary of implementing reforms and adjustment measures on the population. A strong win in next year's mid-terms would help cement Fernandez's chances for re-election in 2023 (if he stands) — although that didn't help Marci last time — but a weak economy could open space for more populism either in the form of Kirchnerism (CFK) or from elsewhere. Indeed, the situation now (eight months in to Fernandez's term) is as bad as, or worse than, it was when Macri was elected in 2015 (see table below). 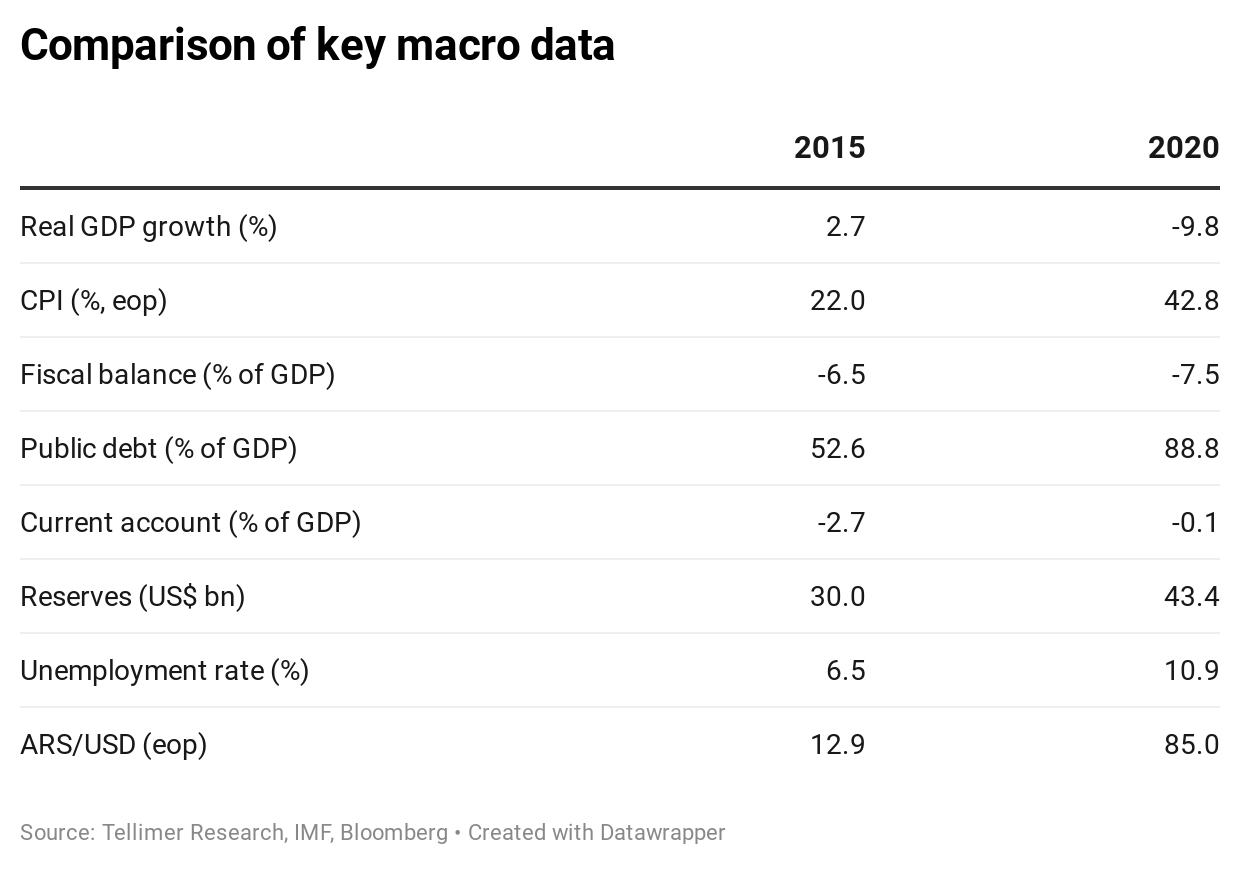 The next milestone for investors will be news on an IMF programme, as this may impose more policy discipline on the government than it might choose to do of its own accord. Fernandez said this week the existing Standby Agreement (SBA) has been cancelled, but that's no surprise. His government has said for a long time that they want a new programme, but seemingly haven't put much effort into it, instead prioritising the bond restructuring. The government also said it may start with an Article IV, which would be welcomed by investors in any case. There may be an element of time inconsistency here: with the bond deal done, will they still want a programme? However, the government may still need one in order to re-phase or rollover its IMF repayments. But Argentina will no doubt take its time to extract as much as it can. Reports this week suggested Argentina was aiming to reach an agreement on a new IMF programme by the end of March next year.

But what will an IMF programme look like? Will the IMF, already exposed and under new (dovish) management, seek to impose tough conditions, policy discipline and reform measures that investors would welcome — but realistically have little chance of being met, assuming this government even signs up to them? The Fund may already feel burnt from the experience of the previous SBA. Or, will the IMF be more lenient and seek not too harsh terms, making it an easier ride for Argentina, but probably risk weakening investor sentiment who fear the government's commitment to policy discipline is nothing more than lip-service?

Public debt is still some 90% of GDP although, in NPV terms (debt service), it is now made more manageable over the medium term. Expectations for trend growth are modest, around 2%, notwithstanding a possible V-shaped bounce next year. But interest payments are also now lower, which will help the debt dynamics. Still, some fiscal effort will be needed. But the government's aim of a 1% primary surplus only by 2026 in an upside scenario does not send a very strong signal of fiscal rectitude.

We think it is this dilemma on what the IMF will do and what Argentina wants (or will accept) that will weigh on investor sentiment in the coming months, and impact the future direction of bond yields.

We remain cautious at this stage and retain our Hold on the US$ bonds.