Argentina: Too wild to ignore for most equity investors

Argentina equities, measured by MSCI Argentina, have bounced 15%, in total US$ return terms, since their early September 2019 lows. Trailing price/book is 1.0x and the index level (not to mention the FX rate of course) is, of course, still well below where it was prior to Macri's election in October 2015 (when capital controls were in place, debt was in default and official inflation data was unreliable under the Kirchner government).

Even though they can all agree on the depth of its macroeconomic challenges, this is the latest example of a sharp bounce that creates such a headache for equity fund managers using a benchmark where Argentina is a material weight.

Equity investors can walk away from Argentina until, at least, the new government's economic policy (fiscal austerity, FX convertibility), restructuring with bond holders (local and international) and relations with the IMF are more clearly visible.

Or they can take a very long-term view that there are business models in Argentina, eg the banks, that will sustain through this latest crisis and that, after a lot of uncertainty, volatility and damage to earnings, there will be greater equity value left on the table than is currently reflected in share prices.

Below, we revisit this debate.

Deep value for the patient

The market capitalisation of the the three largest listed banks – Grupo Financiero (GGAL), Banco Macro (BMA), and BBVA (BBAR) – is less than US$4.5bn. That is, at most, equivalent to one percentage point of nominal GDP (if we assume GDP of US$450bn in 2019, compared with US$640bn in 2017). These are three banks that account for c25% of private sector deposits and loans, in a system where banking penetration is 15-20% of GDP. (Argentina deposits/GDP are c20% and loans/GDP are c15%, compared with 25-50% and 25-80% in regional peers Brazil, Chile, Colombia, Mexico and Peru).

Too wild to ignore for the rest

Most equity funds in Argentina's ADRs are bench-marked to indices like MSCI EM, MSCI EM LatAm or MSCI FEM, and have to deal with daily liquidity requirements. With Argentina's non-trivial weigh in these indices (eg this is not too-small-to-care-about Pakistan), its easy access via ADRs (this is not too-at-risk-of-trapped-capital Nigeria circa 2015) and with performance swinging around so violently it is hard to simply ignore it (Argentina accounts for approximately 20bps of MSCI EM, 470bps of MSCI FEM and 170bps of MSCI LatAm).

It hurts too much on the downside (in a falling market) for funds that have to be responsive to redemptions at any time. And it hurts too much on the upside (in a rising market) for funds that are underweight relative to their benchmark (and then find themselves having to chase even harder to rebuild to an equal weight when that weight itself keeps increasing).

Therefore, we find most institutional funds that remain invested in Argentina adopt one of two equity strategies: 1) simply buy stocks in proportion to their index weight (ie duck the active fund management decision entirely), or 2) shift to stocks with proportionately less exposure to the domestic economy (IT software developer Globant (GLOB), 90% of its revenues in North America, up 67% ytd in US$ total return terms) and/ or secular growth (e-commerce player Mercado Libre (MELI), 85% of revenues in Latin America ex-Argentina, up 91% ytd), almost irrespective of valuation considerations (Globant is on trailing PE of 55x and Mercado Libre is barely profitable). Until April 2018 (when the latest crisis began in earnest), we encountered a consensus whose quest for relative defence in Argentina also erroneously included supposedly government-guaranteed revenue streams in utilities like Pampa Energia (PAM, down 44% ytd).

If a case can be made that Argentina can get back on the path to sustainable growth, then perhaps these are not the stocks to remain so heavily weighted towards. Put another way, if Argentina ADRs are at all investable, then maybe the very attractive valuations of domestic-focused business models, for example the banks, are due a revisit. Else, perhaps the real, uncomfortable, truth is simply that the entire equity market should not be touched at all (too much macroeconomic uncertainty or too high a valuation for anything relatively insulated from that uncertainty).

Equities down 30% ytd, after a 15% bounce from September low 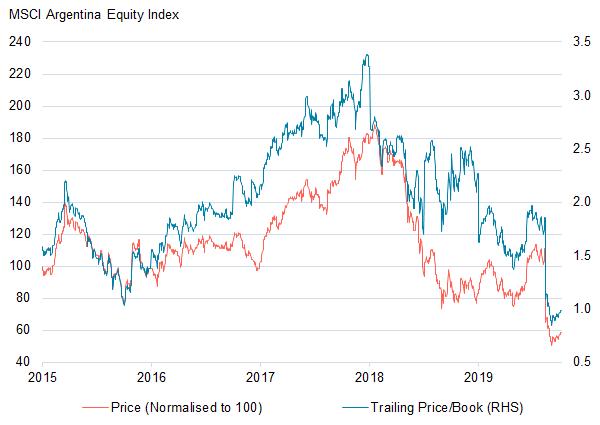 Screen for liquidity, performance and valuation 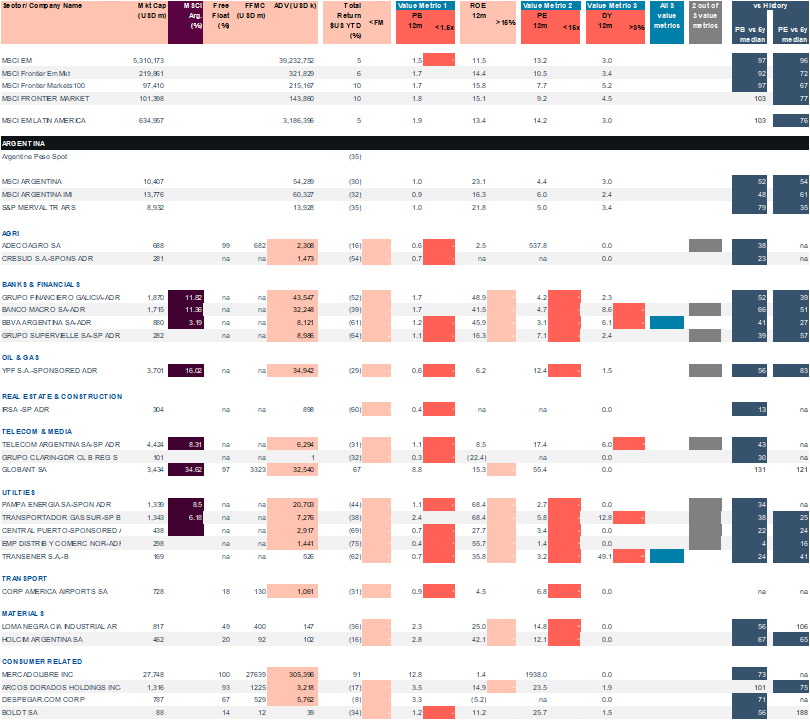