It's hard to know what to make of the news overnight that Sergio Massa, speaker of the lower house, has replaced economy minister Silvina Batakis in Argentina. She had spent less than a month in the job following former minister Martin Guzman's surprise exit earlier this month. While somewhat of a shock, the developments confirm rumours that surfaced earlier this week about her impending replacement.

Batakis hadn't spent enough time in the job either to make a difference, or make things worse, a bit like sacking a football manager after one game, and it seems unlikely she left of her own accord at this stage (given she had just come back from a trip to Washington to meet with the IMF, World Bank and investors earlier this week). Perhaps she lacked the necessary political support in the ruling coalition (but surely they will have known this when she was appointed), or perhaps the Fernandez-es (President Alberto and Vice President Cristina Fernandez, but mostly the latter) were disappointed that she hadn't ripped up the IMF agreement already.

Meanwhile, as much as Batakis's appointment (and Guzman's departure) were seen as a victory for CFK, it is not clear if CFK has now been weakened by Batakis's exit and Massa's arrival.

Crucially, Massa's is a much higher profile appointment than either of his predecessors under this presidency. We think Massa – who has his own political support base and presidential ambitions – is a more overtly political appointment (than either Guzman or Batakis) rather than a technocrat, albeit a moderate rather than from the left. He therefore may be able to succeed, where others have failed, in bringing together the seemingly divided ruling coalition, and build a consensus for reform, taking difficult and long overdue decisions (assuming, of course, he is himself willing to do this).

In addition, Massa is set to lead a new super ministry, combining the Ministry of Economy with the Productive Development and Agriculture, Livestock and Fisheries ministries (perhaps that was his price for taking the job). A unified ministry may help policy coordination and implementation of cross-cutting issues, but it is no panacea.

What really matters, and what is currently lacking, is a clear and credible vision of what kind of Argentina the government wants, and a shift in policies, rather than taking short-term decisions based on political expediency. It is not sure if personnel changes will change that.

And it seems a gamble for Massa, although it is arguably too late for him to distance himself from this government. If it works, he would be a shoe-in for the presidency next year although taking tough decisions risks his own popularity. But it could also be counterproductive in terms of his relations with CFK – she wants him to succeed, to keep herself relevant come next year, but she doesn't want him to out-shine her (so he could be jettisoned if he seen to be doing too well). And if it doesn't work, his brand could be irrevocably tainted (although political comebacks in Argentina are not so unusual).

As to highlight the size of the challenge ahead (if there was any doubt) the central bank hiked rates by 800bps yesterday to 60%; an increase of 2,200bps (that is 22ppts) this year, as CPI inflation rose to 64% yoy in June.

We maintain our Hold on Argentina's US$ bonds, even at these low prices (notwithstanding yesterday's bounce, although that may owe as much to the rally in USTs following the disappointing Q2 GDP figure as to Argentina's musical chairs), with the 2030s indicated at a price of US$22.6 (yield of 37.5%) as of cob 28 July on Bloomberg (mid-price basis). 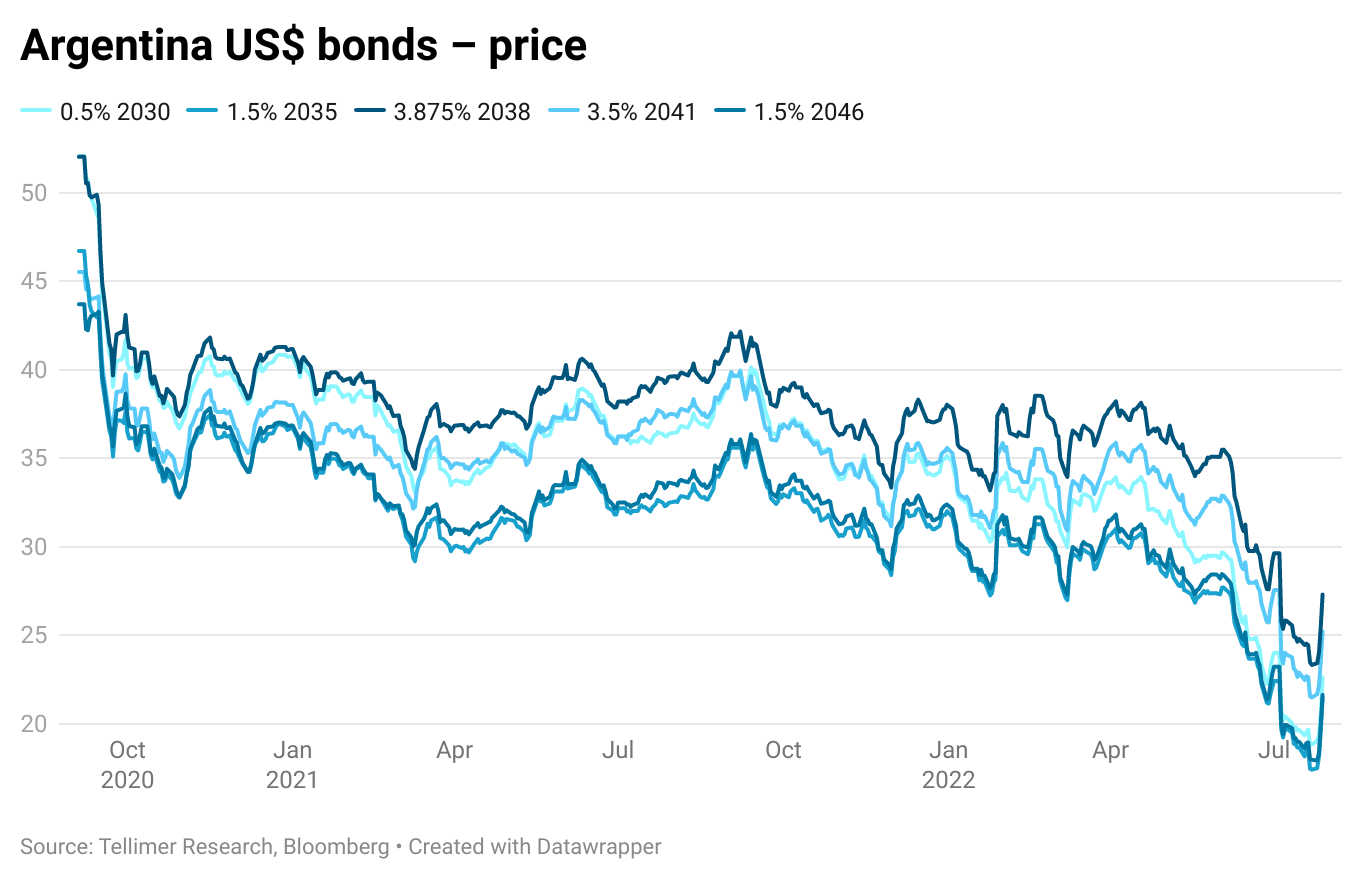