Argentina's primary elections (known by the acronym PASO) held on Sunday 12 September delivered a heavy blow to the government ahead of mid-term elections on 14 November.

According to media reports, the main opposition coalition Juntos por el Cambio was leading the ruling Frente de Todos (FdT) coalition in several races, based on results so far. Most significantly, this includes the crucial Province of Buenos Aires (the country's most populous region), which is traditionally Peronist, and which may be seen as an election barometer come the next presidential election in 2023.

The midterms are the first major electoral test for President Alberto Fernandez since he took office in 2019 and the first electoral test since the outbreak of the pandemic. It is also a test for the main opposition coalition following the disastrous end to President Macri's time in office.

The mid-terms, which see half of Argentina’s lower house and a third of the Senate up for re-election, act as a referendum on the government's record so far and may set the start of the race for the 2023 presidential election. And because voting for most adults is compulsory in Argentina, the primaries, in which parties select their candidates for the mid-terms, act as a national opinion poll.

The elections come at a time when Fernandez's approval rating has slumped from 57% in April 2020, shortly after taking office and before the pandemic really hit the country, to 34%, according to the FT. Fernandez's popularity has suffered from economic mismanagement (with inflation over 50%) and the government's handling of the pandemic (including a scandal in which the president's wife held a private birthday party in breach of lockdown rules).

This could even make the Fernandez government a lame-duck presidency in the second half of its term, which doesn't bode well for the IMF programme (if and when it happens), although that depends on how cooperative the opposition will want to be.

Perhaps striking a surprisingly conciliatory and humble tone, Fernandez appeared to acknowledged his government's poor showing in a speech on Sunday night, stating that he has heard the public's verdict and will learn from their mistakes. But there may be little he can do in the next two months to turn people around.

While the results from the PASO may appear market-positive, if confirmed in November, it is too early to know if it will cause the government to take a more investor-friendly approach or whether it will adopt more populist and heterodox policies to boost its short-term appeal.

In the short term, what will matter to investors is what it means for IMF negotiations, which are not expected to conclude until after the mid-terms anyway, and for which there is a short window to complete, before Argentina risks defaulting on its official sector obligations (including Paris Club debt). 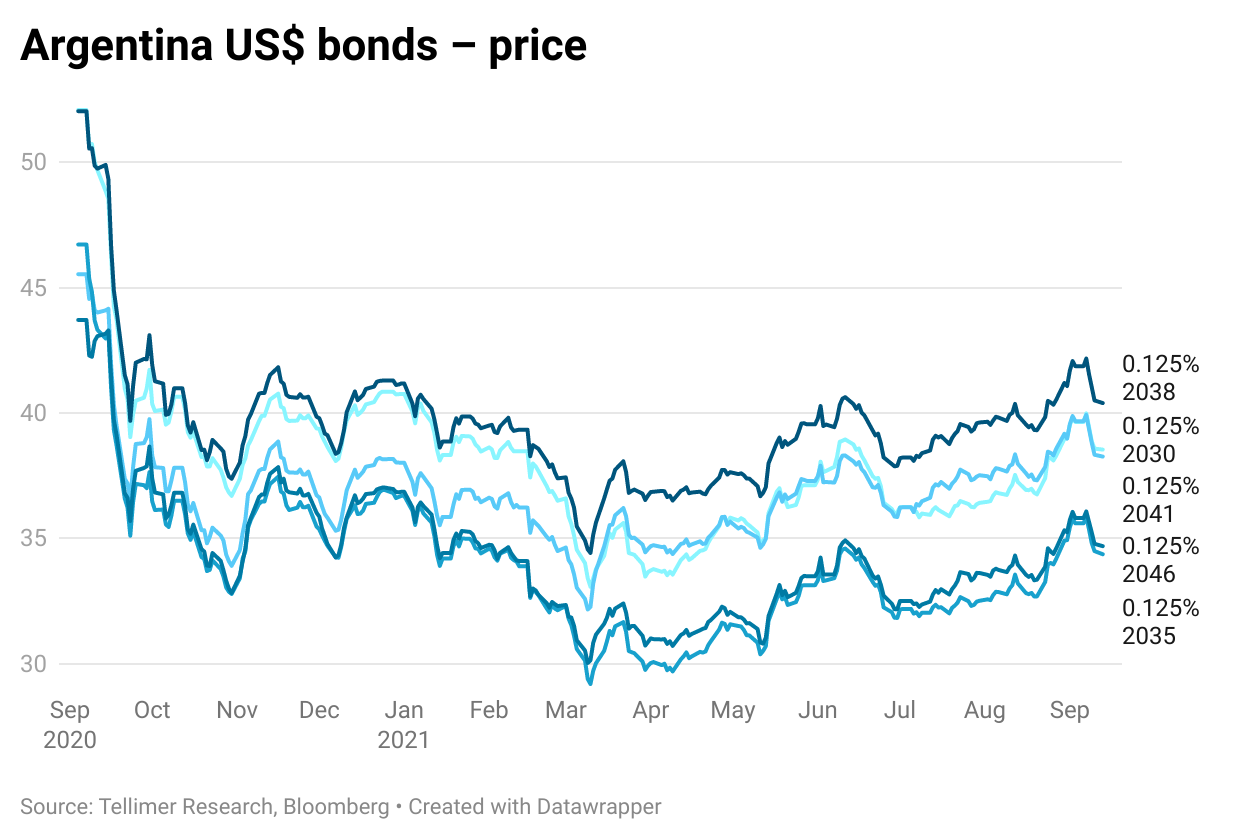 Argentina equities (Merval Index) are up 27% ytd in total US$ return terms, compared to LatAm peers that are bookended by Mexico up 19% and Peru down 25%.

This is driven both by the role of equities as a hedge in a hyperinflationary environment and the largely international revenues of two of the largest listed companies, Mercado Libre in e-commerce (up 10% ytd) and Globant in software solutions (up 49%).

Argentina now sits outside the main EM and FM benchmarks because of capital controls – “unclassified” by FTSE since September 2020 and “standalone” by MSCI since June 2021. It is not an equity market that foreign investors need to look at in general.

However, MercadoLibre, specifically, is such a big a play on LatAm Tech, such a rare, highly liquid play (ADV of cUS$615mn) on Tech for Frontier investors, and is accessible via ADR (with no dividend stream that is at risk from capital controls) that it garners outsized attention.

Index trailing PB is 1.0x and forward PE is 10.7x, both on par with their respective 5-year medians.

A more interesting reflection of the extent of bearish consensus sentiment on Argentina’s macro outlook is that the combined market capitalisation of the three largest listed banks, which collectively have c22% of banking system assets, amounts to US$3.6bn, or less than 1% of nominal GDP.