It’s still too close to call. With just 11 days to go before the primaries (“PASO”), ahead of the first round of the Presidential election on 27 October, opinion polls still show a relatively close race between incumbent Mauricio Macri (Together for the Change party) and the main opposition candidate, Alberto Fernandez (Front for All), who is running with ex-president Cristina Fernandez de Kirchner (CFK) as his vice president pick. In this report, we look at what the polls are saying.

While Macri may have received a boost in the polls and narrowed the gap with A. Fernandez, since his VP ticket was announced (with moderate Peronist Miguel Pichetto) and amid some signs of stabilisation of the economic situation, most pollsters still show A. Fernandez ahead in the first round. According to La Politica’s poll of polls, A. Fernandez has a 2.8pp lead over Macri (42.6% vs 39.8%) based on a weighted average of polls and adjusting for undecided voters. Some of the more recent polls however put Macri ahead, which might provide some encouragement that he has more momentum. That said, Macri is mostly seen as beating A. Fernandez in a second round run off on 24 November, leading by 50.3% to 49.7% according to La Politica’s poll of polls. 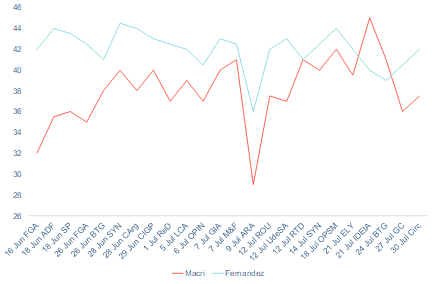 Economic challenges remain for whoever wins. Maintaining policy discipline, in the context of the existing IMF programme, will be a crucial part of retaining investor confidence. This might be easier for Macri, given his orthodox policy approach, rather than A. Fernandez’s more heterodox and interventionist policy bent. A. Fernandez has already called for a renegotiation of the IMF programme, although it is not clear how much room there is to do this, especially given it is Exceptional Access (a programme in which debt is characterised as being sustainable but not with high probability). It would only take minor shocks to the baseline parameters to risk debt becoming unsustainable on that basis, which might then force a restructuring.

We retain our Hold on Argentina US$ bonds. Double-digit yields still reflect a lot of uncertainty amid concerns that the Fernandez ticket could triumph.  While we think there is a lot of upside on a Macri victory, we think risks to prices are skewed much more to the downside on a Fernandez victory (see p8 of our Fixed Income Strategy Outlook).

Equities, measured by MSCI Argentina, are up 28% in total US$ return terms ytd, outpacing EM (up 9%) and FM (up 15%) benchmarks, despite a 14% FX rate devaluation. Trailing PB of 1.9x (for 18% ROE) is in line with the 5-year median and 2020f PE is 10x (for 10% consensus earnings growth). Trading liquidity has picked up following Argentina’s inclusion in MSCI EM (with about 34bp weight) in May, which may suggest that mainstream EM fund managers consider the market too volatile to ignore (as opposed to too small to pay attention to).

That cannot be described as a distressed valuation or volume environment. Given the top-down thesis remains very exposed to the outcome of an election that we cannot predict, we struggle to recommend anything more than a neutral country weight.

But we reiterate our view that this market is unlike any other in the FEM universe (i.e. it has to do less to attract inflows) because of its accessibility via ADRs, extreme gearing to global risk appetite, unrivalled sovereign support from the IMF and ability to compete within a large pool of international assets dedicated to LatAm equities at a time when other regional markets have their own challenges (e.g. policy credibility in Mexico, anaemic copper prices for Chile and Peru).