Argentina: Implications of the government's defeat in mid-term elections

Provisional results from Argentina's mid-term elections held yesterday show a heavy defeat for the centre-left government of President Alberto Fernandez. Although defeat was expected, following the government's disastrous showing in the primaries in September, the outcome – while bad – was perhaps not as terrible as it might have been.

The ruling Frente de Todos (FdT) coalition lost control of the Senate, falling from 41 to 35 seats in the 72-member upper house, and below the 37 seats needed to call a quorum, based on early projections. If confirmed, according to reports, it will mark the first time since the return to democracy in 1983 that Peronism will not have a majority in the Senate. And, already without a majority in the lower house, the result means the government has lost control of Congress.

However, the government looks as though it will retain its position as the first minority (biggest party but without a majority) in the Chamber of Deputies, the lower house. The main opposition coalition, the centre-right Juntos por el Cambio (JxC), will have hoped to have overtaken the FdT to become the largest party. Crucially however, the opposition won the key election battleground in the Peronist bastion of Province of Buenos Aires, as had been suggested in the primaries, albeit by a narrow margin, with 40.1% of the votes versus 38.4% for the government, and appears to have taken Santa Fe, while holding Córdoba and the city of Buenos Aires.

At a national level, the opposition got 42% of the vote compared with 34% for the ruling coalition, according to La Nacion.

The mid-terms, which see half of Argentina’s lower house and one-third of the Senate up for re-election, are the first major electoral test for President Alberto Fernandez since he took office in 2019 and the first electoral test since the outbreak of the pandemic. They are also a test for the main opposition coalition following the disastrous end of President Macri's time in office. Moreover, the elections set the stage for the next presidential election in 2023.

The government's defeat had been expected after the shock results in the primaries in September, which showed JxC on c37% of the national vote compared with 33% support for the FdT. It was therefore merely a matter of how bad the result yesterday would be. According to political strategists, if the primary results had been repeated on Sunday, the ruling coalition would lose its majority in the Senate and the opposition coalition become the largest bloc in the lower house, albeit without a majority. In the event, the government managed, somehow, to hold its ground in the lower house.

The government responded to the shock primaries with a cabinet reshuffle that asserted Vice President Cristina Fernandez de Kirchner's (CFK) control over the president, promised additional spending (financed by printing money) and announced more price controls to try to get a hold of (the rampant) inflation, while the parallel currency has plummeted. But there was little the government could do in two months to turn around its popularity.

Still, the election results are a huge slap in the face for the president and CFK, amid voter concern about the state of the economy and the government's response to the pandemic. Both will be politically weakened by the result, if not chastened, although CFK is more likely to blame others. Indeed, the Fernandez government risks becoming a lame-duck presidency in the second half of its term, hurting its chances of re-election, and that of Kirchnerism, in 2023. 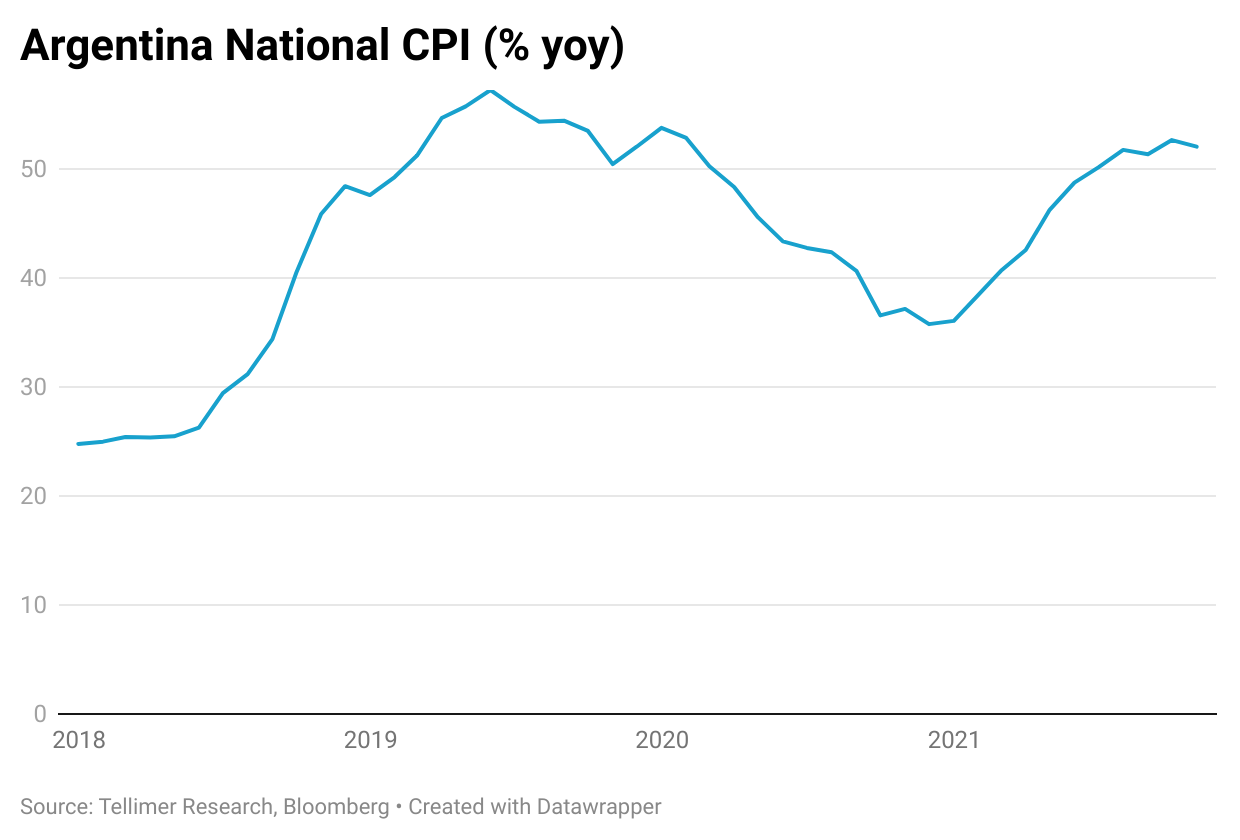 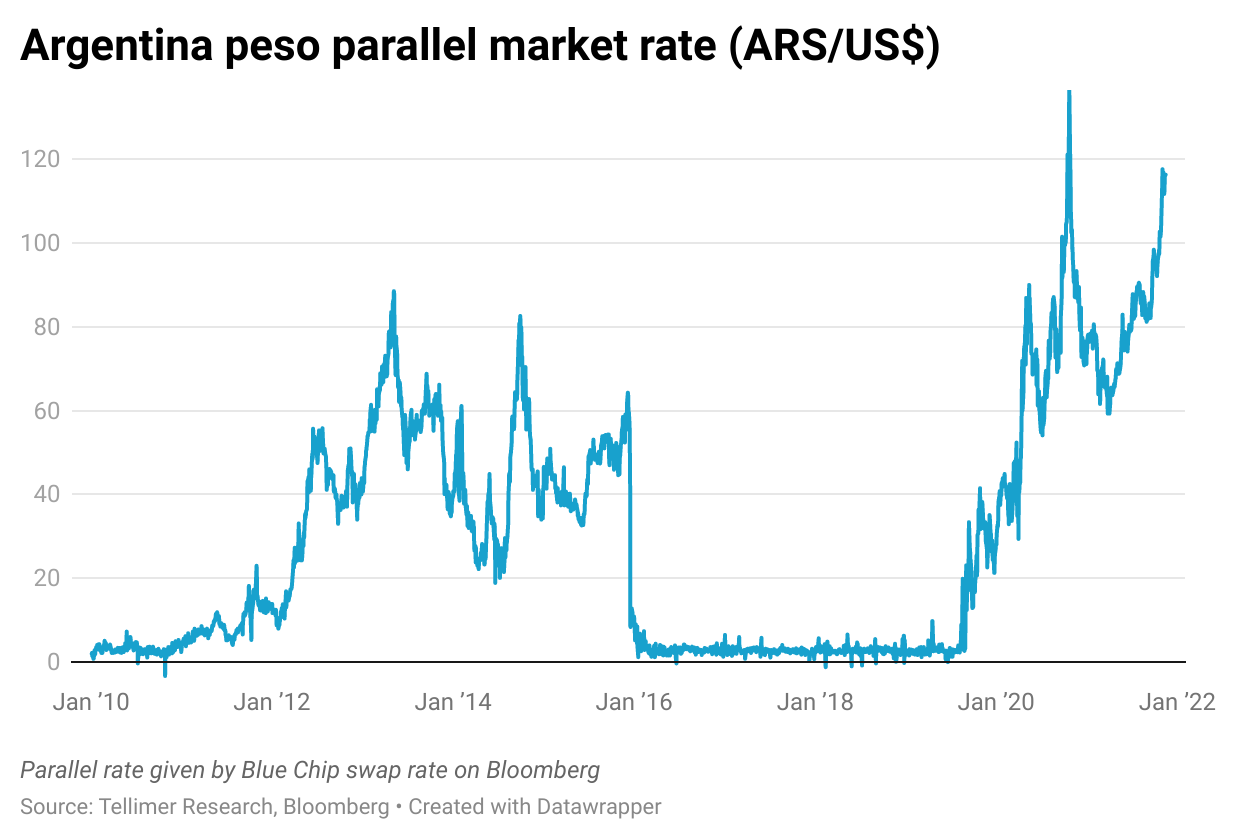 Much will now depend on how the government (and. perhaps crucially. CFK) reacts to this defeat, which should not have come as a shock and so they could have planned for it. But it is not clear if the result will cause the government to moderate its policies or whether it will adopt more populist and heterodox policies to boost its short-term appeal. Some in the ruling coalition may prefer the former, while others in the radical camp who feared the outcome could be worse may even celebrate and see it as an endorsement of their approach. The battle for ideology could prove damaging.

In particular, investors will be concerned if the government's reaction follows that of the primaries, which the government mistook as a signal for more radical and interventionist policies, rather than more centrist policies. The primaries revealed bitter divisions within the ruling coalition after CFK sought to exert more control over the president in a cabinet reshuffle. However, a stronger and emboldened opposition could act as a discipline device on the Fernandez government, and limit its more radical tendencies. This might be seen as positive, or lead to deadlock.

Another thing to watch will be the position of Minister of Economy, Martin Guzman, who CFK may blame for the defeat and who has reportedly appeared to take a more radical stance since the primaries.

Perhaps to provide reassurance and offer some kind of leadership, President Fernandez late yesterday called for dialogue with the opposition, although he made similar conciliatory noises after the primaries, and that he would send a multi-year economic plan to Congress in December. While the government will be forced to make concessions to the opposition to get anything done in the last two years of its term, it is not clear what such a dialogue will mean or if it could result in any kind of political agreement (or pact) between the government and opposition to rule by national consensus, and if it does, whether such an agreement will stick and how long it will last (a pact seems very unlikely given the nature of Argentine politics).

Former president Mauricio Macri, leader of the JxC, did however say his coalition would act with great responsibility. The opposition has an incentive to cooperate, and seek to demonstrate its competence to govern, hoping to be rewarded by being elected in 2023. Crucially, any economic improvement between now and then also reduces the scale of the task it would inherit (as, ultimately, Macri found to his cost in 2015). However, nor does the opposition want things to improve so much that it actually works against them and improves the electoral chances of the government. Conversely, the opposition will be wary if such cooperation is merely a cynical ploy by the government to be able to blame someone else if things don’t improve.

Whether on its own, or acting together, the main near-term policy challenges are dealing with inflation and the exchange rate, although the government (so far) has ruled out a devaluation, and part of the solution will be identifying a credible fiscal path.

Crucially, the first test will be securing a long-delayed IMF agreement (one that will help refinance existing payments to the Fund, which pick up massively in 2022-23), catalyses new external financing and provides a credible macro-policy framework, which has hitherto been lacking.

Argentina should be able to manage the remaining US$2.3bn in payments due to the Fund this year (which includes a US$1.9bn principal payment on 22 December), and a US$0.7bn principal payment on 28 January, despite its delicate reserves' position. While gross reserves are US$42.8bn (10 November), they have fallen 7% since August (and the SDR allocation has all but been used already), and net reserves are reportedly much lower. But payments pick up significantly thereafter, starting with a US$2.9bn principal repayment in March. Altogether, US$19.2bn is due in 2022.

Failure to reach an IMF agreement before March 2022, therefore, risks Argentina defaulting to the Fund, and (further) international isolation, as well as default to the Paris Club under its partial repayment plan for rescheduled amounts, which is conditioned on reaching an IMF agreement by March 2022. However, the government, and especially CFK, may not be so concerned about a default to the Fund. And while President Fernandez's call for dialogue may signal some willingness for moderation, it is not clear how far this goes and it is at odds with the government's more radical stance towards the IMF and resistance to any kind of policy adjustment.

And rather than focus on designing a credible economic programme, the government has instead spent its time needlessly trying to win international support for its strategy to cancel IMF surcharges and extend repayments. We think it is unlikely to gain much sympathy, despite throw-away comments from the G20, until it focuses on policies. Moreover, the IMF will be aware of the moral hazard of cancelling surcharges, and the signals that would send to other big borrowers (either now or in the future). In fact, given we estimate surcharges amount to only cUS$0.5bn pa, out of a total principal amount of US$44bn, it looks as though Argentina cannot see the woods for the trees. 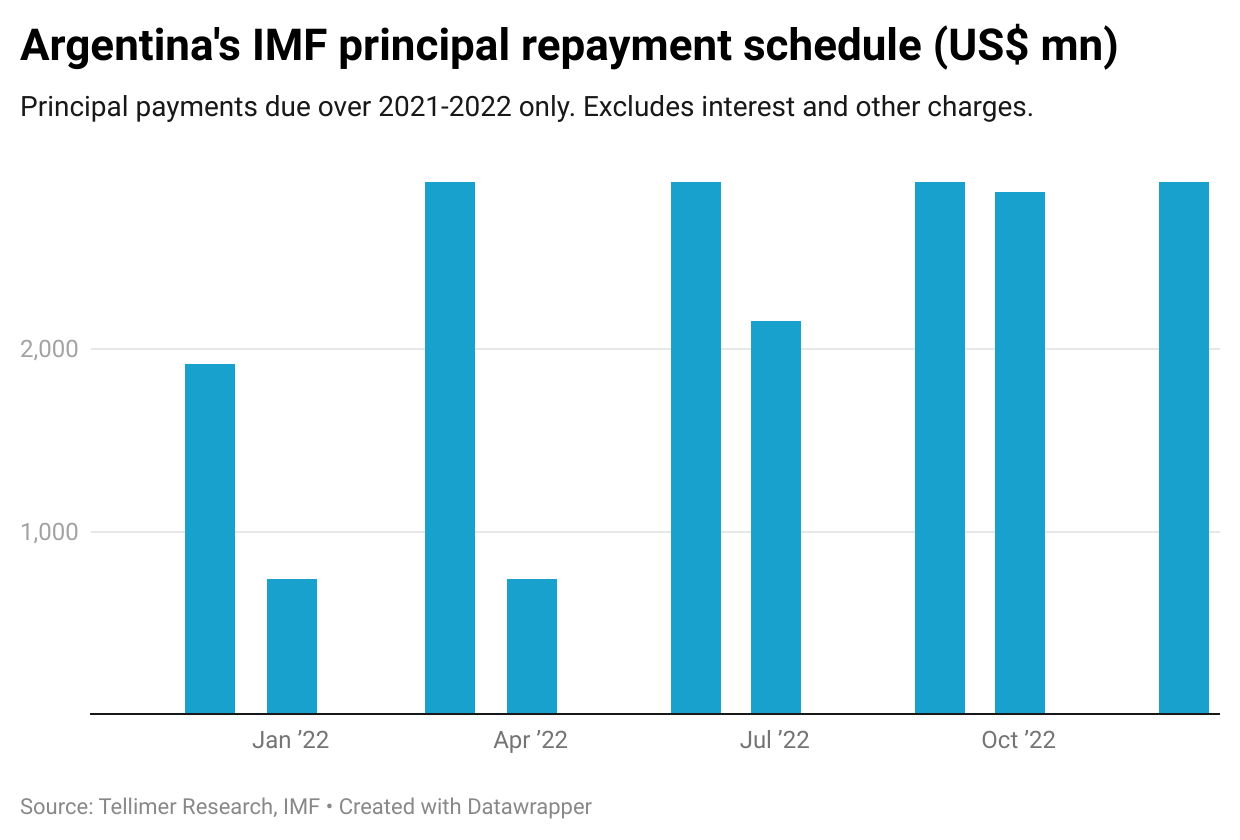 We see the results from the mid-terms as broadly neutral, as they are largely as expected. The opposition will have more influence, but the government may feel it still has something to play for. A bigger defeat for the government (losing its first minority status in the lower house) on the other hand might have been more negative, as it could have raised fears of more radical policies. But we think it is also too early to be too positive about the near-term economic outlook and the opposition's chances in 2023. Two years is a long time in Argentine politics. And while President Fernandez's call for dialogue may assuage concerns about governance in the near term, it remains to be seen whether this is viable and what form it would take.

In the short term, what will matter to investors is what it means for IMF negotiations, and after wasting so much time, there is now a short window to complete them by March 2022 before Argentina risks defaulting on its official sector obligations (both IMF and Paris Club debt). 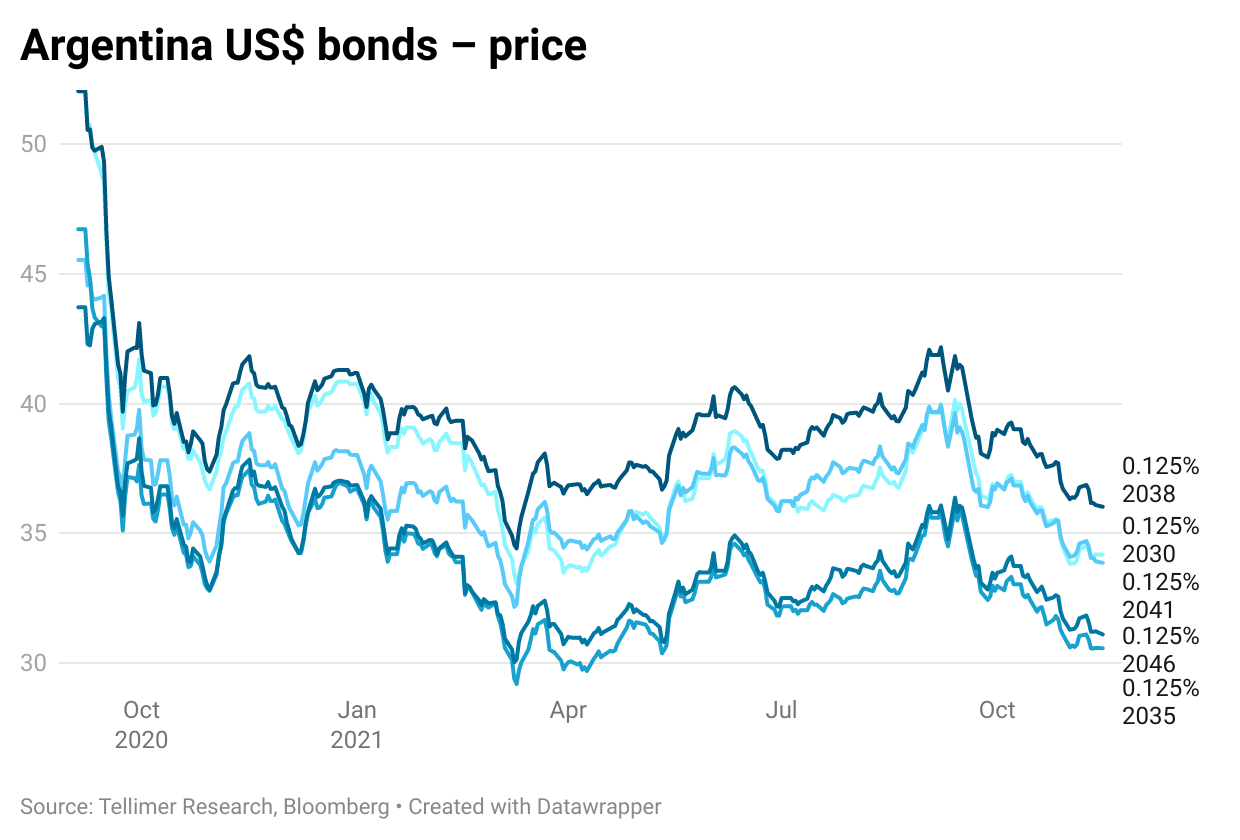 Argentina equities (Merval Index) are up 55% ytd in total US$ return terms, compared with LatAm peers, which are bookended by Mexico up 19% and Brazil down 18%.

This is driven both by the role of equities as a hedge in a hyperinflationary environment and the largely international revenues of two of the largest listed, Tech-related companies, Mercado Libre in e-commerce (up 2% ytd) and Globant in software solutions (up 63%).

Argentina now sits outside the main EM and FM benchmarks because of capital controls – “unclassified” by FTSE since September 2020 and “standalone” by MSCI since June 2021. It is not an equity market that foreign investors need to look at in general.

However, Globant, a liquid play on US and European IT Service, with ADV of US$80mn (and 88% of the MSCI Argentina index), and Mercado Libre, the most liquid play on LatAm Tech, with ADV of cUS$588mn, are both accessible via ADR (ie the risk of trapped capital is mitigated) that they garner outsized attention.