It has been three months since the IMF's statement on the commencement of formal programme negotiations, when we warned there was still a long way to go, and indeed, not much has changed. In fact, if anything, the situation has deteriorated, with the government briefing on the need to delay a deal, as policy gives way to politics, while bondholders' frustration is growing.

Vice-President Cristina Fernandez (CFK) is said to be pushing for a delay to an IMF deal, until much later in the year, according to media reports last week. Officially, a delay is warranted because of the uncertainty caused by the pandemic, and it might be difficult to implement the sought of measures the IMF would want to see in a programme against the backdrop of Covid (although other countries are doing just that). Real GDP is expected to have declined by 10.5% last year, according to the Bloomberg consensus, although growth is projected to rebound to 4.8% this year. But the real reason is political expediency ahead of crucial mid-term elections in October. The government doesn't want to commit to IMF policies this side of an election; and, domestically, it has committed to submitting the IMF agreement to Congress for approval. In addition, the rebound in soy prices may also have reduced the sense of urgency.

This contrasts with earlier government statements that it was hoping for a deal somewhat sooner (or maybe that was never the intention and it was just stringing everyone along). Economy minister Guzman said in December that it would be acceptable to have a programme by March/early April. In January, Guzman said a deal by May would be acceptable. But since CFK's bombshell, the government now appears to be on message, with local media this week citing government sources saying that it was preferable to wait a little longer than May to get a programme that works. Still, media reported yesterday that Guzman will travel to Washington DC in March to meet the IMF, which could be a positive sign. However, while no-one will dispute the importance of getting the programme's design right, talk of delay also smacks of an opportunistic government that lacks the willingness to reach a deal. Delaying until after the elections would also deceive the Argentine public.

Delaying an IMF agreement, however, also allows economic imbalances to build and delay the eventual recovery. This concern is echoed in a public statement from a bondholder group (the Ad Hoc Group of Exchange Bondholders) last week, which noted its disappointment and frustration over the government's approach and, still to this day, the lack of a credible economic programme. But should we have expected anything else? There was always a sense of time inconsistency about putting a restructuring before the IMF agreement, given Argentina's lack of policy credibility, a concern that was not so pressing in the case of Ecuador last year (where the Moreno government had more policy credibility) or Mozambique in 2019 (when natural resources backstopped a restructuring agreement despite bondholders' earlier insistence on a programme as a pre-condition to negotiations).

Yet, Argentina's lack of urgency in programme negotiations comes as official sector debt repayments loom, and Argentina may, or will, need the IMF's help (a programme) to make them. This could help focus the government's mind on securing a deal and stop wasting time. Hence, the government's talk of delay could be another negotiating tactic, as it seeks to extract even better terms from the Fund, and/or it could force the government into taking a more constructive (or pragmatic) position; either way, if agreement can be reached sooner than later, it would be positive for the bonds. Otherwise, it could still be a long hard slog. 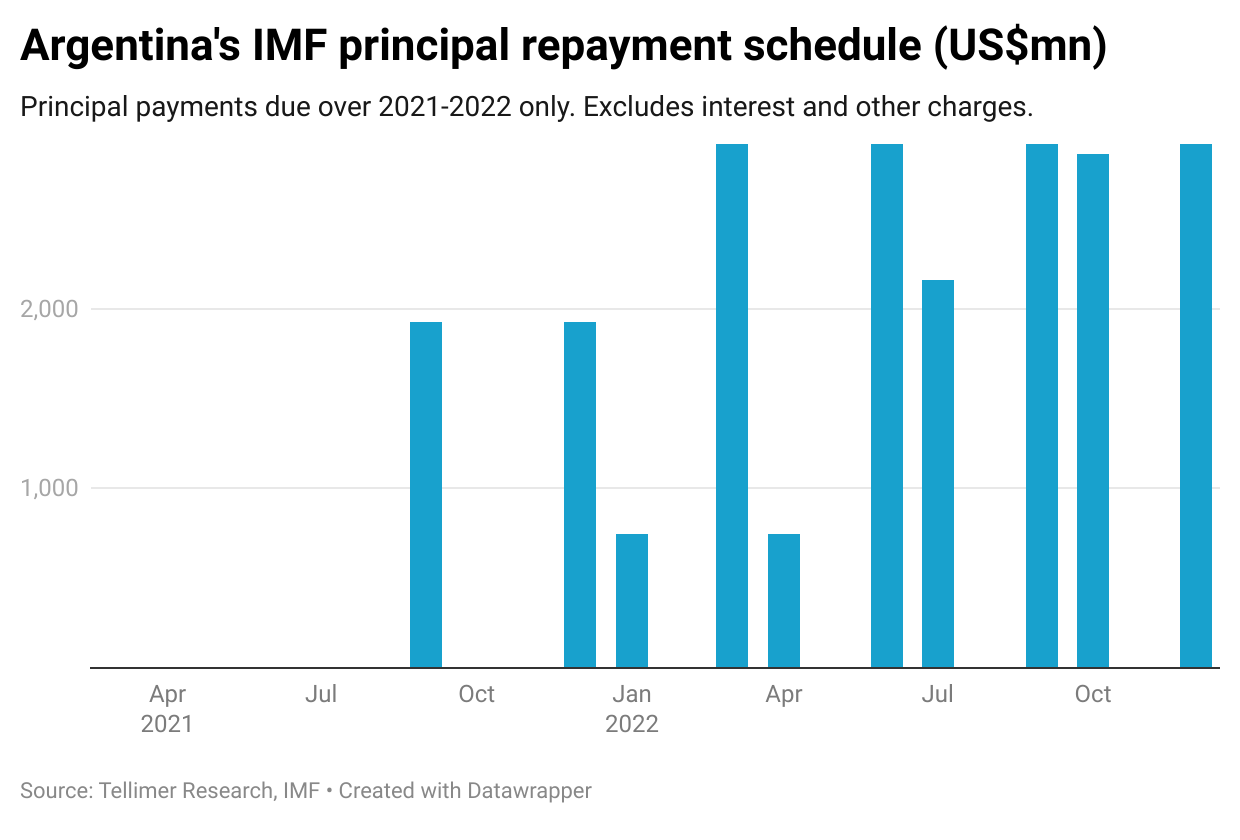