The IMF announced on 19 September that it had reached staff-level agreement on the second review of Argentina's new programme. The announcement is not a surprise as it follows the IMF managing director's statement last week, in which Kristalina Georgieva said staff-level agreement should be concluded in the coming days, following her meeting with the new minister of economy, Sergio Massa, and IMF staff's technical discussions with his team.

Argentina's new programme, a 30-month extended fund facility (EFF) for an amount of US$44bn (1,000% of quota), was approved on 25 March. The IMF Board approved the first review of the programme in June. The second review is expected to go to the Board in the coming weeks. Approval of the second review will allow the disbursement of US$3.9bn (and would bring total disbursements to US$17.6bn, c40% of the total available under the EFF).

In its statement yesterday, the IMF noted that recent decisive policy actions aimed at correcting earlier setbacks are helping to restore confidence and strengthen macroeconomic stability. Importantly, in the face of some uncertainty amid the recent changes at the economy ministry, it reiterated that the objectives established at the time of programme approval – including those related to the primary fiscal deficit and net international reserves (NIR) – will remain unchanged through 2023. The IMF stressed that "resolute policy implementation remains essential".

Performance appears to be satisfactory. The IMF noted that most of the revised quantitative targets through end-June 2022 were met, with the exception of the floor on NIR, which was due to higher import volume growth and delays in external official support. It noted that decisive policy steps to correct earlier setbacks and rebuild credibility had arrested a period of FX and bond market volatility. Net international reserves are programmed to rise by US$9.8bn during the course of 2022-23.

Fiscal policy continues to aim at a primary deficit target of 2.5% of GDP in 2022, and 1.9% in 2023, as underscored in the recently submitted draft budget. The IMF noted that improvements in public finances are being underpinned by: 1) better targeting of energy, water and transportation subsidies; 2) re-prioritisation of spending on critical investment projects and protection of poor households; 3) strengthened expenditure controls; and 4) efforts to review corporate tax incentives and strengthen revenue compliance.

The Fund's real GDP growth forecast for this year remains unchanged, at 4% (compared with 3% in the Bloomberg consensus), before moderating to 2% in 2023 (down from 3%) and beyond, in line with potential growth, while a gradual moderation in inflation is expected during the remainder of 2022 and 2023 after recent upward revisions to the inflation forecast. The IMF notes disinflation is helped by the positive real interest rates being delivered by the continued and consistent implementation of monetary policy

However, we note CPI inflation rose to 78.5% yoy in August, according to the official release for the national measure published last week, and is seen rising to 95% by year-end in the central bank's own monthly survey. Hence, further policy rate rises seem likely, with the BCRA's monetary policy rate now standing at 75% following its latest 550bps increase on 15 September, its ninth increase this year.

All in all, there are no real surprises here. The IMF programme remains on track, which is undeniably positive given the personnel changes at the Ministry of Economy and the uncertainty that produced, but it is still early days and the real challenge may still be to come as we move towards 2023 and an election year.

We maintain our Hold on Argentina's US$ bonds, with the 2030s priced at US$24.4 (yield of 36.6%) as of cob 19 September on Bloomberg (mid-price basis). Prices have risen 30% since their sub-20 lows in July, but have only returned to where they were at the time of the first review and are still down from the levels seen before programme approval as investor caution continues. 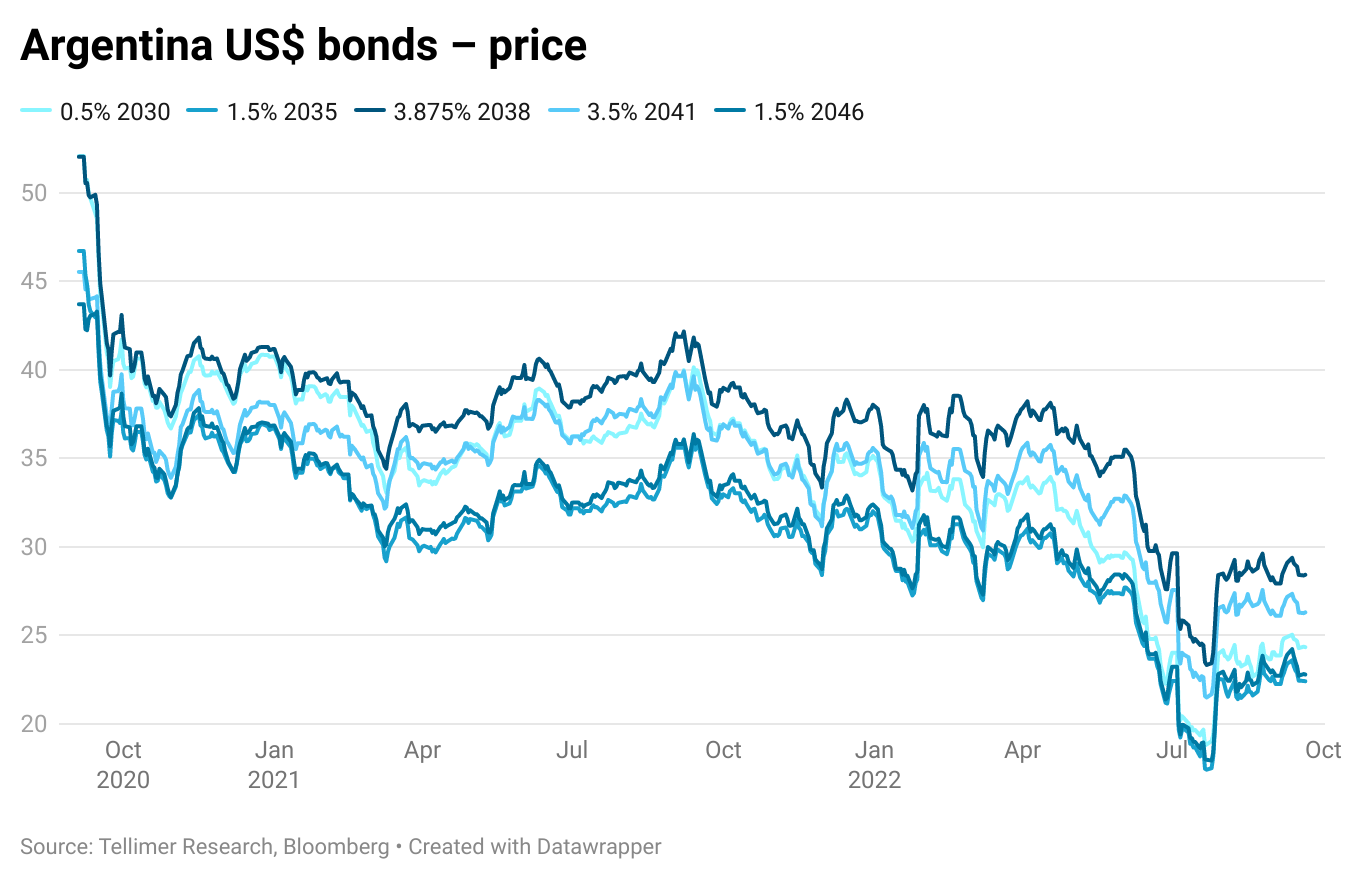