Argentina's economy minister, Martin Guzman, resigned on Saturday evening, according to reports, potentially throwing doubt on the future of the IMF programme and even signalling political manoeuvring ahead of next year's presidential election. The government named economist Silvina Batakis, a perhaps less well-known career policy maker but closer to the left, as his replacement on Sunday night. The weekend's developments may unsettle already nervous investors over Argentina's prospects.

Reports say that, in his resignation letter, Guzman – who had been there since the beginning under President Alberto Fernandez – pointed to internal divisions within the governing coalition, perhaps a veiled reference to the relentless pressure he's faced from vice president Cristina Fernandez de Kirchner's (CFK), and which he presumably felt made his role untenable. CFK has been critical of government policies, and the IMF programme, demanding increased public spending and the reversal of subsidy cuts.

Guzman's announcement came as a surprise and may have even caught the government, and the President, off-guard. That said, at the time of the staff-level agreement on the new IMF programme in March, we asked the question of how much longer Guzman would stick around.

The move also comes at an interesting juncture, after the IMF approved the first review of Argentina's new programme just last month (perhaps Guzman was waiting until after this to go), although the economy remains under pressure with, for example, CPI inflation seen heading towards 70%, while presidential elections are due next year.

It is not clear how things will improve under Batakis, seen as a Kirchnerite-backed appointment. Characterised as leftist in the media, she most notably served as economy minister in Buenos Aires province during Daniel Scioli's tenure as governor (2011-15). Her appointment reportedly followed lengthy discussions between President Fernandez, Lower House leader Sergio Massa, and CFK.

But these developments will be seen as a win for CFK while leaving President Fernandez weaker.

However, any attempt to appease CFK with an economy minister less committed to fiscal discipline and structural reforms could potentially put compliance with the IMF programme at risk, and further undermine investor confidence (although with the restructured foreign dollar bonds trading in the 20s, there is not much of this anyway), as would the appointment of someone who is more closely aligned with the Kirchnerite faction. On the other hand, if she doesn't get her way, CFK's criticism of government policies will presumably continue with an economy minister who remains committed to the IMF programme, and sticking to its fiscal goals, thereby only reinforcing the rift within government and adding to political and economic uncertainty.

Either way, it will cloud the outlook as we head into an election year.

We maintain our Hold on Argentina's US$ bonds, with the 2030s indicated at a price of US$24.0 (yield of 35%) as of cob 1 July on Bloomberg (mid-price basis). Unfortunately, the bonds are down c7.5pts (-24%) since we reiterated our Hold recommendation following the announcement of staff-level agreement on a new programme on 3 March, and which we've reiterated twice since then (and most recently here).

As we noted in the takeaways from our recent round of London client meetings, investors have been testing the idea of whether – with prices in the 20s – this has created an attractive entry point, although even then we think investors were pretty divided on the issue. The news of Guzman's resignation, and his replacement, may throw further caution on this view. 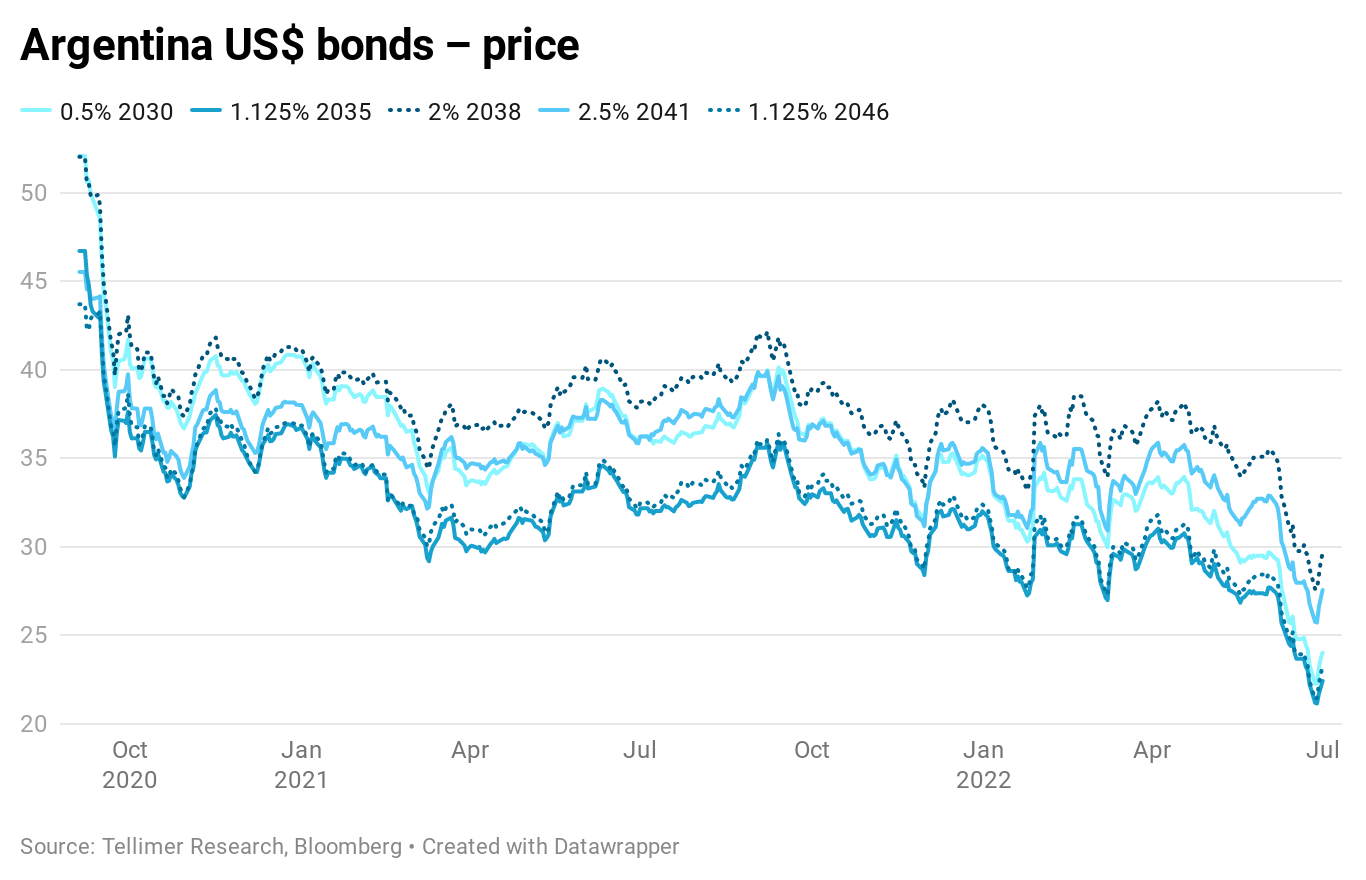