Argentina's government gave its long-awaited presentation to a local audience yesterday on its IMF proposals. Details were disappointingly scant (although we only have the government's press statements – here and here – and media reports to go on; a full transcript and the actual presentation don't appear to have been made publicly available). There did not appear to be much, if anything, new, and no substantive macro-projections were given. Instead, rehashing previous statements, it seems like a presentation the government could have given a long time ago.

The government's presentation comes after President Fernandez pledged after the mid-term election defeat in November to send a multi-year economic plan to Congress in December (which didn't happen) and the IMF's statement on 10 December following staff meetings with a technical delegation from Argentina. On the back of this, one might have expected there was more to say, and show.

It also follows the IMF Board discussion on 22 December on the ex-post assessment of the 2018 stand-by arrangement (SBA), which found that "the program did not fulfill the objectives of restoring confidence in fiscal and external viability while fostering economic growth". Directors concluded its "findings should inform the ongoing discussions on a potential follow-up program with Argentina." Perhaps that cover is what Argentina has been waiting for. Although rather than heed the lesson that "the program’s strategy and conditionality was not sufficiently robust", Argentina appears to be drawing a different conclusion.

Crucially, and to no great surprise, the government emphasised that the solution was growth, and while few will argue with its importance, Argentina seems to think this is somehow exogenous (although presumably not in a neo-classical sense) and not a function of its own policies. Besides strong agricultural prices (a positive terms-of-trade shock), it is not clear where growth is going to come from, absent a credible policy framework.

Minister Guzman said the core area of disagreement with the IMF lies in the fiscal path; and while there may be agreement in other areas, we note lack of agreement on the fiscal side is not a trivial matter. The government said the IMF's proposed fiscal adjustment would stop the economic recovery (although it didn't give any details on what that adjustment was or specific numbers on what the government is proposing).

Indeed, President Fernandez said the word adjustment had been "banished" in IMF discussions. Sure, this may be aimed at appeasing a domestic audience but failure to recognise this does not bode well for programme design and ownership.

Fernandez did say that they are discussing how to repay the IMF debt over 10 years in the best-case scenario.

We maintain our Hold on Argentina's US$ bonds, with the 2030s priced at US$33.9 (yield of c23%) as of cob 5 January on Bloomberg (mid-price basis), marking a one-month low. As we noted in our Top picks for 2022, with such depressed prices, Argentina could be the trade of the year if policies are normalised only a little bit and IMF programme discussions make tangible progress. And the approaching March deadline to avoid a default to the IMF and Paris Club provides a strong incentive to get a deal done. However, yesterday's presentation does not provide much optimism that a deal is within reach anytime soon. 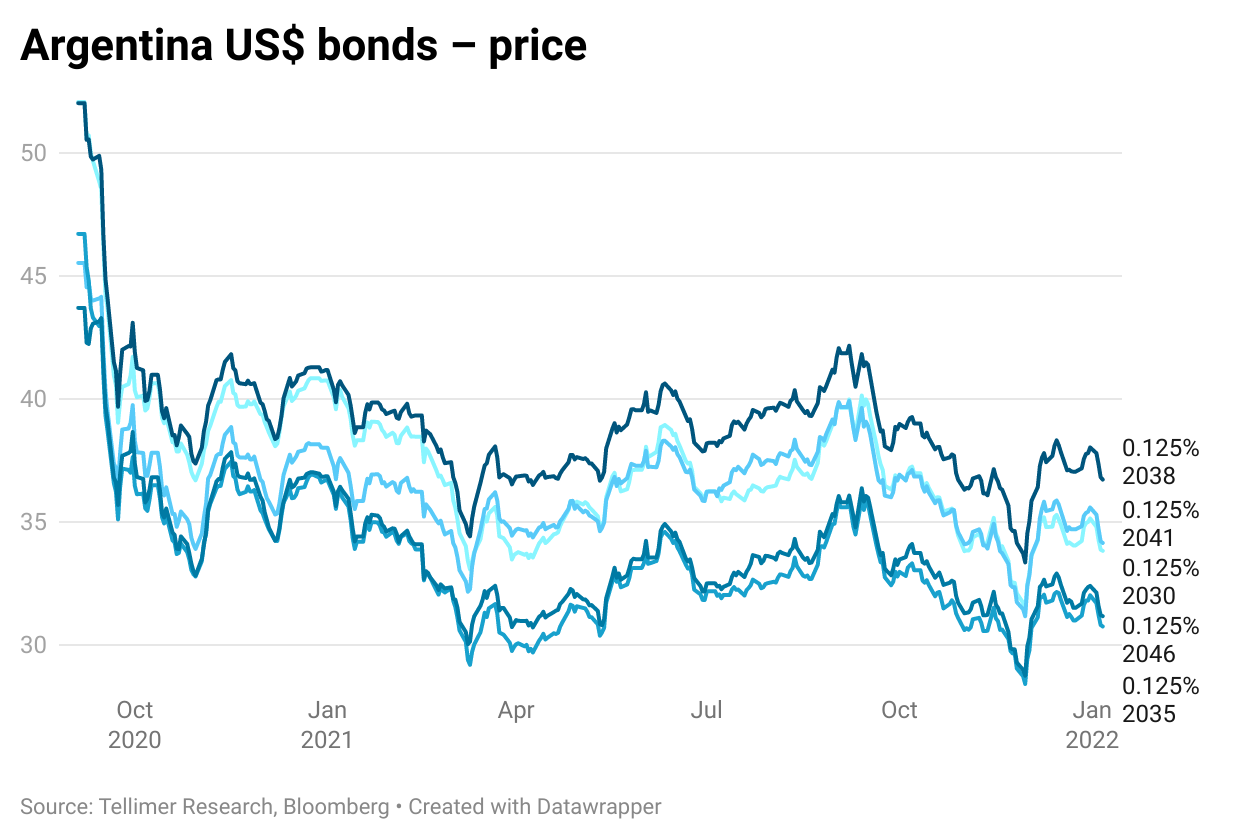