I wonder how many times a sovereign debt investor has to buy and sell Argentina before earning their stripes? Perhaps too few enjoy a career in a senior enough position for long enough to span three defaults (2001, 2014, and 2020 in the case of Argentina).

Because the investment case in Argentina equities is largely a derivative of the sovereign debt investment case discussion, the same likely applies to fund managers in EM equities. The difference is that most EM equity funds do not have to care about Argentina (it is merely 13bp of MSCI EM and 170bp of MSCI LatAm).

This may change for FM funds if Argentina is ejected from the EM index by MSCI (possible at any time) and reclassified as FM or Standalone. (Argentina is already slated for a shift in the FTSE indices from FM to Unclassified in September 2020).

A history of nine sovereign defaults and little chance of the reforms necessary to avoid (ultimately) another one (even if Alberto Fernandez is not cut from the same Peronist cloth as Cristina Fernandez) should put anyone off Argentina equities.

There are plenty of other country investment cases in small EM and FM which are not as cheap but cheap enough, not as liquid but liquid enough, and with better long-term growth and lower long-term risk: eg Pakistan, Philippines, Vietnam in Asia.

But we explore below why some might agree with all of this but still be tempted by Argentina. 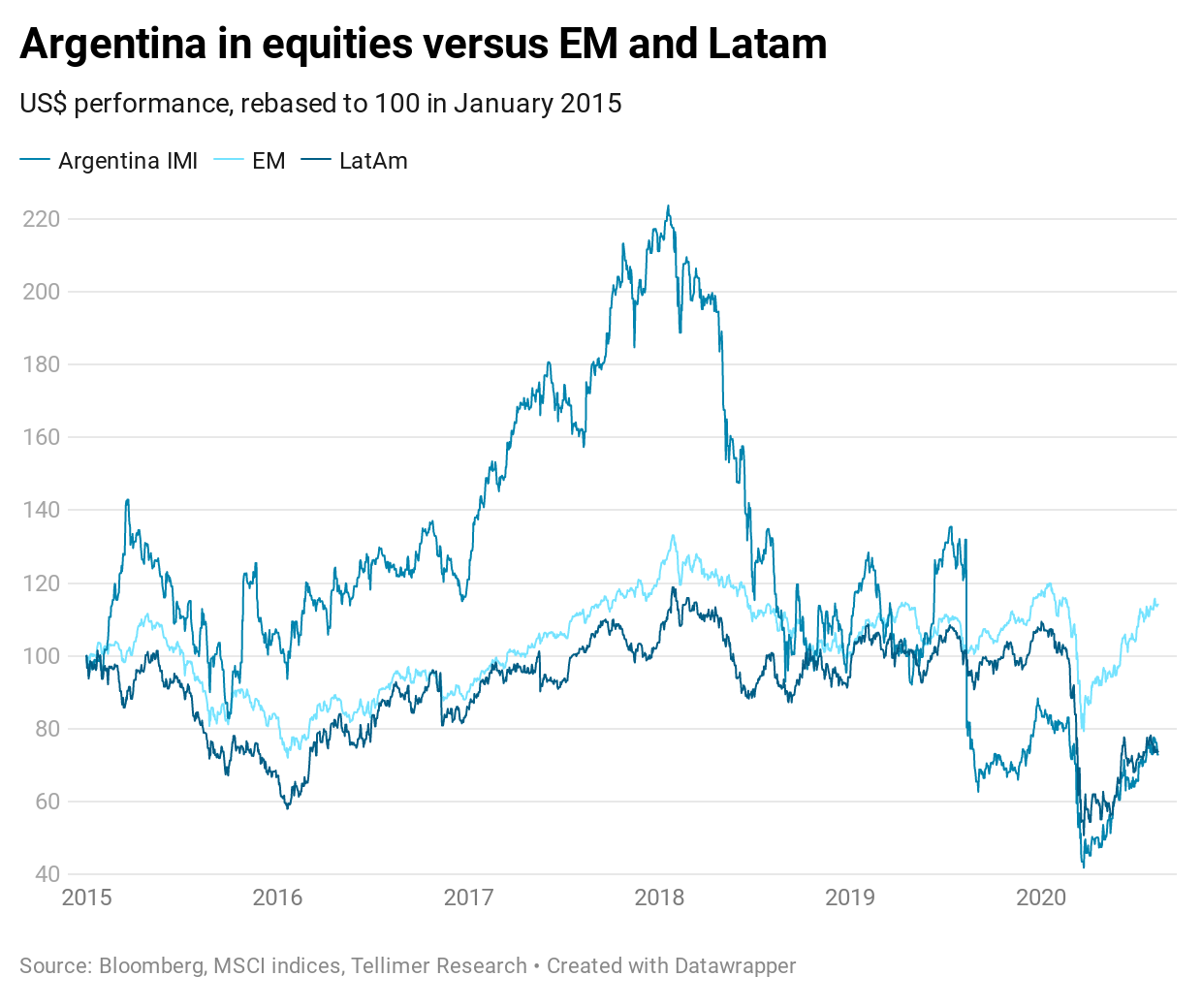 This time is not different

There are some aspects of the latest sovereign debt default in Argentina which are different from the ones in 2001 and 2014.

What is unchanged from previous sovereign debt defaults in Argentina is the social and political obstacles in the way of the deep-rooted reforms (public and private sector wage restraint, overall inflation control, fiscal spending cuts, restoration of credibility and convertibility of the currency).

These obstacles mean that any government (Peronist or not) will struggle to stay the course on difficult reform. Even the leadership team of Macri's Cambiemos coalition (which initially filled many foreign investors with an almost euphoric sense of hope) pivoted from the shock and awe of its first year in 2016 (with external debt settlement, policy rate hikes and stringent fiscal austerity commitments) to a much watered-down, gradual approach (with significantly softer inflation targets) as its attention turned to the next electoral cycles (starting in October 2017) and the economic growth it needed to deliver to win votes.

The next elections (for the legislature) are due in October 2021, a little over a year away.

Can something so wrong feel like the right thing?

If we assume that Argentina will not successfully restructure its economy and grow at a fast and consistent enough pace to avoid default in the future, can a case still be made for its equities?

However much it may feel like shaking hands with the devil, it is worth pointing out four candidate reasons.

The other markets in EM and FM on similar valuation discounts relative to history are Dubai, Mauritius, Philippines, Sri Lanka, Tanzania, and Ukraine: all markets with a fraction of the liquidity and with no ADRs.

Dipping a toe beyond Globant and Mercadolibre

One of the additional issues in Argentina is that throughout the crisis, two stocks (both listed in the US) have massively outperformed because of their largely non-Argentina revenue streams:

Valuations of these two outperformers do not, at a cursory glance, look like attractive entry points: Globant is on 9.8x EV/trailing sales and Mercadolibre is on 18.8x (neither stock pays a dividend and Mercadolibre has negative earnings).

Stocks (with over US$1m ADV) in domestic-oriented sectors like banks, consumer, telecom, and utilities are down 20-45% and YPF in oil and gas is down 49%.

The conundrum facing anyone prepared to dip a toe beyond Globant and Mercadolibre is that the domestic stocks will likely bear the brunt of further macroeconomic turmoil (loan defaults in the banks, adverse tariff and tax revisions in utilities and telecom, demand weakness in the consumers) but it is also these stocks that likely outperform if a line is drawn under the sovereign debt renegotiation (with, presumably, an IMF loan renegotiation to follow, although this may take many months to complete); at least until questions are again asked about the stickiness of inflation or the temptation to water down fiscal commitments as the next election approaches. 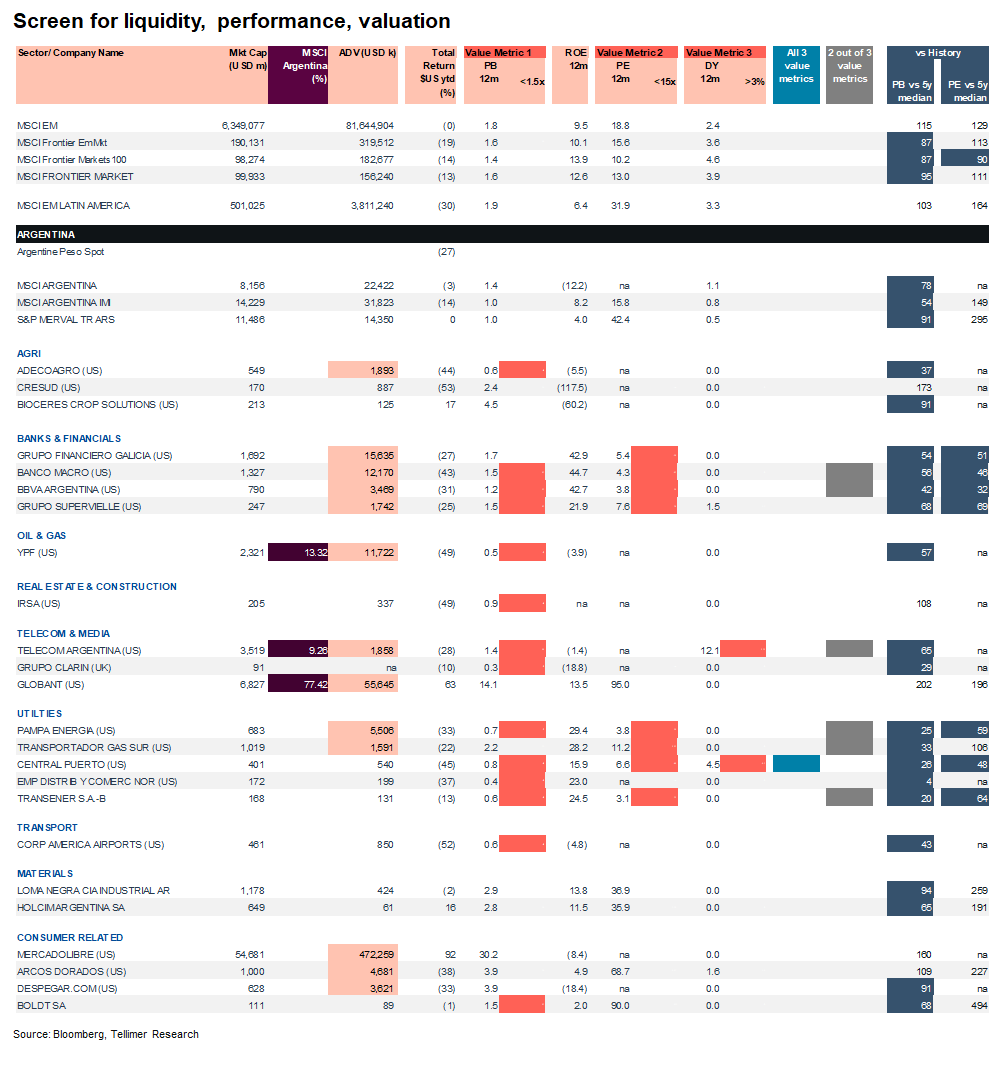 Argentina: What next after the restructuring agreement (Culverhouse)