Another day, another change to FX policy. Argentina’s central bank announced yesterday further changes to its FX regime, the third set of changes to the currency regime since February on our count (and excluding other policy changes to the monetary base target and interest rates).

In short, the central bank has effectively abandoned its non-intervention zone (NIZ), the cornerpiece of its FX policy since October, and is pretty free to intervene as it likes to stabilise the peso (within reason), replacing what it had set out as a carefully constructed rules-based FX intervention policy with a largely discretionary one.

Here, we set out some thoughts on what this means for the macro situation and our views on top-down equity strategy.

What has the central bank announced?

The central bank will now:

At the lower end of the NIZ, the central bank confirmed its previous position that it will not buy foreign currency until June 2019 if the peso strengthens below US$39.8 (although that is academic at the moment, given the peso’s performance). 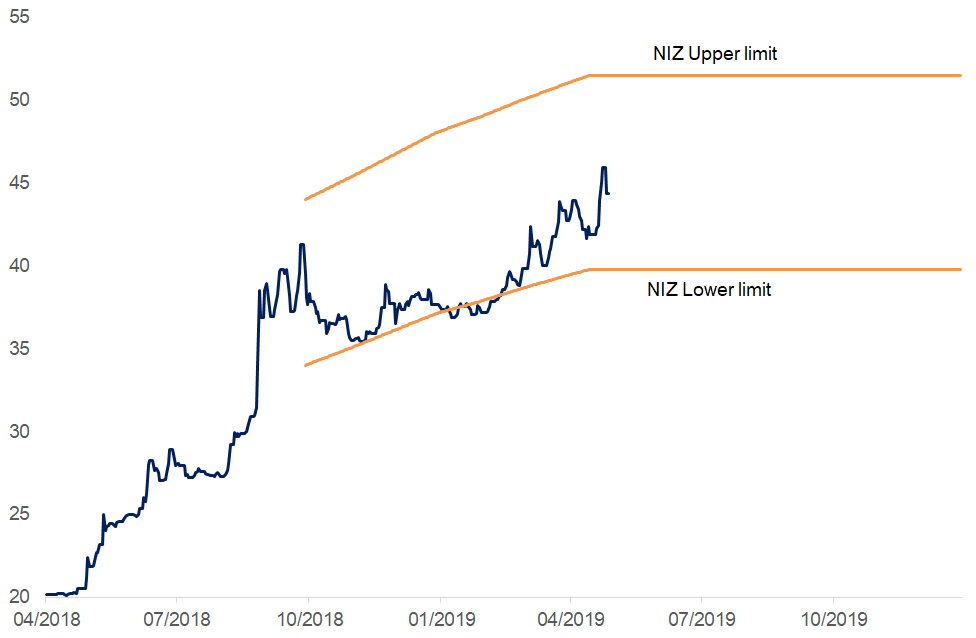 The market seemed to welcome the latest initiative. The measures allowed the authorities to stabilise the peso yesterday, although we do not yet have the central bank’s intervention data on how much it spent to do so. Presumably, the central bank’s objective is to manage the currency for as long as it can (or is deemed necessary) through the pre-election period, to reduce currency volatility, limit the inflation pass-through, anchor expectations and minimise the cost to growth of what otherwise might require even tighter monetary policy (higher interest rates), but at the expense of lower reserves.

Given the main driver of the currency is politics (amid market concerns over a policy shift if Cristina Fernandez de Kirchner [CFK] is elected), we presume it might have to continue to manage the peso this way until the October elections (or June, if CFK announces she is not standing, or August, depending in the outcome of the primaries) – see our Trip Report following the IMF Spring Meetings published on 26 April for background.

However, the central bank’s new intervention approach will only be effective for as long as it has the resources to undertake the necessary intervention. With gross reserves of US$72.1bn (as of 25 April), the central bank would appear to have enough ammunition to keep the peso stable for a while. Assuming it spent US$100mn a day until the elections in October (26 weeks away), that is cUS$13bn in FX sales. And the IMF should have two more disbursements of US$5.4bn each before the election, to offset this draw down.

However, that is gross reserves, and the true amount of ammunition is much lower and is given by non-borrowed net international reserves (NIR) – that is, gross official reserves minus gross official liabilities (which includes IMF money and other FX borrowings, as per the IMF programme’s technical memorandum). NIR in September 2018 were only US$15.7bn and the target in the IMF programme for end-19 is US$19.2bn (against gross reserves projected at US$62.2bn) – ie the implied amount of gross official liabilities is cUS$40bn (which, not coincidentally, is largely the sum of IMF disbursements by then; although we have not accounted here for how much IMF money goes to reserves and how much for budget support). We would expect, however, the IMF to recalibrate the NIR floor if necessary in the next couple of reviews (before the election).

If the election outcome is one that ensures policy continuity (and ongoing IMF compliance), then confidence could return quickly, and the peso could be allowed to move more freely over time (as FX reserves are replenished). As such, the new FX measures essentially seek to buy six months of stability, after which things can then return to “normal”.

However, if the election produces on outcome that fails to provide continuity, all that managing the peso does now is build up problems for the future, leaving the country with less reserves, with an overvalued exchange rate and, potentially, more likely to default – this might be a useful discipline device for any new president, but it could also make policy choices (and IMF engagement) even harder.

Thus, in many ways, we think the most potent monetary policy lever would be persuading CFK not to stand! Inevitably, she and her political strategists are more likely to see the current currency crisis as a failure of Macri's economic policies and a siren call for her to take over, rather than a response to the perceived threat she poses to macroeconomic discipline.

Besides the technical issues, the other issue here for us concerns policy credibility. This is in two regards. First, the central bank is firefighting, and with so many and frequent policy changes – which, frankly, are hard to keep up with – risks damaging credibility even more. FX and monetary policy are hardly providing a predictable backdrop to entice foreign investors and may even be contributing to currency volatility. Second, IMF credibility risks being pulled down by Argentina too. The IMF came out in support of the new changes (see its statement here). But if this new policy is now “well calibrated to the challenges facing Argentina”, what were previous policies?

The risks are as follows:

The performance and valuation of the equities suggest these risks are well understood.

We do not dispute the severity of the top-down risks at play. But we reiterate our list of conditions under which Argentina equities nevertheless perform well for a frontier and small emerging portfolio this year:

This is a long and uncomfortable list of conditions. But we also believe that the ADR nature of the largest Argentina stocks means that the hurdle for investment is far lower than for other distressed investment cases in further-flung parts of the FM and small EM universe (eg Nigeria, Oman, Pakistan, Sri Lanka). A small change in global risk appetite can trigger a large swing in the LatAm portion of mainstream EM equity funds back to Argentina.