19 May 2019
Published by
Tellimer Research

Former two-time, populist Peronist President (2007-15), Cristina Fernandez de Kirchner announced on 18 May that she will run as a Vice Presidential candidate in the October 2019 election, as a running mate to Alberto Fernandez.

For some, any involvement of Cristina in the election will cause concern, given her history of non-orthodox economic policy and continuing popular support (opinion polls suggest one third of the electorate would support her in a direct run-off).

However, this is not the announcement that would have created the most concern for incumbent President Mauricio Macri or foreign investors wishing to see austerity policies continue, in the way that a combination of Cristina with one of the well-known moderate Peronist candidates (e.g. Lavagna or Urtubey) might have.

Alberto Fernandez was Cabinet chief in the 2003-07 government of Nestor Kirchner (Cristina’s deceased husband) and, briefly in Cristina’s first term (resigning after failing to see through a proposal for higher taxes on agricultural exports).

His last role was to organise the Presidential election campaign of Sergio Massa (a fellow Peronist who was Alberto Fernandez’ replacement as Cabinet chief in 2008, defeated the Cristina-allied Peronist candidate in the party primary for Presidential candidate in 2015 and ended up winning 21% of the vote in the first round of the 2015 election). He has not been mentioned locally over the past year as one of the potential Peronist Presidential candidates (in contrast to Lavagna, Massa, Pichetto, Schiaretto, Unac, Urtubey and, of course, Cristina).

Historically Alberto has not acted as a parrot for Cristina's views (disagreements acknowledged in Cristina's announcement). Therefore, he provides a potential bridge between Cristina and her internal party opponents and his success in building this is the new thing to watch, alongside Macri opinion poll ratings, in the run-up to the 11th August Presidential primaries. Nevertheless, the fact that Alberto's Presidential candidacy was announced in a video from Cristina makes it plain where the power rests in this partnership (an observation that will not be lost on those who regard themselves as credible Peronist Presidential candidates).

The Alberto-Cristina ticket does not, at this stage, represent a reconciliation between Cristina and a significant portion of the Peronist dissidents (even the ones with a more radical shade like Massa) who parted ways with her in 2015. 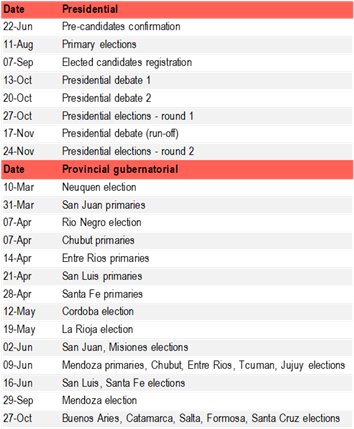 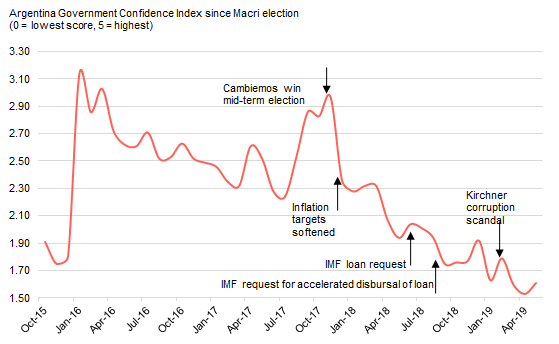 Of course, the FX rate remains vulnerable and volatile, a hostage to US rate outlook and global risk appetite. But Argentina stocks reflect a lot of the top-down risks already and if global conditions are sufficiently benign and the Peronists remain too divided to win, then those stocks could still do well from this point.

Argentina is by no means a favourite global small Emerging equity market for us. However, we acknowledge that it often does not “play by the same rules” as peers because of the high degree of accessibility (resulting from its mainly ADR listings) and the large pool of dedicated LatAm assets (during a time when most of the alternatives have their respective material risks, e.g. Bolsanaro administration divisions in Brazil, AMLO market-unfriendly policies in Mexico, commodity price pressures in Chile and Peru and insecurity and fiscal budget pressure in Colombia).

At this stage, we prefer the Banks (the larger listed ones, GGAL, BMA, BFR, are on 2.4x trailing PB with 35% ROE, and the smaller one, SUPV, is on 1.3x PB with 16% ROE). Two sectors which should offer business model protection against FX weakness are Oil & Gas and Utilities. However, YPF (up 15% ytd) is already among the better performing Oil & Gas stocks in small EM. Although Utilities such as PAM enjoy US$ protection in their contractual tariffs, there is surely a risk of revision of these contracts should fiscal pressures persist and other avenues for consolidation run into political opposition. 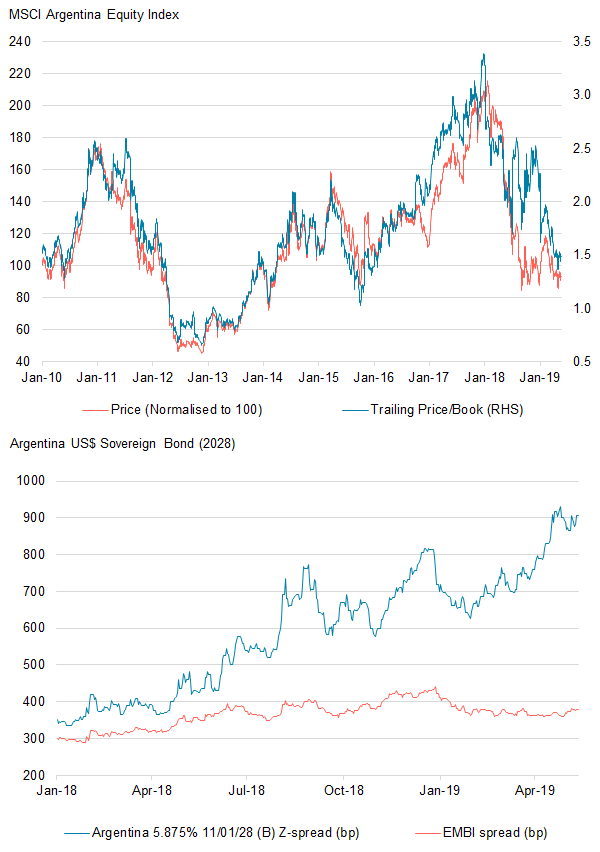