The USD is on the front foot and has surged again this morning on news that Russia would not be opening its gas pipeline as originally planned. This is likely retaliation for the price cap the EU wishes to impose on Russian energy. The EU now finds itself in the awkward position of prolonging the cost-of-living crisis and the relative scarcity of energy through the Northern Hemisphere winter on principle or choosing to soften its stance on Russia. Given the number of protests that are unfolding throughout Europe at the moment, the political pressure is building on politicians to approach this differently. The EUR and the GBP have found themselves under considerable pressure, with the EUR about to punch through 0.9900, while the GBP is now trading comfortably below 1.1500. The JPY, for its part, continues to trade above 140.00 and the combination keeps the USD well supported.

Botswana: Namibia’s Mines and Energy Minister Tom Alweendo has said that the offshore oil and gas discoveries by TotalEnergies and Shell are of commercial quantities, likely in the billions of barrels. Earlier this year TotalEnergies and Shell announced that they had made “significant” discoveries offshore Namibia and are currently making assessments. According to Alweendo, “the companies are cautious but have talked about commercial quantities in billions of barrels. The commerciality is there. They basically want to make sure that before they commit to production investment, they know what exact quantities are there.” The discoveries by TotalEnergies and Shell could make Namibia the latest oil producer along the African Atlantic coast, bringing significant benefits to the economy.

Ethiopia: As part of measures aimed at drawing investment from abroad, the Ethiopian government has decided to open up the country’s banking sector to foreign investors. According to a statement from Prime Minister Abiy Ahmed’s office, the opening up of the sector will make it easier to do business in the economy, facilitate the supply of foreign currency, create jobs, and boost access to technology. Prime Minister Ahmed, who came into power four years ago, has been working to open up various economic sectors, including the telecommunications industry, to help drive foreign investment flows and bolster overall economic growth.

Kenya: The Central Bank of Kenya, in its quarterly economic review, reported that the country’s oil import costs rose by 38% in Q2 compared with Q1 on account of higher prices. Oil imports increased to $1.57bn from $1.14bn in the prior quarter and almost doubled from $778mn in the same period in 2021. Kenya relies heavily on imports of petroleum to meet its energy demands, and higher prices this year have led to deteriorating terms of trade and a dollar shortage, pressuring the Kenyan shilling.

Angola: Political uncertainty continues to heighten in Angola after the main opposition party formally rejected the outcome of the August presidential vote won by the ruling party and refused to concede. The National Union for the Total Liberation of Angola, known as Unita, lodged complaints with the country’s National Electoral Commission and could take the matter to the Constitutional Court, according to their party leader. Angola’s National Electoral Commission declared the ruling Popular Movement for the Liberation of Angola, or MPLA, the winner with 51% of the vote, while Unita received 44% after a final count. The result gives President Joao Lourenco a second five-year term to lead the country.

Nigeria: In a recent speech at the Center for Global Development, Vice-President Yemi Osinbajo said that creditors should consider forgiving poor countries’ debt in return for a commitment to using outstanding payments on programs to mitigate climate change. Osinbajo added that in addition to freeing up government budgets, such a plan would enable creditors and debtor nations to allocate the spending on their so-called National Determined Contributions (NDC). The NDCs, agreed in Paris in 2015, represent commitments by countries to reduce greenhouse-gas emissions and adapt to climate change. Osinbajo also said that Africa would require a fourfold increase in investment to achieve the energy mix needed to limit global warming to 1.5 degrees Celsius. The continent needs $40bn a year, quadruple the amount that’s been invested since 2018, to provide its citizens with access to clean energy sources, according to Osinbajo.

Zimbabwe: Zimbabwe’s Finance Ministry has banned government ministries and local authorities from charging fees and levies in foreign currency. The ban comes after concern from Treasury that “some government agencies as well local authorities are now advertising in the media prescribing payment for some services exclusively in foreign currency,” according to the country’s finance secretary. The Zimbabwe dollar currently trades at 546.82 to the US dollar but changes hands for as much as 750 on the parallel market, making it attractive to be paid in foreign exchange. The Zimbabwe dollar’s deprecation has driven inflation which reached 285% last month.

The latest data from the Central Bank of Nigeria (CBN) showed that foreign currency reserves halted two months of increases in August. Foreign currency reserves fell by 0.50% or $194.34mn to $39.02bn in August. The fall in Nigeria's foreign exchange reserves came despite the oil price remaining above the benchmark set by the Federal Government in the 2022 budget, highlighting how Nigeria is failing to capitalize on still higher-than-expected oil prices. For context, crude oil averaged around $98 per barrel in August, which compares with the Federal Government's benchmark of $62 per barrel. 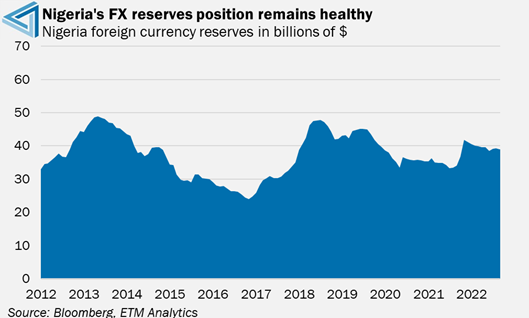 The August drop adds to the broader declining trend, with Nigeria's foreign currency reserves falling in five out of the past eight months amid dwindling oil production due to theft and vandalism and continued CBN intervention to prop up the naira. Nigeria last week said that it's seeking to implement a security infrastructure similar to that of Saudi's Aramco to protect its oil pipelines and curb theft which has seen the oil sector contribute negatively to its GDP and miss its OPEC+quota this year.

Fixed Income: Egypt, Ghana and Zambia are attracting the most attention in Africa's fixed income space

There are three main African countries on the radar of investors at the moment, namely Egypt, Ghana and Zambia, all of which find themselves in a position of fiscal distress. Another factor in common with these three countries is the need for fiscal support from the International Monetary Fund. After months of delays, Zambia finally secured a much-needed deal with the IMF last week, which has provided a boost to investor confidence towards the country.

While Egypt and Ghana are both in talks with the IMF, both countries are yet to secure fiscal support programs from the international lender. While Egypt has been the golden child of Africa for investors over the past three years, with the country offering some of the most attractive real yields in the world, the country is struggling to maintain its status as one of the most attractive investment destinations in Africa. 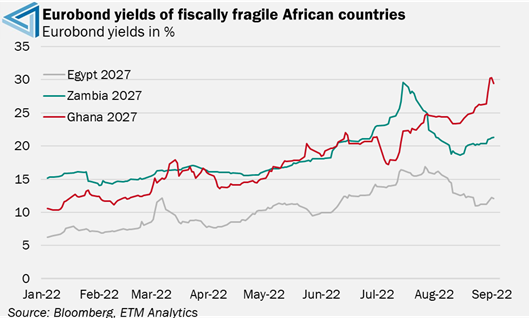 Egypt’s struggle to regain the trust of investors and entice foreign capital flows to the local bond market is adding to the urgency for the government to secure a deal with the IMF. According to data tracked by Bloomberg, the sale of local currency bonds has plunged 38% in the 8 months through to August compared to the same period in 2021, where local currency bond sales came in at $81bn. While investor sentiment toward Egypt has deteriorated, we expect the government to secure a deal with the IMF of between $4bn and $6bn before the end of the year. Should this materialize, it would provide a tailwind for Egyptian bonds.

Another factor adding to the fiscal pains for Egypt is the marked deterioration in macroeconomic conditions. Data released this morning showed that Egypt’s economy-wide PMI remained anchored in contractionary territory in August, with the headline PMI reading coming in at 47.6. That said, the PMI report suggests that Egypt’s non-oil economy registered a softer decline in operating conditions in August, as easing inflationary pressures helped to alleviate spending constraints at clients and led to slower decreases in output and new orders. While respondents remain relatively downbeat about the economic outlook for Egypt, the fact that there was a broad softening of input cost pressures is encouraging and should help provide some reprieve for Egyptian bonds.

Given the sensitivity of financial markets to inflation and monetary policy dynamics at the moment, it is worth having a look at the latest United Nations Food and Agriculture Organization world food price report. Note that the main drivers of the marked acceleration in global inflation this year have been food and energy prices. The FAO Food Price Index fell for the fifth consecutive month in August. 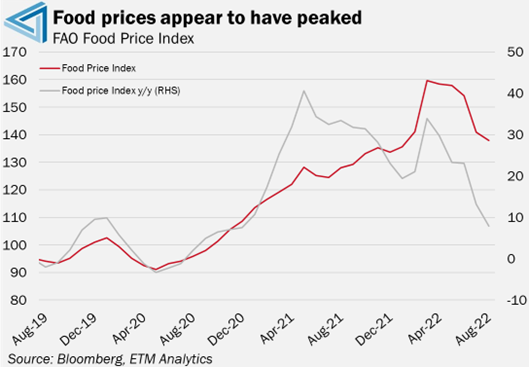 Specifically, the Food Price Index was 1.9% lower in August than in July. Despite the month-on-month drop, the index remained 7.9% above its value a year ago. All five of the sub-indices fell moderately last month, with the most significant decline being in vegetable oil prices (-3.3%) and the smallest decline in cereal prices (-1.4%). The decline in the index indicates that global food prices may have peaked. The main factor resulting in declining food prices has been the increase in grain exports from Ukraine. Vegetable oil prices meanwhile have fallen as more palm oil supplies from Indonesia, and seasonally rising outputs in southeast Asia have pushed prices down.

Looking ahead, while it is encouraging that global food prices fell for a fifth straight month in August, the risks to the outlook for world food prices remain titled to the upside. This is partly a function of increasing processing costs due to high energy prices and curbed fertilizer usage as a result of exorbitant global fertilizer prices. Meanwhile, severe drought conditions are affecting crops in the EU and US, which may also result in smaller harvests. For Africa, which is largely dependent on food imports, this suggests that risks to the regional inflation outlook remain to the upside.