Gold recovered overnight however the yellow metal has experienced mild pressure in the Asian session but is still holding north of the $1895.00/oz mark. A stronger USD has taken the shine off bullion forcing short term punters to shed long positions. Strategic investors are sidelined at the moment, waiting for fresh input from the US inflation data due later this week, which could result in an adjustment of monetary policy outlook for the US.

For now, the weaker than expected US Non-Farm payrolls data last week has quelled fears of an early taper, however price action is likely to remain choppy across the precious metals complex as tactical investors jostle for position to take advantage of headline driven price action.

Today is the day when we could see the last of the open outcry markets in Europe fade into the annuals of history. The London Metals Exchange will tell its members whether or not the floor will close for good today, switching to fully electronic trading, a move strongly opposed by many of those that use the exchange.

South Africa: Today will see the release of South Africa’s Q1 GDP report. Economic activity in the first quarter of the year is estimated to have continued its recovery but remained below pre-pandemic growth levels due to Covid-related shocks and the reintroduction of coronavirus restrictions. Even though the print is expected to highlight an uneven recovery, with some sectors recovering at a more rapid pace while others lag, there has been a broad improvement in consumer and business confidence and demand dynamics. However, for the recovery to continue at a significant pace going forward, we will need to see increased investment levels, the swift implementation of reforms and a declining unemployment rate.

Nigeria: Nigeria’s battle with Twitter continues. The National Broadcasting Commission of Nigeria announced that it has begun drafting new rules that will require Twitter Inc. to have a license to operate. These new rules come after the government banned the platform in Nigeria on Friday. On top of the ban, the broadcast regulator also ordered all broadcasters to suspend “patronage of Twitter immediately” and stop using the social media company as a “source of information gathering for news and programs.”

Kenya: Data from the Central Bank of Kenya shows that mobile phones transactions are increasing. Mobile-money transactions rose from KES 308bn in April last year to KES 502.2bn in April this year. Mobile money accounts rose by 13% to 67.1mn. This could be attributed to the restrictions imposed during the outbreak of COVID-19 and social distancing practices that forced people to transact through their mobile phones.

Uganda: Against the backdrop of a surge in coronavirus infections, the Ugandan government tightened lockdown restrictions on Sunday. The government ordered schools and places of worship to close and restricted public transport between regions for six weeks to contain the spike in infections. The Ministry of Health said infection rates in Uganda climbed 26% since the start of May to more than 52.9k cases on Sunday, while deaths rose by 12% to 383 during the same period under review. The re-imposition of a strict lockdown has clouded the near term outlook of Uganda’s economic recovery.

Egypt: Egypt will host the first forum of the heads of African investment promotion agencies (IPAs) on June 11-14 in Shram El Sheikh under the slogan “Integration for Development.” This event will be attended by ministers and chairpersons of investment authorities from 34 African countries of African economic institutions, and the forum backs efforts aimed at achieving one of the goals of AU agenda 2063 that is bolstering inter-African investment to boost growth.

Ghana: The Bank of Ghana continues to back a new Development Bank of Ghana. Responding to concerns expressed by the public and specialist analysts about the rationale behind setting up a new development bank, central bank Governor Dr Ernest Addison said that the new bank will not suffer the same ill-fate as previous ones did. Strict supervision has been placed at the core of the new bank’s success. The governor said that the new Development Bank of Ghana will be supervised the way commercial banks are supervised and will be held to the same level of standards in terms of corporate governance.

Egypt: Egypt’s Finance Ministry reported that the country is preparing to issue Sukuk or sharia-compliant Islamic bonds upon approval of the draft law by parliament. The issuance of Sukuk bonds will help the government achieve its financial, economic and development goals by diversifying the sources that will finance the state budget. Sukuk bonds will also help finance the country’s deficit and government projects. Egypt is planning several mega projects, which could see borrowing needs rise by 7.1% to $68.1bn. The Sukuk bonds will likely offer a cheaper way of raising funds to invest in these projects than ordinary local currency treasury bonds.

Forex: Botswana Pula extends its gains against the USD to a fourth consecutive session

The rally in the Botswanan Pula (BWP) continues with the currency advancing for the fourth straight session yesterday to trade at its strongest level against the USD since the second half of 2019. Specifically, the BWP appreciated by 0.85% against the USD over the past four sessions. It is worth highlighting that the BWP is the third-best performing African currency in the second quarter of the year.

Since the start of Q2, the BWP has gained 4.60% against the USD, which is more than the 2.62% recorded during the same period last year. The strengthening in the BWP is being underpinned by soaring global commodity prices, the easing of lockdown restrictions, relatively sound fiscal dynamics and optimism of a solid economic rebound. The broad-based US dollar weakness and expected improvement in global demand for diamonds are other factors providing a tailwind for the cross.

Looking ahead, with the US dollar expected to remain under pressure against the backdrop of looser for longer monetary policy and ballooning twin deficits and expectations for a rebound in demand for diamonds and travel, the outlook for the BWP remains bullish.

Fixed Income: Foreign ownership of SAGBs reaches an 11-month high in May 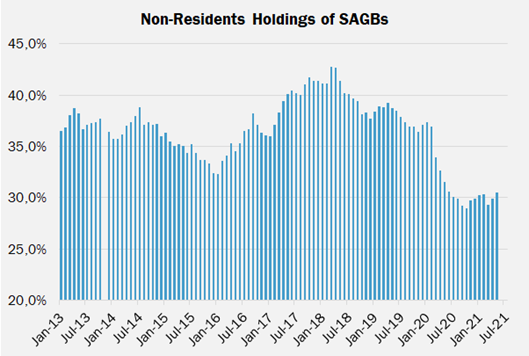 Despite mounting fiscal challenges, improved sentiment and the search for high-yielding debt is underpinning demand. Expectations for the South African Reserve Bank to keep interest rates on hold in the coming months is adding to the attractiveness of SAGBs. The reading, however, compares with an ownership level of 31.5% in the corresponding month of 2020 and remains below the average for that year.

Looking ahead, South Africa’s fiscal risks are tilted firmly to the upside, but loose monetary policy offshore is set to continue supporting SAGBs and SAGB demand. Therefore, we could see foreign ownership continue to rise in the coming months as the search for high-yielding debt persists in the near term. South Africa’s high carry appeal should continue to underpin foreign ownership of SAGBs in the months ahead.

Data released on Monday showed that investors added more than $1bn for a third straight week. Specifically, investors added $1.42bn into emerging market ETFs in the week ending June 4, bringing the total inflows for the year to $29.3bn. Note that last week marked the 31st consecutive week of net inflows into emerging market assets. As was the case in the week prior, the inflows were predominantly into equity-focused emerging market ETFs, which expanded by $1.3bn last week. Bond funds meanwhile rose by $120.1mn.

In Africa, South African based ETFs once again attracted the biggest inflow last week, while Mozambique recorded the largest outflow of following withdrawals from the Vanguard Emerging Markets Government Bond fund. The strong inflows into US-listed emerging market ETFs coincided with a notable increase in the MSCI Emerging Market Index last week. Looking ahead, current global risk conditions suggest that inflows into emerging market assets should continue in the coming months. Only once we start to see more concrete discussions on tapering by major central banks will we start to a reversal of capital. 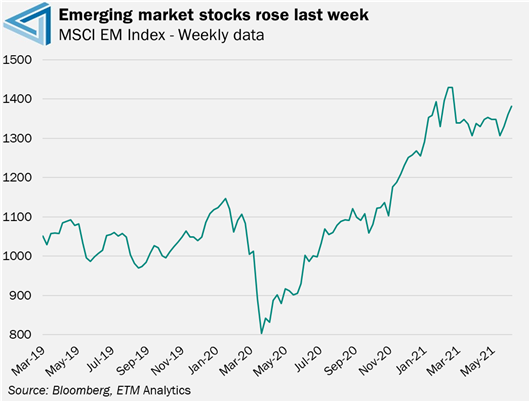