Angolan bonds consolidate despite expectations for a sharp drop in debt

US inflation: Ahead of the final FOMC rate decision for 2022, market focus will be centred on the US CPI report as traders look for more guidance on the path of interest rates. Consensus expectations suggest that headline inflation slowed further to 7.3% y/y in November from 7.7% y/y in October. Arguably of more importance for policymakers will be the core inflation reading. Policymakers will be hoping to see a meaningful deceleration in underlying inflation, which currently is buoyed at levels that is not consistent with inflation pulling back to target. Should inflation print in line or below expectations, it would bolster the notion that inflation in the US has peaked. Baring a massive upside surprise in the inflation data, we expect the FOMC to gear back on the pace of rate hikes and deliver a 50bps hike at its December meeting.

Commodities: Oil remains bid this morning following yesterday’s gains, taking the front-month Brent contract to near $79 per barrel from levels just north of $75 per barrel at the end of last week. Oil has found support from the further reopening of China’s economy as COVID restrictions are eased, while a leak at a key pipeline in the US has turned out to be worse than initially feared. China’s ambassador to the US has said that the nation will continue to relax its virus containment measures and will welcome more international travellers soon, providing a boost for the outlook for fuel demand in the world’s top importer.

Africa: A top priority of President Joe Biden’s US-Africa Leaders Summit, which aims to increase cooperation on some of the world’s most pressing issues, will be to map out the future of market access, according to Bloomberg. It is widely expected that the US will use the summit to claw back its lost influence in Africa by developing stronger trade ties while encouraging increased business levels between the US and Africa. The African Growth and Opportunity Act, which expires in 2025 and gives about three dozen African nations duty-free access to the world’s biggest economy for almost 7,000 products, will be discussed at the summit on Tuesday. Speaking on Monday, US Trade Representative Katherine Tai said, “We’ve consistently seen that there are opportunities for the program to be better — there could be much better uptake and utilization of the program.”

Egypt: As part of the Kingdom's support to Egypt, Saudi Arabia's sovereign wealth fund is reportedly in advanced talks to acquire Egypt's state-owned United Bank in a deal that could be worth $600mn. Reports quoting sources close to the matter indicate that the Public Investment Fund would carry out the acquisition through the Saudi Egyptian Investment Co. unit, which it set up earlier this year to invest in swathes of Egypt's economy. An agreement may be finalized as soon as this month, though final terms are still being agreed upon.

Kenya: Data from the Central Bank of Kenya showed that remittance inflows rose by 3.9% in November, coming in at $345.5mn from $332.6mn in October. The cumulative inflows for the 12 months to November totalled $4,021mn compared to $3,667mn in November 2021, an increase of 9.7%. The US remained the largest source of remittances into Kenya, accounting for 55.8% in November. The continued improvement in remittance inflows may help narrow the chronic account deficit and provide some of the much needed foreign exchange income to potentially ease pressure on the Kenyan shilling.

Tanzania: Headline inflation in Tanzania remained unchanged in November at 4.9% y/y. According to the inflation report, food and non-alcoholic inflation increased to 9.5% in November from 9.1% in the month prior. Meanwhile, inflation for all items without food and non-alcoholic beverages slowed to 3.1% from 3.3% in October. The unchanged reading keeps inflation at the highest level since October 2017 and will further buttress the Bank of Tanzania's resolve to continue reducing monetary policy accommodation.

Zimbabwe: Zimbabwe’s Reserve Bank Governor has said that the decision to stop paying inflated bills has helped to stabilize the local currency, contain inflation, and should be maintained. Treasury in August stopped payments to suppliers after noticing they were submitting invoices for goods and services using the parallel-market exchange rate for the Zimbabwean dollar, meaning they were charging the government significantly more than if they were using the official rate. The payment restriction is one of several introduced since May. Others include a new interbank rate, gold coins, legalizing the use of the US dollar, and a brief ban on bank lending to try and halt a decline in the value of the local currency.

Ethiopia: Headline inflation in Ethiopia accelerated to a 6-month high in November, coming in at 35.1% y/y from 31.7% y/y in October. This was the second straight month that consumer prices have risen and reflects the severe shortages and rising prices of basic commodities, especially food items. The worst drought in Decades in the horn of Africa has contributed to a surge in food prices and overall inflation. This has been compounded by lingering currency weakness.

Mozambique: Consumer price inflation in Mozambique decelerated to 11.25% y/y in November from 11.80% y/y in the month prior. The November reading was the slowest pace of price growth in the economy since June. On a m/m basis, prices rose 0.85% during the month. The continued slowdown in the inflation rate will further widen Mozambique’s positive real interest rate, which will, in turn, continue to support the currency. Mozambique has one of the highest real interest rates in the world at 6%.

The Ghanaian cedi remained the star performer in the Africa FX complex on Monday, with the currency extending its rally against the USD. Yesterday’s gains come off the back of the cedi’s more than 9% advance against the USD last week amid optimism that the country is moving closer to unlocking an International Monetary Fund program. This saw the cedi record the biggest weekly advance among the 150 currencies tracked by Bloomberg. 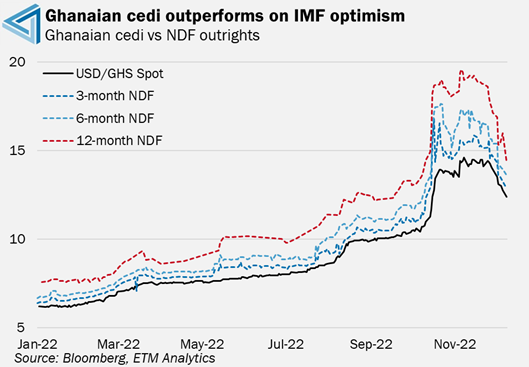 The recent cedi rally has seen traders in the derivatives market pare back their bets for depreciation in the months ahead. When looking at the 3-, 6- and 12-month non-deliverable forward outrights, they have trended lower in recent sessions. From a valuation point of view, the cedi is deeply undervalued on a real effective exchange rate basis. This suggests that there is room for the currency to appreciate in the coming months should Ghana’s macroeconomic backdrop improve meaningfully.

In the short-term, optimism around an IMF deal and decreased demand for dollars as some corporates wind down their operations ahead of the festive season should see the cedi bulls remain in control. It is worth pointing out that reports over the weekend citing sources close to the matter suggest the IMF and Ghana are expected to reach a staff-level agreement on a loan deal by Tuesday.

Notwithstanding the prudent 2023 budget plan delivered by the government on Friday, Angolan Eurobonds continued to consolidate on Monday, a sign that markets are trading extremely cautiously ahead of all the developed market central bank decisions this week. For context, Angola’s 2029 Eurobond continued to hover around the 9.90% mark for the fifth straight session. The consolidative bias has been a theme across most African Eurobonds in recent days, with no significant moves to report back on. 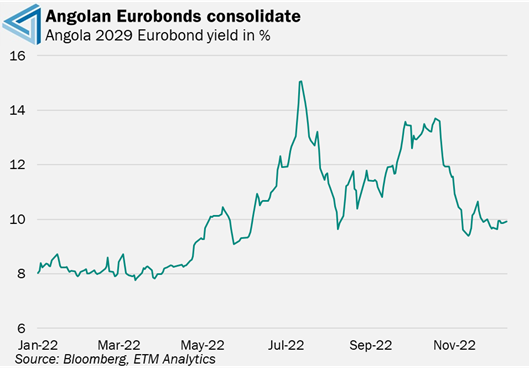 In its 2023 budget plan published on Friday, the Finance Ministry said that it expected debt to fall to 56.1% of GDP by the end of this year from 82.9% of GDP last year. This sharp drop in debt comes despite dwindling oil production, which was offset by sky-high international oil prices, resulting in windfall tax revenues this year. That said, the outlook for the revenue side of the equation has deteriorated, with oil prices coming under considerable selling pressure recently due to a worsening demand outlook and improved supply.

Looking at the year ahead, the Finance Ministry forecasts gross funding needs of AOA 7.2trn for 2023. The Ministry added that it plans to cover the funding needs by tapping the local and international debt markets while also raising funds from financial institutions and asset sales. Encouragingly, the Finance Ministry is forecasting a fiscal surplus of 0.9% of GDP. Moreover, the government plans to repay AOA 6.6trn worth of debt in 2023. From a financial market perspective, while the impetus this week will likely stem from the outcome of developed market central bank decisions, the positive fiscal developments will be supporting domestic sentiment.

Given its impact on inflation across Africa, it is worth having a look at the latest movements in global food prices. While global food prices, as reflected by the United Nation’s FAO Food and Agriculture World Food Price Index, remain buoyed well above pre-pandemic levels, it appears as if food prices have peaked. For context, the gauge has fallen by more than 15% from its peak in March amid an improvement in supply-side dynamics. Annual growth in food prices has plunged to 0.3%, which will provide some much-needed relief for policymakers.

In Africa, the high food prices this year have resulted in food insecurity and raised social tensions. Moreover, for food-importing nations, the high international food prices have weighed on trade dynamics and strained government budgets in countries that had to implement food subsidies to keep food prices contained. 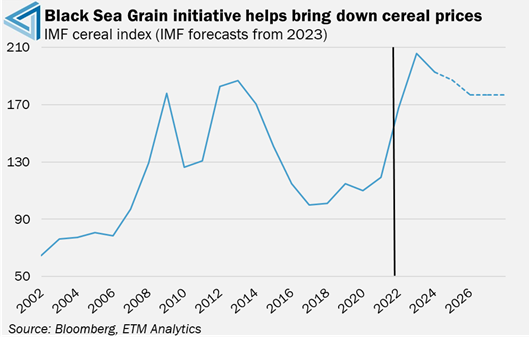 While it is encouraging that global food prices peaked, several factors could still keep prices elevated. Firstly, La Niña weather conditions are forecast to return for the third straight year, likely impacting crop yields. The Black Sea Grain Initiative, which provides safe export shipping from Ukraine, could cause another shock to cereal supplies if Russia suspends it again. And finally, according to IMF research, 45% of any change in fertilizer prices usually feeds directly into global cereal prices within four quarters. This suggests that some of the effects of high fertilizer prices may not have been fully reflected yet.

There are also some downside risks to the outlook for global food prices that will come into play in 2023. Higher interest rates discourage inventory holdings and reduce speculative activities in the commodity futures markets. Therefore, with expectations of lower rates in the coming year, we can expect some downward pressure on food prices.