Most of the focus at the moment is on economic data, but it is worth noting that President Biden will hold a virtual meeting with Chinese leader Xi Jinping, possibly as early as next week. In principle, the two agreed to hold a virtual meeting before the end of the year, and the underlying hope is that this dialogue starts to ease tensions between the two nations. Without direct relations between the two leaders, the risk is that the tensions escalate towards conflict between the two superpowers, something no one wants.

Ahead of the US inflation data later today, the USD appears to have stabilised. The risk is that inflation surprises to the topside and prompts speculation that the Fed may bring forward any timing of a rate hike. Following on from the sharp jump in producer prices in China to a 26 year high, and inflation is a definite concern for investors. It will likely detract from household disposable income and will be growth negative. Equity markets have come under pressure, and overall risk aversion levels are a little higher this morning. EM currencies are on the defensive, and the USD will likely hold its station until the data is released.

Ethiopia: Data from the Ethiopia Tea and Coffee Authority suggests that a deteriorating political crisis in the country has not disrupted coffee exports, and growers are expecting another record year as foreign rivals struggle. Ethiopia exported 86,000 tons of coffee during the three months through October, generating $327.9mn, 77% more than projected. According to official figures, the country exported 250,000 tons during the marketing year that ended July 31, earning a record $910mn. Ethiopian coffee exports are forecast to reach 280,000 tons in the current fiscal year and generate $1.1bn, which will significantly boost government coffers.

Copper: Copper prices are steady this morning in the Asian session, with the benchmark 3m LME contract trading around $9535.00/tonne as we head into the EU open. The copper desks are in limbo, preferring the comfort of the fence ahead of the all-important US CPI reading later today.   The Trafigura group, the world’s largest copper trader is predicting a period of softness for the red metal which will potentially provide some relief for the market which has seen a squeeze in available near term supplies. Bloomberg reported - Trafigura’s chief economist Saad Rahim made the comments on a call with investment bank Jefferies, according to an analyst.

Kenya: The Kenya Revenue Authority (KRA) has hiked excise duties on drinks. Specifically, the KRA implemented a 4.97% inflation adjustment excise tax on fruit juices, bottled water, and alcoholic drinks. According to a KRA notice, the hike took effect on November 2. An increase in exercise duties in addition to a weakening local currency and rising costs of food items is likely to drive up inflationary pressures in the coming months.

Morocco: After Algeria cut off piped supplies, Morocco is exploring the international market for liquefied natural gas. Given the simmering tensions between the two countries, Energy, Transition and Sustainable Development Minister Leila Benali said that authorities in Rabat are “working to develop our port infrastructure” to accommodate imports of LNG. Benali added that the government plans to quickly develop the infrastructure that would enable it to purchase cargoes of liquid fuel from the international market and turn them back into gas for consumption. Note that Morocco relied on the Algerian pipeline for about 1bn cubic meters of natural gas that mostly fed two power plants, which have been idled since flows stopped. The kingdom’s electricity and petroleum agencies have said the impact on its power grid will be “insignificant.”

Uganda: As new plantings begin to produce, the Uganda Coffee Development Authority forecasts output to increase as much as 22% in the 2021-2022 season, a fresh record. Africa’s largest coffee exporter is forecasting production of a record 10.5mn bags to 11mn bags in the period through September. That would be more than half the government’s production target of 20mn 60-kilogram bags by 2030. According to an official from the UCDA, “production is increasing due to sustained planting and rehabilitation of old trees.” Note coffee shipments from African countries are set to climb as production increases, and global rivals, including Brazil and Vietnam, face difficulty in exporting amid shipping disruptions.

Botswana: Earlier this week, we had the President deliver his State of the Nation Address virtually and not surprisingly much of it centred around the COVID-19 pandemic and the economy, which was a series of pronunciations on the various facts and figures. The President has been in the firing line of his opponents, with many of them calling for him to step down over the weekend. What has exacerbated the unhappiness is the devastation brought by the COVID-19 pandemic and the government’s handling of the situation. Many are saying the government failed in its vaccination drive. The President acknowledged that it has been slow and implemented restrictions that were too severe, causing much economic hardship. The fact of the matter is that many governments across the world have seen a severe decline in their support base over the pandemic and we would not be surprised to see a similar narrative develop in Botswana.

Although the Mozambiquan Metical is faced with a number of challenges, one key factor that has supported its resilience this year has been its high positive real rate. Mozambique has one of the most competitive real rates globally, despite the continued acceleration in inflation. Specifically, headline inflation in Mozambique accelerated further in October, coming in at 6.42% y/y from 6.04% y/y in the month prior. This is the fastest pace of price growth in the economy since November 2017 and marked the third straight month consumer price have risen.  On a month-on-month basis, prices climbed 0.89% from 0.73% in September. 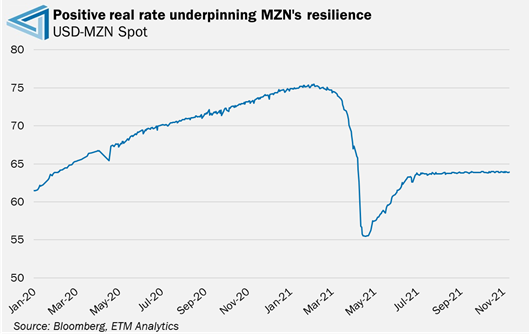 While inflation rose for a third straight month, policymakers in Mozambique expect it to remain at a single digit in the short to medium term despite forecasts for rising food and oil prices in the international market. It is worth noting that Mozambique increased fuel prices last month, which will likely add to price pressures in the coming months.

Although inflation in Mozambique accelerated further and upside risks exist in the coming months, the real rate (Policy rate – CPI) currently stands at 6.83% and is one of the best in the region due to the Bank of Mozambique's prudent monetary policy stance. This has in part supported the MZN, which is Africa's second-best performing currency on a year-to-date basis against the dollar up by +16.78%. Only the Zambian Kwacha (+21.27%) has fared better in Bloomberg's basket of 20 African countries against the USD.

Fixed Income: Angola shows that it is committed to returning to a path of sustainable debt

While Angola has been a point of concern for investors in recent years, the country has proven over the past year that it is indeed committed to returning to a sustainable debt path. Despite the headwinds stemming from the COVID-19 pandemic, the government has pushed ahead with growth-enhancing and debt consolidating reforms, both of which have significantly boosted investor sentiment towards Angola. In addition, international oil prices have surged this year, providing a significant boost to the heavily oil-dependent country.

Note that while buoyant oil prices have provided a much-needed boost to government revenue and hard currency inflows into the country, Angola’s oil production has declined markedly in recent years on the back of maturing oil fields and the lack of reinvestment into the sector. Although Angloa’s oil production has declined, the government is pushing ahead with reforms to diversify the economy and develop other sectors of the economy in order to stimulate and create more sustainable growth.

In its recently presented budget, which awaits final approval in December, the Finance Ministry said it aims to improve fiscal fundamentals, strengthen macroeconomic stability and rein in debt to support public investment and employment generation. The Ministry aims to run a primary surplus of 5.5% of GDP in 2022 to reduce the public debt ratio. Specifically, Angola’s debt to GDP ratio is forecast to fall to 82.1% by the end of the year from 128.7% in 2020 and 84.4% in September. 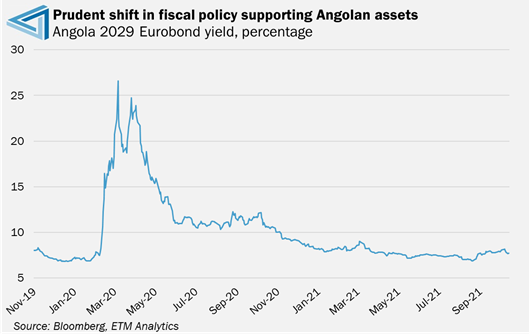 The drastic improvement in Angola’s fiscal metrics has provided a boost to domestic assets with bond bonds and the Angolan Kwanza performing relatively well this year. Notwithstanding the tightening in global monetary conditions and soaring international commodity prices, which has weighed on bonds across the globe, Angola’s 2029 Eurobond yield has shed more than 90bps this year to close Tuesday’s session at 7.71%. Note that Angolan Eurobond yields are trading well below the comparable Eurobond yields of similarly rated Ethiopia and Mozambique. Going forward, if the government continues with its prudent policy and oil prices remain elevated, we expect the outperformance of Angolan Eurobonds to persist.

While the rest of the world is moving away from fossil fuels, East Africa nations continue to push ahead with massive oil and gas projects as they seek to exploit their recently discovered wealth of reserves. In recent years, there has been a wave of investment into gas and oil projects in Mozambique, Tanzania, Kenya, and Uganda. Note that the investments have been some of the largest ever in Africa.

Kenya was in the spotlight yesterday with the CEO of National Oil Corp of Kenya Leparan ole Morintat announcing that the country plans to raise $1bn to buy a stake in an oil project operated by Tullow Oil Plc and its partners. The fundraising is likely to happen next year as Tullow, Africa Oil Corp. and TotalEnergies SE have until December to submit a plan to develop the resource before their production sharing agreement with the government expires.

The $3.4bn project is expected to be a game-changer for Kenya that is a net fuel importer. Once complete, the project will include a pipeline to the coast for exports and an estimated output of 120,000 barrels a day, with an expected gross oil recovery of 585mn barrels over the full life of the field. Going forward, we expect that it will become increasingly more challenging for East African nations to raise funds for oil and gas projects, especially after the COP26 agreement was signed.