The month of August will be a significant one for the political landscape of Sub-Saharan Africa as Angola and Kenya head to the polls. While no date has been set in Angola, we do not anticipate it will delay them outside of the five-year election cycle, which concludes in December. Meanwhile, the Presidential vote in Kenya will take place on August 9. Given the series of military takeovers witnessed in 2021 in Sub-Saharan Africa, the results of these elections will significantly impact prospects for reversing democratic erosion, the extent to which civil society and countervailing institutions can keep leaders accountable. Moreover, the outcomes could significantly impact the economic policy trajectories going forward, and we, therefore, expect to see some level of volatility in the financial markets as the elections draw closer.

The People's Movement for the Liberation of Angola (MPLA), which has ruled for 46 years, has confirmed that incumbent president Jao Lourenco will again be the party's candidate in the presidential elections. Lourenco has been in power since 2017, and his MPLA party will confront a newly formed opposition coalition known as the United Patriotic Front (UPF), led by Adalberto Costa Junior of the National Union for Total Independence of Angola (UNITA). Last year, Angola's three main opposition parties formed a coalition to field a single presidential candidate in the hope of unseating the long-ruling MPLA party. The UPF is aiming to translate popular grievances into electoral gains. Note that it was only last year that Angola official emerged from an economic recession that it had been mired in since 2016. The recession had placed pressure on living standards and youth employment in the country and was exacerbated by the emergence of the coronavirus pandemic. 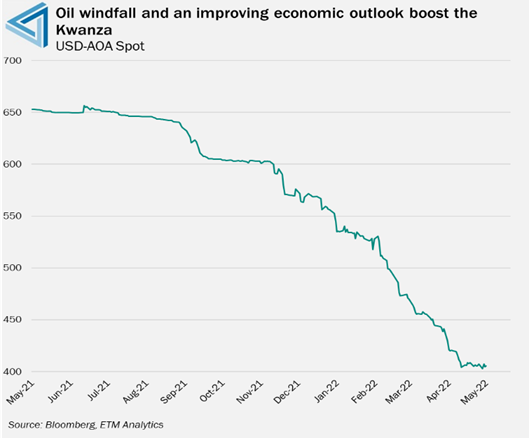 What are Angola’s opinion polls saying?

In the latest opinion poll ahead of Angola’s election, the ruling party's lead over the main opposition has narrowed to 7 percentage points. A poll conducted by Afrobarometer involving 1200 respondents surveyed from February 9 to March 8 showed that the Popular Movement for the Liberation of Angola, or MPLA, which has held power for 47 years, had 29% support, while 22% said they would back the National Union for the Total Independence of Angola or Unita. According to Afrobarometer, almost 50% declined to express a preference, making it impossible to predict the election outcome. 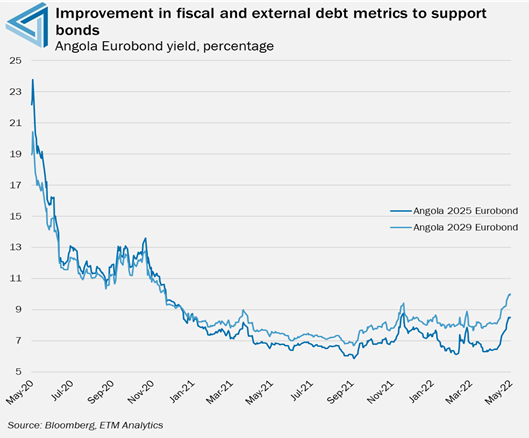 From an economic perspective, a win for the ruling party is likely to be a more favourable outcome as it will likely ensure policy continuity. When President Lourenco assumed power in 2017, he pledged to diversify the economy away from oil, increase foreign and domestic demand, champion private sector development, and address deep-seated corruption. Lourenco has since made sweeping legal reforms to wean Angola off the diminishing yields of its oil industry, and the country has eased restrictions on foreign and domestic investment in strategic sectors such as mining and telecoms, while the anti-corruption drive has yielded some fruit. It is worth noting that some of these reforms will take years and are still ongoing.

S&P, in its upgrade of Angola's sovereign credit rating status, emphasized the importance of reforms in its decision. The Angolan government was very committed to the reform program that they had with the International Monetary Fund. According to S&P, the government implemented difficult reforms, and the immediate impact was challenging, with inflation rising to double digits and poverty increasing, but on the budget side, the government was committed to reducing spending and increasing the tax base. The oil windfall and economic reforms leading to an improvement in fiscal and external debt metrics have supported Angolan assets. For context, the Angolan currency is currently the best performing African currency on a year-to-date basis. Meanwhile, the improved fiscal backdrop saw Angola successfully issue $1.75bn worth of 10-year Eurobonds.

However, election years are always difficult in terms of reformist measures and maintaining a balance in public accounts. Given the IMF program is over and it served as a political anchor, it remains to be seen whether the government will remain committed to reforms. Moreover, elections could encourage populist measures, and we could see the government spend more to appease the population, especially in the face of a united opposition.

Historically, elections in Kenya have been characterized by violence. Candidates and their allies have used tribal politics to turn people against one another. Kenyans are set to vote for their new President on Tuesday, 9 August. Allegations of election fraud are likely, and the risk of damaging post-election disputes and violence could once again cast a shadow over Kenya. It remains to be seen if Kenya has learnt any lessons from the past and finds itself in a better position to achieve a peaceful and smooth transfer of power.

While a record 46 independent presidential candidates are set to join the race for the president, the election looks set to boil down to Deputy President William Ruto and Raila Odinga. The former is running on a United Democratic Alliance (UDA) party ticket, while the latter is the Orange Democratic Movement party leader. President Uhuru Kenyatta, who will leave the office at the end of the constitutional two terms, has endorsed his former archrival for the country’s top job after their parties joined forces. This brings together two of Kenya’s top political dynasties, who have a long history of opposing each other at the ballot box.

Odinga and Ruto have both pledged support for the marginalized communities if they become president, using policies that will increase government spending to drive economic growth. Odinga has proposed a rural development policy and a monthly stipend of KES 6,000 ($53) for about 2 million of the poorest families, while Ruto has suggested a fund of at least KES 100bn to support small businesses. Odinga has also presented a plan largely centred on social protection measures, including money transfers and universal healthcare. He also aims to fight corruption and manage public debt.

What are Kenya’s opinion polls saying?

In the latest opinion poll conducted by Nairobi-based pollster Tifa Research involving 1719 respondents, opposition leader Raila Odinga who is running for president for the fifth time has drawn ahead of rival candidate and Deputy President William Ruto. 39% of the voters back Odinga, compared with 35% for Ruto. Around 14% of respondents have yet to decide on their choice, and another 9% are unwilling to say who their preferred candidate is. The latest polls results marked a notable change after the April survey showed that Ruto the was the favourite to win the election with 39% support, compared with 32% for Odinga. The most recent poll was conducted after Odinga and Ruto in recent days named Martha Karua and Rigathi Gachagua as their running mates respectively. Marth Karua could become the first woman in Kenya’s history to occupy the office of deputy president. 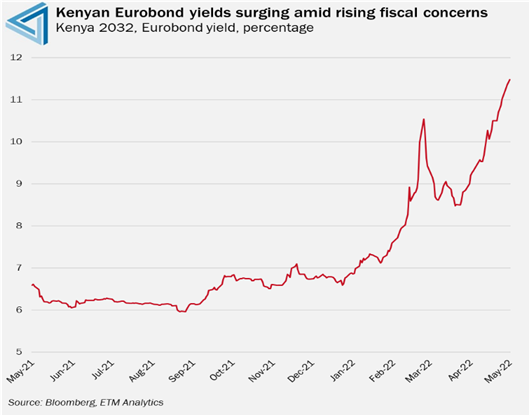 Election-related uncertainty is inevitable given how difficult the election is to call and will heighten as August draws closer, leading to slow business activity and wavering business confidence, including possible delays to projects and investment. If disputes and social unrest do not mar the election, the effect on the economy will likely be temporary. However, disruption similar to that surrounding the previous election in 2012 would be much more damaging. Ultimately, whoever wins the race to succeed, President Kenyatta will have to contend with a growing debt burden exacerbated by the coronavirus pandemic and may have to deal with the aftermath of a potentially divisive election. Recall that while President Kenyatta's infrastructure spending has bolstered the country's economy, it has come at a high cost to its fiscus. Key fiscal metrics such as debt to GDP and debt servicing costs to GDP have risen sharply under the Kenyatta administration, to the point where credit rating agencies and international lenders, including the  International Monetary Fund, have warned that Kenya faces a high risk of debt distress.

Nigeria gears up for 2023 Federal and State elections

While the focus will be on political developments in Angola and Kenya, it is worth noting that election fever is fast gripping Nigeria, with political parties needing to elect their presidential candidates by June 3 this year. However, the presidential elections will only occur in 2023 and will come against a backdrop of complex economic, political, and security challenges. Most attention will be on the ruling party candidate, the All Progressives Congress (APC), and the prominent opposition People's Democratic Party (PDP), given their dominance in the political space. Given the high stakes, developments ahead of the elections next year should be closely monitored as they could potentially generate some volatility.

With Nigeria’s primary elections fast approaching, increased political spending has weighed on the Nigerian Naira. Politicians are purchasing dollars to fund vote hunting in the primary elections at the start of the weekend, driving the Naira to fresh lows in the parallel market. Some contestants reportedly campaign by gifting dollars to delegates as an incentive to vote. Yesterday, the Naira in the parallel market plunged, to NGN 603 per dollar, its weakest this year. Meanwhile, the Naira in the official market, where supplies are low, ended Wednesday at just below NGN 416. That represents a premium of around 45%. Aside from political developments, dollar rationing by the Central Bank of Nigeria (CBN), low foreign exchange inflows, increased speculation and falling external reserves are some of the factors that have driven the plunge in the parallel market. Note, as of May 16, Nigeria’s foreign reserves stood at $38.91bn. The last time reserves fell below $39bn in August 2021. Nigeria has been unable to boost its dollar supply despite higher normal oil prices as the country is unable to fulfill its OPEC+ quotas due to crude theft and diversion of oil revenues to subsidize gasoline prices for its population. 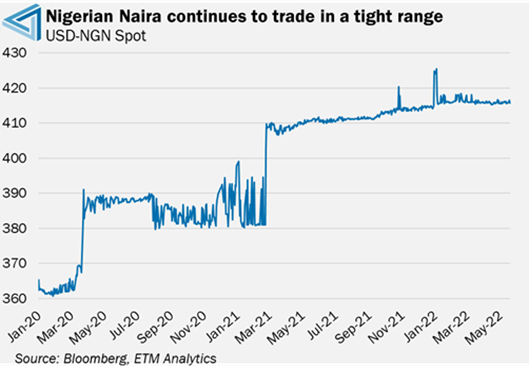 Continued weakness in the parallel market could force the Central Bank of Nigeria to once again devalue the currency. Since 2020 the CBN has done so in a bid to narrow the spread between the official and parallel market rates. Note our in-house models suggest that the Naira is overvalued by over 8% on a real effective exchange rate basis, suggesting room for depreciation exists.

Bottom Line: The high-stakes elections in Angola and Kenya are likely to have a significant impact on the political and economic trajectory of the respective countries. Moreover, given the spate of military takeovers last year, the elections will provide another litmus test of democracy in the Sub-Sharan Africa continent. Elections have proven to be a fundamental contribution to democratic governance. Despite the aim of allowing a peaceful transfer of power, African elections are often characterised by violence and unrest. We, therefore, see risks of financial market volatility in the build-up to August and potentially afterwards.