The IMF Board approved the fifth review of Angola's programme yesterday. This allows for an immediate disbursement of US$772mn and brings total disbursements under the three-year Extended Fund Facility (EFF) to US$3.9bn (out of a total programme size of US$4.5bn – 434% of quota – after the original amount was augmented at the third review last September).

Approval of the review was widely anticipated (see our IMF Spring Meetings notes). It leaves one final review, by end-December, when the programme is due to expire. It is too early to discuss what happens then.

The IMF statement noted the "authorities’ strong commitment to sound policies" under the arrangement, which has enabled Angola to mitigate the worst effects of the pandemic, while the ongoing fiscal adjustment, aided by higher oil prices, is reinforcing debt sustainability. The authorities achieved a strong fiscal adjustment in 2020 and are on track to do the same in 2021. The statement noted that the authorities plan to save the bulk of the oil revenue windfall this year, which will help sustain the planned rapid reduction in public debt vulnerabilities. The authorities have also tilted their monetary policy stance towards tightening, given persistently high inflation (inflation was 24.8% yoy in April).

Despite the obviously satisfactory performance, the review was approved subject to a waiver for the non-observance of one of the continuous performance criterion (non-accumulation of external arrears) and with modification to some performance criteria, indicative targets, and structural benchmarks. However, we think this is a minor complaint (although we await publication of the board paper for more detail).

But although widely anticipated, it will no doubt still come as a relief to investors that the review has been approved and shows that Angola continues to move in the right direction. Debt sustainability remains on a knife-edge although IMF support, together with higher oil prices, Chinese debt forgiveness and a looming SDR allocation (which we think is worth about US$1bn), should all help to mitigate payment risks (on the bonds) in the near term. Net international reserves remain low, at US$8.0bn as of 7 June (US$14.1bn on a gross basis), having fallen by 9% this year.

In addition, the IMF noted the authorities' decision – as reported in the media too – to request debt service relief under the extended Debt Service Suspension Initiative (DSSI) through end-December 2021, as we anticipated the authorities would do in April. Recall, DSSI was extended again at the time of the Spring Meetings through the second half of 2021, after being extended through the first half at the time of the Annual Meetings last October. Angola had already participated in the original DSSI and the first extension, so it should be no surprise it sought to take advantage of the second (and final) extension. We calculate the further extension might lead to additional cash flow savings of up to US$1.1bn from official bilateral creditors, based on World Bank figures, after savings of US$1.3bn in H1 2021 and US$1.7bn in the 2020 suspension period. The government, according to media reports, repeated its intention not to touch the bonds. 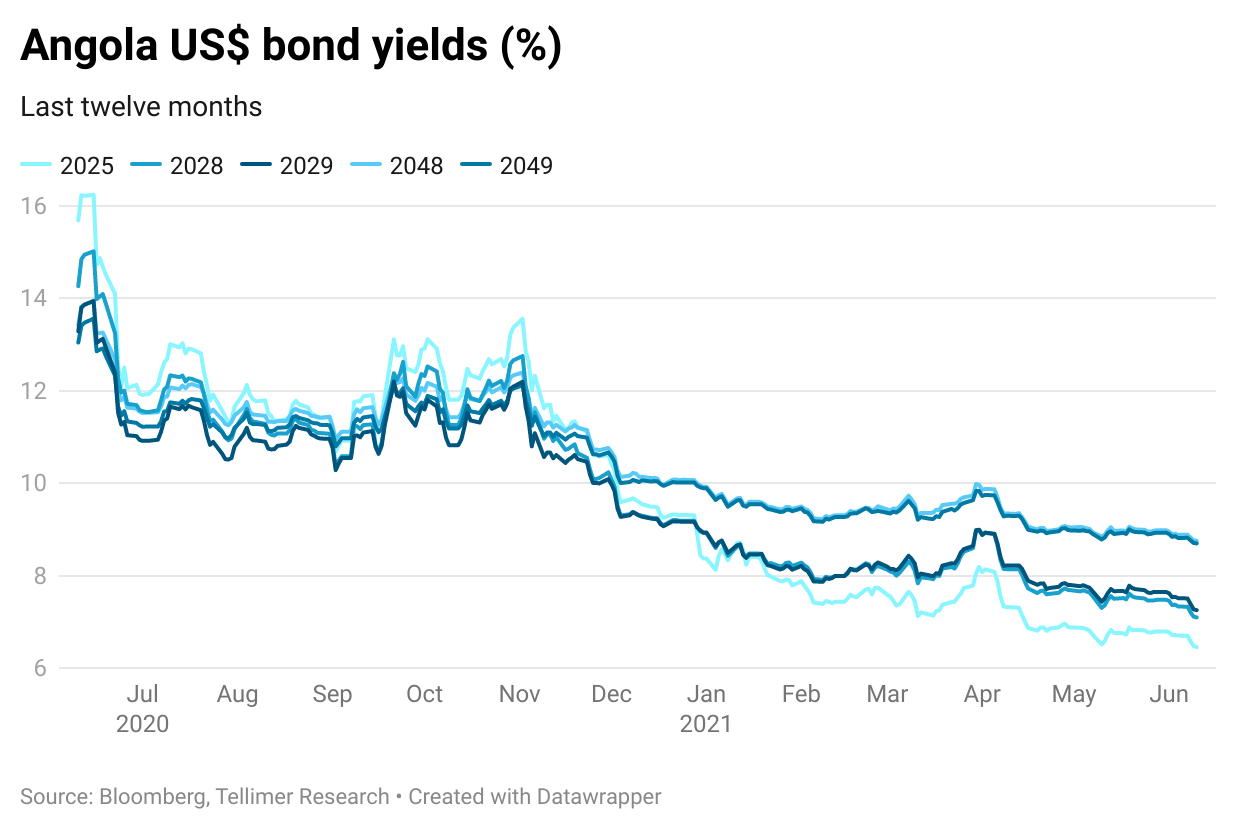