Angola's Constitutional Court yesterday rejected the opposition's request to annul the results of last month's general election. The legal challenge, which was brought by the main opposition party UNITA (and another minor party) last week, alleged voting irregularities following its defeat in the election on 24 August.

The court's decision upholds the official results released by the National Electoral Commission on 29 August. This gave victory to the incumbent MPLA party and therefore secured the position of its leader, Joao Lourenco, as president for a new five-year term. According to media reports, the court's decision cannot be appealed. President Lourenco will be sworn in again later this month.

The MPLA won last month's election, as largely expected, albeit in a more tightly contested race and in the face of low turnout (just 45% of the electorate). The MPLA gained 51.17% of the vote while UNITA came second on 43.95%, according to the official results, which translated into a lead of only 453,000 votes.

Moreover, MPLA's share was well down on its 61% in the 2017 elections, while UNITA's was well up on its 27% share. The remaining six other parties achieved less than 5% combined. 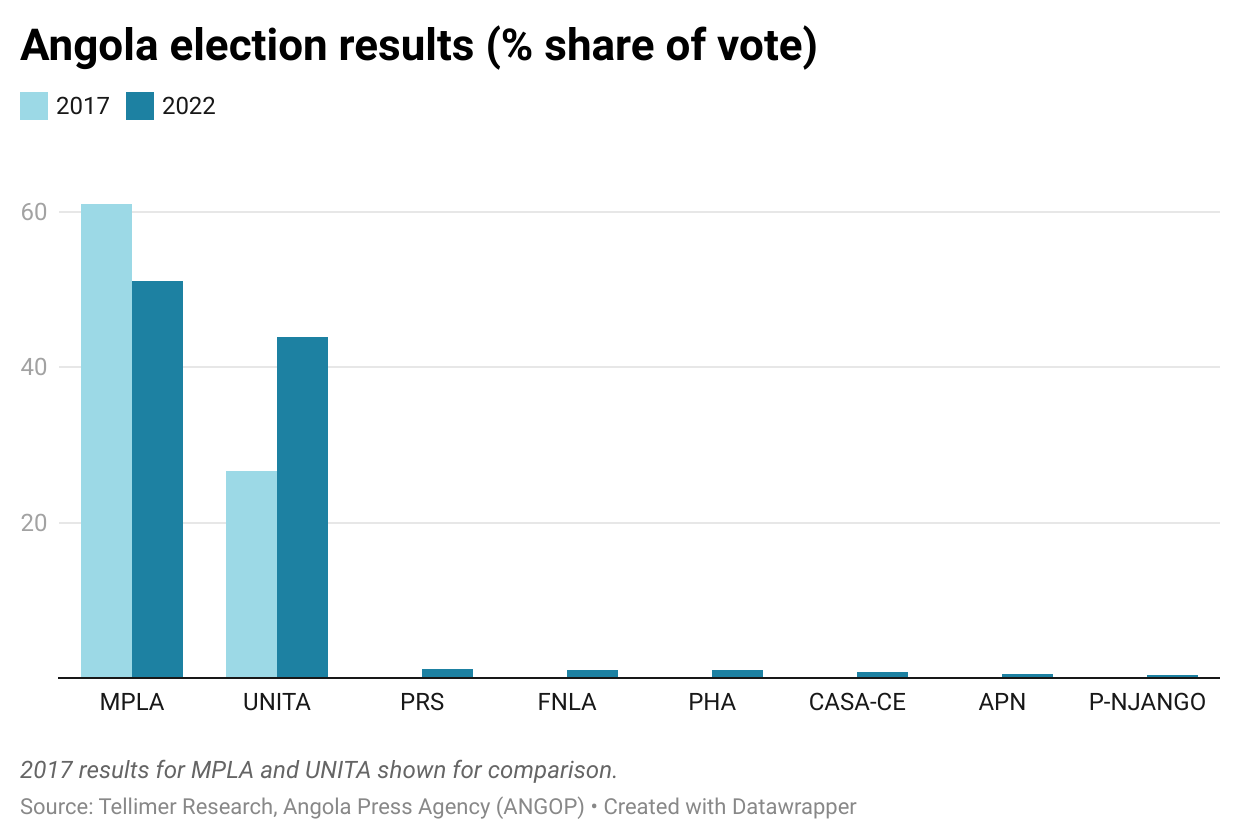 UNITA, however, claimed it had achieved 49.5% of the vote, based on its own polling station records, while the MPLA got 48.2% (a discrepancy, it says, of over 500,000 votes). However, the court ruled that UNITA's complaint did not meet the requirements to void the results.

With the result, the MPLA, while winning, finds itself with a reduced majority, securing 124 parliamentary seats in the 220-seat parliament (losing 26 seats compared with the 2017 election). Indeed, it is the first time that the MPLA will not hold a two-thirds majority, a threshold that confers certain benefits (such as being able to amend the constitution). Meanwhile, UNITA won 90 seats, up from 51 last time. Three other minor parties (PRS, FNLA, and PHA) received two seats each. CASA-CE, APN and P-NJANGO did not secure any seats.

In addition, the MPLA lost the capital Luanda to UNITA. Seen as a traditional MPLA heartland, this will be another blow to the ruling party and sends a clear signal of change.

Parliament's new composition, therefore, puts the dominant MPLA under more scrutiny by the opposition and, for the first time, parliament may be more balanced and representative. Whether this tests governance and governability, enhancing the quality of policymaking, or detracting from it, remains to be seen.

Despite the court's ruling, this may not be the end. What will matter now is what UNITA (and its supporters) do next. Will its leader Adalberto Costa Junior accept the ruling (which could be a bitter pill to swallow, notwithstanding his party's strong performance) or continue to contest the results? It is not clear to us if there are any other legal or constitutional avenues open to UNITA (even with, reportedly, four of the 16 electoral commissioners not signing off on the final result), while mobilising protests risks inflaming tensions. And, if UNITA accepts the results, how will it act as a much more credible opposition?

Indeed, Bloomberg this morning suggested Costa Junior's position was hardening, reporting that he said "No one should rob us of the victory" and reserved the right to appeal to international courts. Uncertainty may, therefore, be set to continue, potentially escalating tensions. Leaders, on both sides, will have to behave responsibly.

The reaction of the international community will also be important. International recognition of the official result by the US and EU, which we expect to be forthcoming, would further reduce the options for UNITA.

Conversely, if the result is accepted, the outlook will then depend on how President Joao Lourenco responds to what might be seen as a humiliating blow to the MPLA's traditional dominance. Is he able to learn the lessons from his party's electoral losses and reach out to the disaffected and disillusioned, and show how the macroeconomic gains lauded by bondholders can trickle down to the people, or will the MPLA, not used to responding to voters' wishes, carry on regardless – risking defeat in the next election in 2027?

Moreover, Joao Lourenco may suffer from a weak mandate given the low voter turnout (less than half the electorate voted, and the results mean that only around one-fifth (22%) of the electorate voted for the MPLA). Low turnout may reflect the MPLA's traditional dominance. Can he arrest the decline in voter apathy? Does he want to?

We retain our Buy on Angola's dollar bonds, with a yield of 11.8% (price US$82.8) on the 8.75% 2032s on a mid-price basis as of cob 2 September (markets were closed yesterday due to the US holiday, although prices are indicated slightly higher +0.15pts this morning). The bonds rose 20pts (from US$70 to US$90) in the summer rally – with the yield on the '32s touching a low of 10.4% from a high of 15% – but have weakened a bit since then, reflecting external conditions as well as domestic political uncertainty.

An easing in political uncertainty – if UNITA accepts the election results – and still elevated oil prices should help support the bonds in the near term. Moreover, with the election over, any signs that the government will look to re-engage with the IMF over a successor programme to the one that expired last December would also support the bonds. This would not only help to secure new financing but crucially to reinforce policy discipline and structural reform momentum. 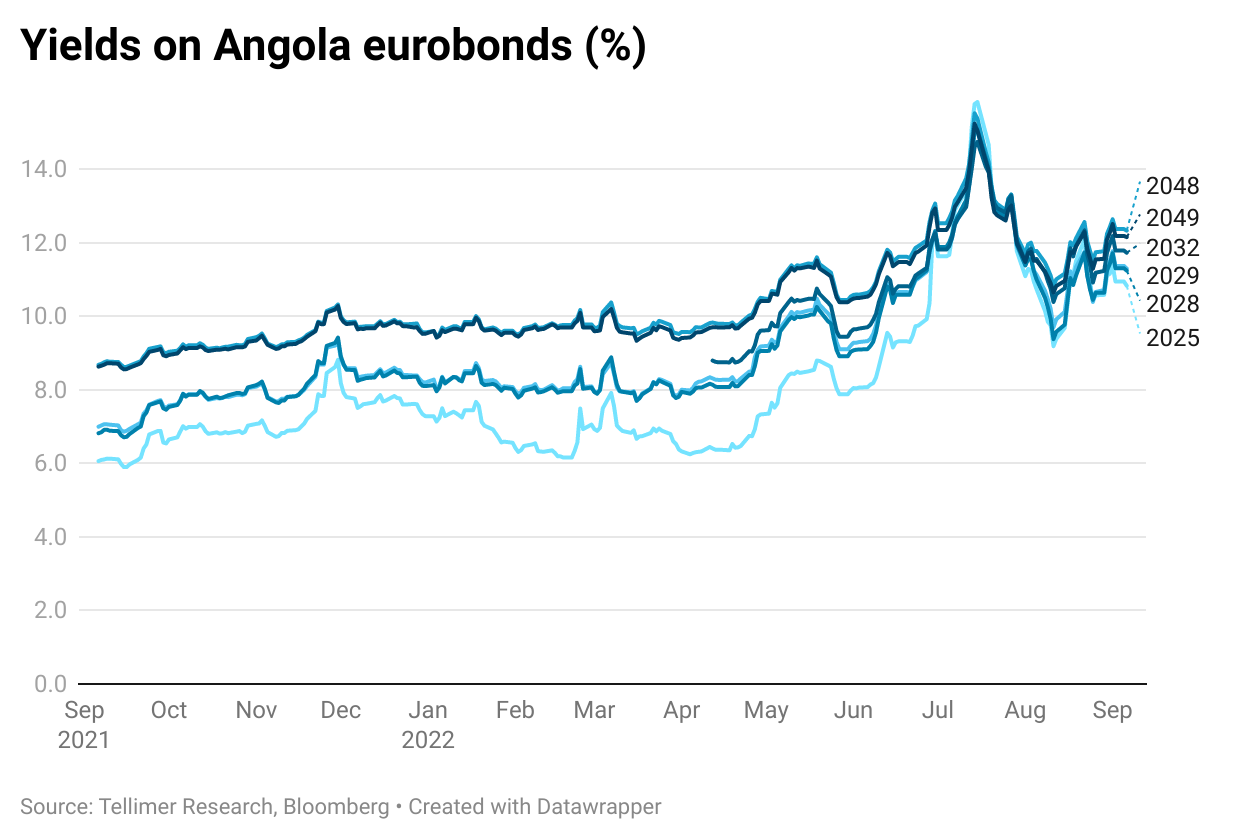