An obscure treaty threatens climate goals, but fixing it may hurt EM investment

I spent much of my early career researching and then advising governments on how oil producing countries could best take advantage of their resource wealth for economic development by getting the right terms for foreign investment and building the right technology linkages from that foreign investment, first to bring new capability into the country and then to ensure that new capability would be available to domestic firms as well as foreign investors. A key to making happen this was reducing perceived political risk so that investors could accept the additional constraint of local content requirements.

Fortunately, at least for me at the time, the 1994 Energy Charter Treaty (ECT) was agreed between the developed countries of Western Europe, Japan and Australia and the former Soviet states and a number of other developing countries to bolster the rule of law in international energy investments. The ECT provided a supranational dispute resolution mechanism for energy-related foreign direct investment, reducing the political risk of oil companies from developed countries investing in projects in the former Soviet Union.

Since then, membership of the treaty has grown, with several Middle Eastern countries having joined and others in Africa and South Asia in the process of acceding to the treaty. Although Russia stopped the process of ratifying the ECT in 2009, several other signatories have not completed ratification and Italy withdrew from the ECT in 2016, the treaty is still going strong. Indeed, Italy will remain subject to the ECT until 2036 under the Treaty’s 20-year sunset clause, which was designed to prevent countries from signing the ECT, locking in long-term energy capital investments and then changing the rules on the investors.

Figure 1: The geographic scope of the Energy Charter Treaty is growing dramatically 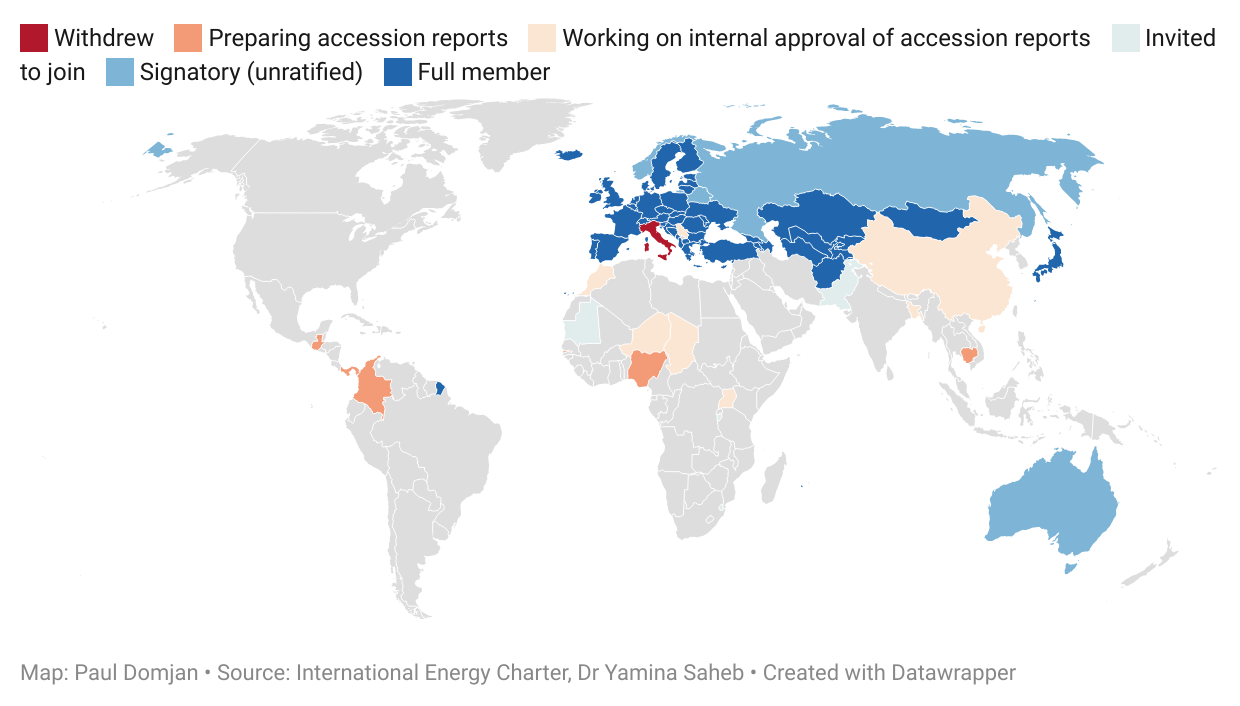 Although the ECT was always designed to support oil and gas investment, you would not know it from looking at the disputes that have actually been brought under the Treaty. Indeed, a report by a former ECT Secretariat staff member shows that more than half of claims under the ECT are related to solar projects, with the largest single defendant being the Spanish government over changes to solar generation incentives: 48 of 130 known claims under the treaty are against Spain.

Figure 2: The most frequent use of the Energy Charter Treaty has been to dispute solar tariffs 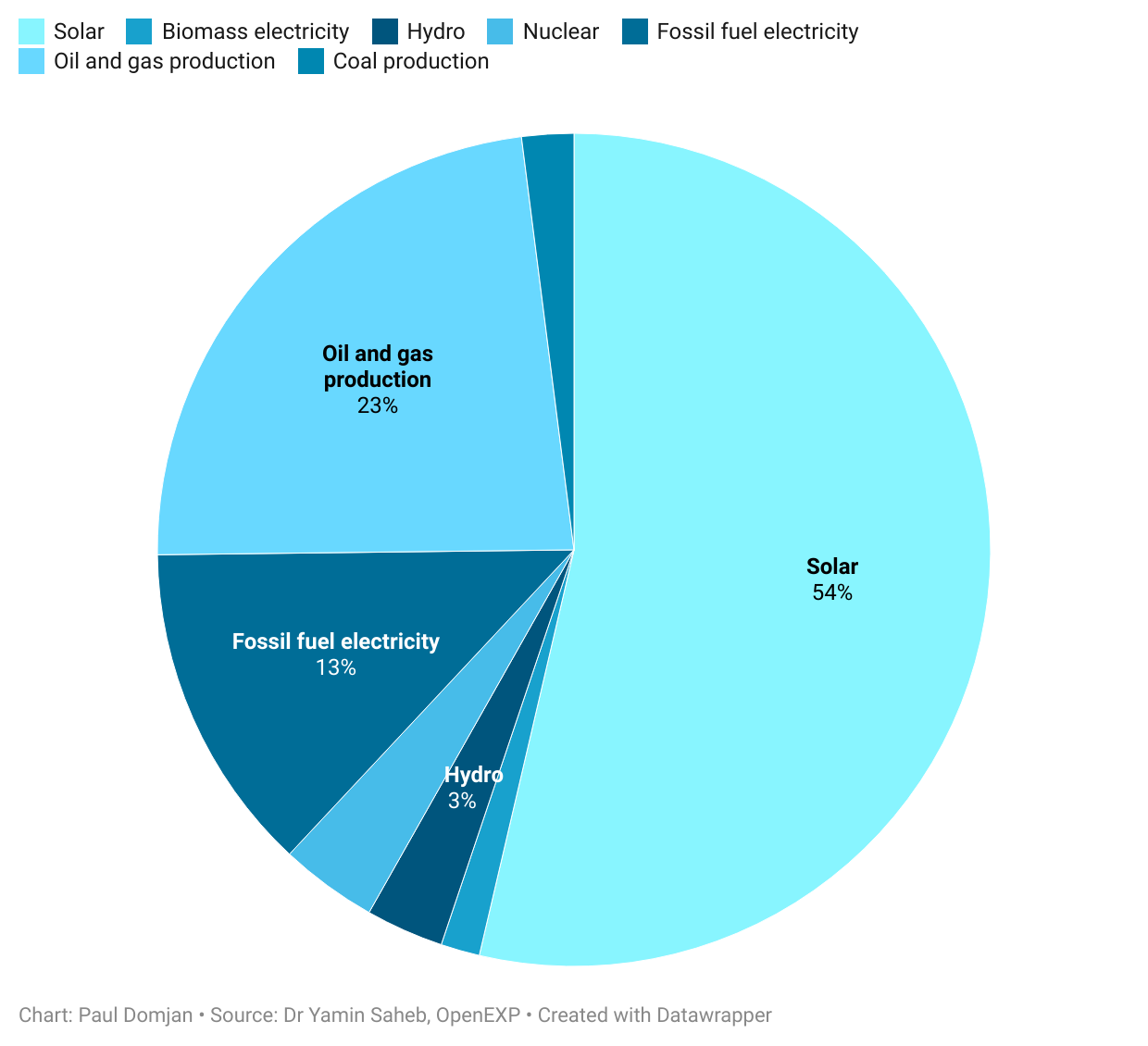 In 2013, after significantly accelerating its build-out of solar, Spain reduced its very generous feed-in tariffs, lowering the rate of return for initial solar investors. While Spanish investors could not bring claims under the ECT, at least 48 claims were brought by foreign investors, the majority of whom were from other European countries.

The 37 claims whose amounts are known today total more than EUR8bn. Of 15 cases that have been resolved, investors have won 12, the Spanish state has won two and one was withdrawn. As such, the Spanish government has now offered foreign investors the incentive of a guaranteed rate of return of 7.398% for 2020-31, versus a planned 4.7% for 2020-25 with no subsequent guarantees, if they forgo ECT claims and the enforcement of any arbitration awards under the ECT. This may be an expedient measure to remove the ECT risk, but it raises questions of discriminatory practice if domestic investors, and perhaps foreign investors not from ECT countries, are unable to benefit from the same terms.

The situation in Spain highlights two serious problems that the ECT poses for climate policy:

The potential impact of the ECT on climate policy is surprisingly large. The IEA’s Sustainable Development Scenario would see total global CO2 emissions of c1,153 gigatons during the period 1998-2050, and the more aggressive Net Zero 2050 Scenario would require only c918 gigatons. To put the impact of the ECT in perspective, it protects 216 gigatons of those emissions. Under the Sustainable Development Scenario, the emissions of ECT member countries themselves would be limited to only 199 gigatons of CO2 during the period, less than the sum of emissions protected by the ECT.

Figure 3: The majority of ECT member states’ allowable emissions under the IEA's Sustainable Development Scenario are already locked in by the treaty 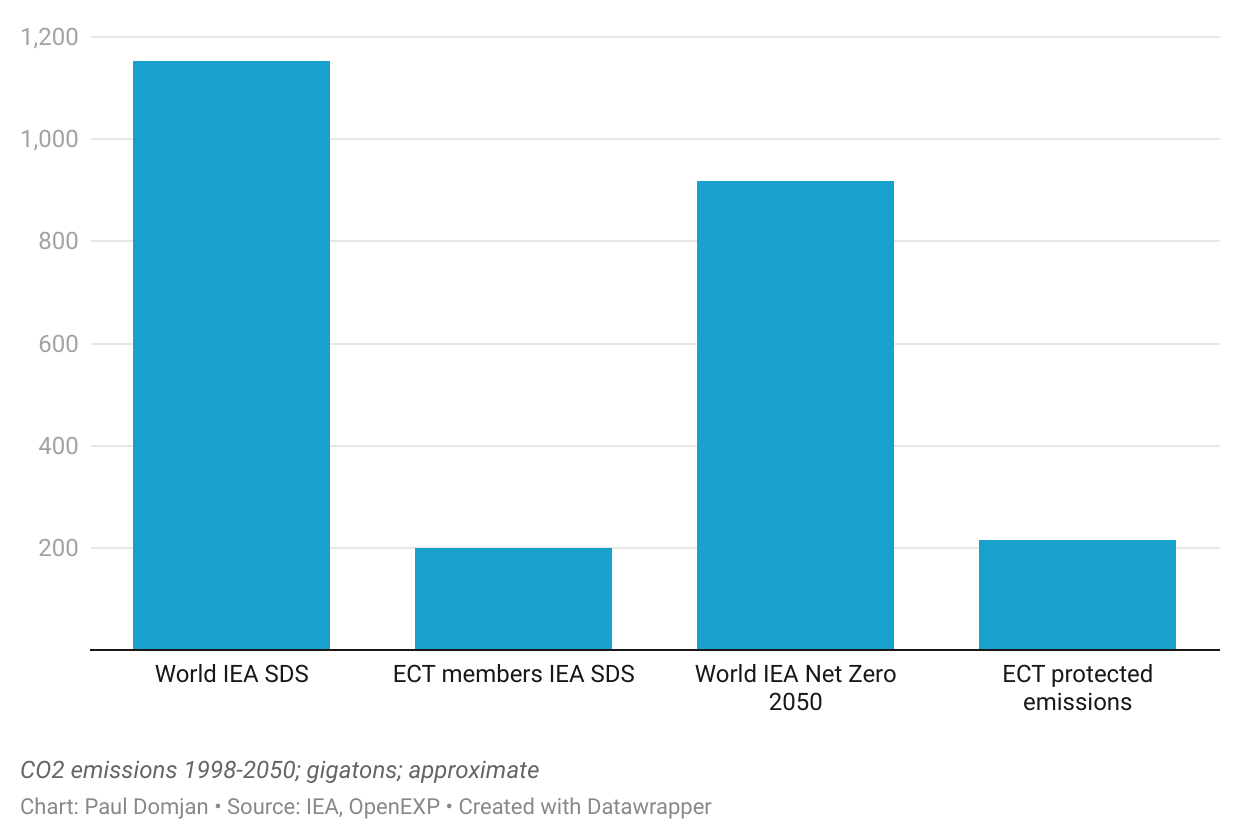 The EU is about to begin the ninth round of talks on reforming the ECT. The talks, which must balance climate needs with members’ legitimate interests in maintaining the originally intended investor protections, are making slow progress. Europeans are in the vanguard pushing for change, while others, notably Japan, want to retain the protections in the treaty as they stand today.

It seems more likely that the ECT’s impact on climate will be addressed through action outside of the ECT process. In September, the European Court of Justice ruled that EU companies could not use the ECT to claim against EU member states, limiting the scope of the treaty. Nevertheless, several European countries have threatened to unilaterally withdraw from the treaty and seek to undermine its sunset clause on the way out if the ECT cannot be reconciled with the Paris Agreement.

Although this might be an expedient resolution to the climate policy challenges posed by the ECT, the EU will need to be careful not to set a precedent for countries that walk away from inconvenient international obligations. Indeed, even though Russia had not ratified the ECT, it was still invoked in claims following the Yukos affair.