AMC is a meme stock, but emerging market cinema companies are worth watching

Trading Places was a 1980s movie starring Eddie Murphy. It features a homeless man, who is suddenly catapulted to the top of a massive corporation.

AMC, the world's largest cinema operator, has had a similarly dramatic change of fortune. Even Hollywood would be hard-pressed to imagine its rags to riches story.

Entertainment activities such as cinemas have suffered in the pandemic, and had to grapple with low operating cash flow as well as surging debt. On 31 December, AMC was staring at the abyss. Its market capitalisation was US$308mn, while its net debt was 37 times larger at US$11.5bn, and its bonds were priced for insolvency.

Three consecutive quarters of Covid-19 closures had drained it of cash. It was bleeding at a rate of US$120mn a month and was unlikely to last another quarter without a bailout. Despite operating 12,000 screens it could not even pay the popcorn suppliers.

Since then, AMC has skyrocketed. The stock is up nearly 3000% ytd, as investors pile in due to a meme campaign. It rose 95% on 2 June alone! Its market cap is now US$26.4bn which is three times its net debt. 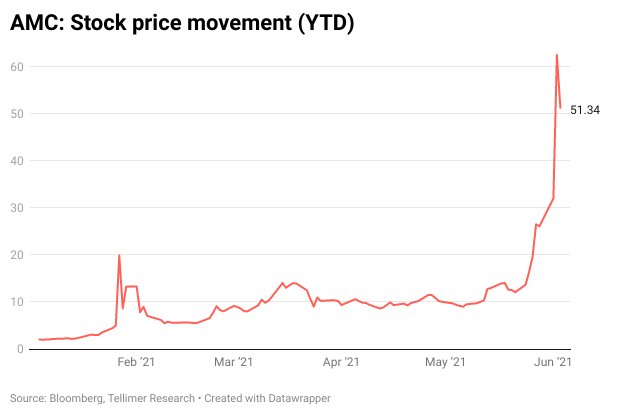 Meme stocks are companies targeted by retail investors in online discussion groups on platforms such as Reddit. There is a massive uptick in derivative trading in these names. AMC is now trading like a cryptocurrency, but with a movie theater attached.

But leaving aside the Reddit-driven boom, AMC is a symbol of the post-pandemic resurgence.

AMC's balance sheet has been buttressed and it has raised US$4bn since its dark days at the turn of the year. And as cinemas reopen in many countries people are now returning to the big screen experience. People are lining up to watch King Kong vs Godzilla – this year’s summer blockbuster.

There are cinema stocks in Emerging Markets that could see a similar bounceback, albeit not on the stratospheric scale of AMC.

Cinema groups such as Cathay (owned by MM2 Entertainment) were sitting ducks in the pandemic. They have high operating leverage, with high fixed costs such as rent, electricity and salaries.

However, despite the popularity during the pandemic of online OTT content platforms such as Netflix, the death of the cinema is highly exaggerated. It is a licensed business, with success being a function of the location and convenience of the cinema, alongside a pipeline of blockbuster content.

There is no collection risk in the business as moviegoers pay before they watch, and in good times the business can be a cash cow.

The following is a select list of Emerging Market cinema stocks:

Meme stocks tend to soar before crashing back to earth, as influential early adopters cash out and the news of selling spreads like wildfire online, causes a chain reaction. But while the AMC meme-stock blockbuster may not have a happy ending, there may be a better and more realistic sequel in Emerging Markets.