The big news this week is that Amazon is coming to Africa – the continent's 'Baby Amazons' may have to give up some market share, but could also be ripe for acquisition. Meanwhile, Nigeria’s persistent FX issues have left cUS$450mn of airline funds trapped in the country – making up a quarter of airlines’ trapped funds globally. Travelers will continue to bear the brunt with higher airfares in Nigeria, currently 3x more than peers, according to International Air Transport Association (IATA).

Nigeria’s 2023 election is a key subject again this week, with presidential candidates having now chosen their running mates, balancing religious and cultural concerns. And, as the election draws closer, Nigeria’s regulators have released guidelines on social media, but could this be a way of curtailing freedom of speech and expression?

Meanwhile, Guinea’s military leaders have set mining companies a hard deadline of 14 days to form a joint venture for an iron ore mine project, which has made little progress since the license was issued 25 years ago. We also note the rising local yields in Ghana with the one-year note printing close to 30%.

Amazon is coming to Africa – what does this mean for its EM rivals?

There have been media reports of a leaked document showing Amazon has plans to expand into Africa – specifically, Nigeria and South Africa – as well as Belgium, Chile and Colombia. Although there has as yet been no official statement from the tech giant, the report states that it plans to begin African operations in 2023 – South Africa in February and Nigeria in April. Rumours that Amazon has been recruiting in Nigeria support the claims in the report.

Amazon’s plans to expand to these newer markets is a wake-up call for the so-called “Baby Amazons” (emerging market e-commerce challengers), such as Jumia and Konga in Nigeria and Takealot in South Africa. It also perhaps shows that, despite the impact of inflation across Africa, the consumer market is still strong.

Jumia's shares fell by 6% in light of the news. However, as our colleague Nirgunan Tiruchelvam puts it, its cheap multiples and improving fundamentals bolster the chances of acquisition by tech giants like Amazon. 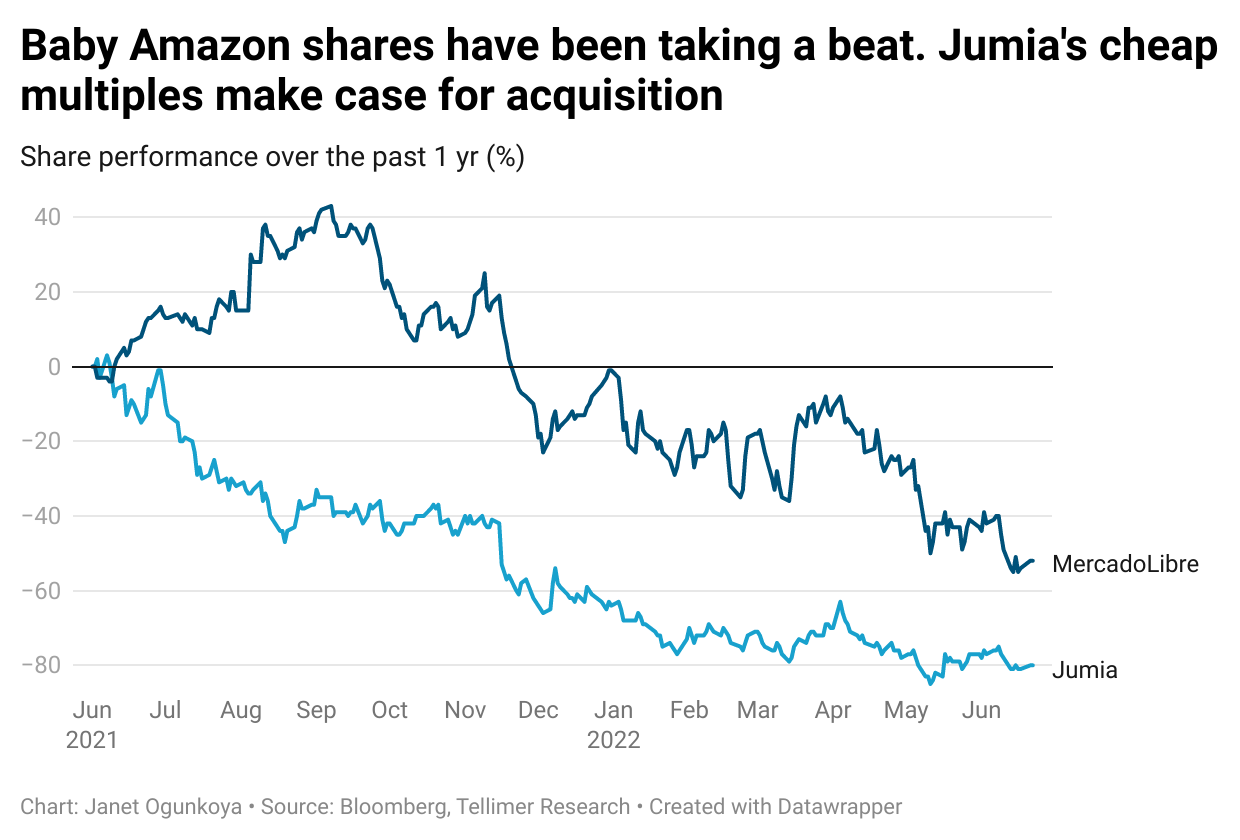 Nigeria holds the most trapped funds belonging to airlines (US$450mn)

At a conference in Qatar last week, the International Air Transport Association's (IATA) head of the MEA region stated that airlines’ unremitted revenues (trapped funds) in Nigeria have risen to US$450mn. This makes up 25% of the total US$1.6bn trapped funds that have been held back by central banks in various countries. Others include Zimbabwe – US$100mn; Algeria – US$96mn; Eritrea – US$79mn; and Ethiopia – US$75mn.

According to IATA, the trapped funds have forced airline operators in Nigeria to increase the fares they charge to as much as 3x those seen in other countries.

Airline operators are finding it very hard to operate in Nigeria and travelers are bearing the brunt by having to pay higher fares. This follows domestic airlines threatening to shut down operations across the country, in May, forcing the government to backtrack on plans to cut jet fuel subsidies. 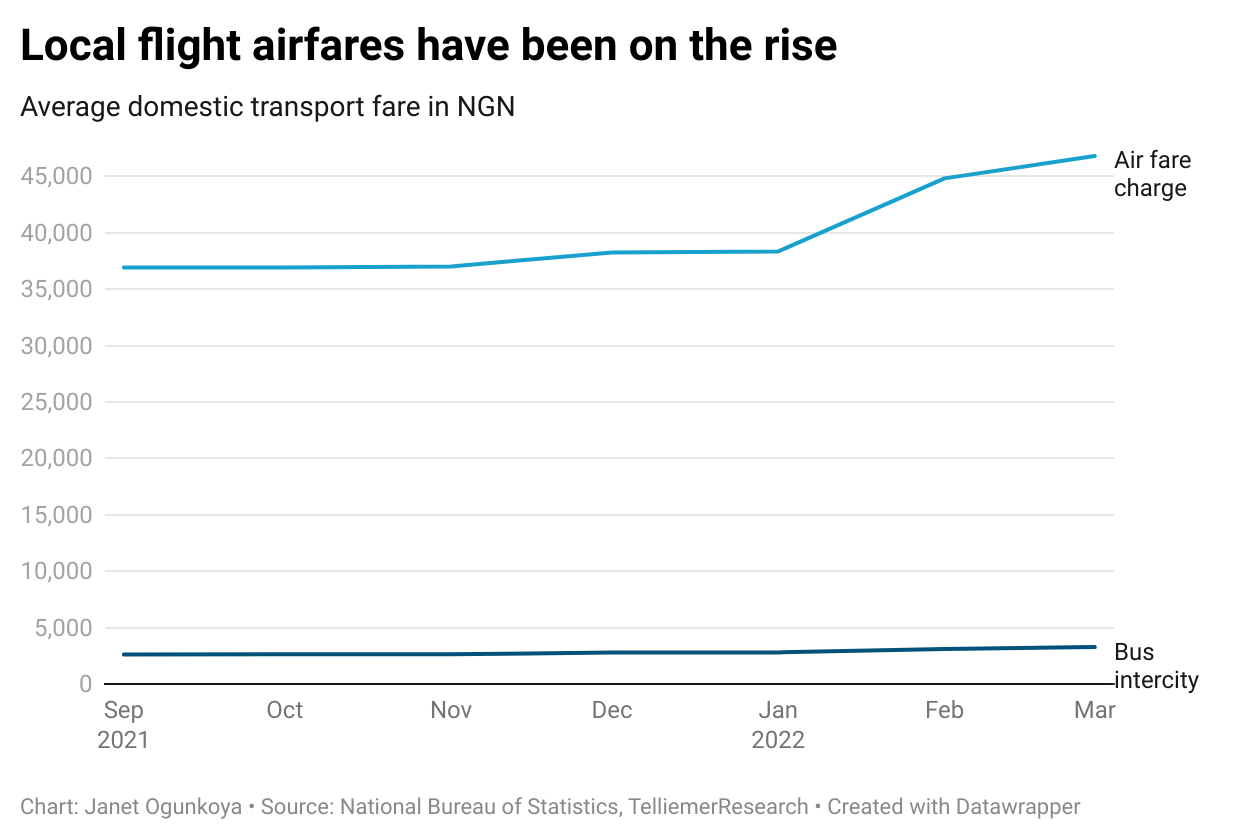 In our last sovereign analysis on Cote d’Ivoire, we highlighted its strong macro performance, which we expect to continue. We also noted the successful implementation of the national development plan and ENI's new oil and gas discoveries as upside risks to the growth story. The successful fund-raising activity is an additional welcome development.

Nigeria's government last week released a “draft code of practice” to guide the operation of social media platforms in the country. Regulating online privacy is becoming increasingly important across the world, so it is not surprising that Nigeria has joined in. The guidelines are not (yet) law, merely a set of rules provided by the National Information Technology Development Agency that it hopes the industry will engage with.

Last year, the government banned Twitter, claiming the platform facilitates insecurity, although the ban followed Twitter's removal of a post by President Buhari. The ban was lifted around seven months later – our suspicion was that the upcoming election was the main reason.

There are concerns that this new code of practice could be similarly twisted and used as a tool to curtail freedom of speech and expression, especially as the February 2023 election draws nearer.

Many things matter in a Nigerian presidential election but chief among them is religious affiliation and the ethnicity of the aspirants, rather than economic policies. Often, it can be a difficult balance to reach for political parties and religion has become a more important criterion in recent years as violence against Christians has increased. 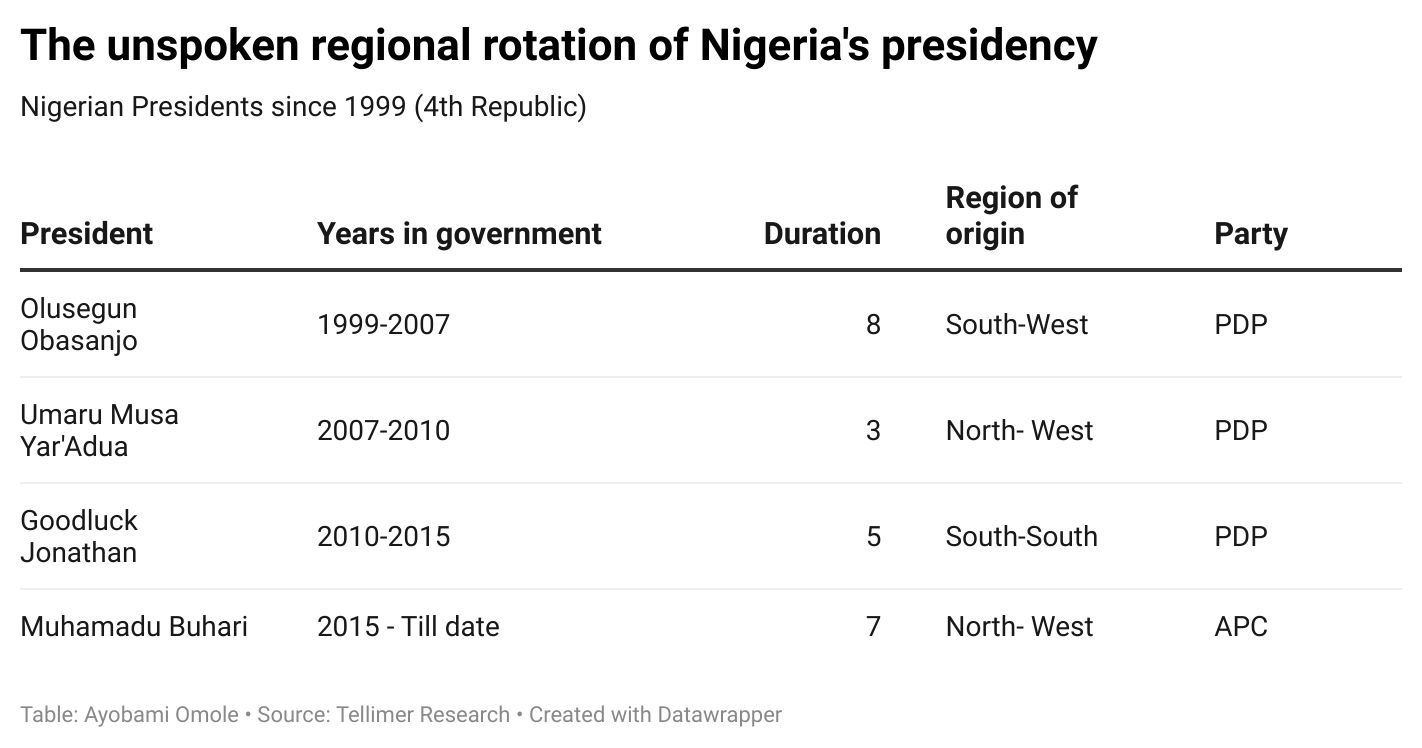 Going by public sentiment, the ideal balance for the 2023 election will likely be a southern president with a northern vice president. The religious distribution seems more flexible – a Muslim president and a Christian vice president or vice versa.

The dilemma for parties, however, is that most influential northern politicians are Muslims – which means that the ideal presidential candidate is a Christian southerner. But things are not shaping up that way and some churches are beginning to vocally express their dissatisfaction.

All of this is even more interesting when you realise that Nigeria is, constitutionally, a secular state.

On 17 June, Guinea’s ruling junta gave Rio Tinto and the Chinese-backed Winning Consortium Simandou (WCS) a 14-day ultimatum to finalise a joint venture (JV) to develop the Simandou iron ore mine. The patience of Guinea’s leaders with the mining companies is getting thin, with little progress having been made on the project since the mining license was granted to Rio Tinto 25 years ago. The site is believed to hold c4bn tonnes of iron ore.

In March, the government suspended operations at Simandou for two weeks. Upon resumption, an agreement was reached with Rio Tinto and WCS on infrastructure projects needed for the site’s operations, including developing a 670km railway costing cUS$15bn and with an ambitious completion date of 2024.

Upon completion, the Simandou mine is expected to produce 100mn tonnes of iron per year, which would give a much-needed boost to Guinea’s economy.

Nigeria’s purchasing managers' index (PMI) is expected to print lower in June, from 53.9 to 52.7, after a decline from 55.8 the previous month.

The Nigerian equities market has declined by 3.3% in the past week, bringing the ytd return to 20%. Sentiment has been broadly negative, with 59 losers and only 14 gainers. The major losses have been in blue-chip names such as MTNN, AIRTELAF, BUAFOODS, BUACEMENT, DANGCEM and INTBREW. 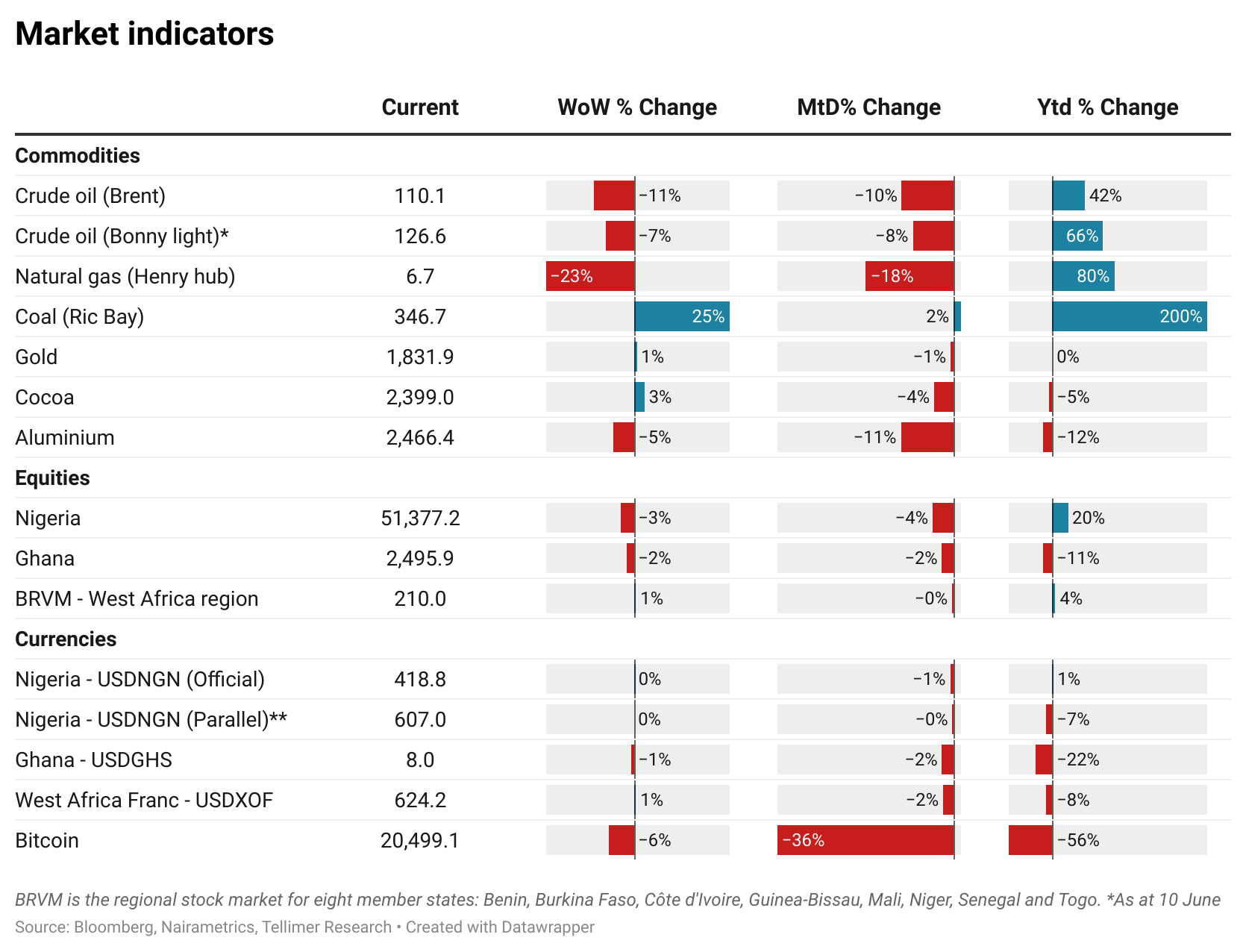 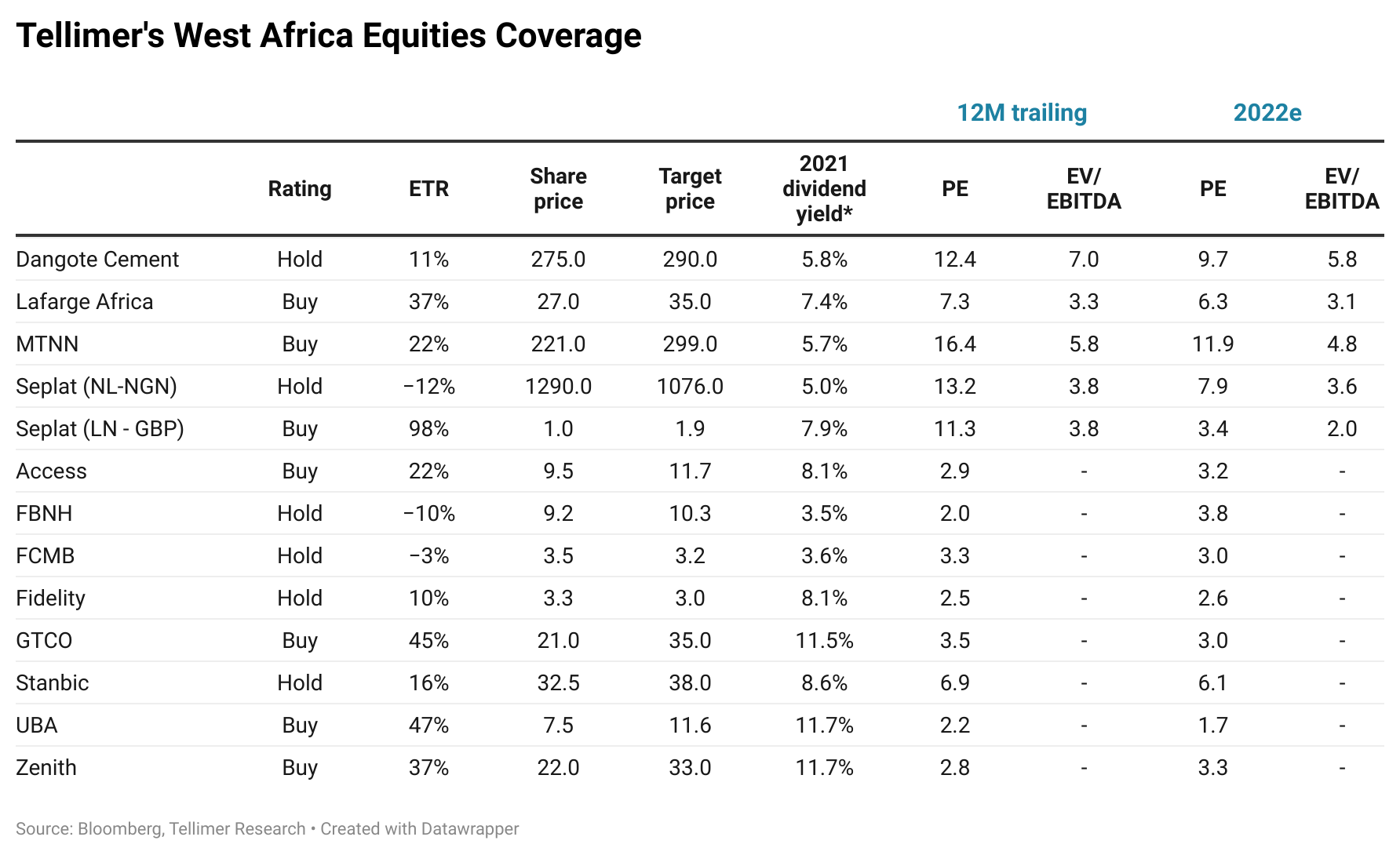 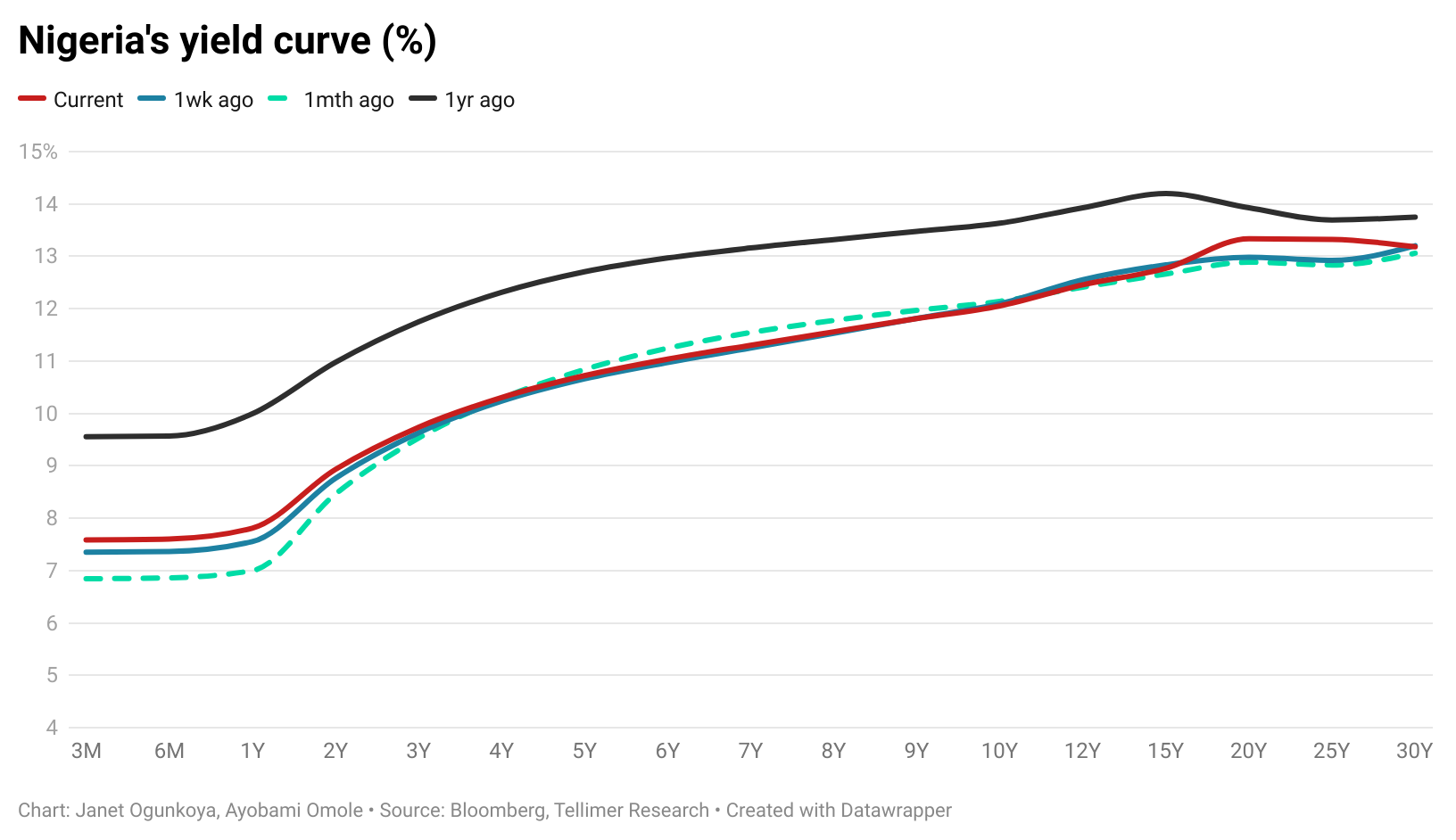 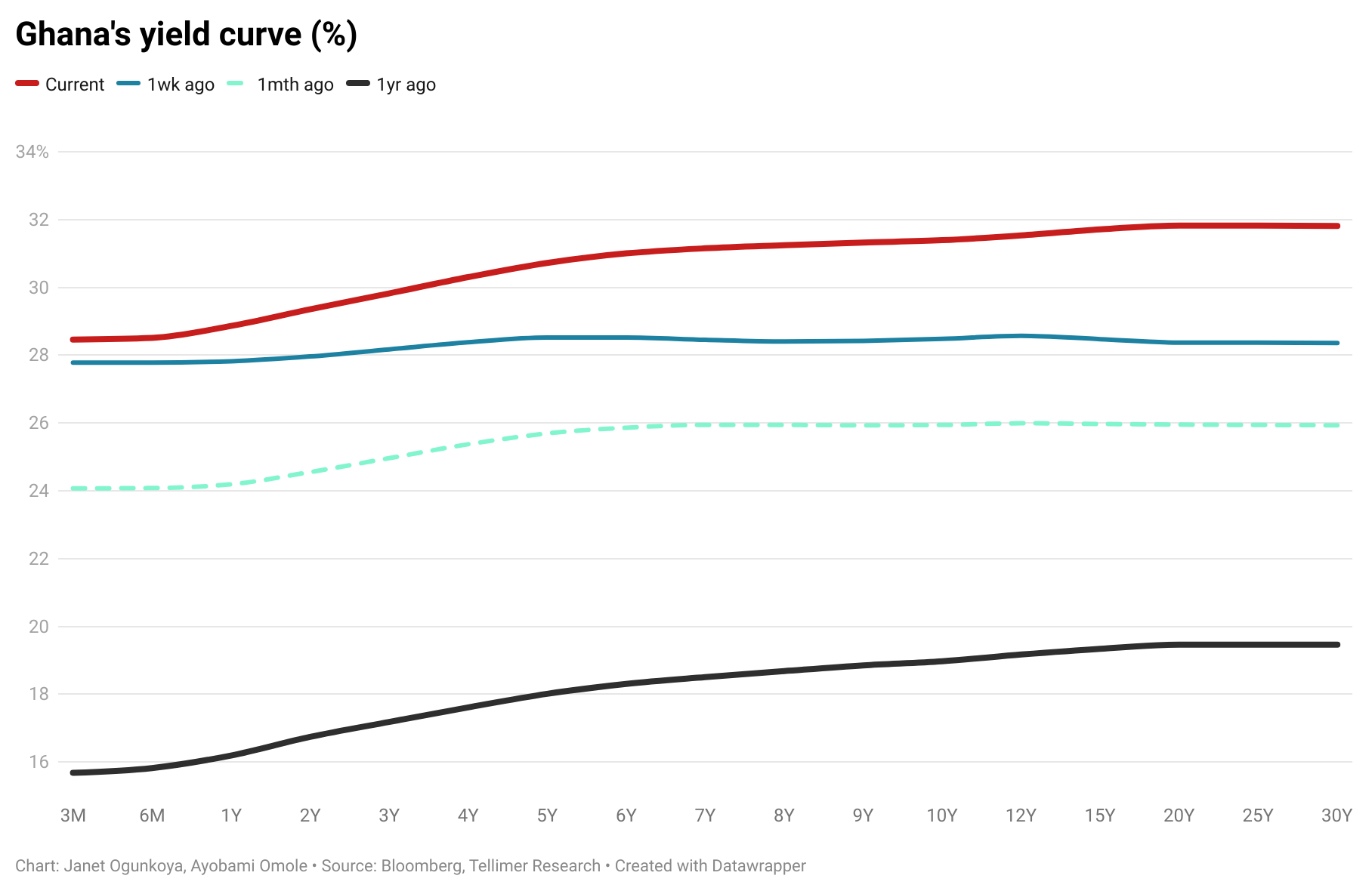