All eyes on Kenya rate decision, speculators turn more bullish on the USD

On the trade front, Kenya and Ethiopia have agreed on a pact that will create a free trade area that will facilitate easier cross-border trade. The Moyale One-Stop Border Post Procedure Manual, signed recently in Addis Ababa, will give the two countries a competitive edge concerning goods traded.

The deal seeks to encourage small-scale traders by developing a simplified framework to facilitate their business activities at the border. It will also help harmonise Kenya and Ethiopia’s trade regimes, particularly on agricultural products, to allow citizens from both countries to conduct business beyond the borders.

Provisional current account data showed that Kenya’s deficit was 5.5% of GDP in the 12 months to July 2021 compared to 5.0% of GDP in the 12 months to July 2020. According to the CBK, the wider deficit was due to lower service receipts as well as an improvement in imports, which more than offset increased receipts from agricultural export remittances. A persisting current account deficit is likely to place further pressure on the Kenyan Shilling, which remains on the defensive both on a month-to-date and year-to-date basis against the USD.

Sticking with trade dynamics, the Bank of Tanzania reported that the value of the country’s export of goods and services decreased by $405.3mn to $9bn in July, compared to the same period a year earlier. The decline was a result of the coronavirus pandemic, according to the BOT. The coronavirus pandemic led to the sharpest collapse in the value of exports and trade in Africa, and Tanzania in particular, due to the introduction of containment measures in many EU countries, which is the most important destination for African exports. The sharp decrease was mainly registered in the travel receipts, according to the report. However, there was an increase in the exports of gold, manufactured goods, and horticulture. 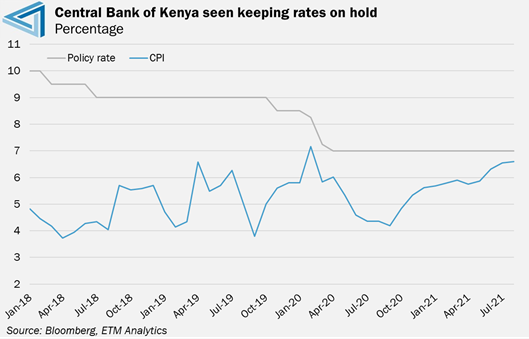 Kenya is in the spotlight today, with the central bank scheduled to deliver its rate verdict. Expectations are that policymakers will keep the central bank rate unchanged for a 10th straight meeting as the coronavirus pandemic continues to weigh on the business environment after the economy contracted last year for the first time in 29 years. Although inflation quickened to an 18-month high in August, it remains within the target range, giving the committee room to continue supporting the economy for now.

Also on tap this week is inflation data for Uganda and Kenya. While inflation in Uganda remains benign, consumer price growth in Kenya has accelerated in recent months, climbing to a more than 1-year high of 6.60% in August, underpinned by a marked rise in food prices. Looking ahead, inflation risks in Kenya remain skewed to the topside amid surging food and oil prices against the backdrop of sustained weakness in the currency.

Oil’s relentless bull run continues today, with the front-month Brent contract rising through the $80 per barrel handle for the first time since September 2018. WTI has also extended its recent gains and is trading above $76 per barrel with the YTD high of $76.98 in view. With this, the spread between Brent and the North American benchmark has widened out to over $4 per barrel, highlighting how the demand for crude in Europe amid surging natural gas prices is driving the price action. Until we start to see a notable correction for natural gas prices, this spread is expected to remain near its widest levels since the onset of the pandemic.

While international oil prices are likely to remain elevated in the coming months, Kenya’s high court judge yesterday temporarily suspended a tax that could raise the fuel price. The inflation adjustment of almost 5% on excise duties on petroleum products was suspended pending a decision on a petition against the move. The adjustment was set to become effective on October 1 and could have further raised fuel prices already at the highest in a decade. This should help quell inflation expectations for now.

Global focus is on China at the moment. In terms of Evergrande, the Chinese authorities will do whatever is necessary to avoid a systemic crisis by pumping in more liquidity into the market and vowing to protect consumers. It appears as if the authorities will significantly dilute the impact of any significant default event. Financial markets will take comfort from the news that the PBoC is monitoring the situation, providing liquidity, investigating, and assisting households. Evergrande shares are up.

Severe power constraints are impacting China's north-eastern industrial hub, and the authorities are coming under pressure to alleviate the shortage. Calls are mounting for China to ramp up their coal imports to help generate more electricity. For coal exporting trading partners, this is good news, but it likely also shows the impact of logistics constraints, higher shipping costs and the danger of a recovery that was artificially quick.

The USD has extended its rally today off the back of a steady rise in US Treasuries that are now starting to spook some riskier investment destinations. A continued rise in US Treasuries will likely keep bond outflows from emerging markets alive and will cause many to rotate back towards the USD. If sustained, it could also eventually translate into some concern in equity markets that the rallies will not be sustained amid rising interest rates, all of which could trigger a further rotation to the USD. For now, it appears that the USD is taking direction from US, Treasuries, as are other investment markets.

With the dollar in the spotlight at the moment, it is worthing looking at the speculative positioning on the greenback. A hawkish Fed and risk aversion in global markets have supported the USD and should see speculators remain bullish on the greenback. This will help keep the USD supported in the spot market but suggests that there are risks building to the downside should we see sentiment improve and some US data start to disappoint. 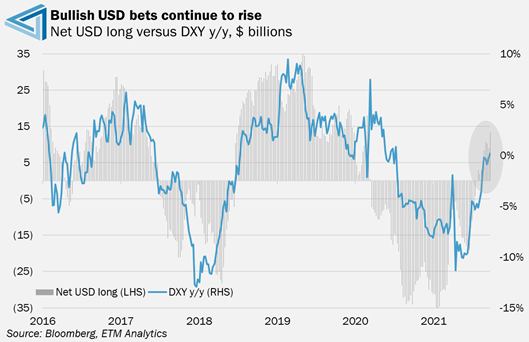 In the fixed income space, Ethiopia was unable to avoid another sovereign credit rating downgrade on Friday, with S&P lowering the country’s rating 'CCC+' from 'B-'. S&P meanwhile left Ethiopia’s credit rating outlook negative. The agency said in its statement that the negative outlook reflects the risk that it could lower Ethiopia’s rating due to increasing pressures on the availability of external funding and the potential inclusion of commercial creditors in the government's debt restructuring plans.

The global credit ratings agency cited heightened political instability and delays to debt restructuring as the two main contributors to the rating downgrade. S&P said that the escalation of the Tigray conflict, which broke out in November 2020, threatens the government's transformative reform agenda. This comes on the back of the government’s plan to restructure its debt. Recall that on September 16, Ethiopia's creditors' committee held its first meeting in a bid to restructure its debts under the joint G20's common framework and help create stable economic fundamentals. 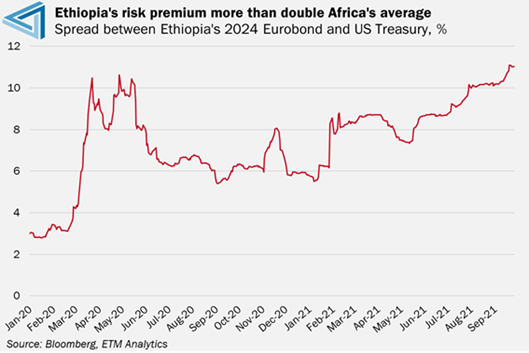 Last week, the government requested a new extended credit facility from the International Monetary Fund to replace an expired component of an existing lending program. Whether Ethiopia is able to secure a new, much-needed extended facility remains to be seen. Moreover, there have been reports that Ethiopia could face sanctions from the US, which would have severe ramifications for the country. On balance, the combination of economic and fiscal risks has led to a significant rise in Ethiopian bond yields as well as the risk premium demanded by investors for holding Ethiopian debt. For context, the premium demanded by investors for holding Ethiopia’s 2024 Eurobond over the respective US Treasury currently sits at around 10.99%, more than double Africa’s average of 550. Going forward, unless there is some resolve on either the political or fiscal front, we expect Ethiopia’s fiscal premium to remain amongst the highest in Africa.