Total passenger traffic of the 3 airport groups during May registered a 1,154.3% y/y rise (airports operated in Mexico). An easier comparative base and greater dynamism in demand boosted passenger figures, which in the aggregate exceeded expectations, showing a 1,154.3% y/y growth (+13.2% m/m) and representing 88.3% with respect to 2019 traffic, compared to our estimate of 75.0%-85.0% for airports in Mexico. The traffic with the greatest weight in the total, domestic traffic (65.1% of total aggregate passengers), presented an increase of 882.5% y/y and international traffic of 2,491.4%.

·      Oma announced that the Board of Directors authorized a tender offer by Aerodrome Infrastructure, an affiliate of Fintech, for up to 24.9% of the total outstanding shares of the airport group for MXN 137.00 per share. It should be noted that the tender offer period is from May 24 to June 22.

·      The Federal Aviation Administration (FAA) downgraded Mexican aviation to Category 2, as it did not comply with the minimum safety standards of the International Civil Aviation Organization (ICAO). Therefore, Mexican airlines flying to the US will continue to operate under the conditions prior to this downgrade, but will not be able to launch new routes, nor increase or reduce frequencies, in addition to the fact that it also affects (restricts) code-share programs.

·      The International Air Transport Association (IATA) favorably updated its global outlook for the sector, which incorporates a full recovery in passenger numbers in 2023 (vs. previous estimate of 2024). The agency forecasts that in 2021 passenger numbers will recover to 52% of pre-pandemic levels, by 2022 it would reach 88% and by 2023 it would stand at 105%.

Conclusion... May passenger traffic at airports operated by private groups in Mexico showed a faster pace of annual growth that exceeded estimates. Considering also operations outside Mexico, Asur once again stood out for registering the highest y/y increase; however, Gap was the closest to pre-pandemic (2019) levels. This month's figures point to a greater dynamism in passenger demand in the coming months, despite the downgrade to the Mexican aviation category, in which we foresee a moderate impact for airport groups. On the other hand, we must continue to monitor the evolution of restrictive measures in other countries (mainly in the US, which is our main tourist supplier), which we believe could diminish relatively soon, and thus trigger a better performance on the international side. Therefore, we remain optimistic about the sector's favorable outlook. In our institutional portfolio we have exposure in Gap with a 2021 PT of MXN 245.00 per share and in Oma with a 2021 PT of MXN 146.00, both with a Buy recommendation. On the other hand, for Asur our PT 2021 is MXN 414.00 per share and we have a Buy recommendation.

In the following graphs below, we can observe the evolution of the total passengers of the airport groups as a percentage of the 2019 figures in the last 12 months and the performance of their shares vs. S&P/BMV IPC. 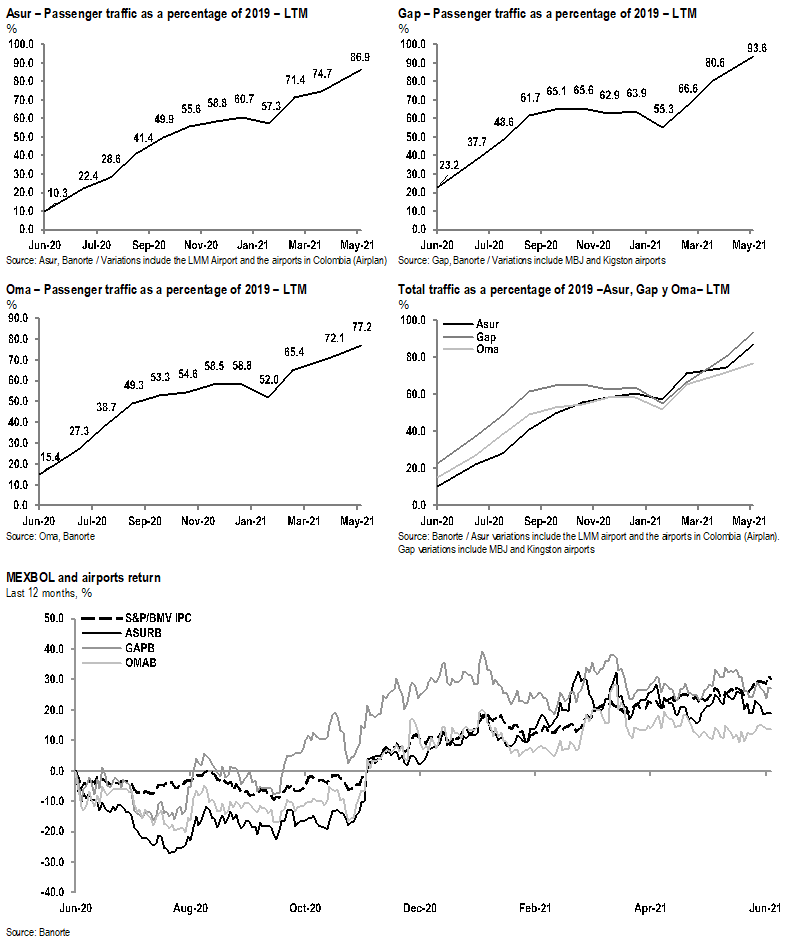 Sector comparison – Figures at May 2021 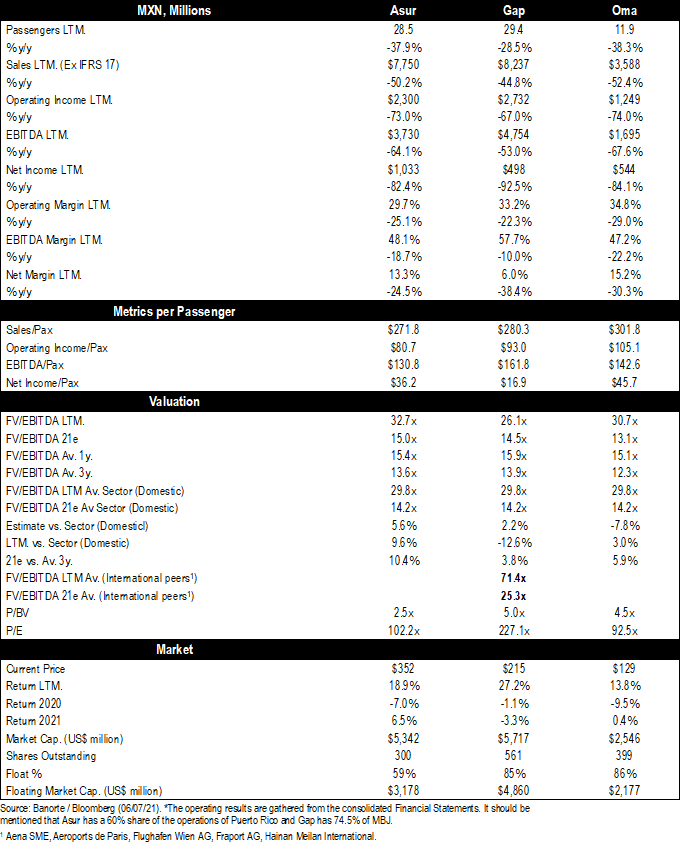