Two issues that have been prevalent in Nigeria over the past year – the FX crisis and oil theft – feature again this week. The prolonged FX crisis is making business particularly difficult for airlines, which are threatening to stop flying from Nigeria. And nine months from the end of his term, Nigeria'President Muhammadu Buhari has promised to stop the incessant oil theft – we think this effort is too late and might not be successful. But it is not all bad news, 5G commercial rollout commences.

In other parts of the region, Ghana has hiked interest rates again, but the IMF's aid seems to be the magic wand investors are waiting for. And in Benin, the football federation moves to change the country's national footballs team's nickname to something "more reflective of their aspirations".

Emirates to stop flights to Nigeria due to FX crisis

Emirates, one of the largest international air operators in Nigeria and globally, announced that it will suspend flights to and from Nigeria beginning 1 September, due to the airline's inability to repatriate its investments. As of July, US$85mn of the company's funds were stuck in Nigeria, and the figure increases by US$10mn monthly. The International Air Transport Association (IATA) announced in June that US$450mn of international operators' revenue was withheld.

Nigeria's persisting FX crisis has been a thorn in the flesh of foreign portfolio investors. But Emirates' move shows the gravity of the central bank's failed policies of restricted FX access. According to the IATA, more airlines could follow suit, if the FX crisis persists. Travellers from Nigeria already face airfares up to 3x higher than in other countries.

Ghana hikes rate to save the free-falling Cedi

The Bank of Ghana (BoG) hiked its main interest rate by 300bps to 22% (a bigger move than analysts expected). It also increased the primary reserve requirement ratio from 12% to 15%, which will be phased in gradually between 1 September and 1 November. This increase comes after the BoG held rates in July, following concerns around economic growth. However, given the debt situation (half of the country's debt is in foreign currency), keeping the Cedi (which has devalued by c37% ytd) and inflation (currently at 31.7%) under control is essential, especially in light of the strengthening dollar.

In the local bond market, risk-off sentiment persists, and Ghana bond yields continue to increase. The magic wand investors are looking for remains the IMF. The government started discussions with the Fund in July for assistance of up to US$3bn.

Nigeria's President Buhari has ordered security agents to clamp down on crude theft, which oil leaders have described as an "existential threat" to the oil sector in Nigeria. The president’s statements came just a few days after neighbouring Equatorial Guinea seized a 3mn-barrel-capacity oil tanker suspected to be carrying stolen Nigerian crude. 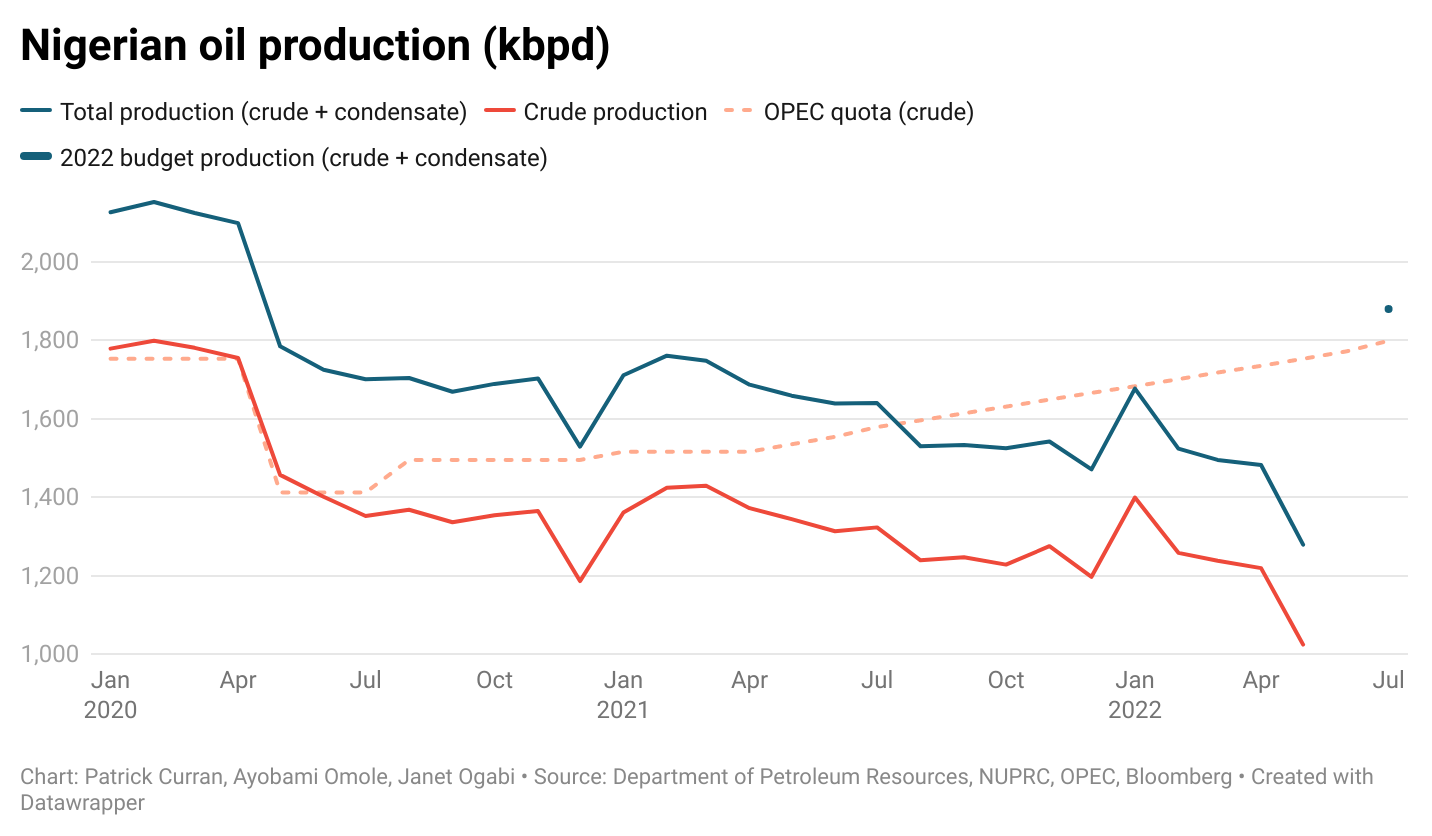 The menace is estimated to cost Nigeria c200kbpd of stolen oil daily, according to NNPC head Mele Kyari. At an average US$100/bbl oil price, Nigeria may have lost US$4.8bn to oil theft so far this year. This also partly explains the country's c400kbpd shortfall in production versus its OPEC quota and has left Nigeria unable to benefit from higher crude oil prices amid mounting oil subsidies. That said, the president’s orders are good news and will hopefully stop the losses caused by the faceless groups. The Niger Delta militant attacks that ended in 2017 were eventually won with peace talks.

Labour unions in Nigeria's power sector threatened and abruptly called off strike action over unpaid wages to staff since 2019 and poor labour conditions. On 17 August the union had held a nationwide strike shutting down the entire country's 4,800 MW power grid, but gave a two-week extension after intervention from the government.

Should the union's conditions remain unmet by the government, the entire country could face another blackout, resulting in more economic losses. Earlier this year, there were frequent grid collapses and nationwide blackouts.  The situation in Nigeria differs significantly from Ghana, where the government announced a tariff hike in the past few weeks in a bid to cope with rising operation costs – including workers' salaries.

The Benin Football Federation has announced plans to change the national football team's nickname from The Squirrels to Cheetahs, a name the federation considers evocative and better reflecting the teams' ambition. 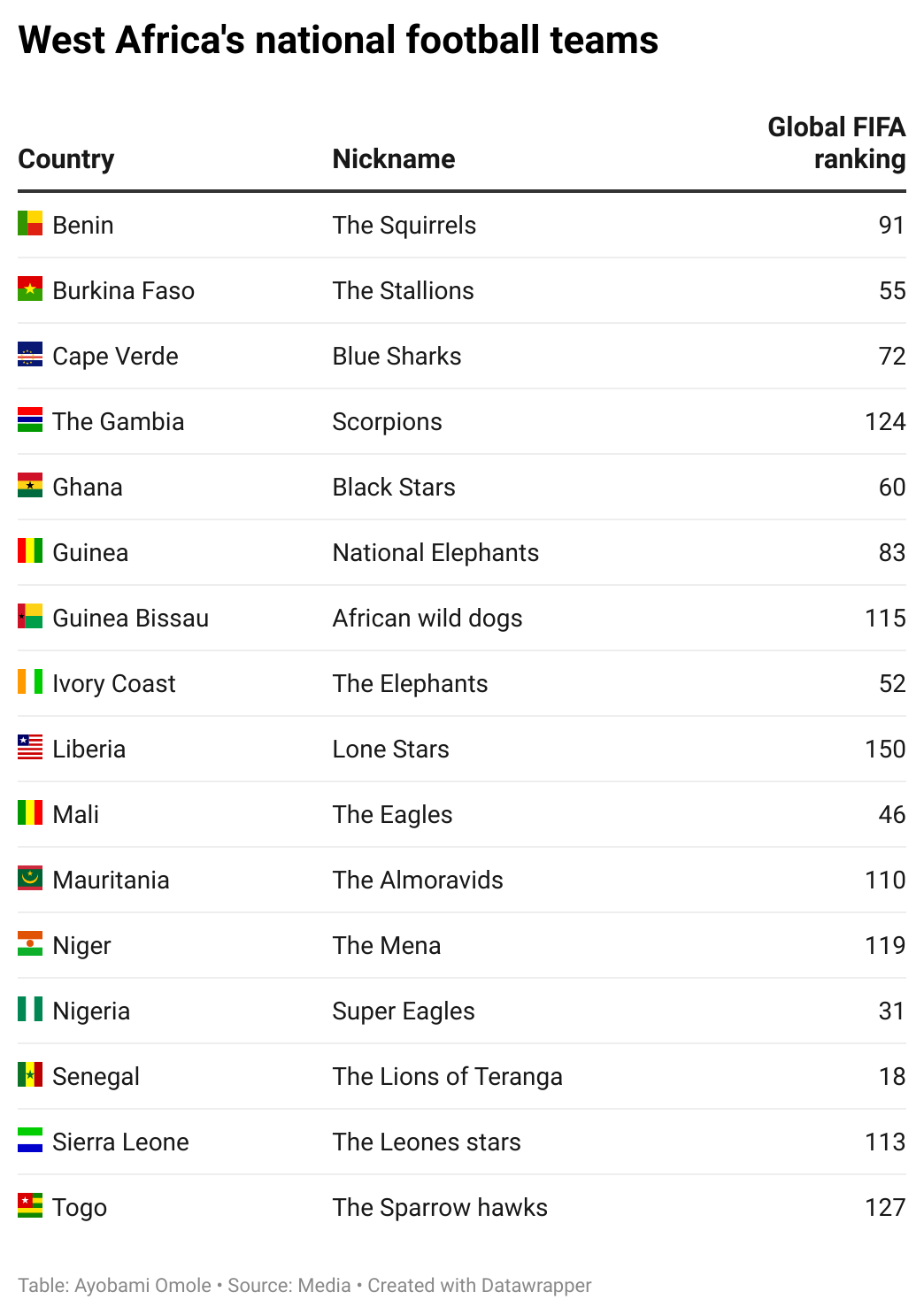 The Benin squirrels rank 9th in West Africa and 91st in the world according to FIFA's ranking. Although the name change is still subject to approval, we doubt the name change will impact on team performance.

Nigeria was one of the first countries to launch a Central Bank Digital Currency (CBDC), in response to the rising adoption of cryptocurrencies for in-country and cross-border transactions. As we highlighted last week, Nigeria is the most crypto-obsessed country in the world and a strong driver has been the Central Bank of Nigeria's (CBN) policies that have reduced the public's trust in the naira.

Ten months after launching, the eNaira app has just c840,000 downloads and 270,000 active users, but the CBN is targeting 8mn users for the next phase. For context, there are about 50mn unique bank customers in Nigeria (based on the number of unique Bank Verification Numbers). The CBN has claimed that its mandate is to target the unbanked through the eNaira, but we think it might be unrealistic given that an online internet-enabled model of financial services has been ineffective in attracting the financial excluded.

In addition, as we said previously, we expect central banks to tread carefully with CBDCs, to preserve financial stability and maintain the usefulness of banks. Measures are likely to be put in place to limit individual holdings of CBDCs as well as restrict transaction sizes, which in turn will reduce the attractiveness of CBDCs as an alternative to bank deposits.

Eight months after receiving a 5G license, MTN Nigeria is finally commencing the pilot stage of its 5G rollout. MTNN, Airtel Nigeria and Mafab Communications were the only three participants in the auction, as the other two local operators did not meet the NCC's bidding requirement. Airtel Nigeria was priced out of the 5G race, leaving the country's leading mobile network operator, MTNN, and recently incorporated Mafab Communication. Of the two winners, only MTNN has announced the commencement of operations.

As previously highlighted, we believe MTN has a competitive edge given its operational experience. However, Investors should remain cautious. As much as this is a good development for MTNN and will move Nigeria towards faster internet, it is important to remember that the 5G rollout is a long game.

Nigeria equities market posted a loss of 2.0% in the past week, taking the year-to-date gain to 14%.

As interest rates pick up, local Nigerian investors are likely to exit the equities market. Therefore, the equities market continues its losing streak. Looking ahead, we expect interest in the Nigerian market to remain tepid, especially as we draw the curtains on earnings releases. 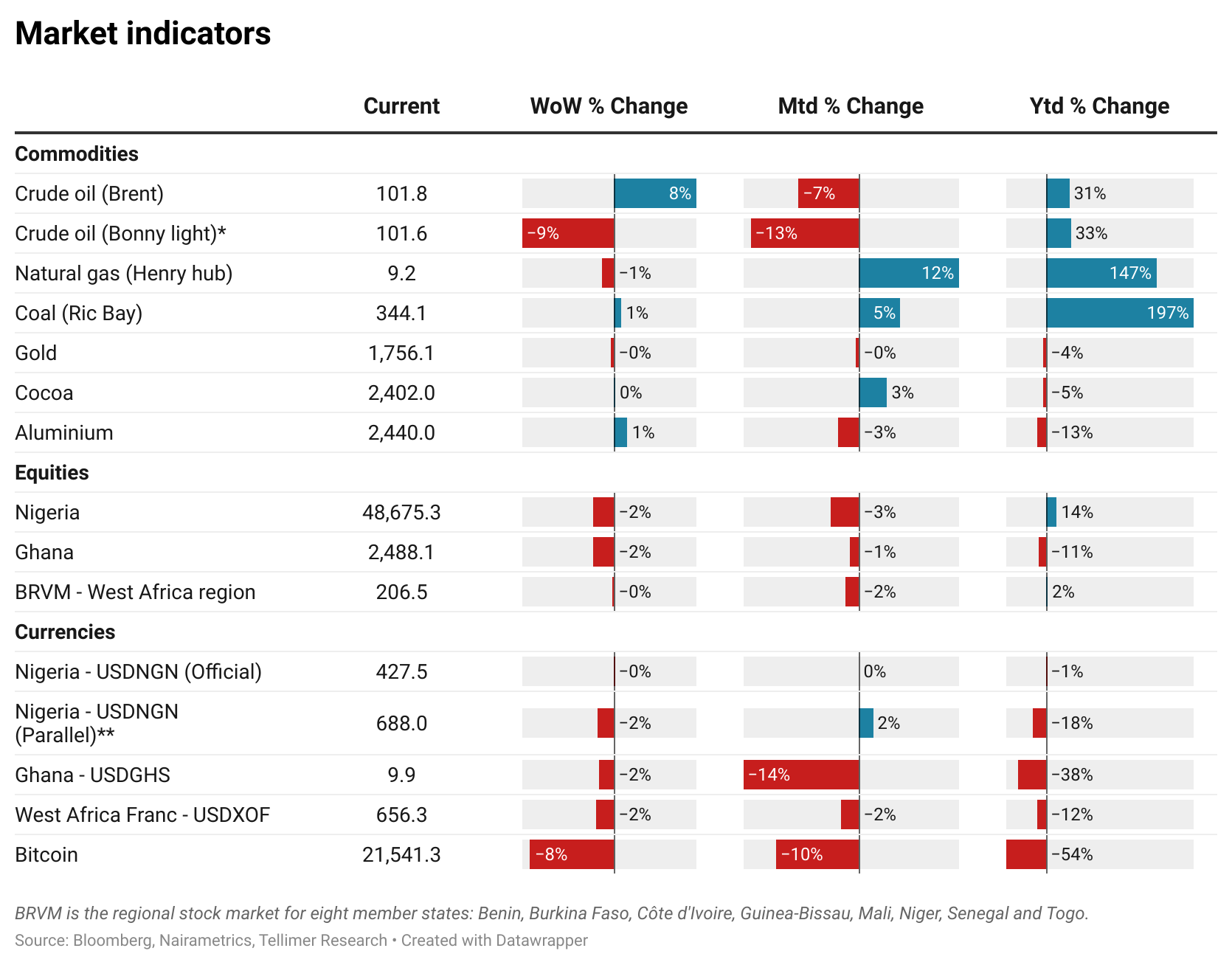 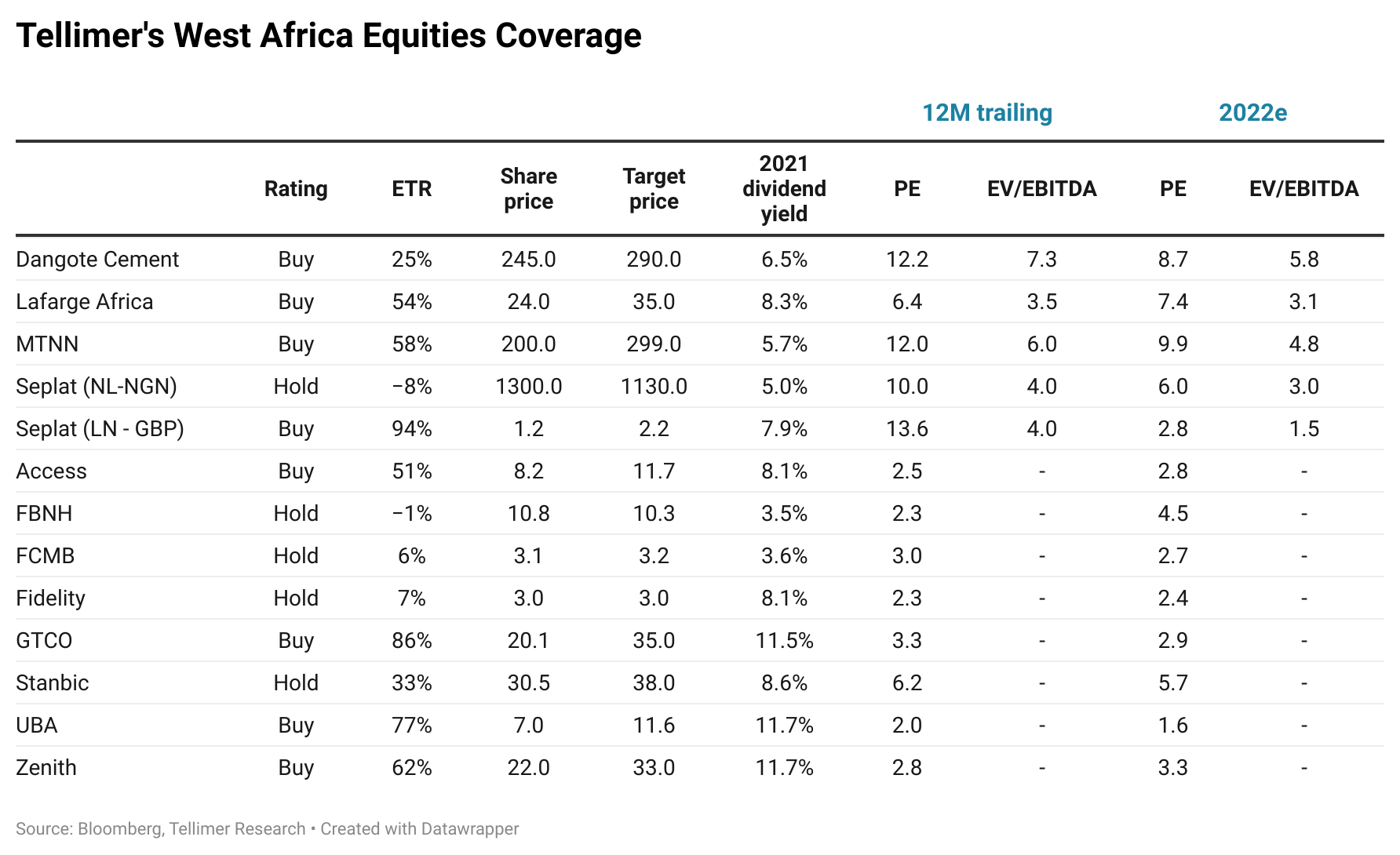 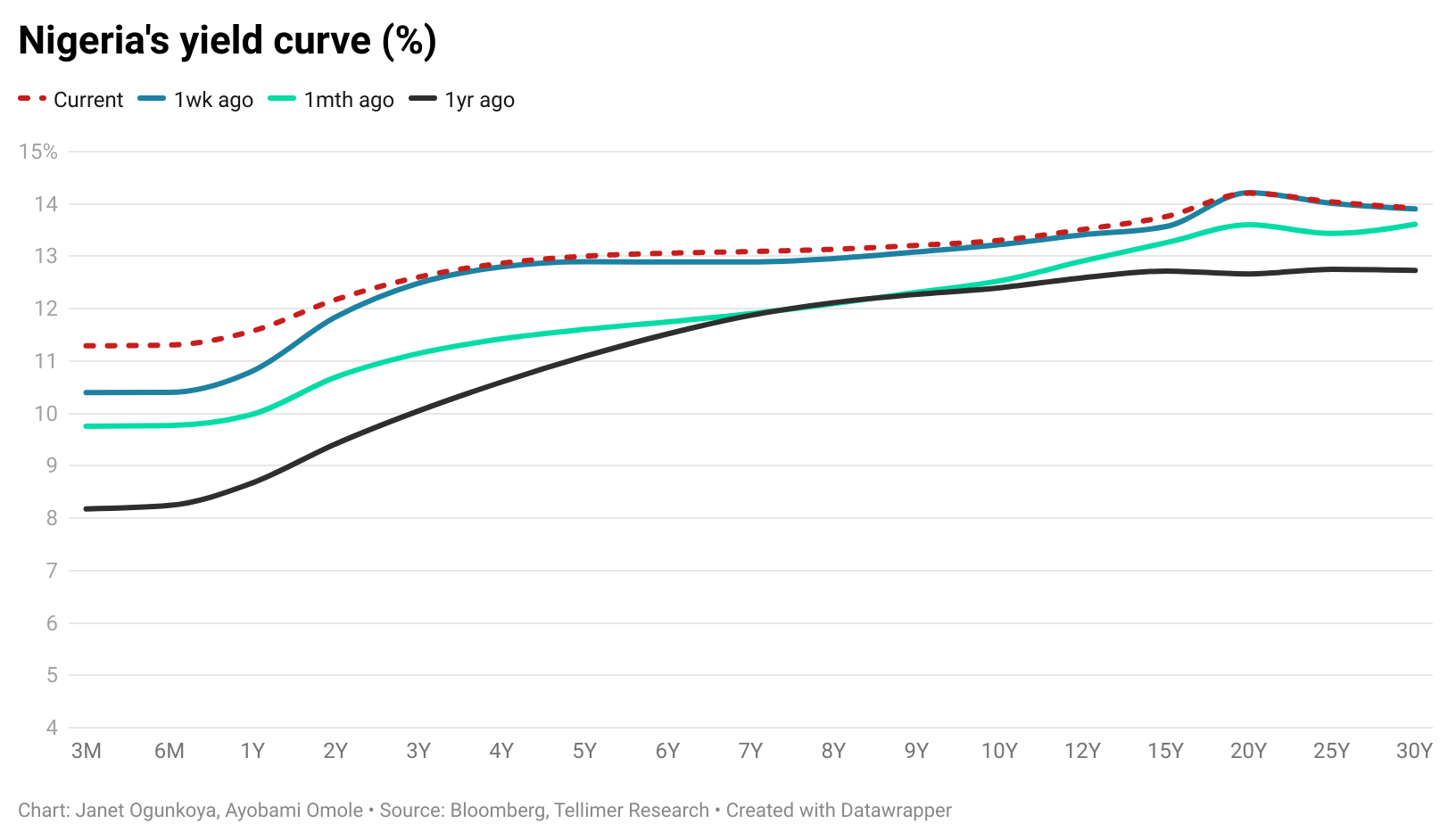 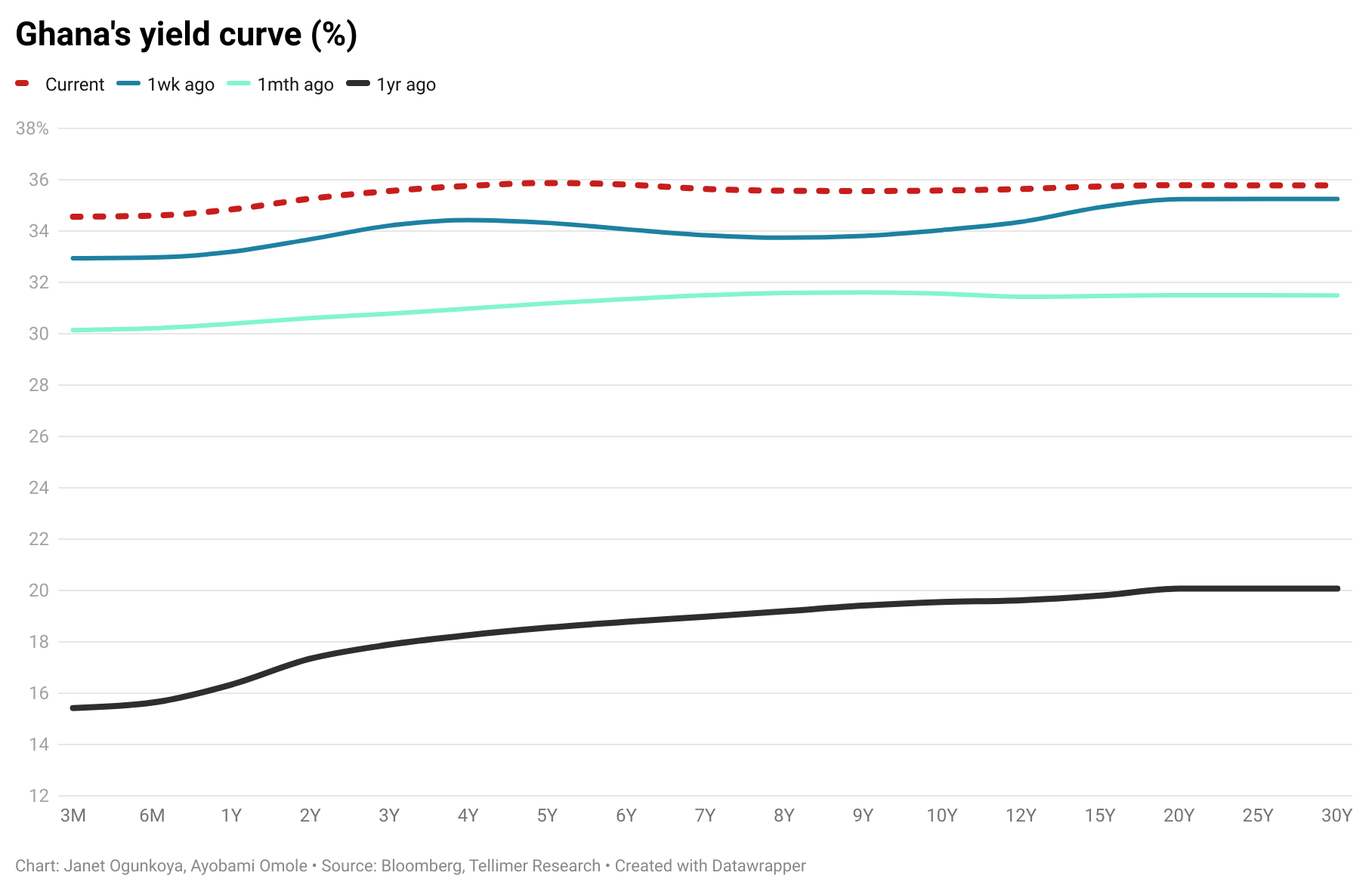