Foreign Direct Investment in Africa more than doubled in 2021 to US$83bn. Although the numbers were inflated by a one-off corporate transaction in South Africa, the growth is impressive nevertheless. However, recent economic woes triggered by spiralling inflation, Russia's invasion of Ukraine and rising rates mean the growth could be short-lived in 2022.

In Cote d'Ivoire, new oil and gas discoveries made by oil major Eni, which increases the company's reserves by 25%, could lead to more investments in the country's growing hydrocarbon industry. Meanwhile in politics, Nigeria’s President Buhari faces impeachment threats while Guinea’s junta leaders accept a two-year transition to civilian rule.

We also highlight the rising local yields in Nigeria in our markets section, as 1-yr yields have jumped 200bps mom to 10%, similar to levels last seen a year ago.

Cote d'Ivoire is getting closer to becoming a major oil producer by 2023, after new offshore oil and gas discoveries were made by oil major Eni in the Baleine exploration well. This comes less than a year after the first discoveries were made in September 2021 and increases the oil major's reserves by 25% to as much as 2.5bn barrels of oil and 3.3tn cubic feet of gas. Eni is the major operator on the asset (90% stake versus Cote d'Ivoire's state oil firm Petroci's 10%) in the exploration phase. Extraction is expected to begin in 2023.

Monetising the Baleine exploration well is the major endgame for Cote d'Ivoire. The likes of Total and Tullow Oil already have stakes in Cote d'Ivoire's oil and gas assets, but the country only churns out c30kbpd in oil production (as of March 2022). 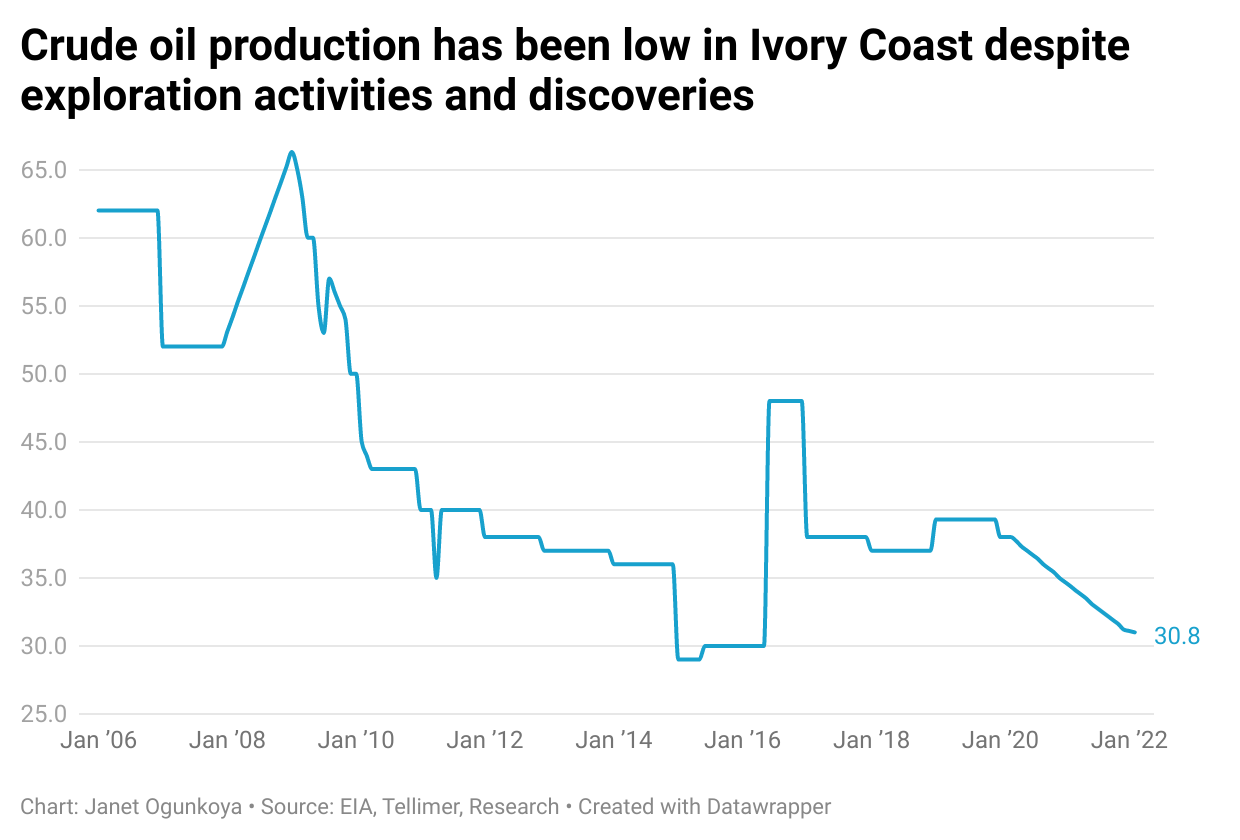 We have previously highlighted that many African countries are eager to explore their hydrocarbons potential, especially as oil majors seek to phase out fossil fuel production and focus on cleaner energy fuels. The current global oil flow reshuffle and the IOC exits in leading producers – Nigeria and Angola – could provide an opportunity for other emerging producers such as Cote d'Ivoire.

Foreign Direct Investment (FDI) flows to Africa more than doubled in 2021 to US$83bn from US$39bn in 2020, according to the World Investment Report. FDIs to West Africa was the second highest in the region at US$14bn, while Southern Africa led the pack at US$42bn – a one-off intra-firm financial transaction in South Africa, the Naspers-Prosus share exchange deal, inflated the total.

The tides are, however, likely to turn in 2022 as soaring global inflation and the twin shocks of war and rates weigh on Africa. 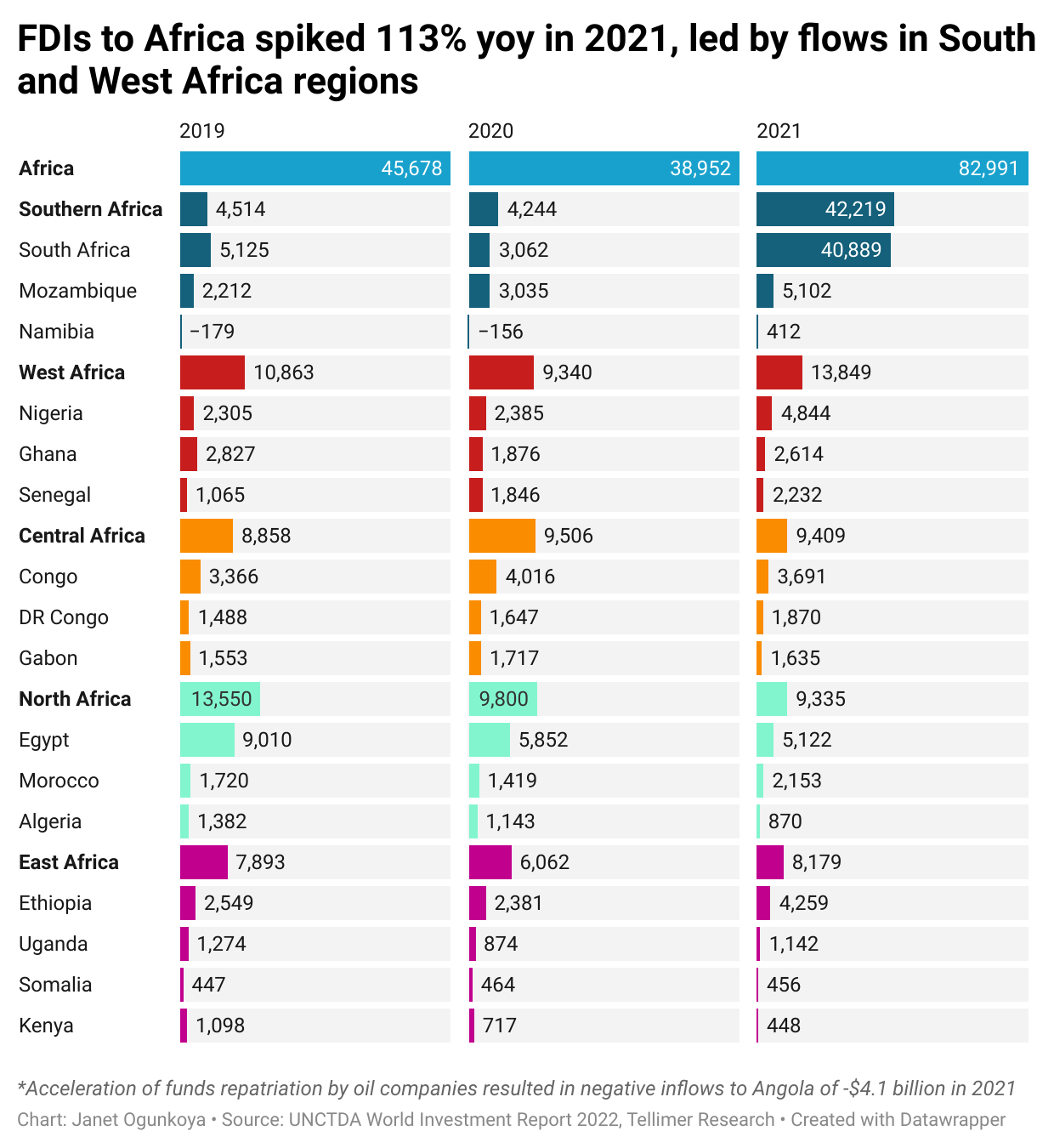 Last week, Nigerian opposition senators pushed for President Muhammadu Buhari’s impeachment over the country’s worsening security problems (increased terrorism in the North and kidnappings across Nigeria). A few other senators from the All Progressive Congress (APC) have also decided to back the impeachment plan.

As we highlighted in our recent report, President Buhari’s stewardship of the economy has been nothing short of disappointing since he took office in 2015, recording average growth of just 1.2% from 2015-19, leaving Nigeria mired in a prolonged period of stagnation. 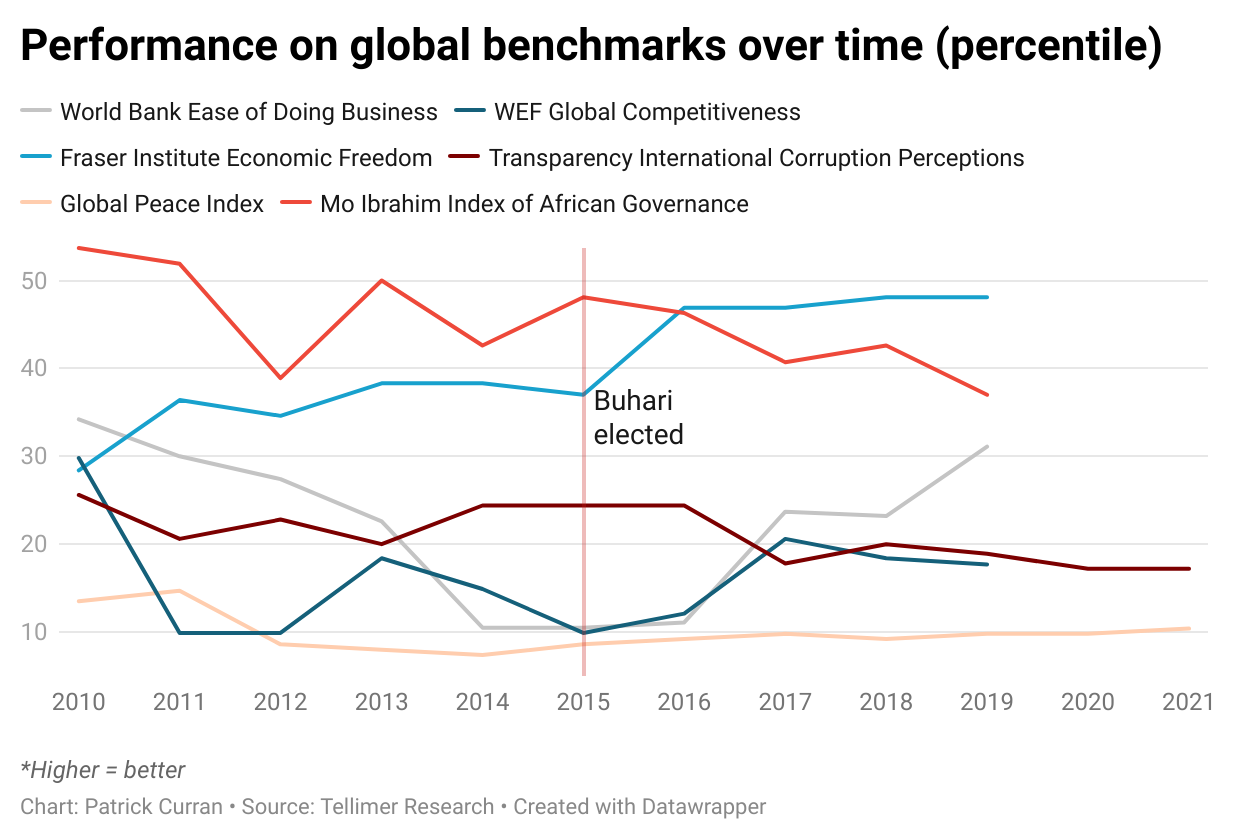 In addition, there has been limited progress, if not outright backsliding, on Buhari’s purported core strengths of insecurity and corruption, with Nigeria’s rank stagnating in the Global Peace Index and falling in the Corruption Perceptions index and Mo Ibrahim Index of African Governance during Buhari’s tenure.

The success of the impeachment plan is unlikely for now, given that APC is the majority party. But this further highlights the growing dissatisfaction towards the ruling party and could affect the party's chances at the upcoming 2023 election.

A joint venture (JV) for Guinea’s Simandou railway and port has finally been formed. The JV will have Rio Tinto, Chinese-backed Winning Consortium Simandou (WCS) and the government as partners. The companies gave the government a 15% stake in the JV and it does not have to contribute to the capital required to build the project. The contention over the military government’s stake had initially led to the shut down of the project on 3 July.

Details on the JV are expected to be finalised this week. Upon completion of the project, the Simandou mine – the world’s largest undeveloped iron ore project – is expected to produce 100mn tonnes of iron per year, which would provide a much-needed boost to Guinea’s economy.

This week, an ECOWAS official announced that the junta leaders in Guinea had agreed to a 24-month transition plan. There have been some reports in the media that Guinea's government spokesman has denied lowering the duration of the transition. Nevertheless, the announcement has managed to calm protesters against the Junta government for now.

About 7 million voters were called to elect the 165 deputies in their National Assembly in Senegal last week. While awaiting an official report from the electoral body, the head of the president’s coalition Aminata Toure said that it had won 30 of the country’s 46 administrative departments, at the time of writing. This gives the coalition a slim parliamentary majority. However, the opposition coalition have disputed her remarks and claimed that they had a “comfortable majority”.

These elections are an important test for President Macky Sall (who has consistently been criticised for his authoritarian grip on power) after local elections in March saw the opposition win in several major cities.

Ghana’s inflation increased for the 13th consecutive month in June to 29.8%, despite the rate hike in May. A weak cedi, increased food prices and e-levy tax have all led to soaring inflation. For most African countries, including Ghana, we expect inflation to worsen as the impact of higher energy and commodity cost feeds through.

The Nigerian equities market gained in the past week, with the all-share index increasing by 0.8% and raising the year-to-date return to 18%. This partly reversed some of the losses last week, owing to investor interests in blue chip stocks — MTNN, GTCO, ZENITHBANK. The market breadth was positive, with 36 gainers and 28 losers.

Looking ahead, we have a negative outlook on the Nigerian equities market as the increasing domestic yields (see yield curve below) and the absence of foreign investors will put a dampener on local participation. 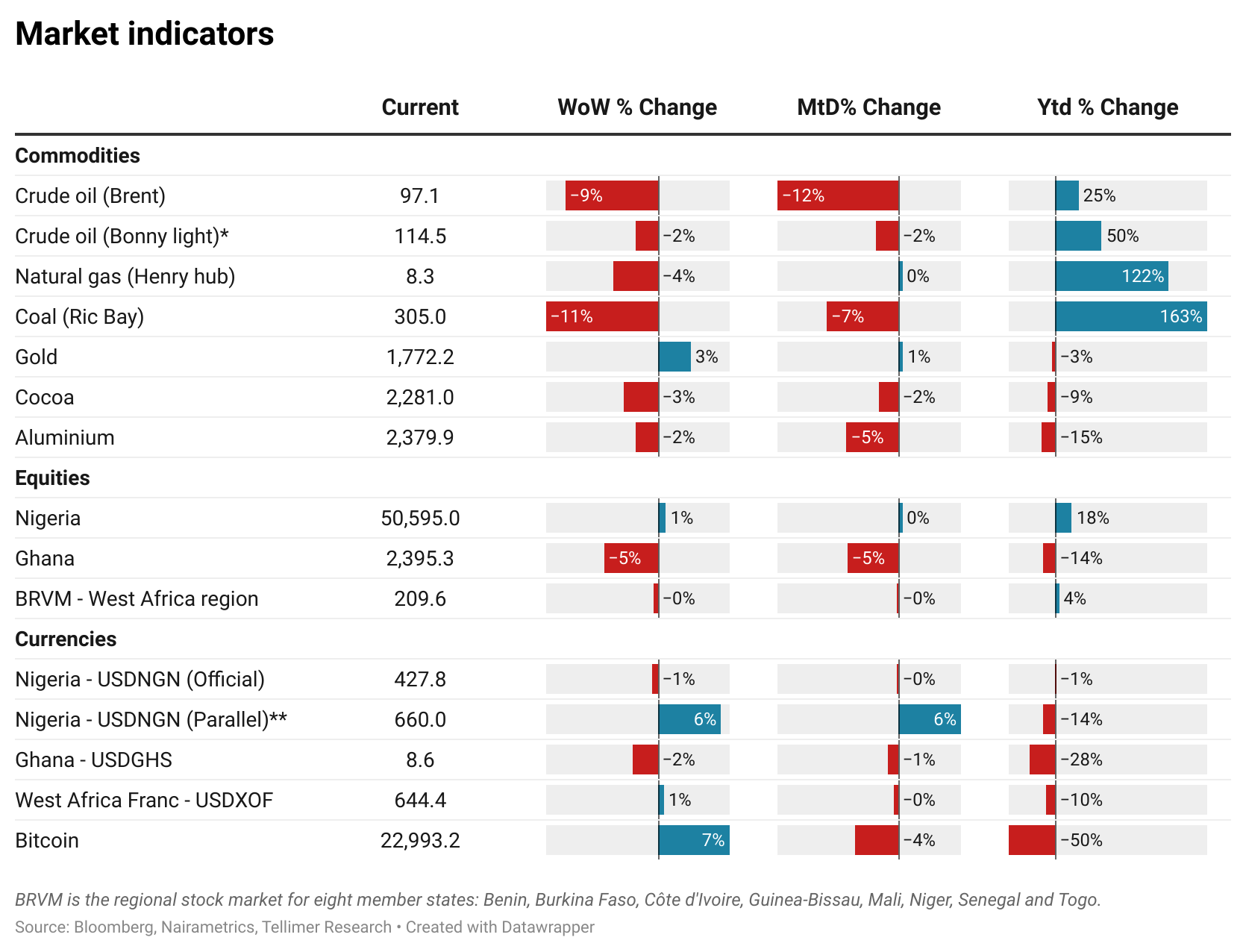 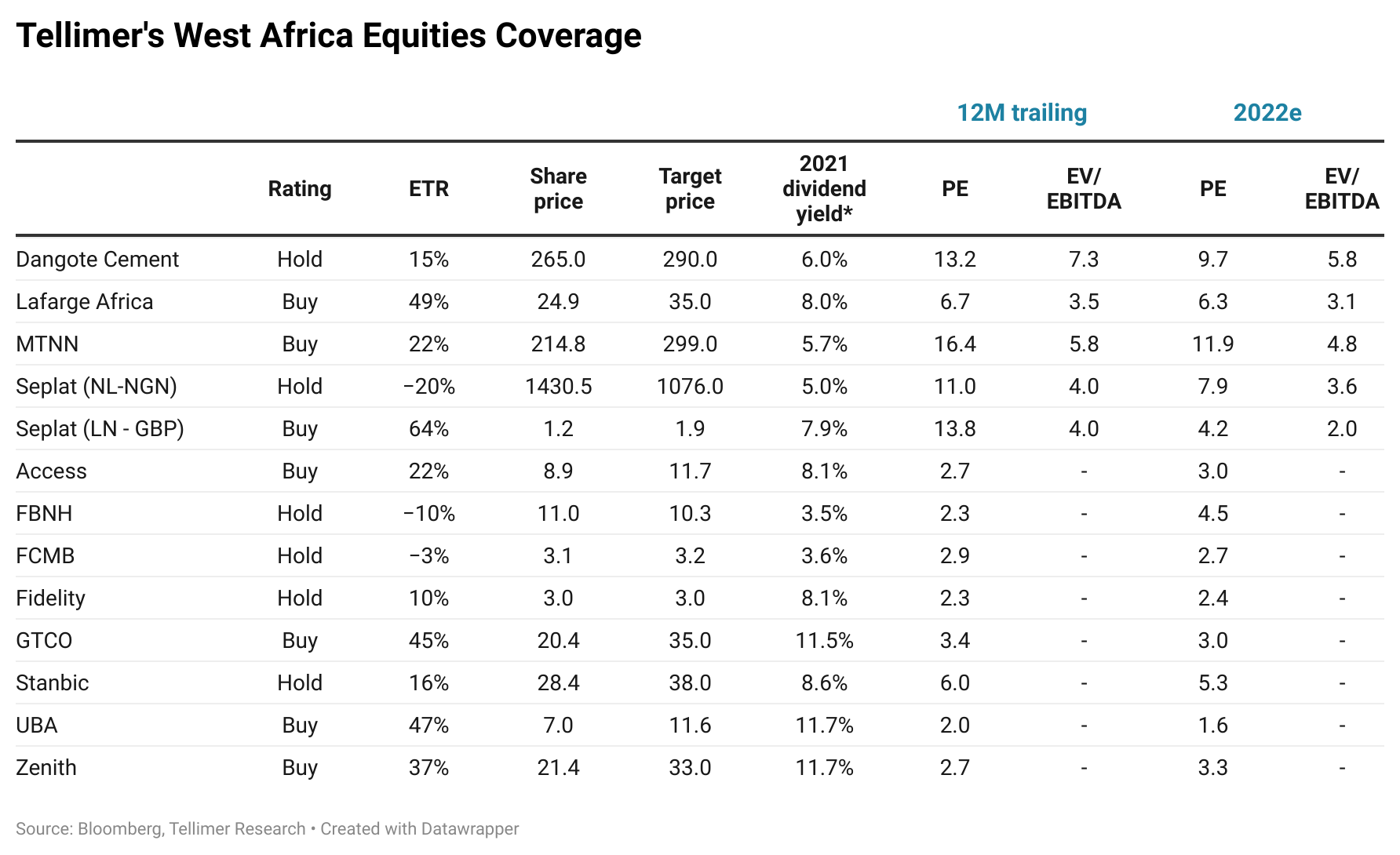 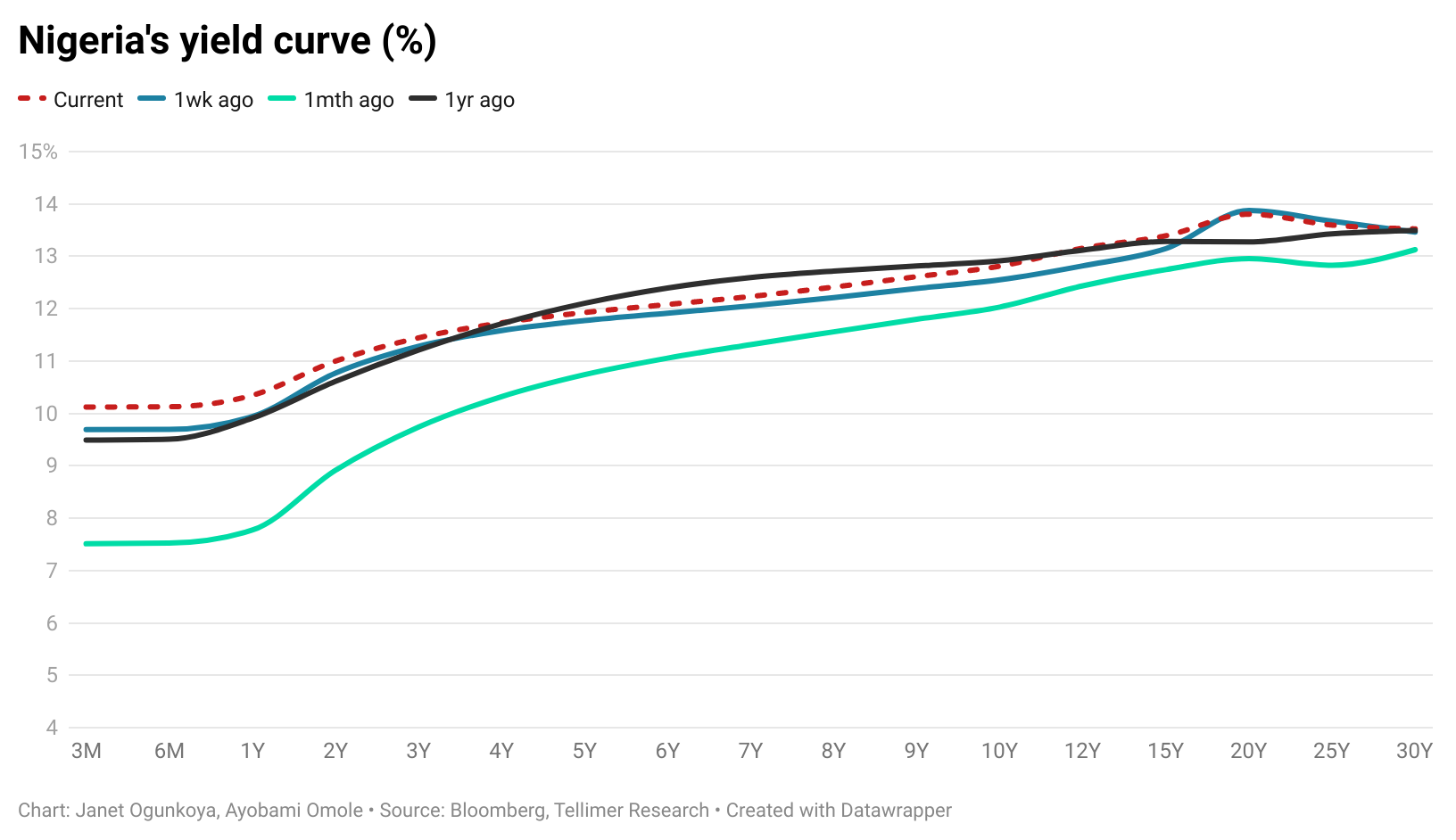 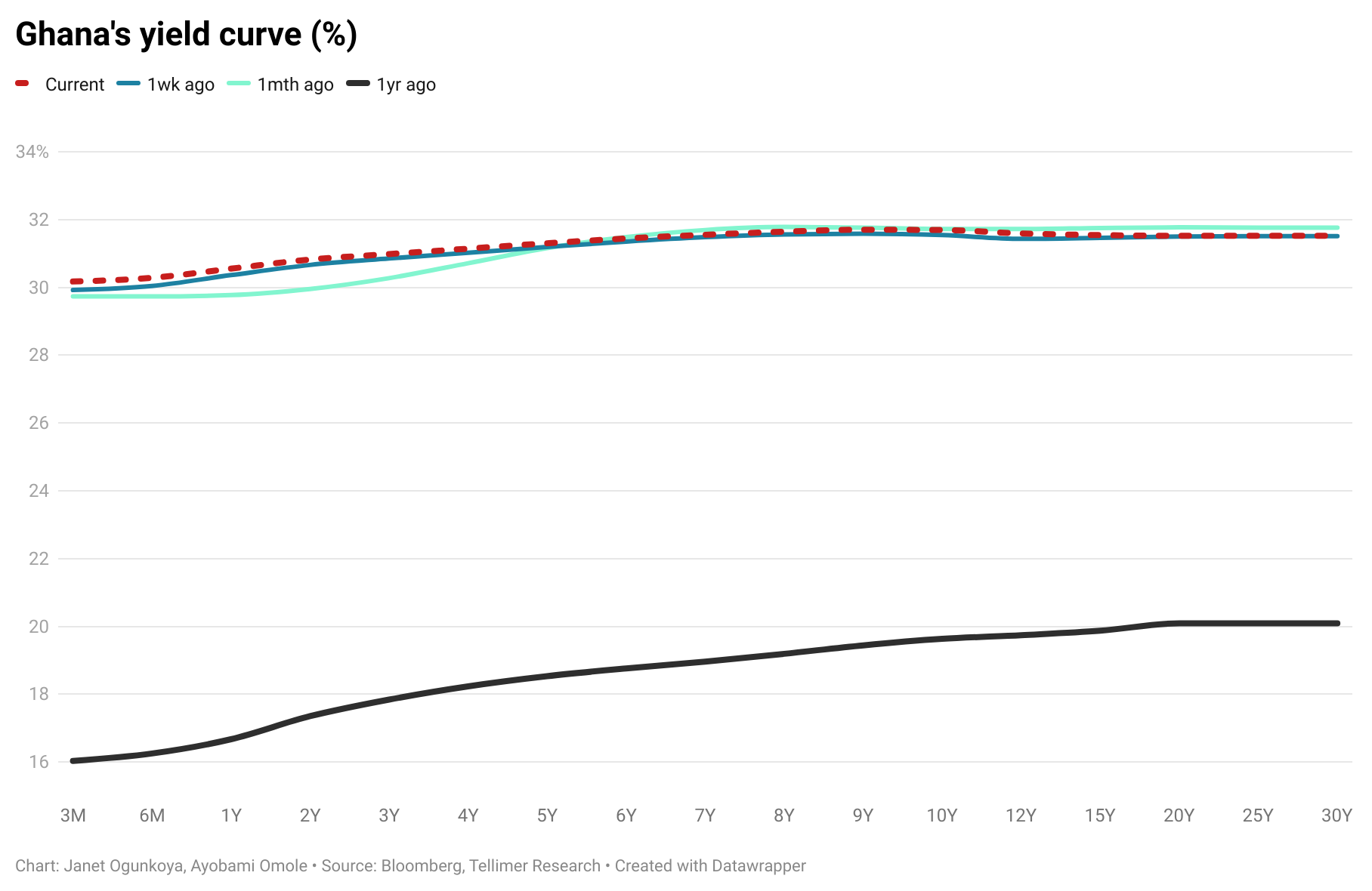