Yesterday saw the USD consolidate its recent losses, and from the trading behaviour, it appears that there was very little in the way of response to Fed Vice Chair Brainard’s comments. While she acknowledged that the Fed had done a lot, she indicated that it remained committed to reducing inflation, adding that it may soon be appropriate to slow the pace of tightening. These comments changed very little, given the market reaction to last week’s US inflation data. If anything, they confirmed that the pivot was on and that the Fed would likely slow the pace of tightening at the next meeting.

Investors are already positioned for rate cuts through 2023 and 2024, a clear sign that the cycle has changed and that the Fed’s policy will shift. For the USD, this only entrenches the belief that it is more likely to weaken through the months ahead. If US economic data continues to deteriorate, that becomes even more likely. The EUR continues consolidating its recent gains above 1.0300, while the GBP is consolidating above 1.1750. The JPY does appear to have shifted onto the back foot following the latest Q3 GDP data that disappointed.

Chad: The International Monetary Fund has welcomed a deal reached by Chad's creditors and said it would reduce the risk of debt distress and protect the country against downside risks, including lower oil prices. According to IMF Managing Director Kristalina Georgieva, the debt treatment agreed by the creditors was consistent with the objectives of Chad's IMF-supported program and should pave the way for the completion of the first and second reviews that would enable disbursement of IMF funds.

Kenya: To bolster its defence against climate change, Kenya is seeking financing from the International Monetary Fund. According to the lender's resident representative Tobias Rasmussen, the funds will be drawn from the Resilience and Sustainability Trust, which has been piloted in three countries, namely Barbados, Costa Rica, and Rwanda. The resident representative stopped short of disclosing the amount saying that "at this point, it is too early to say when the process could be completed or put a number on the amount of financing that could be provided."

Kenya: Proposals to set the debt limit to a ratio of GDP and empower Kenya's public debt management office to take charge of the country's obligations by the end of October have been postponed to a later date. According to Tobias Rasmussen, the International Monetary Fund's resident representative, "the legislative amendments to harmonize the definition of public debt and replace the nominal debt with a limit anchor would need to be resubmitted to the newly seated parliament."

Uganda: Local reports citing a notice by Finance Minister Matia Kasaija indicate that Uganda is seeking EUR 500mn in additional loans for the budget gap. Uganda has asked interested private-sector lenders to decide the rate at which they will lend to the government, and the funds will be used to finance the budget in the year through June. Lenders are to use all available financing options except Eurobonds. Moreover, creditors should disburse the funds at once with no charge on loan arrangement, structuring, legal, agency, and commitment levies. Meanwhile, Uganda will repay the loan in ten years, with servicing to start in the fourth year. The news follows parliamentary approval this month for the government to borrow $464mn in syndicated loans being arranged by Standard Chartered. The proposed borrowing is likely to stoke fresh concern over Uganda's ability to repay its rapidly expanding debt.

Zambia: The US ambassador to Zambia has called on creditors to accept debt write-offs for the country. In an interview, the ambassador said, "Every single one of the creditors needs to reduce the capital, the principal that is owed. Not just restructure so that the Zambian people keep paying longer and more into perpetuity, but taking what we call a haircut. While the ambassador did not say which loans he was referring to, he criticized the non-disclosure agreements that govern some of them. Zambia is seeking to restructure $12.8bn of foreign loans and is in talks with a group of creditors ranging from Chinese state-owned banks to bondholders. The Finance Ministry has said creditors needed to take a 49% cut in present value terms.

Zimbabwe: The Reserve Bank of Zimbabwe reported that Zimbabwe's remittances for the first ten months of 2022 jumped by 18% to $1.35bn from $1.15bn in the corresponding period last year. The jump in remittances is a positive for Zimbabwe, given they are an important source of foreign exchange income. Remittances were Zimbabwe's second-biggest source of foreign currency last year, with receipts rising to $1.4bn from $1bn in 2020.

The Central Bank of Egypt (CBE) devalued its currency recently and announced a move to a more flexible exchange rate system, measures that are likely to help unwind external imbalances, boost its competitiveness and attract foreign direct investment. A key question has, however, been whether authorities will allow greater flexibility in the exchange or, like in 2016, merely re-peg the currency to a weaker dollar. Recall the 2016 devaluation restored the competitiveness of the pound and improved the trade balance. But the subsequent re-pegging undid these gains. 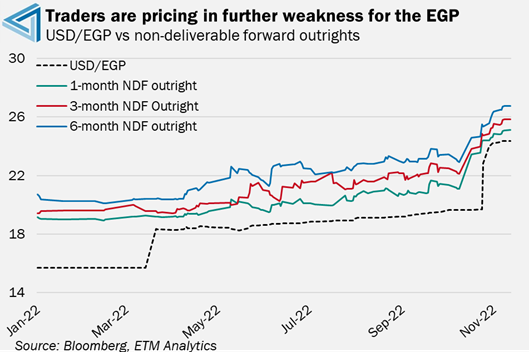 While the pound was relatively unchanged at a record low yesterday, it has weakened by more than 23% since the CBE announced the devaluation. Judging by the currency derivatives market, it is evident that traders are pricing in more pound weakness in the coming months. In the non-deliverable forward market, the 1-month, 3-month, and 6-month tenors have continued to trend higher and are at record-high levels. At yesterday’s close, the 3- and 6-month tenors are pricing in depreciation of around 6% and 10%, respectively.

Going forward, it remains to be seen how flexible Egypt’s exchange rate system will be. However, what is evident is that more currency flexibility is needed to help reduce the funding gap, and Egypt needs to rely more on stable funding sources than portfolio investments. These interest-rate-seeking flows can exit in a hurry, leaving the country exposed.

The bullish bias in Kenyan Eurobonds remained entrenched on Monday as positive developments on the fiscal front continued to bolster investor sentiment towards the country. For context, Kenya’s 5-year Eurobond yield shed 33bps to close the session at 9.86%, a level last seen in May. The longer-dated 10-year Eurobond yield meanwhile fell by 29ps to close Monday’s session at 10.60%. The drop in Kenyan Eurobond yields was partly driven by reports that Kenya is in talks with the World Bank for budget support as the government shifts away from costly domestic debt to cheaper concessional loans. 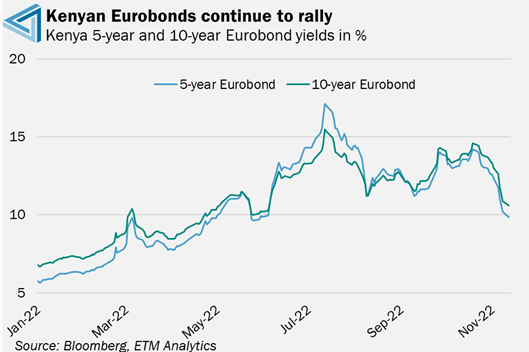 While details surrounding the budget support remain sparse, the reports come on the back of numerous signs of fiscal constraint from the Ruto administration. Recall that President Ruto last month said that his government is re-evaluating the national budget to reduce the country’s ballooning debt pile. IMF data shows that Kenya’s debt-to-GDP ratio has risen from 37.6% in 2012 to 67.8% and is expected to reach more than a two-decade high of 69.38% this year. The sharp rise in debt is a function of the debt-fuelled infrastructure program rolled out by former president Kenyatta.

Kenya’s debt-to-GDP ratio is well above the recommended ceiling of 50% set by the East African Community. The explosion in debt over the past decade has driven the annual debt servicing cost to nearly 54% of domestic revenues, a level that is unsustainable. Global shocks such as the Covid-19 pandemic, the knock-on effects of Russia’s invasion of Ukraine, and the sharp rise in global interest rates have compounded the fiscal degradation. While fiscal risks in Kenya remain skewed firmly to the upside, the expected pivot in global monetary policy and the signs of fiscal constraint under the Ruto administration are helping to ease fiscal fears, prompting a recovery in Kenyan Eurobonds.

COP27, the United Nations Climate Change Conference, has presented the opportunity to highlight the need to address climate change on the continent and tap Africa’s economic potential. While many African governments have rolled out initiatives to address climate impacts and build resilience, the challenges are huge, and there is a lack of financial support. This is evident in the accompanying chart. 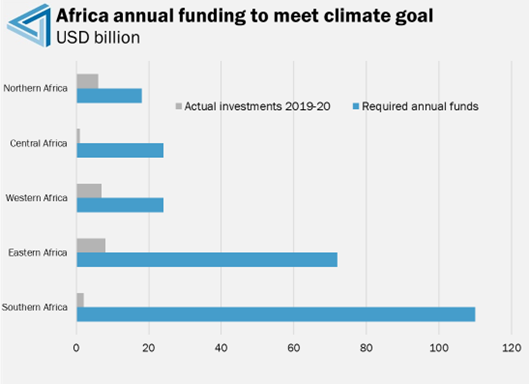 One of the major outcomes of the ongoing climate conference has been the urgent need to fill the gap of climate finance in developing countries, as global warming has continued to worsen. A G7 plan – called Global Shield – is expected to be announced at COP27 for funnelling emergency climate funding to developing countries.

Innovative ideas being pursued at COP27 include:

We will continue to keep a close eye on further developments from COP27. So far it has been highlighted that over the last few years, investments to mitigate climate change in developing countries have not been nearly enough. Going forward, to prevent further devastation due to climate change, investments and innovative strategies to mitigate emissions are essential.