Oil prices rallied for a third straight session yesterday but are on the defensive this morning as the focus is shifting back towards the weaker growth narrative. The front-month Brent contract is trading just above $117 per barrel this morning, while WTI futures are trading near $111 per barrel. Interestingly, reports have emerged that corporates across the globe have ramped up their hedging activity against another possible surge in oil prices. Several traders and brokers are reporting the busiest spell of hedging activity they have seen in several years. This suggests that corporates are anticipating another surge in oil prices, while it may also explain some of the gains we have seen recently in the market that have come despite a relatively worrisome growth outlook. As we have noted before, this weakening growth outlook is against a backdrop of still very tight supply for crude, which has been exacerbated recently by disruptions in Libya and Ecuador. US data released yesterday from the API also showed another major draw in stockpiles at the key Cushing storage hub, while OPEC+ members will rubberstamp only another modest supply increase for August. Therefore, the supply situation suggests that oil prices are set to remain supported over the near term, as evidenced by timespreads across the futures curve, which are widening further out in backwardation.

Egypt: Finance Minister Mohammed Maait has said that Egypt should shift its efforts towards boosting foreign direct investment than relying on purchases of treasuries to finance its budget. The Finance Minister said, “The lesson we have learned is that you cannot depend on this type of investment. It is coming just to get high yields, and once there is a shock, it leaves the country. We have to depend on FDI. We have to depend on improving our environment.” The onset of the war in Ukraine triggered outflows of around $20bn in Egypt this year. Previously, the 2018 EM crisis had resulted in outflows of around $15bn and the outbreak of the coronavirus pandemic in 2020 close to $20bn. Egypt has long had one the best real rates globally and therefore attracted significant inflows, but a surge in inflation has turned real rates negative, sparking portfolio outflows. Egypt will likely struggle to finance a projected $30bn budget deficit for the financial year starting next month amid tighter global financial conditions, a weak currency and investor caution. Maait has indicated that Egypt will look to alternative sources of funding such as concessional borrowing from international banks. Non-traditional funding such as the Samurai bonds sold in March could also be considered.

Kenya: In the latest push by the government to lower pump prices that are at a record high, state-owned National Oil Corporation of Kenya (NOCK) will, from August, start shipping from Saudi Arabia at lower prices than the global rates. This will be through a government-to-government deal that will see state-owned Saudi Aramco supply NOCK with refined fuel at “exclusively” lower prices than the global costs of crude. Under the deal, NOCK will import around 30% of the country’s monthly petroleum requirements for the next two months in a trial phase, according to an official. The move by the government is likely to bring down pump prices, ease the burden on consumers, and reduce some of the inflationary pressure that has driven the inflation rate to near the upper band of the central bank’s 5% +/-2.5 percentage points target range.

Botswana: As part of an effort to build its strategic oil reserves as a buffer against declining refinery capacity in South Africa, Botswana will start using storage facilities at Mozambican and Namibian ports next month. The Botswana government maintains strategic reserves as a cushion for emergencies, which have occurred in the past when supply protests along supply routes have disrupted stock from South Africa. South Africa's refinery capacity has faced several challenges, such as unplanned closures. According to an official from state-owned Botswana Oil, "the loss of refinery capacity from South Africa is the main reason behind these developments. We are also catering for possible shortages, which we expect due to the loss of supply from Russia."

Nigeria: Despite the Nigerian government spending billions of dollars subsidizing gasoline to curb prices and temper public discontent over the high cost of living, transportation costs continue to rise. Data from the Nigerian Bureau of Statistics showed that the average cost of an intra-city bus journey increased 46% to NGN582 ($1.39) a trip in May compared with a year earlier and flight tickets soared 53% over the same period to NGN55,907. Transport costs have surged despite Nigeria spending NGN1.49trn subsidizing gasoline in the first four months of this year to keep pump prices among the lowest globally. The surge in transportation costs is set to keep inflationary pressure in Nigeria buoyed in the near term.

Uganda: The Petroleum Authority of Uganda has forecast Uganda's oil industry to attract between $3.5bn and $4.5bn in investment next year. That would be up from an expected $3bn this year and in 2024. According to the energy minister, Uganda plans to start pumping crude from the ground by June 2025, and oil output will spur GDP growth to 9-10% in the peak year of production above 7% if oil is discounted. Note that TotalEnergies is leading the development of Uganda's oil fields as well as a crude-export pipeline.

As Q2 draws closer to an end, it is worth taking stock of the performance of the Southern Africa FX complex. With the exception of the Zambian kwacha, currencies in the region have broadly weakened against the USD on a quarter-to-date basis. For context, the Mozambican metical (-0.18%), Botswana pula (-6.64%), and South African rand (-8.94%) have all recorded losses. A combination of external and idiosyncratic developments has weighed on these currencies. Externally, lockdowns in China, high input prices, supply-side bottlenecks, demand-side inflation, tightening US monetary policy, and its impact on global growth and a stronger dollar, which has gained almost 7% on a QTD basis, have pressured currencies in the region. 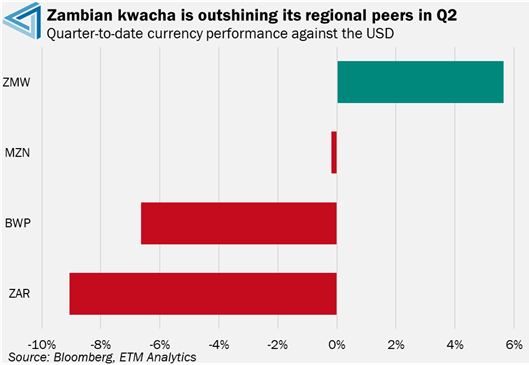 The rand and pula have notably underperformed. External developments have significantly affected the former, while load shedding, floods and port blockages have added downside pressure. However, it is worth flagging that our in-house sentiment indicator is pointing to a strong rand performance through H2 2022 that should offer importers another opportunity to lock in more attractive forward rates. The rand still remains attractive on a carry basis and is undervalued against the USD and EUR, while a weak economic backdrop suggests current account surpluses will remain in the near term. The metical, meanwhile, has recorded modest losses with renewed militant attacks in the northern region denting sentiment. While the metical has come under pressure recently, we see support for the currency emanating from positive policy reform, prudent fiscal policy, and management from the government in the medium term. In addition, capital inflows into the LNG sector will provide a massive boost to the country's fiscus and should support Mozambique’s terms of trade over the long term.

Meanwhile, the kwacha has not only outperformed its regional peers but has been Africa's best-performing currency in the period under review. Positive sentiment amid rising investor confidence in the economy and some support from the central bank through interventions and credit talks have provided tailwinds to the currency. Going forward, whether the kwacha can meaningfully appreciate further in the coming months will hinge on how soon debt restructuring can occur. Striking a deal with all of Zambia's creditors, chief among them China, could take longer, raising the risk of further delay from the anticipated timelines on which a deal with the IMF rests.

Understanding liquidity dynamics is critical when investing in African bonds. While it is relatively easy to invest in sovereign bonds, which offer investors some of the best yields in the world, exiting these positions can often be tricky due to liquidity constraints. Therefore, it is important to have a strong grasp of how large, developed and liquid an African country’s bond market is before investing. 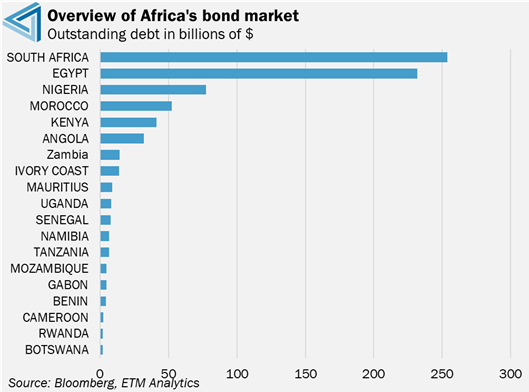 The accompanying chart provides an overview of the size of African bond markets in terms of outstanding debt. According to the latest data from Bloomberg, South Africa has the largest bond market in Africa at $254bn, followed by Egypt at $232bn and Nigeria at $77bn. The Bloomberg data shows that the three largest bond markets, namely South Africa, Egypt and Nigeria, make up more than 70% of total outstanding bonds in Africa.

It is therefore clear that these three are the most liquid bond markets in Africa. That said, there is a lot of value to be found in investing in African countries other than the ‘big 3’ with some of the highest yields in the world on offer. While fast money investors may find it difficult to invest in some of the smaller African bond markets due to liquidity constraints, there is a lot of alpha on offer for money managers willing to hold these bonds through to maturity.

For some African countries, fiscal deterioration pre-dates the pandemic. However, fiscal dynamics have deteriorated even further due to rising energy and food prices as a result of the Russia-Ukraine war, as higher prices are weighing on growth and are increasing inflationary pressures. Challenging economic conditions within these countries will likely make it difficult for policymakers to improve fiscal positions without implementing a combination of tax increases and spending cuts which could aggravate already high social risks. 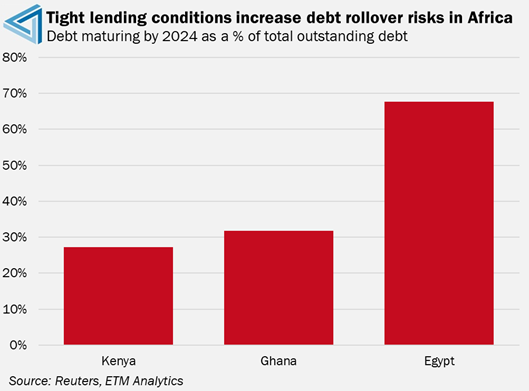 A maturity crisis is approaching, as maturities on international bonds issued in the previous decade will peak in 2024. Maturing debt is expected to remain elevated in the subsequent years. This, together with the deterioration in global lending conditions, is likely to intensify rollover risks in many African sovereigns over the next decade. A study conducted by global rating agency Moody's found that countries such as Ghana, Tunisia, Kenya, and Egypt are amongst the most vulnerable to running into debt rollover issues in the coming years. These countries are expected to start facing difficulties in securing market-based financing and are vulnerable to a rise in borrowing costs that could trigger a credit event.

The only African countries that have actually been able to issue international bonds in 2022 are South Africa, Angola and Nigeria. Kenya meanwhile has decided to postpone planned debt issuance in response to rising yields. Given the marked deterioration in lending conditions in the Eurobond market, Kenya and Ghana have to consider alternative sources of financing. These sources could include concessional loans, multilateral loans, and potentially raising local currency debt issuance.

Going forward, it is essential that these countries start to improve their fiscal policies in order to restore investor confidence and increase funding options. However, there is a considerable risk that if these countries fail to go down the path of debt consolidation, their debt will continue to rise, resulting in a high chance of them experiencing a fiscal crisis.