African sovereigns have slid down the credit rating ranks

Ahead of this week’s main event of the US mid-term elections, the USD is firmly on the defensive. Judging by the polls, the Democrats have lost the House, while the Senate remains evenly balanced. The prospect exists of a hung Congress where Republicans dominate the House, but Democrats retain control of the Senate, but the tide has certainly turned away from the Democrats amid the cost-of-living crisis and deteriorating economic prospects. President Biden could be rendered a lame-duck, implying that getting anything done in the US might be difficult for the next two years. Add to that research from the San Francisco Fed that US monetary policy is tighter than the benchmark rate, and sentiment has turned against the USD.

Most of the majors have made back ground against the USD, with the EUR trading back above parity and the GBP recovering back to 1.1500/dlr. Even the JPY has consolidated its recent gains to round off a tough start to the week for the USD. All eyes now turn to the outcome of the US mid-term elections for further direction.

Oil futures had a fairly volatile session yesterday but ultimately ended the day largely unchanged. Brent front-month contracts reached a high of $99.56 per barrel in intraday trade, before paring those gains to close flat yesterday at just below $98 per barrel. Providing support to the market was a weaker USD, coupled with continued concerns over tight supply in the months ahead as OPEC+ cuts output and Europe implements sanctions on Russian crude.

Southern Africa: President Samia Hassan is expected to present an $18bn plan to build renewable power generation in Southern Africa talks in Egypt as leaders from around the continent seek to increase climate finance in the region. Under the plan, a bloc of 12 countries in the region would increase generation by about 8.4 gigawatts from sources such as solar and wind. Hassan is scheduled to host a meeting of the nation's leaders and financial institutions on Tuesday at the COP27 climate summit in Egypt. The move may help Hassan spur developed countries, who have been asking African economies to focus on renewable energy instead of fossil fuels, to back up their call with financing.

Ethiopia: Disarmament talks between Ethiopian officials and representatives of the dissident Tigray People’s Liberation Front reportedly began in Kenya yesterday. The talks between top military leaders from both sides come on the back of a cease-fire agreement last week that called for negotiations within five days on the modalities of the TPLF combatants laying down their weapons. The talks will further underpin expectations that an end to the two-year conflict may be in sight.

Botswana: Botswana has won its bid to host the permanent secretariat of the Kimberly Process (KP), the grouping that certifies that diamonds are not used to fund rebel groups. In a statement yesterday, KP, a coalition of governments, the diamond industry, and civil society representatives, said it had unanimously elected Botswana to host the secretariat, which is expected to become operational in 2024. Note that the 85-nation body was established in 2003 to eliminate trade in conflict diamonds.

Nigeria: Due to increased efforts to combat theft by the Nigerian government and NNPC LTD since August, Nigeria has seen an improvement in the availability of some oil pipelines. Rampant pipeline theft had dragged oil production below 1mn barrels per day (bpd) that month for the first time since the 1980s and had a knock-on effect on gas availability, as the bulk of Nigeria’s gas comes as a byproduct of oil output. According to an official from the NLNG, “we have begun to see improvement in the availability of key crude oil transportation trunklines. If this trend is sustained, we expect it will support improved gas supply to NLNG once currently flooded oil and gas infrastructures become accessible.” In August, the government and the NNPC launched coordinated efforts to combat theft, including by hiring ex-militants to protect pipelines.

Tanzania: To pave the way for a planned $40bn liquified natural gas export project, Tanzania next month will sign key agreements with oil majors, including Equinor ASA and Shell Plc. Speaking at the COP 27 international climate, Tanzania’s Energy Minister was quoted as saying, “In December, we will conclude the conversation. We are in the fiscal package discussions now.” The project, which has been delayed by years of prolonged negotiations, has gained urgency as European countries look for liquified natural gas projects that can be long-term replacements for energy supplies from Russia.

Forex: Naira's weakness in the parallel market places it amongst the worst-performing currencies

While the Nigeria naira has come under pressure against the USD in both the official and parallel markets, the losses have been more pronounced in the latter. In the official market, where the exchange rate is controlled by the central bank, the naira has shed over 4.0% against the USD on a year-to-date basis. Meanwhile, in the parallel market, the naira has lost over 37% and repeatedly plunged to record lows this year. This has made it one of the world's worst-performing currencies after the Ghanaian cedi and Sri Lankan rupee, according to Bloomberg data tracking 148 currencies. 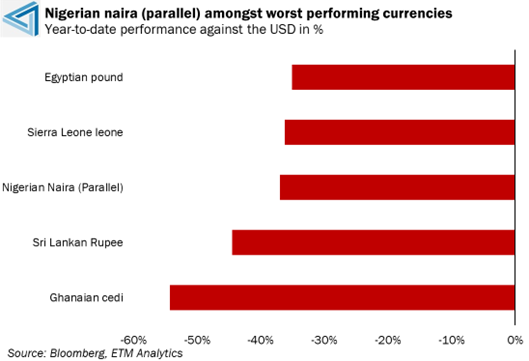 The naira's drop in the parallel market has been more pronounced in recent sessions after the central bank last week announced that it will issue redesigned 200, 500, and 1,000 naira notes from mid-December in a bid to mop up excess cash in circulation. The policy announcement has spurred dollar demand and purchases on the parallel market. With dollar demand continuing to outpace supply amid low oil revenues and rising outflows associated with the presidential elections next year, the naira sell-off is likely to persist in the near term.

While the ratings of African sovereigns by major credit rating agencies such as Fitch, Moody’s and S&P have enabled African countries to raise over $300bn over the past couple of decades, African issuers face a number of structural headwinds. Factors such as liquidity constraints mean that investors demand an increased “liquidity premia” for holding African bonds, which significantly raises the cost of raising funding for African countries. Therefore, improving the liquidity within the African bond market would go a long way in lower debt servicing costs across the continent. 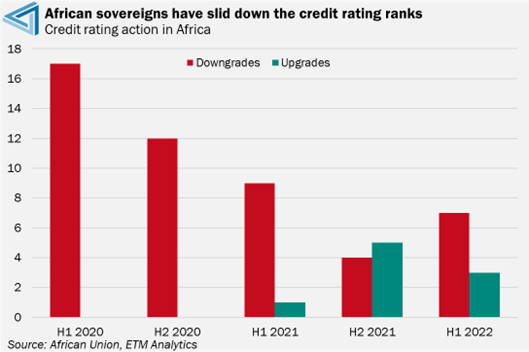 In a bid to lower debt servicing costs for African nations, the  UN Economic Commission for Africa has proposed a Liquidity Support Facility to reduce risk. Meanwhile, the African Union has proposed an African rating agency to provide alternative ratings. As it stands, a number of African sovereigns have effectively lost access to the international debt market due to their low credit ratings from the major agencies. We have recently seen the establishment of the Sovereign Africa Ratings. The agency recently assigned a BBB rating to South Africa, which is above that of the ratings given by the big three agencies.

While an agency like Sovereign Africa Ratings will have to establish credibility amongst the international community, there is a need for an Africa-focused rating agency for investors who concentrate on Africa and seek only relative risk assessment across African markets. Should agencies like this gain more credibility against the backdrop of improved liquidity conditions across the continent would help lower debt costs and potentially restore access to capital markets for those countries that have lost access during the pandemic era.

Given that it has been one of the main drivers of inflation this year, it is important to keep a close eye on global food prices. The FAO Food Price Index, which is widely used as a proxy for international food prices, was little changed in October. An upturn in the Cereal Price Index countered drops in the indices for vegetable oils, dairy, meat and sugar. 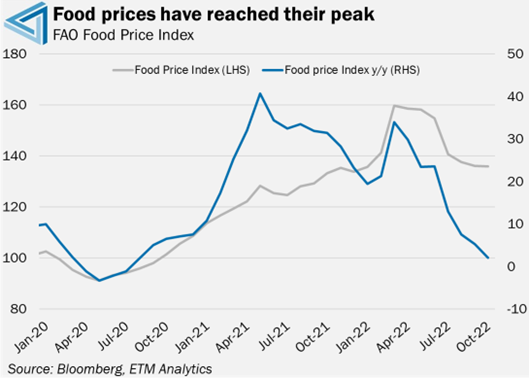 Grain prices have remained elevated due to the uncertainty around the future of the grain corridor that has allowed for grains to be exported via the black sea. The agreement between Russia and Ukraine is due to expire on the 19th of November. In the coming weeks, we are likely to see quite a lot of volatility within the grain market until there is clarity on whether or not Russia will extend the deal.