Yesterday saw the US economy report back on Q1 GDP and the outcome was impressive, with growth of 6.4% annualised recorded vs expectations of 6.1%. Fiscal support was a leading driver of the strong performance leaving the economy just 0.9% off pre-covid economic activity levels. This rebound is stronger and sharper than anticipated with the full effects of the fiscal and monetary stimulus not yet in the data. Expectations are that H2 2021 will be an extremely strong half, characterised by robust growth, a modest rise in inflation and improvement in labour dynamics. Under these conditions, the Fed will take advantage and seek to taper its asset purchases, something that will likely be further exacerbated by the extended fiscal stimulus that the Biden administration still seeks to implement, with another $1.8trln package being proposed.

Although the USD has recovered marginally off its lows, the bias is overwhelmingly bearish for the USD with technicals highlighting how there is no obvious inflection point in the charts just yet. Some technical support will be found towards the 90.0 index level, but it is clear that investors do not believe that another fiscal stimulus package amid ongoing monetary stimulus will do the USD any favours. That said, momentum does appear to be slowing. On a mean reversion basis, the USD remains 5% overvalued and still has some room to moderate before it heads into undervalued territory. So even on a fundamental valuation assessment, the USD has room to depreciate further.

Botswana: Keeping abreast with COVID-19 developments, the Botswana healthcare system is overwhelmed by the increase in coronavirus infections. The Ministry of Health and Wellness was on the wires saying that “the effects of the pandemic has stretched its capacity to cope, especially with rising cases and limited resources.” In a bid to cope with this situation, the ministry is trying to manage all health facilities through patient bookings and decentralisation of some resources. Should the government fail to resolve this problem permanently, this could lead to the tightening of restrictions again.

Nigeria: Following the increase in the number of kidnappings in the country, the Central Bank of Nigeria issued a warning to its employees to take extra precautions. Nigeria is facing serious insecurity issues, which have led President Buhari to be heavily criticised for failing to deal with these issues. The warning comes after the country’s Security Service Department  released a document that revealed that criminals are planning to “infiltrate” the capital, Abuja and other major cities to abduct people “for ransom or as results of terrorism.” Recall that insecurity issues in the country are also responsible for rising food prices in the country.

Zimbabwe: Data from the Zimbabwe Revenue Authority (ZIMRA) showed that the country’s gross tax revenue collection climbed by 4.7% to z$90.6bn in Q1 from z$86.5bn the previous quarter. According to the vice board chairwoman of ZIMRA Josephine Matambo, the increase in revenue collected was underpinned by the improving economic environment due to exchange rate stability. The largest portion of the revenue collected came from companies and individual tax. Whether or not the revenue growth will be sustained remains to be seen given the adverse impact of the COVID-19 virus that continues to linger and increased job losses in the country.

Uganda: The Ugandan Finance Ministry is seeking permission from lawmakers to borrow $166mn and €200mn from the African Export-Import Bank and €200mn from Trade and Development to fund its budget for the year ending June. Like many African countries, the effects of the COVID-19 pandemic hurt the country’s revenue last year and increased government expenditure, leaving the country’s budget deficit to widen. The IMF forecasted Uganda’s budget deficit to widen to 9.0% in the FY2020/21. To plug the budget shortfall, the government has to borrow. However, this will push the country’s debt levels higher, piling pressure on the government’s fiscus.

Tanzania: Following negotiations stalling for more than a year, Tanzania is now expecting to conclude an agreement for a $30bn liquified natural gas (LNG) project within six months. The recent call by President Samia Saluhu Hassan to resume negotiations of the LNG project underscores the notion that progress is being made on this front. Managing Director of the Tanzania Petroleum Development Corp, James Matarigo, announced that the government’s negotiation team has already been formed ahead of the resumption of talks, adding that it will be preparing from next week to restart negotiations with investors. The implementation of this LNG project will be crucial for Tanzania as it brings with it a new revenue stream for the government, creates employment and unlocks economic growth in the broader industrial sector.

Forex: Bank of Botswana leaves rates unchanged for the second time this year

The Bank of Botswana’s Monetary Policy Committee voted in favour of leaving its benchmark interest rate unchanged at 3.75% yesterday. The central bank said however that inflation risks have intensified with the risks to the inflation outlook now assessed to be skewed to the upside. Policymakers flagged the rise in global commodity prices beyond current forecasts and additional fiscal stimulus as two key risks to the inflation outlook. Against this backdrop, the central bank raised its inflation forecast and now expects inflation to rise above the upper limit of its 3-6% inflation target in Q2 and is estimated to return within the target range in Q1 of 2022. 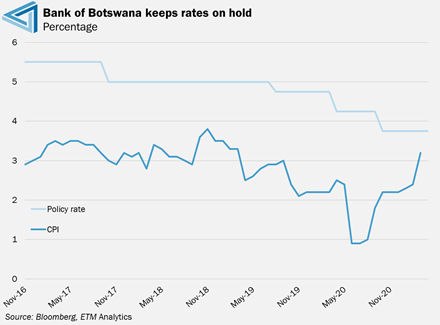 From a growth perspective, the central bank expects economic activity to rebound markedly this year. In line with the Ministry of Finance and Economic Development, economic growth is projected to rise to 8.8% in 2021, up from an initial projection of 7.7%.  Note that Botswana’s economy contracted by -7.9% in 2020. The growth outcome will largely depend on the successful vaccine rollout as it will enable the opening up of the economy. The central bank said that the economy is expected to operate below full capacity in both the short and medium term. Therefore, demand-side inflation pressures are expected to remain contained going forward.

Shifting attention to the FX market, the BWP-USD continues to trade in a tight range. Looking ahead, the decision by the Bank of Botswana to keep the policy rate on hold should continue to offer the BWP support. Heading into the final session of the week, given the lack of domestic releases, investors will look offshore for directional guidance.

US Treasury yields continued to climb on Thursday after signs of accelerating economic growth triggered fresh concerns that inflation will rise more rapidly than expected. Data published by the US Commerce Department showed that economic activity in the world’s largest economy rose by 6.4% in the first quarter of 2021, the strongest pace of growth since 2003. Details from the Q1 GDP report revealed that household spending kicked higher, boosted by the aggressive fiscal and monetary efforts. See the international section for more details.

On the back of the improved economic outlook, which helped bolster reflation bets, the yield on the benchmark 10yr US Treasury note rose by 3bps yesterday to 1.64%, its highest level in 2 weeks. The bias in US Treasury yields this year has been firmly to the upside with the benchmark 10yr yield climbing more than 70bps on a year-to-date basis as vaccine hopes and soaring commodity prices bolster reflation bets. European sovereign bond yields also traded higher yesterday, tracking the rise in US Treasuries. The 10yr German Bund notched 4bps higher to -0.19% on Thursday, its highest level since the onset of the pandemic in March last year.

While the recent rise in US Treasury yields has prompted a broad-based sell-off in European and emerging market bonds yields, the persistent rise in US Treasury yields and mounting global inflation concerns have had little impact on African Eurobonds. African Eurobond yields, for the most part, have traded in a consolidative manner this year when looking at the likes of Angola, Kenya, Nigeria and Rwanda. Ghanaian Eurobond yields have however traded higher this month as idiosyncratic risks intensify. Strong economic data out of Ghana has added to the topside impetus for its Eurobond yields this month. For context, Ghana’s 2023 Eurobond yield has risen by 85bps since the start of the month to sit at 4.10%. Going forward, we expect African Eurobond yields to remain anchored in the near term, supported by the strong appetite for yield against the backdrop of elevated concerns surrounding the pace of Africa’s economic recovery given the continents slow progress on the vaccine front. 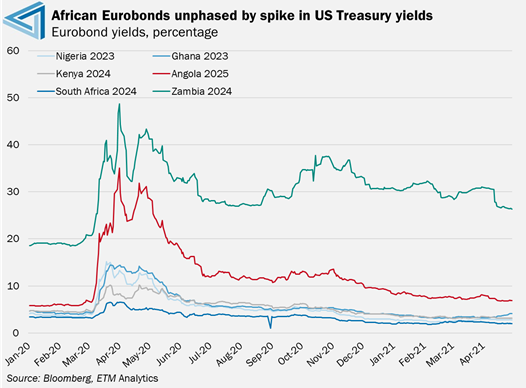 Macroeconomic: Headline inflation in Zambia edges lower in April, but remains a concern for policymakers

It was a heavy-laden day in terms of economic data out of Zambia yesterday. Data published by ZamStats on Thursday showed that headline inflation in Zambia slowed for the first time in 8 months in April, albeit the decline was marginal. Specifically, headline CPI came in at 22.7% y/y from 22.8% y/y in March.

A breakdown of the data shows that food inflation decelerated to 27.2% y/y from March’s record high of 27.8% y/y, while non-food inflation came in at 17.5% y/y from 17.0% y/y.  While inflation slowed in Zambia, it nevertheless remains elevated above the Bank of Zambia’s (BoZ) 6%-8% since April 2019, and upside risks exist in the coming months amid persistent Kwacha weakness and a worsening fiscal position.

For context, the Kwacha is down by over 5% on a YTD basis and is currently trading at record lows as demand for hard currency, driven by factors including debt servicing, continues to surpass supply. The BoZ is therefore expected to remain cautious in its approach to monetary policy at next month’s meeting.