African Eurobonds rally ahead of the much-anticipated US CPI print

The week's main event unfolds this afternoon with the release of the latest US inflation data. It could determine whether the Fed presses ahead with a more conservative 50bp rate hike or will stick with the outsized 75bp. The Fed has been in catch-up mode for several months now, and only a confirmed reversal of inflation will be enough to shift the Fed's narrative. That is why today's inflation reading is as important as it is. Any softer than expected reading could see the Fed soften its guidance to some degree. Given the contraction in M2 money supply, the rising interest rates and the more aggressive quantitative tightening that began at the start of this month, there is good reason to believe that inflation will reverse before the end of the year in a confirmed and sustained manner. The USD has retreated in anticipation. Whether that retreat is sustained will be decided by the inflation outcome. The EUR has clawed back more ground to trade above the 1.0100 mark, while the GBP is nudging back up to the 1.1700 level.

Ethiopia: Headline inflation in Ethiopia slowed further in August, coming in at 32.5% y/y from 33.5% y/y. On a m/m basis, inflation eased to 2.9% from 3.1% in July. The slowdown in inflation was primarily attributable to a slower rise in food prices. Food price inflation decelerated to 33.2% y/y from 35.5% y/y in July while non-food inflation rose to 31.5% y/y from 30.4% y/y. While inflation eased for the third straight month in August, it remains elevated, and upside risks exist amid a crippling drought and foreign currency shortages.

Kenya: Agricultural exports fell by 8% in the six months through June, mostly on lower quantities due to poor weather. Horticultural-export income dropped 40% y/y to KES 48.4bn, while cut flower export receipts wilted by about a third to KES 37.4bn. Fruit earnings more than halved to KES 5.63bn, while the value of vegetables sold overseas dropped 65% y/y to KES 5.43bn. On a positive note, black tea earnings rose by 17% y/y to KES 79.7bn, boosted by higher prices despite an 8% dip in shipments. Meanwhile, coffee earnings jumped 45% to KES 22.8bn. Given that agricultural exports are an important source of much-needed foreign exchange in Kenya, the overall drop in earnings is likely to compound its dollar shortages and weigh further on the Kenyan Shilling.

Ivory Coast: Ivory Coast has reportedly started selling cocoa contracts for the 2023/24 season at a non-negative premium for the first time in three years as the regulator seeks to support farmers. According to sources close to the matter, the country's regulator, the Coffee and Cocoa Council, sold 25k tonnes of cocoa export contracts to global commodities Cargill Inc on Friday. The Ivory Coast and Ghana impose two bounties on their beans that aim to increase the prices paid to poor farmers to boost their incomes. However, one premium, known as the Origin Differential, had fallen below zero in recent years under pressure from traders, negating part of another premium, the Living Income Differential (LID) of 400 dollars per tonne. In July, the two biggest cocoa producers in the world said they would no longer sell cocoa with a negative origin differential as they step up efforts to tackle farmer poverty. Ivory Coast raised its original differential to zero in August from -£125 per tonne previously.

Namibia: Namibia's first hydrogen power plant is expected to begin generating electricity by 2024, according to French independent power producer HDF Energy which owns the plant. When complete, the Swakopmund power project will cost 3.1bn Namibian dollars ($181.25mn) and will increase the country's ability to generate clean electricity all year round and lessen its dependency on countries such as South Africa, where 40% of Namibia's electricity comes from. Namibia intends to use its enormous solar and wind energy potential to manufacture green hydrogen and establish itself as an African powerhouse for renewable energy.

Rwanda: Central bank Governor John Rwangombwa said the 1.5ppts of rate hikes implemented so far this year should help to tame runaway inflation. Rwangombwa said, "We are committed to another hike if inflation remains stubborn. But as per our projections, we think the decisions taken already will help us to bring it into our range by next year barring any unusual event." The Governor forecasts the inflation rate to peak at around 16% y/y by the end of this year and then slow from January, eventually reaching the bank's medium-term target of 5% by H2 2023. Rwangombwa added, "Central bank decisions do not have an immediate impact on, for example, inflation, which is our objective. We expect that to have an impact over the next three quarters." Meanwhile, growth in Rwanda is forecast to slow to 6% this year from 10.9% in 2021.

It has been a stellar Q3 for the Zambian kwacha thus far. The kwacha has gained north of 8% against the USD and is Africa’s best-performing African currency on a quarter-to-date basis. The currency has gained on the back of improved dollar supply due to continued central bank intervention in the FX market, a recovery in foreign portfolio flows, and upbeat sentiment following the recent approval by the International Monetary Fund’s board of a $1.3bn support package for Zambia. 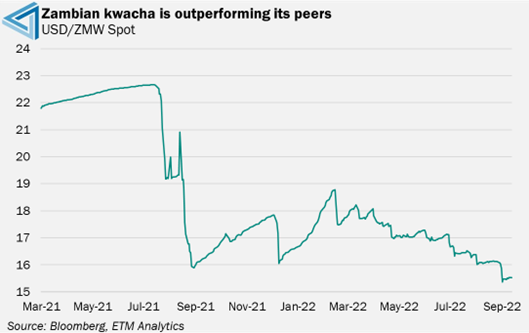 While the IMF deal has provided a tailwind to the kwacha bulls, there is a lot of work to be done for Zambia to restructure its debt. The government now plans to sign a memorandum of understanding with its official bilateral creditors’ committee by the end of the year. The government will then start negotiating bilateral agreements with the individual creditors within the parameters of the MoU. Simultaneously, the government intends to start talks with commercial creditors this month with the objective of reaching an agreement with the committee representing Eurobond investors by the end of the year. It is worth noting that the government’s timelines have so far been ambitious, and risks exist that the restructuring process may be prolonged.

For now, improved investor sentiment and continued offshore inflows suggest that the kwacha may remain supported and continue to outperform its African peers. However, the kwacha is significantly overvalued on a real effective exchange rate basis. This suggests that the room for significant gains, as seen post the elections last year, remains limited.

Fixed Income: African Eurobonds join in on the broad-based rally in risk assets

It was an upbeat start to the week for fixed-income markets. Tracking the broader bullish bias in core bonds, African Eurobonds rallied on Monday, with yields across the board closing the session lower. Underpinning the gains in African Eurobonds was the combination of bailout euphoria, the improvement in global risk appetite and the sharp pullback in the USD, which has prompted a rally in emerging and frontier market currencies. 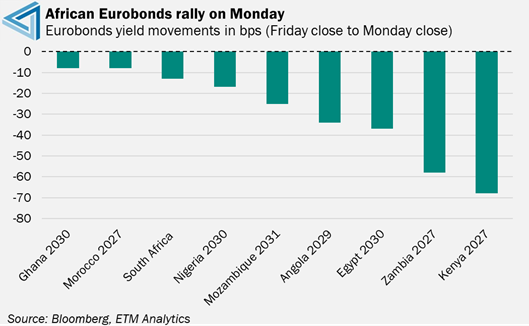 The Tanzanian government has announced new measures on grain trades to protect the sector and keep jobs from shifting abroad. Kenya, which is the region’s largest economy and grain importer, will be impacted the most as it relies heavily on cross-broader trading with Tanzania to meet its local demand. The new rules require grain traders seeking to export maize from Tanzania to register their companies in that country. 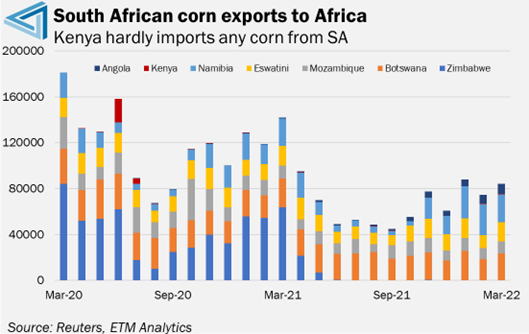 This new measure will greatly impact Kenya’s food security as Kenya is heavily dependent on Tanzania's grain exports to bridge its annual food deficit. Recent weather forecasts for the coming months suggest that the next rainy season in Kenya will again be inadequate, and expectations are that Kenya will require further food assistance.

Finally, Kenya has a longstanding policy against genetically modified maize, limiting trade with countries such as South Africa, a significant maize producer in Africa. This season the risks to Kenyan imports are going to be even higher as Tanzania wants to protect its own harvest. Therefore, Kenya needs to make some rather quick decisions regarding restrictions on genetically modified maize imports in order to try and prevent the current food crisis from getting worse.