US Treasuries fell to three-week lows yesterday, with the long-end underperforming following a weak 30-year auction. This helped steepen the curve and unwind some of the inversion that we have seen deepen this week. The front-end remained a bit more anchored following PPI data out of the US that was softer than expected. This followed the weak CPI data earlier this week and suggests that the macroeconomic environment may be starting to improve a little bit. Inflation is still high, and the Fed will still need to hike rates, but the situation is not as bad as many had feared. The market is now back to pricing in a higher probability of a 50bp hike in September over a 75bp increase.

We saw similar trading themes in Europe yesterday, with bund and gilt yields rising across the board and their curves steepening. UK bonds underperformed their German peers, with traders citing political risk as a factor given all the talk of a possible new BoE mandate. We should, however, note that the general bias for bond markets remains one of flattening of yield curves, and with economic uncertainty likely to remain quite elevated in the coming weeks, we could see this bias persist.

Notwithstanding the much stronger than expected US payroll data a week ago, the USD has steadily lost ground throughout the week, with the catalyst for a big sell-off coming in the form of the latest US inflation data. Although the sell-off has abated, it is clear that the risk to the USD remains to the downside. If such a strong payroll print was completely overshadowed by the softer inflation data, it offers confirmation that the USD is fully priced for rate hikes and that the risks are that the economy slows down faster than expected and moderates inflation to the point where the Fed scales back its tightening. Technically, the trade-weighted USD may be about to experience a deeper correction. Into the weekend, and the EUR has punched through 1.0310/dlr while the GBP is now trading just shy of 1.2200.

Uganda: The Bank of Uganda (BoU) will deliver its latest verdict on its interest rate today. In the previous two meetings, the BoU has hiked interest rates by 100bps, taking the benchmark interest rate to 8.50%. The BoU has communicated that it is committed to doing whatever it takes to try and restore inflation to the 5% target over the next two to three years, suggesting that risks for further policy tightening remain.

Namibia: Headline inflation in Namibia accelerated further in July, coming in at 6.80% y/y from 5.99% y/y in the month prior. The July reading marked the fastest pace of price growth in the economy since  March 2017. The transport and food components continued to be the main contributors to the annual inflation rate with a contribution of 3.0 and 1.5 percentage points, respectively. With inflation moving above the upper band of the central bank’s 3-6% inflation target in July and risks to the outlook tilted to the upside amid lingering supply disruptions, we could see policymakers consider further policy tightening at the next meeting.

Morocco: To support the purchasing power of citizens and mitigate inflation effects, the Moroccan government will more than double its allocation to subsidize basic food costs and energy products in FY2023 to MAD30bn ($2.9bn) from $1.7bn a year earlier, according to PM Aziz Akhanouch. The funds will be used to offset the negative consequences caused by a severe drought that has hit the agricultural sector this year and will be used to support the country’s tourism and logistic industries. Another key target of the higher funds next year is to avoid social unrest by improving income equality and territorial justice.

Rwanda: The central bank of Rwanda delivered its biggest interest hike in more than a decade yesterday as it sought to rein in runaway inflation. The Monetary Policy Committee (MPC) raised that key policy rate to 6% from 5% previously, taking the cumulative rate hikes for this year to 150bps. According to Governor John Rwangombwa, the MPC decided to hike to avoid second-round inflation effects and expect the increase, together with other measures from the government, to bring the rate of price growth back within the central bank’s target range of 2% to 8% in the second half of next year. The hike aligns Rwanda with regional peers such as South Africa and Egypt, which have increased rates by 100bp or more to combat surging price pressures.

Zimbabwe: To support the Zimbabwean dollar and combat surging inflation, the Reserve Bank of Zimbabwe is considering establishing a currency board. A member of the Monetary Policy Committee was quoted as saying, “The issue of the currency is being looked at. It has been done by 40 countries before, but it also requires a substantial amount of reserve money. It is being considered.” A currency board must, among other requirements, back all units of domestic currency in circulation with foreign currency. The MPC member added that Zimbabwe would require around $700mn to back the domestic money in circulation.

Egypt: As economic challenges mount, the Egyptian government is reportedly considering raising a loan of around $2.5bn. Reports quoting sources close to the matter indicate that the government is talking with regional and international banks about the financing details. Discussions are, however, preliminary and may not translate into a deal. According to the sources, the borrowing is expected to be priced at around 400bp over the three-month secured overnight financing rate. Egypt urgently requires more foreign currency as it seeks to plug widening deficits.

Oil producers: Oil is heading for its largest gain in four months, with Brent edging back above $99 per barrel and WTI trading around $94 per barrel, both up more than 5% on the week. While a weaker USD has provided some support to the market, supply issues have resurfaced, and expectations of fuel-switching buoying demand have grown. In the Gulf of Mexico, six oil fields have been shut after a halt at two major pipelines. It is expected that they will be reopened by today, but any further disruptions there could lead to some topside pressure in the market.

Kenya: The market reaction to the election has been positive, with the election process far smoother than many had expected. That said, Kenyan bonds were not alone, with Nigerian, Egyptian, Angolan, Zambian and South African bonds all firmer yesterday. Therefore, the solid performance of Kenyan bonds can be ascribed to both domestic and external dynamics. Rate traders across the globe continued to scale back on interest rate bets yesterday. This was evident when looking at the broader receiver bias across EM FRA and IRS markets.

The Zambian kwacha has had a stellar Q3 so far, with the currency outperforming its African peers. On a quarter-to-date basis, the kwacha has record gains of almost 4% against the dollar to rank as Africa’s best-performing currency. The kwacha gains are roughly ten times that of the South African rand during the period under review. 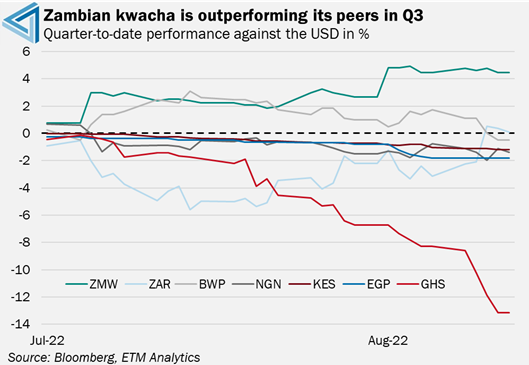 Aside from continued central bank intervention in the foreign exchange markets and higher foreign exchange inflows from the mines this quarter, the kwacha has been supported by improved investor sentiment. Sentiment has improved on the back of official creditors agreeing to provide financing assurances that the country needs to secure final approval from the International Fund (IMF) for a bailout of more than $1bn and debt restructuring talks that are set to commence next month. Ratings agencies such as Fitch have already noted that they see the assurances provided by Zambia’s Paris Club bilateral creditor committee as sufficient to unlock the first tranche of IMF funding in the coming months.

The near-term outlook for the kwacha remains favourable amid continued central bank support and positive sentiment as Zambia moves closer toward a debt restructuring. Room for significant gains, however, remains limited, with the kwacha significantly overvalued on a real effective exchange rate basis. In-house indicators point to the kwacha being overvalued by over 16%.

The hawkish pivot from central banks across the world, particularly the Federal Reserve, has come as a stern headwind for African sovereign bonds. Sovereign bond yields across the continent have surged as traders price in higher interest rates, with central banks hiking rates aggressively to rein in inflation and inflation expectations.

The tighter dollar liquidity conditions, deterioration in global risk appetite and rising borrowing costs have compounded fiscal pressures across the continent, with the fiscal positions of African countries already under severe pressure following the Covid-19 pandemic. 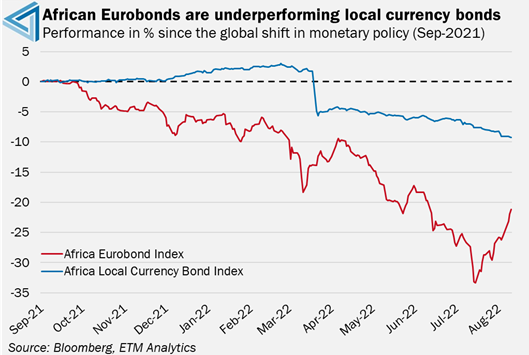 Interestingly, African Eurobonds have underperformed their local currency counterparts since the hawkish pivot in global monetary policy in September last year. Specifically, the African Eurobond Index is down more than 20% since September 2021, even after recouping more than 10% in losses over the past three weeks as traders readjust their bets for global interest rates on the back of rising growth concerns.

Local currency African bonds meanwhile have recorded losses of just under 10% over the same period. While local currency African bonds have been far more resilient to the deterioration in global market conditions, it must be noted that for foreign investors funding in hard currency, the currency leg must still be accounted for. For the most part, African currencies have depreciated against the USD over this period, with the likes of the Ghanaian cedi and the Egyptian pound down 33% and 18% over the period. Take the currency moves into account, and the story is starkly different.

Macroeconomic: Bond traders are pricing in a significant currency premium for Ghana and Egypt 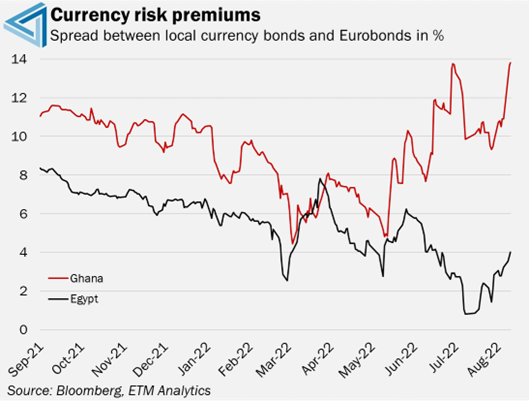 The accompanying chart shows that bond traders are pricing in a significant degree of currency risk for Ghana and Egypt. While the risk of another devaluation in the Egyptian pound is significant, the market is pricing more devaluation risk for the Ghanaian cedi. For context, Ghana’s currency premium sits at around 14% vs 4% for Egypt, which speaks of just how acute Ghana’s fiscal issues are at the moment. The loss of access to the Eurobond market is not only weighing on the country’s fiscal outlook but is impacting Ghana’s reserves, which have fallen to the lowest levels since 2019.

The wide currency premium for both Ghana and Egypt is accompanied by a marked premium in the 12-month non-deliverable forwards vs spot, which implies that the NDF market is also pricing in a significant devaluation in both currencies. While currency risks are acute for both currencies, following the deterioration in monetary policy with both countries running negative real negative interest rates against the backdrop of wide current account deficits, the Ghanaian cedi is now in undervalued territory. The Egyptian pound, on the other hand, is still buoyed in overvalued territory.