African Eurobonds are rebounding, US CPI to dictate market movements

US Treasury futures are marginally bid this morning after yields rose through the session yesterday and deepened the inversion of the curve, with the 2v10 spread at one point reaching -50bp in intraday trade. Traders remain focused on the inflation front and today’s reading could generate some volatility within the markets. While USTs may be vulnerable to an upside surprise in inflation, given all that is priced in, we see the risks skewed towards the downside for yields from today’s report, especially if there are any signs that core inflationary pressures are starting to cool. Currently, OIS rates signal around a two-thirds chance of a 75bp hike at the September meeting, highlighting how hawkish the market is despite the fact that we have seen growth concerns ramp up in recent sessions. Bunds, meanwhile, trimmed their losses yesterday as equity market declines in Europe drove a shift back towards havens. It seems that traders are, however, also increasing their bets on ECB rate hikes ahead of today’s CPI data from Germany and the US. Traders are now pricing in over 110bp worth of rate hikes before the end of the year, up from levels closer to 85bp seen last week.

Ghana: Reports quoting sources close to the matter suggest that Ghana is in talks with the International Monetary Fund (IMF) over a loan of around $3bn, double the amount it was considering a month ago, as it tries to shore up its finances and win back access to global markets. According to a spokeswoman for the IMF, “the Extended Credit Facility for low-income countries is the Fund’s main tool for medium-term support for countries facing protracted balance of payments problems, similar to Ghana’s. The duration of such an arrangement is between three to four years, and extendable to five years” and will ultimately be decided by the IMF’s Executive Board. Ghana began talks with the IMF last month, reversing a pledge by President Nana Akufo-Addo’s administration not to seek a financial program from the IMF.

Mozambique: President Filipe Nyusi announced fiscal measures to stimulate economic growth in Mozambique, including a plan to reduce the VAT rate to 16% from 17% to alleviate the high cost of living currently experienced by Mozambicans. The measures also include reducing the corporate tax rate for farming and urban transport operators to 10% from 32%. The government will allocate 10% of revenues from extractive industry operations to the province where they are based for infrastructure and development projects. Furthermore, the government will accelerate ten strategic infrastructure projects worth more than $1bn in multilateral investment, with emphasis on transport, financial inclusion, and government digitization. Mozambique also plans to have a sovereign wealth fund in place for when significant natural gas revenues start to flow. However, major inflows won't happen until after 2024.

Nigeria: To avoid a sharp deterioration in government finances next year and boost revenue, Nigeria's budget office has called on the government to cut the gasoline subsidies. According to the country's budget office, the budget deficit may rise to NGN 12.4trn ($29bn) next year, almost three times total revenue, or 5.5% of GDP, if the government continues paying fuel subsidies. The subsidies will cost NGN 6.72trn. Meanwhile, the budget shortfall would balloon from a projected NGN 7.35trn this year despite plans not to fund capital expenditure in 2033 if the subsidy remains. The budget office added that only 5.9% of project government revenue of NGN 6.34trn will come from oil in 2023 "as it will be eroded by the fuel subsidy," while the balance of funding will come from non-oil sources. Even in a situation in which the government does away with the subsidy by June, the budget deficit would still exceed 5% of GDP. The budget's office projections further bolster repeated calls by the International Monetary Fund and World Bank for Nigeria to remove the subsidy, which is forecast to cost the country at least $9.6bn this year.

Zambia: The African Export-Import Bank is set to invest $300mn for the second phase of a planned 1.5mn ton fertilizer plant. Different financiers undertook the first phase of the facility outside Lusaka. Zambia requires 800,000 tons annually, and the surplus from the plant will be exported to the region.

Egypt: To generate much-needed foreign currency income, Egypt is curbing some electricity use to free up for export of more of the natural gas that feeds its power plants. According to Prime Minister Mostafa Madbouly, lighting in streets, public squares, and larger sports facilities will all be reduced, and illuminations outside government buildings will be switched off after working hours. Egypt, which previously used 60% of its gas to generate electricity, has instead been using mazut, a heavy fuel oil, at some power plants since October. That’s helped build a gas surplus for export, generating $100-150mn per month, according to Madbouly. The belt-tightening is a sign of the lengths Egypt is going to earn more hard currency as it copes with the effects of the war in Ukraine.

Forex: Egypt’s net reserves plunge to a multi-year low, adding to the headwinds for the EGP

The latest data from the Central Bank of Egypt (CBE) showed that net international reserves declined further in July. Specifically, net international reserves came in at $33.14bn from $33.38bn in June. July marked the fourth straight month that reserves have dropped and the lowest level since June 2017, reflecting a growing strain on the country’s finances. Moreover, the July reading follows a cumulative drop of close to $4bn in May and June. 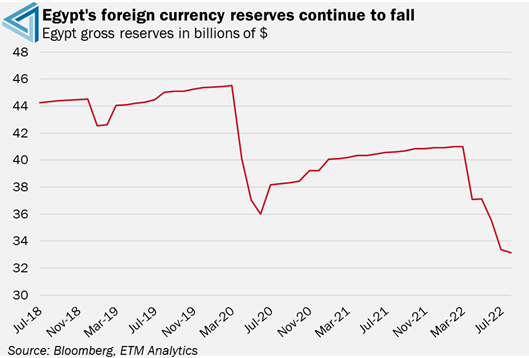 The continued fall in reserves underscores the vulnerability of Egypt and suggests that there has yet to be a reprieve from the economic fallout fall of the war in Ukraine. The war has led to a higher import bill for wheat and fuel and triggered foreign outflows to the tune of $20bn in the local debt market. Oil-rich Gulf countries have, however, pledged more than $22bn in deposits and investment support to the economy, while authorities in Cairo are in talks with the International Monetary Fund over a new loan.

With reserves continuing to fall and Egypt requiring more funds for imports and debt payments in the coming months, risks exist for another currency devaluation as a means to narrow the chronic current account deficit. Devaluation of the EGP, which remains notably overvalued on a real effective exchange rate basis, could reduce pricey imports and boost the competitiveness of exports. That said, policymakers may be wary about the side effects of devaluation, such as rising inflation, which is already in double-digit territory, and the risk of social unrest.

After coming under significant pressure in recent months, driven by the aggressive tightening by major central banks and the deterioration in risk appetite amid mounting global geopolitical tensions, African Eurobonds appear to be staging a recovery as traders reprice for global interest rates. After peaking in July, African Eurobond yields are trending lower when looking at the 10-Eurobonds for Egypt, Ghana, Zambia, Senegal, Kenya, Mozambique and South Africa. The most notable moves have been in Ghana and Kenya, with their 10yr Eurobond yields down 162bps and 116bps, respectively, since the start of August. 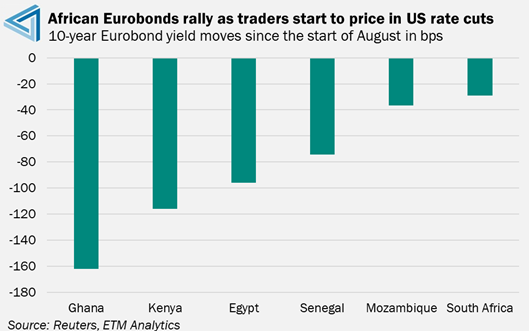 The recovery in African Eurobonds comes on the back of the broader bull flattening bias across core bond markets as traders readjust their interest rate and growth outlooks for the developed world. Fears of a global recession are intensifying as investors fret that the aggressive tightening to rein in inflation will stifle economic activity. A sharp drop in key economic leading indicators, including US and China business sentiment, underpins the notion that the global economic outlook is becoming more gloomy.

The US OIS and Fed Fund Futures market are pricing in a drop in US interest rates from 3.50% at the end of this year to 3.07% at the end of next year and 2.27% and 2.59%, respectively, for the end of 2024. The dovish shift in implied interest rate expectations is bullish for bonds on the belly and long-end and suggests that debt servicing costs could be lower than some had expected in 2023 and 2024. This will come as a sigh of relief for heavily indebted African countries that have been hit hard by the sharp rise in international borrowing costs. Adding to the tailwinds for African Eurobonds has been the modest improvement in risk appetite and still elevated commodity prices, which continue to support tax revenues and foreign currency inflows for African commodity-exporting nations. Idiosyncratic factors have also contributed. For context, optimism surrounding potential IMF deals is providing support for Ghanaian and Zambian Eurobonds.

Macroeconomic: US seeks to strengthen its relationship with Africa

The US has unveiled a new strategy to build a closer relationship with sub-Saharan Africa. The US has expressed that Africa has a critical role in addressing many challenges the world has recently been facing. These include tackling climate control, global food insecurity, and terrorism. 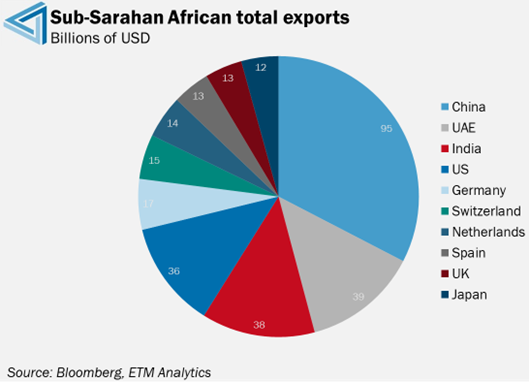 Africa has been a low foreign-relations priority for the US, with the region accounting for just 1.2% of its total two-way trade. However, the relationship between Africa and China has strengthened over the past few years. The US now believes that it has vital interests in common with Africa and wants to focus on building a stronger relationship in the coming years.

The US’s key policy priorities in Africa include building democracy and improving governance, promoting development, peace, security trade and investment, and supporting conservation and a move toward cleaner energy. While the US has contributed extensively to Africa over the past three decades, its efforts to promote democracy, peace and security “have struggled to show the desired impact in recent years.” The US has stated that it is committed to revitalizing and modernizing its traditional tools of statecraft.

Finally, Africa has become highly dependent on China for investments and trade over the last few years. Therefore, having alternative investment options and trade partners could be a factor that helps to contribute to growth in Africa. There has been some concern that a slowdown in China's economy would greatly impact the amount it imports from Africa, and this highlights the importance of Africa diversifying its trade partners.