On Friday, the USD suffered some heavy losses, despite the payroll data reflecting a high degree of resilience. Within the data, the unemployment rate rose, surprising some in the market. Against the backdrop, some companies in the US are downscaling their workforce, and several Fed officials are confirming that the Fed would slow the pace of its hikes. The combination is not great news for the USD, which also saw its support amongst speculators drop. The most recent CFTC data shows that net long positions have shrunk to the lowest in a year, which some would argue is long overdue. The USD has therefore lost ground on a trade-weighted basis and is likely to lose more if other central banks and governments continue adopting more hawkish and austere economic policies. This week, all eyes will turn to the US mid-term elections and whether the outcome changes the balance of power within Congress. The EUR-USD has bounced back up above 0.9900 and looking to potentially test parity, while the GBP-USD recovered off the week’s lows on the weaker USD but may remain plagued by the dovish BoE comments. The JPY has recovered marginally off its lows vs the USD but remains on the defensive.

US 2yr yields surged to nearly 4.8000% on Friday following what was another strong US jobs report. This level was not sustained for long, however, with a pullback occurring towards the end of the day as money markets have remained split on whether the December FOMC meeting will result in a 75bp rate hike or a smaller increase. For the week ahead, CPI data will come into focus and could swing bets either way, depending on what the outcome is. The general bias, however, remains to the topside for now with the outlook for USTs still quite bearish. This was corroborated by last week’s CFTC data, which showed that hedge funds continued to boost their net short positions on UST futures.

Ethiopia: The International Monetary Fund has welcomed the declaration of a ceasefire in Ethiopia and said it is considering the next steps on a potential funding program. The Ethiopian government and the dissident Tigray People’s Liberation Front last week agreed to stop fighting, raising hopes that an end may be in sight to the two-year conflict. According to the lender, the truce represents “a critical step towards restoring lasting peace and stability. Fund staff have ongoing discussions with the authorities on their reform plans, which could set the ground for negotiating a potential new fund program. We will be considering the next steps and discussing these with the authorities.”

Kenya: As a result of a 70% increase in fertilizer prices, the production of corn in Kenya is forecast to drop by 12%-14% this year, further worsening food security in the country. According to Boston Consulting Group, the output of the staple grain is projected at 2.8mn tons, compared with annual consumption of 3.8mn tons, including industrial, animal, and human use. In addition to worsening food security, food price inflation in Kenya is likely to remain strong in the near term.

Morocco: Fitch on Friday affirmed Morocco’s long-term foreign-currency issuer default rating at ‘BB+’ with a stable outlook. According to the agency, Morocco’s ratings are supported by a moderate share of foreign-currency debt in public debt, strong official creditor support, and a record of macroeconomic stability reflected in relatively low inflation and GDP volatility pre-pandemic. Set against these factors are weak development and governance indicators, high public debt, and wider budget and current account deficits relative to rating peers. Factors that could lead to a negative rating action include a failure to consolidate public finances, weaker growth prospects, a deterioration in external resilience, and adverse security developments. Conversely, a positive rating action can result from a material and sustained fall in general government debt/GDP over the medium term, a sustainable narrowing of the current account deficit, and stronger medium-term growth prospects underpinned by economic reforms.

Morocco: Upon completion of the Article IV mission to Morocco for 2022, the International Monetary Fund said that Morocco will need to raise interest rates further if it aims to bring inflation back to 2% in 2024. Recall the central bank projected that inflation would decline from 6.3% in 2022 to 2.4% in 2023 when it raised its benchmark interest rates in September for the first time in 14 years. The lender added that the Moroccan economy experienced a confluence of negative shocks in 2022 that halted the rebound after the pandemic. However, tourism recovery, strong remittances, and resilient exports have partially offset these shocks. Despite an uncertain global environment, growth is expected to recover next year. The IMF also said that high uncertainty and tighter macro-economic policies make it essential for Morocco to accelerate reforms, especially for wider social protection and to boost private sector investment.

Mauritius: In a continuing battle against inflation, the Bank of Mauritius raised its borrowing costs by the biggest margin since introducing the repo rate in 2006 and signaled more rate hikes if inflation is not reined in. The Bank of Mauritius raised its key rate by 100bp to 4.0%, the fourth hike this year, unwinding all of the monetary stimulus rolled out during the coronavirus pandemic. According to a statement from the central bank, “while the output gap from pre-pandemic levels is closing, it is expected that inflationary pressures will continue to prevail.” The bank added that the Monetary Policy Committee stands ready to further pursue its normalization of monetary policy and will meet in December to review the economic situation.

Oil: Oil has kicked off the new week on the back foot, paring some of Friday’s significant gains as China has signalled that it will not be relaxing its COVID-zero policies. Suggestions that some of the stringent regulations would be eased helped oil post a more than 5% gain last week, but we have Brent trading back below $98 per barrel this morning after nearing $99 late on Friday. This morning’s losses have also seen the front-month contract dip back below the 100DMA at $98.09, keeping it as a key technical resistance level to watch.

The final trading session of the week saw the Kenyan shilling weaken further amid increased demand for dollars from the energy sector and low inflows. The shilling closed the session north of 121 per dollar, adding to its year-to-date drop of more than 7.0% against the USD. Unfavourable current account dynamics have detracted from the performance of the currency. Underpinning the weakness in the current account is strong dollar demand from importers, particularly oil importers. 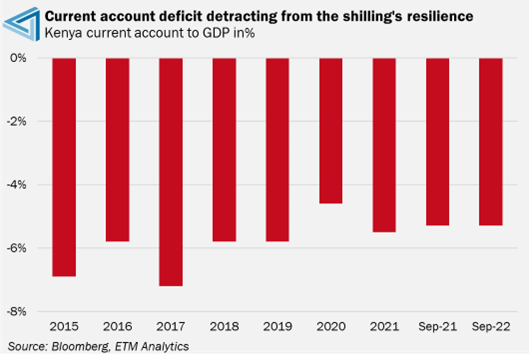 Kenya continues to run current account deficits, which could see the shilling, which remains overvalued on a real effective exchange rate basis, extend its bearish trend in the near term. Looking to this week, the shilling is set to remain under pressure amid increased dollar demand from oil retailing and transport firms.

Notwithstanding the stronger-than-expected headline US jobs print, Friday turned out to be an upbeat day for risk assets after reports surfaced that China may ease strict Covid-19 policy. The news provided a massive boost to risk sentiment, prompting a rally in emerging and frontier market assets. African Eurobonds joined in on the rally. The biggest move on the day was in the price of Ghanaian and Angolan Eurobonds. 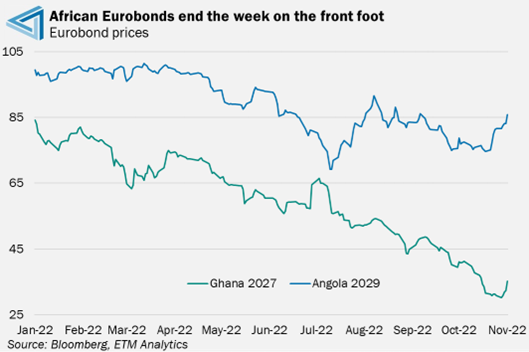 For context, Ghana’s 2027 Eurobond price jumped 8.99% to 35.26, according to Bloomberg data. The outperformance in Ghanaian Eurobonds came on the back of optimism that Ghana will secure a deal worth as much as $3bn with the IMF. The funding would provide much-needed financial relief for the fiscally fragile Ghana and could help the country regain access to the international debt market.

Angola’s 2029 Eurobond price meanwhile gained 3.28% on Friday to close the week at 85.79, according to Bloomberg data. The rally in Angolan Eurobonds was supported by the bounce in international oil prices, which will provide a boost to foreign currency earnings and the government’s coffers. While rising oil prices are positive for Angola, it is worth noting that Angola’s crude production is at the lowest level in more than a decade, meaning that the country isn't taking full advantage of the high oil prices.

The ongoing energy crisis in Europe and sanctions on Russia are presenting a massive opportunity for African metal producers and exporters. One metal in particular that African producers stand to benefit from is aluminium. Africa’s top producers of aluminium are Ghana, Mozambique and Guinea.

While there is an excellent opportunity for African aluminium producers, Ghana’s only aluminium smelter is temporarily shut down after pay protests threaten its operations' safety. Volta Aluminium halted production after cutting power to its smelter because of an invasion by protesting workers. Unions representing workers are asking for a 55% pay increase and for their pay to be linked to the US dollar. The company is currently producing 50kt, well below its installed capacity of 200kt, as only two out of its five pot lines are running due to a lack of maintenance and repairs. 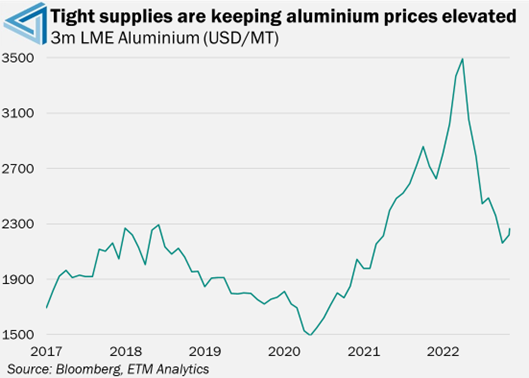 While aluminium prices have come under notable selling pressure this year, the metal is still trading more than 35% above pre-pandemic levels as supply remains tight. Over the last few months, we have seen many European smelters have to cut production or shut down due to the intensifying energy crisis. This coupled with a lot of consumers demanding that the LME put a ban on Russian metals from being sold on the exchange, should support aluminium prices in the coming months.

The risk to aluminium prices is as growth conditions start to slow, demand will likely decrease. However, our expectation is that supply-side pressure will likely outweigh decreasing demand. Therefore, this should present an opportunity for African producers, such as Ghana, Mozambique and Guinea, to take advantage of the gap being left in the market by European smelters. However it is going to be essential that the government puts measures in place to boost investor confidence in the country.