According to the World Bank, the economic impact of the war has been felt through multiple global channels, including commodity and financial markets, trade and migration links, and confidence. Wheat prices have increased 40% since the start of February, as Russia and Ukraine account for a quarter of global wheat exports. Russian ports are operating, but insurance prices have soared and inhibited cargoes from leaving. As a result of these physical and logistical disruptions, higher commodity prices are likely to continue through global value chains, adding to prolonged delivery times and high production costs for manufacturers worldwide.

Oil is tentatively rebounding this morning after the front-month Brent contract dropped back below $100 per barrel yesterday, erasing all of the post-war gains it had made. This morning’s rebound comes as China has eased some of its lockdown restrictions in Shanghai. However, it will likely be short-lived as Chinese authorities have suggested that they will reimpose tight restrictions as soon as cases rise once again, while millions remain confined to their homes still. Investors, therefore, will remain concerned over the demand outlook from the world’s largest oil consumer. This concern is materialising in a narrowing of Brent’s time spreads, with the nearest dated spread now at just 18 cents a barrel.

Uganda: The Bank of Uganda will today meet to decide on its policy rate. The BoU is expected to keep its policy rate unchanged for the fifth straight meeting as an acceleration in inflation lags behind most of its peers and remains well within the 3-7% target range. That said, policymakers will be mindful that external risks to price growth are elevated and could signal policy tightening in the coming months were inflation to rise sharply. That said, the risk of a rate hike today can’t be completely ruled out.

Ghana: According to the Bank of Ghana’s government debt issuance calendar, the bank plans to issue GHS 24bn ($3.24bn) in bonds during Q2 2022. GHS 20bn is set to roll over maturing bonds, while the remaining GHS 4.5bn is fresh issuance to meet the government’s financing requirements. Meanwhile, the government plans to issue 91-day and 182-day T-bills weekly, while 364-T-bills will be issued every two weeks. Two-and six-year bonds will be issued through the book-building method.

Gambia: The International Monetary Fund (IMF) forecasts Gambia’s economic growth to remain unchanged this year as the central bank is likely to tighten policy to contain price pressures emanating from Russia’s invasion of Ukraine. Gambia’s economy is projected to grow by 5.6% this year after rebounding to that level in 2021 from a pandemic-induced low level. According to the IMF, “the repercussions of the war in Ukraine are weighing on the rebound and fueling inflationary pressures. Monetary policy will need to be tightened in the face of increased inflationary pressures, while safeguarding the fragile economic recovery.” Upon completion of the country’s Extended Credit Facility program, the IMF said that Gambia met all but one of the quantitative performance criteria and all but one of the indicative targets set for the review period ending December 2021. The Washington-based lender said that the Executive Board may approve a $7mn disbursement to Gambia when it considers the staff report in June.

Madagascar: S&P on Monday assigned its 'B-/B' long-and short-term foreign and local currency sovereign credit ratings to Madagascar. The outlook is positive, and according to S&P, it reflects the view that they could raise the rating on Madagascar over the next 18 months if the economic and budgetary performance and external accounts position improve, for example, on the back of the implementation of structural reforms, in the context of the "Plan Emergence Madagascar" (PEM) and current IMF arrangement and with support from the international community. The rating could be upgraded in the case of a faster budgetary consolidation or improved external performance than currently expected. Conversely, the outlook could be revised to stable in the case of an adverse terms-of-trade shock resulting in a significant deterioration in the economy's external position. Significant budgetary slippages, the crystallization of contingent liabilities, or climate-related risks could also put pressure on the rating.

Nigeria: Aiteo Eastern E&P, one of Nigeria’s largest oil producers, owes $1.7bn to Shell Plc and seven banks, which, if unpaid, could do significant harm to the country’s financing system. Aiteo Eastern E&P seven years ago purchased a pipeline and an operating interest in one of the nation’s most prized onshore oil blocks for $2.4bn. Zenith Bank Plc, Fidelity Bank Plc, Guaranty Trust Bank Plc, and other Nigerian lenders loaned the company $1.5bn to support the acquisition, while Shell, the seller of the assets, provided $504mn in financing. The parties have been locked in a tangled legal dispute since October 2019, when the creditors notified Aiteo that it was in default.

Rwanda: Inflation in Rwanda accelerated further in March, coming in at 5.6% y/y  from 4.2 % y/y in the month prior. This was the fastest pace of price growth in the economy since October 2020, mainly driven by prices of housing & utilities, restaurants and hotels, furnishings and food & non-alcoholic beverages. Note that higher global energy and commodity prices are set to underpin inflationary pressures in Rwanda for the foreseeable future.

Kenyan Shilling bears remain in control a present, with the currency plunging to its weakest level on record yesterday. The USD-KES closed north of the 115 mark as demand for dollars from firms in the manufacturing and energy sectors weighed. Yesterday’s losses added to the year-to-date depreciation of the KES of over 2% against the USD. A growing import bill has driven the broader KES weakness as the economy picks up pace. Elevated oil prices have also exerted pressure on the KES, given that Kenya is a net oil importer. Meanwhile, traditional supply sources such as the agricultural sector and diaspora remittances remain flat. 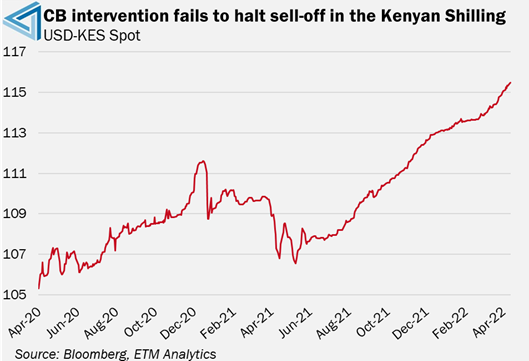 It is worth noting that the KES has continued to weaken despite central bank intervention. For context, Kenya’s forex reserves as of March 31 fell to their lowest level in eight months at $7.84bn. The decline was largely attributed to the sale of dollars by the Central Bank of Kenya to support the Shilling. While the latest data shows that reserves have rebounded to $8.373bn as of April 7, equating to 4.98 months of import cover on the back of the World Bank loan, we see room for further declines in the coming weeks as the KES continues to sell-off.

The KES is expected to remain on the defensive this week due to increased importer demand from companies in the energy and manufacturing sectors. Beyond that, we see risks remaining elevated in the near term. Elevated oil prices, rising fiscal risks, tightening global financial conditions, a potential drought after a poor rainy season in Q4 2021, and the upcoming general elections are factors that pose significant headwinds to the KES.

It has become clear that African governments have regained their taste for Eurobonds this year, notwithstanding the deterioration in global lending conditions. South Africa is the third African nation set to issue dollar-denominated debt this week, following in the footsteps of Nigeria and Angola. The issuance of Eurobonds is a means of diversifying their funding sources from their local bond market, traditional multilateral institutions and foreign aid. 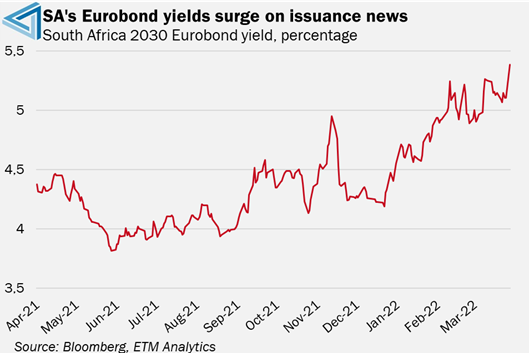 Unlike multilateral loans, Eurobond borrowing is done through commercial terms with the interest rates, terms of the debt and coupon payments determined by market conditions. While interest rates across the globe have risen notably over the past six months following the hawkish shift in monetary policy from major central banks, including the Federal Reserve and the Bank of England, against the backdrop of dampened risk appetite due to the war in Ukraine and lingering Covid concerns, demand from international investors for African hard currency debt remains relatively healthy.

Recall that Angola raised $1.75bn last week at a similar spread to its previous issuance in 2019, with bids coming in at more than double the amount of bonds on offer. Meanwhile, South Africa’s Eurobond issuance comes just a week after Moody’s upwardly revised the country’s sovereign credit rating outlook on an improving fiscal outlook. Note that while global risk appetite is not yet back at pre-Ukraine war levels, African countries, South Africa, Angola and Nigeria in particular, are benefitting wholesomely from elevated commodity prices, which is helping to lure investors.

Moreover, while lending conditions in the Eurobond market have deteriorated, it is worth pointing out that the yield on Angola’s 10-year Eurobond was less than the initial guidance. Bloomberg reported, citing people familiar with the matter, that SA’s Eurobond yields were also set lower than what was initially being discussed. This is a sign that investor appetite for high yielding commodity-linked African sovereign debt remains somewhat healthy despite the sharp rise in interest rates across the globe and investor concerns over the war in Ukraine and re-emergence of Covid infections in China.

Macroeconomic: US Treasury yields continue to rise ahead of the US’s March inflation print

The sell-off in US Treasuries has persisted this morning ahead of data that is expected to show that headline inflation in America accelerated at the fastest pace in 15 years in March. Inflation in the US is expected to have accelerated further in March as the war in Ukraine compounded external price pressures. Consensus expectations suggest that headline inflation rose to 8.4% y/y in March.

With inflation pressures set to remain robust in the months ahead, the Fed has turned decisively more hawkish in its communication. In addition to another rate hike, it is widely expected that the Fed will announce the start of its balance sheet reduction at its May meeting. The big question for traders heading into the May FOMC meeting is whether policymakers decide on a 25bps or 50bps rate hike. 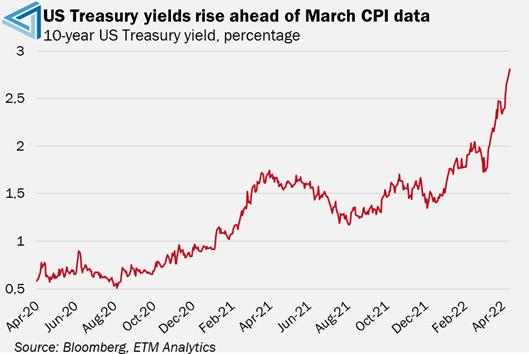 The sell-off in US Treasuries has spilt over into bond markets across the globe, with yields in developing and emerging markets on the rise this morning. With the professional market pricing in more than 220bps worth of US rate hikes for the rest of the year and inflation risks still skewed firmly to the upside, we expect the broader bearish bias in the international bond market to persist in the weeks and months ahead. That said, we are still of the view that market bets that the Fed could tighten by 50bps at each of the next two FOMC meetings are overdone, given the emergence of renewed growth concerns.