In the wake of Queen Elizabeth II's funeral, the focus now turns squarely back on to central banking decisions. The two key institutions of the BoE and the Fed will meet to decide on interest rates and offer guidance on future inflation and decisions. Both events will be market moving and will keep investors on their toes. For instance, the USD remains well supported as the market braces for another robust rate hike and more hawkish talk. For its part, the EUR is not losing much ground as the ECB looks to protect the currency by moving by a similar increment in the future, which offers perspective on why it continues to trade around parity. Overnight, the GBP has also recovered marginally to trade back above the 1.1400 mark as investors position for its expected hike of at least 50bp with more to come. Forecasts show that investors anticipate that the BoE may even hike more than the Fed through the months ahead. Meanwhile, the JPY continues to consolidate just above 143.00 mark.

Egypt: According to the Director of the Middle East and Central Asia Department at the International Monetary Fund (IMF), negotiations between the international lender and Egypt and Tunisia, respectively, for financial assistance packages, are progressing and will be finalized soon. The official added that talks with Egypt and Tunisia concern new programs that will be executed hand in hand with reforms and economic programs put forth by the two countries. The amounts that the IMF will provide to each country will only be determined after the completion of the negotiations. An IMF program is set to help Egypt support the economy after Russia's invasion of Ukraine has sent food and fuel import bills soaring and helped spurred an exodus of foreign portfolio investors from the local debt market.

Ghana: In the final three months of 2022, the Bank of Ghana is set to auction a total of $420mn to authorized forex dealers. The sale, which forms part of the BoG's foreign exchange forward auction, is $270mn more than the amount sold to authorized dealers in Q3 this year. $120mn each will be sold in October, November, and December. There will be a bi-monthly sale of $60mn each in October, November, and December. Expectations are that the improved auction sale will boost dollar supply in circulation and help slow the depreciation of the Ghanaian cedi, which remains the worst-performing African currency against the USD year to date.

Uganda: Uganda's trade gap narrowed by 20% m/m in July, coming in at $288.5mn from $359.5mn in July, mainly on account of higher export receipts and a reduction in the import bill during the month. Year-on-year, the trade gap, however, increased by 41.5%, from $203.92mn in July 2021 to $288.48mn in July 2022. This followed higher growth in the import bill that more than offset the increase in export receipts. Overall, the persisting trade account deficit is likely to compound the pressure on the Ugandan shilling, which has lost almost 7.0% YTD against the USD.

Uganda: President Yoweri Museveni has vowed to consider other investment partners should TotalEnergies heed a recent resolution by the European Union's Parliament to stop the $4.5bn crude oil export pipeline to the East African coast. The European Union's parliament resolution, passed last week, urged the international community to exert maximum pressure on Uganda and Tanzania to stop the project, citing human rights concerns and environmental fears. The resolution has drawn criticism from Ugandan officials, who insist the project is needed to transform the economy.

Mozambique: The International Monetary Fund has reached a staff-level agreement with the Mozambican authorities on the economic and financial policies that could support the approval of the First Review of the program under the Extended Credit Facility arrangement. The agreement is subject to the approval of the IMF Executive Board in December, which would enable the disbursement of SDR 45.4mn (around $63.8mn). According to the IMF, Mozambique has met “all quantitative and structural benchmarks set for the first review, and good progress has been made on the broader structural agenda.” While the macroeconomic environment remains challenging going forward, authorities in Mozambique aim to complete their ambitious economic reform agenda, including a sovereign wealth fund law, reform of the public sector remuneration, and the amendment of the public probity law.

Zimbabwe: The International Monetary Fund said in a statement published overnight that “Zimbabwe’s economy has shown resilience in the face of significant shocks. Russia’s war in Ukraine, the poor rainfall, and price pressures are adversely affecting economic and social conditions in Zimbabwe, already battered by the COVID-19 pandemic. Renewed price and exchange rate depreciation pressures emerged, notably in the second quarter of 2022, with inflation in August reaching 285% over a year earlier.” The IMF said that real GDP is expected to decline from 7.0% in 2021 to 3.5% in 2022, reflecting a slowdown in agricultural and energy outputs owing to erratic rains and rising macroeconomic instability, amidst a recovery in mining and tourism.

Forex: A rise in remittance inflows may alleviate some pressure on Egypt’s current account balance

While Egypt's current account balance remains deeply negative, some positive signs are emerging. Remittance inflows, a major source of foreign currency in Egypt along with tourism, the Suez Canal, and the exports of goods rose by $22.6mn in the first seven months of 2022 to $18.72bn and compared with $18.69bn in the corresponding period of 2021. 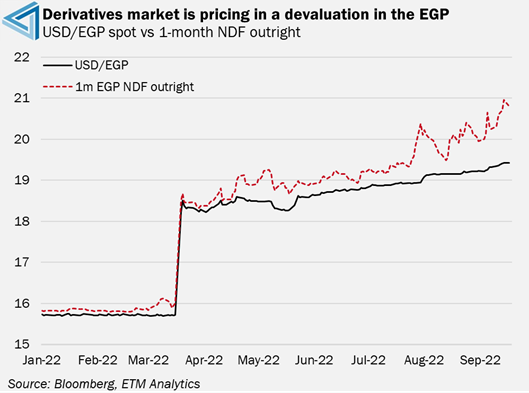 Although rising remittance levels may ease some pressure on Egypt’s current account deficit, it remains sizeable and may widen in the near term as Egypt requires more funds for imports and debt payments. As mentioned in previous commentary, the risk of another currency devaluation as a means to narrow the chronic account deficit therefore exists.

Against this backdrop, the focus this week in Egypt will be centered on the CBE rate-setting meeting on Thursday. While consensus expectations are for policymakers to raise the overnight deposit rate by 50bp to 11.75%, investors will look to whether they will allow for more currency flexibility and devalue the pound to avoid the further build-up of external imbalances and facilitate adjustments to shocks. The near-fixing of the pound to the USD despite headwinds such as the coronavirus pandemic, rising global interest rates, and higher food and energy costs has intensified the downward pressure on the currency, and an adjustment may be required. In-house models show the pound as being overvalued by over 6% on a real effective exchange rate basis, suggesting there is room for depreciation.

Fixed Income: The cost to insure against a sovereign default in Africa has surged

The fiscal degradation that has taken place over the past two years has been acute. The degree of fiscal slippage is apparent when looking at credit default swaps of emerging and frontier markets. 5-year emerging market CDSs are higher than their 5-year averages in 36 of 45 emerging market sovereign issues tracked by Bloomberg, with the widest spreads in Argentina, Ghana, El Salvador, Pakistan and Tunisia. 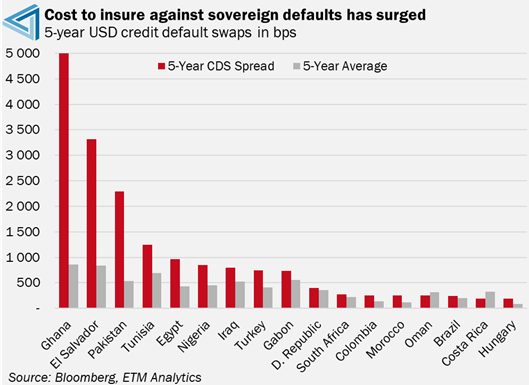 African and Latin American sovereigns have seen the most significant widening in their spreads over the past two years. This implies that African and Latin American sovereigns have been hit the hardest by the triple-pronged sword of the Covid-19 pandemic, global monetary policy tightening and deterioration in global risk appetite linked to Russia’s invasion of Ukraine.

While there have been some positive developments surrounding debt reprieve in recent weeks, with the likes of the International Monetary Fund, the World Bank and China coming to the party, markets are still pricing in considerable default risk for several African countries. Most notably, Ghana, Egypt and Nigeria. Markets will be watching closely to see if these three nations are able to secure some form of fiscal reprieve, which would go a long way in easing fiscal concerns and should result in a reduction in fiscal premiums baked into the assets of these respective countries. Failure to do so however would likely see markets price higher fiscal premiums as global lending conditions deteriorate amid rising interest rates in the world’s largest economies.

Coming as music to the ears of fiscal hawks, Kenya is planning to scrap its fuel subsidy by November, according to central bank Governor  Patrick Njoroge. Partly driven by the government's fuel subsidy, Kenya’s public debt ballooned to $71.8bn in June, marking an 11% y/y increase. The fiscal slippage has led the International Monetary Fund to classify Kenya at high risk of debt distress. Commenting on the news that Kenya plans to remove the fuel subsidy by the end of the year, the IMF said that it welcomes the removal of the subsidy as it “recognizes the very limited fiscal space that Kenya has.” 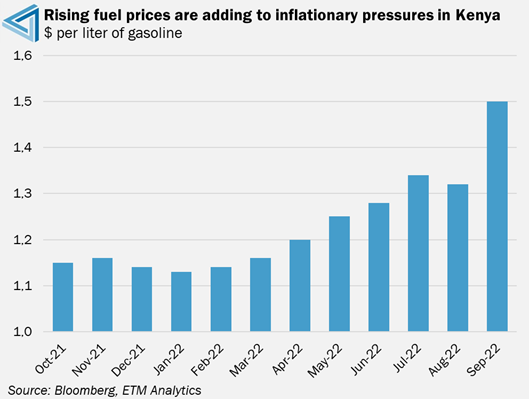 Note that Kenya has been in deliberations with the IMF to receive funding; however, one of the conditions was that the fuel subsidy had to be removed. Therefore, this news suggests that Kenya is one step closer to securing a deal with the IMF. While this is encouraging from a fiscal perspective, from an inflation point of view, the removal of the subsidy will likely add to inflation pressures and drive headline inflation towards double-digit territory in the fourth quarter of this year.

The newly elected government has been left with the challenging task of quelling surging living costs and consolidating the country’s fiscal account while at the same time ensuring the economy remains on a healthy path. While risks facing Kenya are significant, the newly elected government has shown some promising signs in its first few days in office. Investors will however need to see more concrete evidence that the government is committed to rolling out structural reforms before they go overweight Kenyan assets.