On the first day of 2021, the African Continental Free Trade Area (AfCFTA) came into effect after having been delayed from its mid-2020 implementation deadline due to Covid. According to the World Bank, the agreement connects 1.3 billion people across 54 of 55 African Union (AU) countries with a combined GDP valued at US$3.4 trillion, and is the 2nd largest free trade bloc by area (after the WTO) and 3rd by population (after the WTO and OPEC).

AfCFTA aims to eliminate tariffs between members on 90% of line items over the next five years (or ten years for less-developed nations), and tariffs on another 7% of line items considered sensitive will be eliminated by 2030 (or 2033 for less-developed nations), ultimately zero-rating the tariffs on 97% of line items that account for at least 90% of trade. It also aims to reduce non-tariff barriers (NTBs) on both goods and services on a most-favoured-nation (MFN) basis and will be accompanied by measures that facilitate trade through the implementation of a trade facilitation agreement (TFA).

The UN Economic Commission for Africa estimates that AfCFTA has the potential to increase intra-Africa trade by over 50%, while the World Bank estimates that it could boost Africa’s income by US$450bn by 2035 (+7% relative to the baseline) and add an additional US$76bn to global income. Other benefits from the World Bank report relative to the 2035 baseline include lifting 30 million Africans out of extreme poverty, boosting exports by US$560bn (29%, mostly in manufacturing), and raising wages by nearly 10% (with larger gains for unskilled workers and women, reducing inequality). 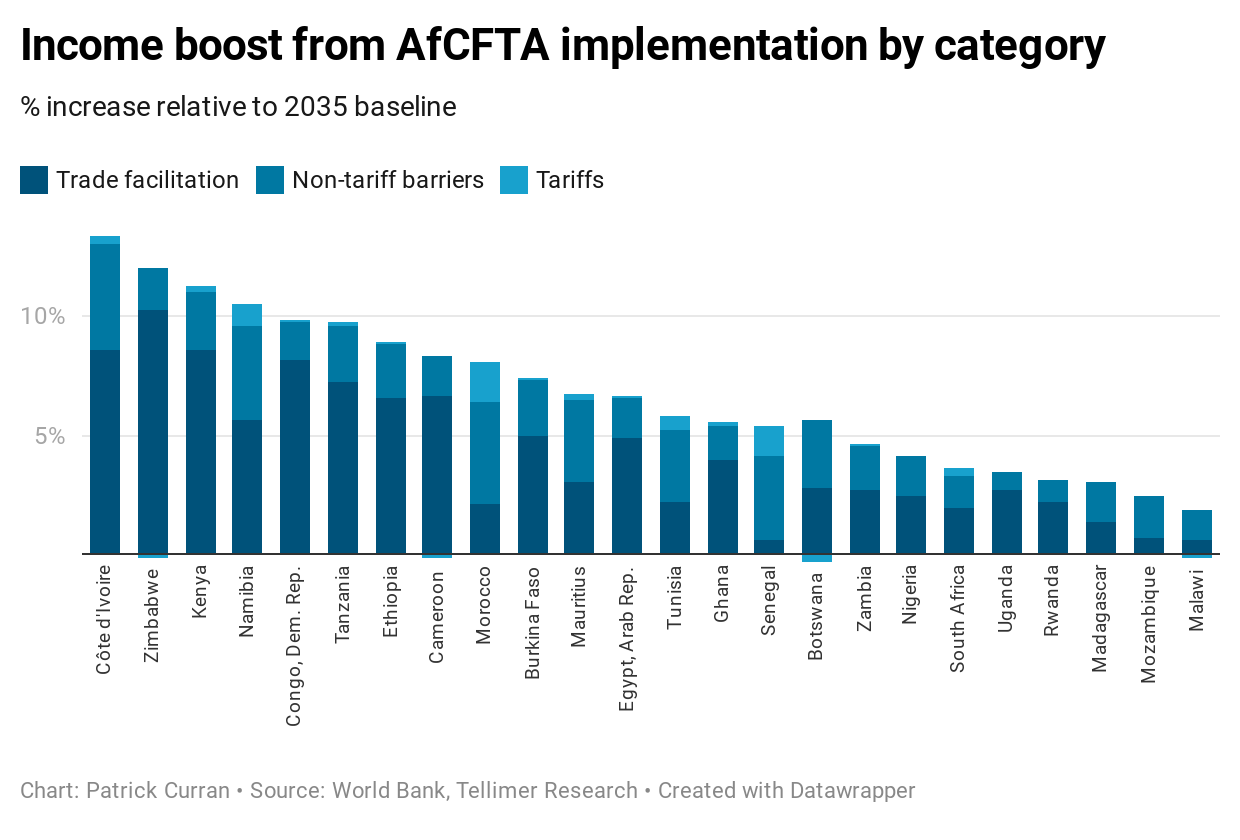 Tariffs across Africa currently average 6.1%, and trade is highly concentrated, with 1% of tariff lines accounting for 74% of imports in the average country. Countries can therefore maintain a protectionist stance even if the vast majority of tariff lines are eliminated, hence the requirement to eliminate 97% of tariff lines totalling over 90% of trade volume. 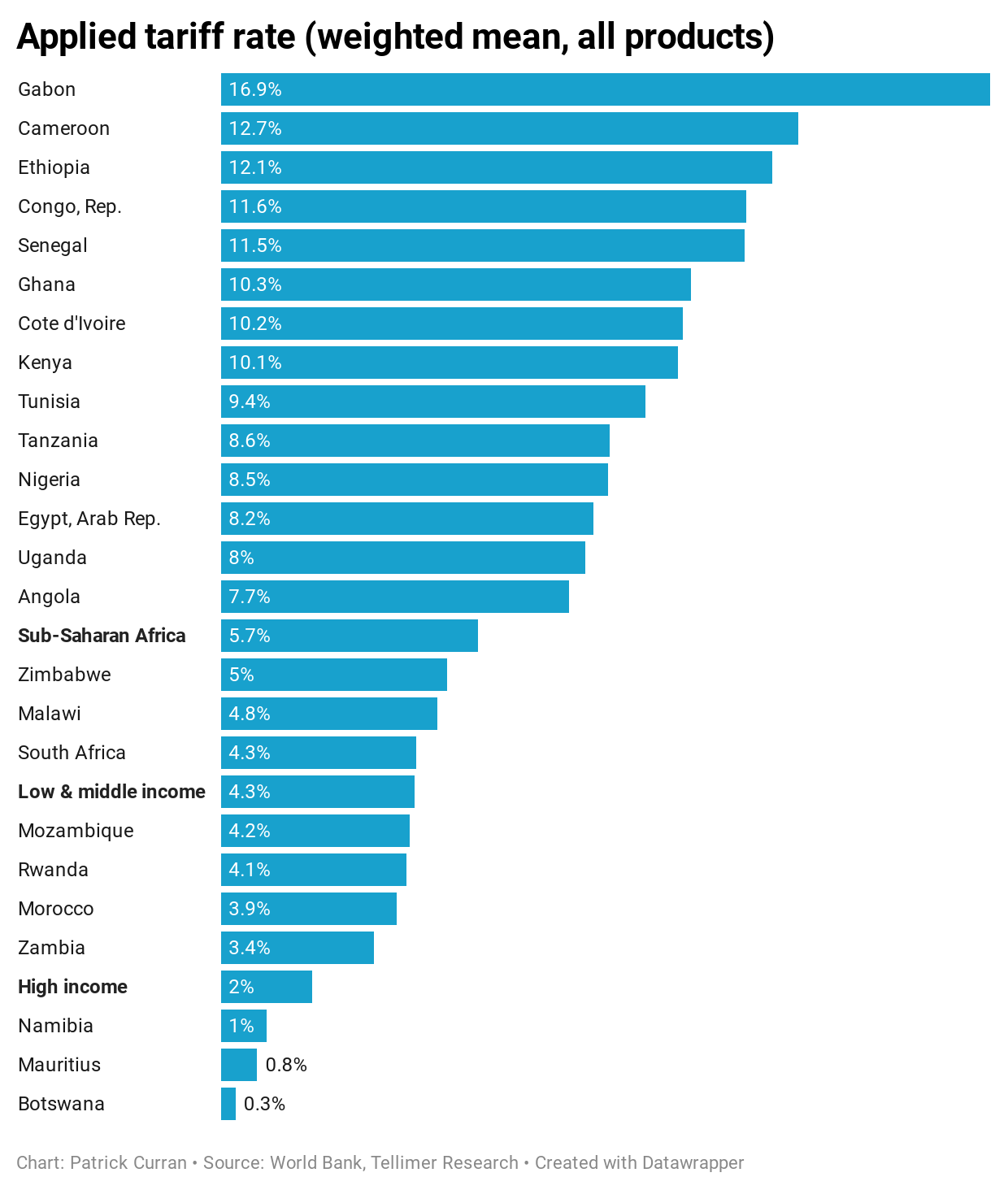 Liberalisation will be greatest for the countries with the highest tariffs, including Gabon, Cameroon, Ethiopia, and the Republic of the Congo. Meanwhile, Botswana, Mauritius, Namibia, and Zambia already have relatively low tariffs and will need to do less heavy lifting to come in line with AfCFTA requirements. On a trade-weighted basis, intra-Africa tariffs will decline from 5.2% to 1.4%, with the highest declines in manufacturing (from 7% to 2%) and agriculture (from 5% to 2%).

While tariff liberalisation is important, by itself this would only boost Africa’s income by 0.2% (cUS$10bn) by 2035. Meanwhile, stronger trade facilitation will lead to a 4.5% (cUS$290bn) income boost while the removal of 50% of existing NTBs will lead to a 2.3% (cUS$150bn) income boost. The latter two categories will aim to address historical issues such as excessive bureaucracy and red tape, weak infrastructure, information asymmetries, and institutional weakness. 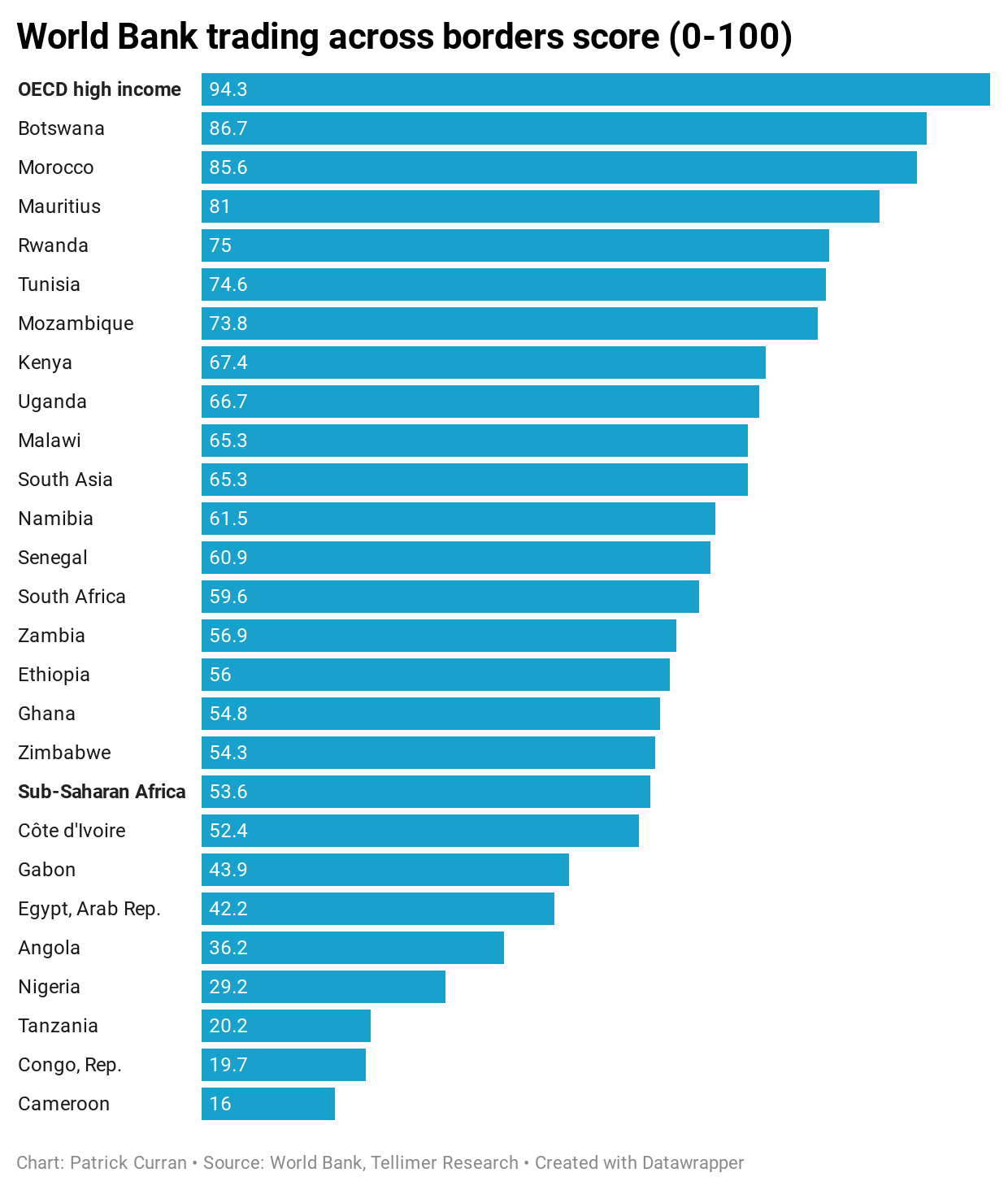 Benefits will take time to materialise from a low base

Fitch believes that “the removal of non-tariff barriers to trade under AfCFTA is likely to lag behind the agreement’s ambitions,” and experts highlight challenges such as persistent political unrest and corruption that will remain as a key impediment to trade in many countries even if AfCFTA is implemented in full. While tariffs will be the most visible signal of AfCFTA progress, the impact will be minimal without the removal of NTBs and improved trade facilitation.

Further, Africa’s yawning infrastructure gap will not be closed overnight and will require costly investments in the continent’s road and rail infrastructure. IMF research has shown that improving the quality of trade logistics in Africa to the global average level would increase intra-African trade by 12%, but unlocking these gains will require billions of dollars of investment from public and private sources annually over a sustained period of time. 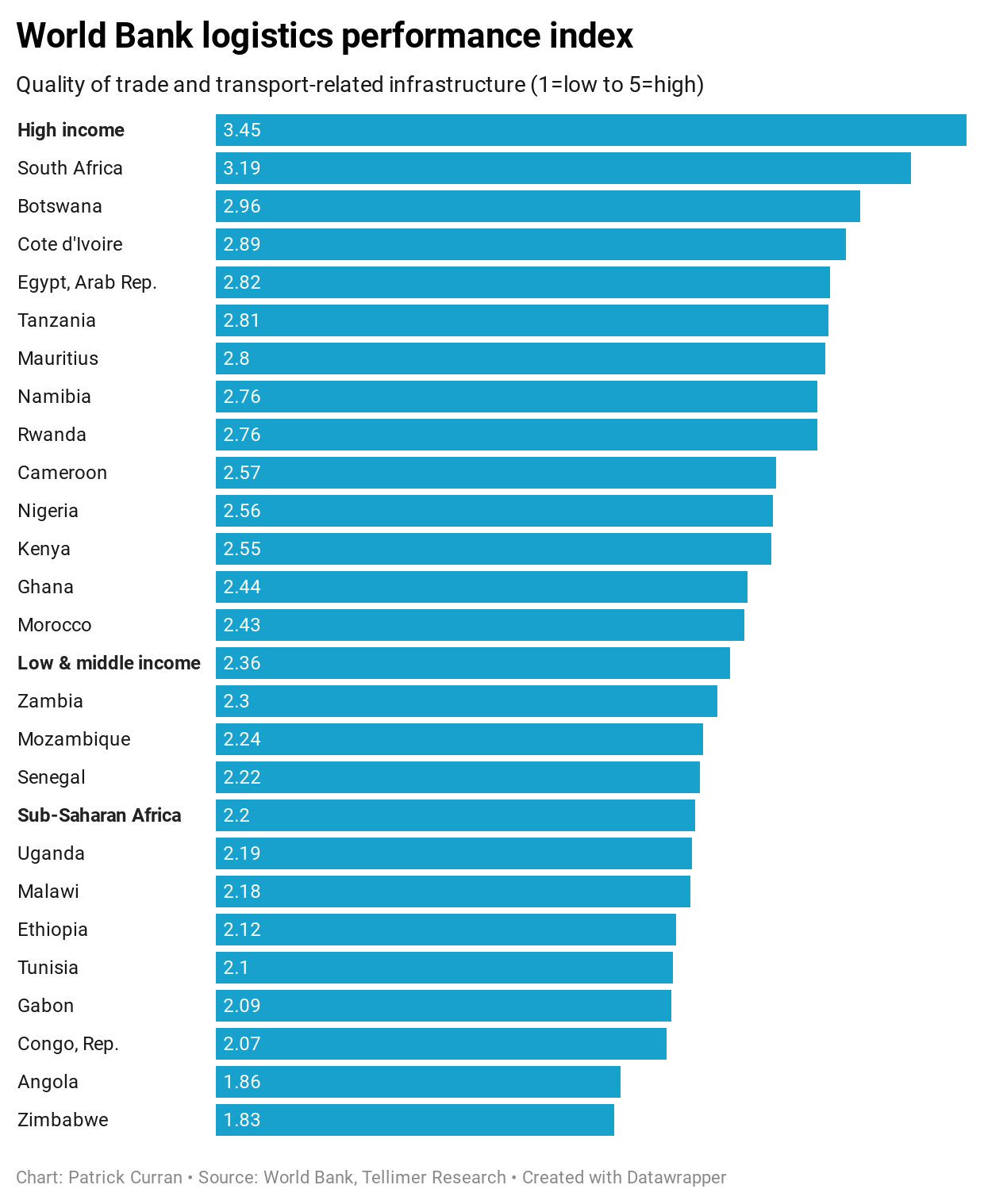 In addition, it is far from clear that AfCFTA will be implemented smoothly. While 54 of the 55 AU member states have signed the agreement (all except Eritrea), only 34 have ratified it. Meanwhile, only 41 states have already submitted tariff reduction schedules, and the all-important annex outlining the rules of origin has not yet been completed.

Politics will likely serve as an ongoing impediment to full implementation, with some countries more committed than others. Trade liberalisation may require politically difficult decisions that governments, many of which are still reeling from the impact of Covid and facing potentially difficult elections, may shy away from.

Taking all this into account, gains from AfCFTA will be limited for the foreseeable future and will start from an incredibly low base. In 2019, only 12% of Africa’s $560 billion worth of imports came from the continent. This compares to 59% in Asia and 68% in Europe, according to UN data. 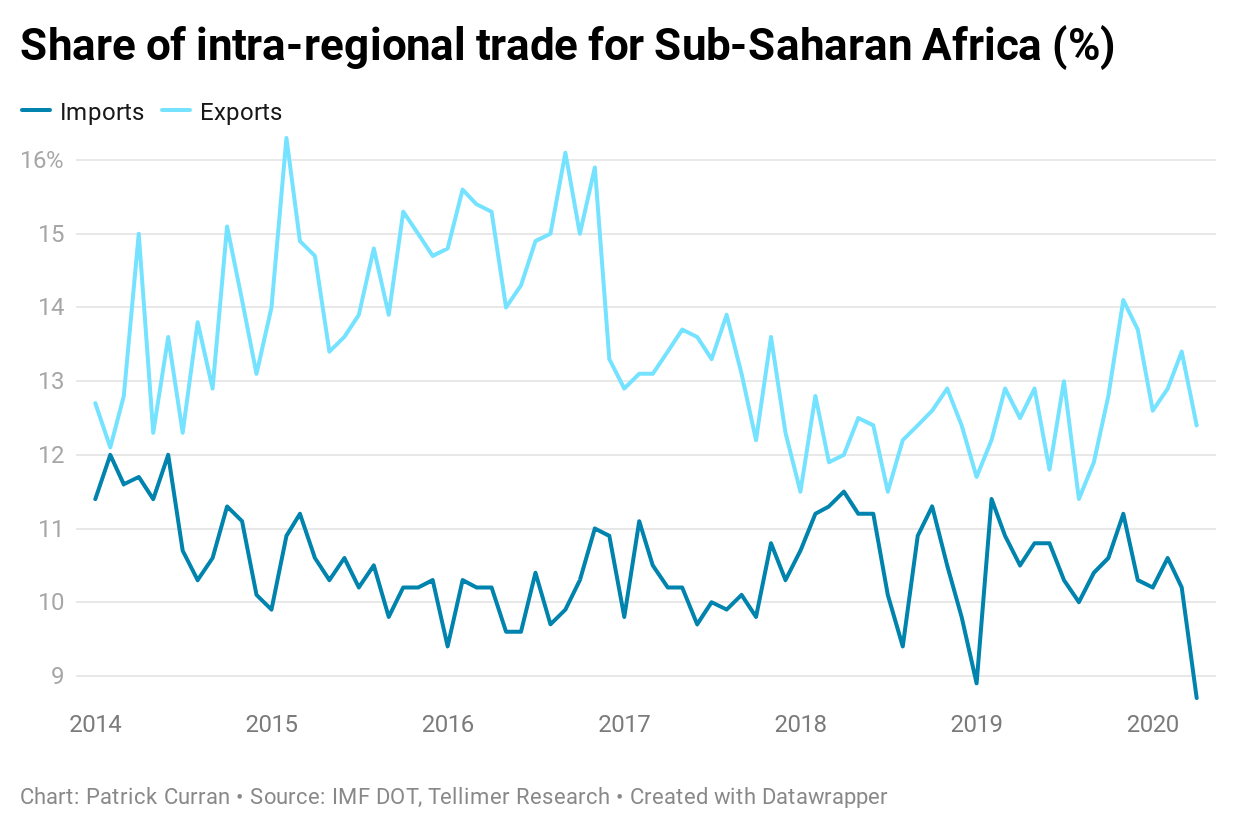 Impact will differ across and within countries

Over the longer term, AfCFTA will give life to many countries’ industrialisation efforts. While many countries have too small a consumer market to be an attractive investment destination, AfCFTA will effectively expand the size of the potential consumer market for its members many times over. As a result, manufacturing investment, both domestic, intra-Africa, and international, will flow to the countries with the most attractive investment backdrop.

We published a regional manufacturing scorecard in September to gauge the attractiveness of various countries as a manufacturing hub on the continent, with Ethiopia, Nigeria, South Africa, Mauritius, and Kenya scoring the highest. As the benefits of AfCFTA begin to materialise, investment should flow to these countries to reflect their relative attractiveness in the context of a scaled-up common market. 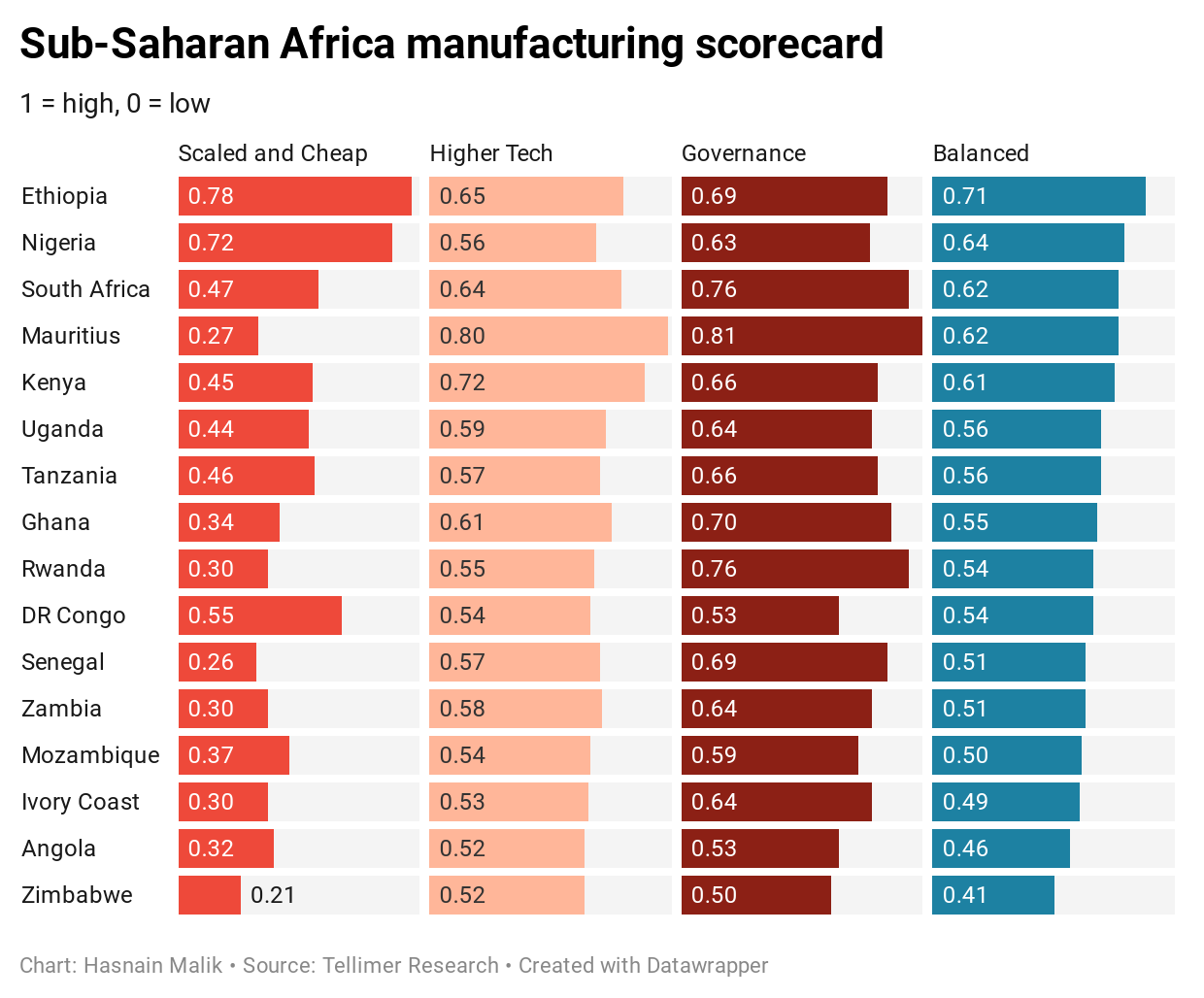 More generally, we think benefits will accrue most to larger countries by enabling them to boost production for export (as they can benefit more from economies of scale), or those with higher value-added production processes (that compete with outside imports, versus lower value-added products which most countries can already produce domestically and for which import demand is therefore low).

The World Bank estimates output gains to be largest in the services sector (US$147bn), followed by manufacturing (US$56bn) and natural resources (US$17bn), with a small decline in agriculture (US$8bn) relative to the 2035 baseline. These estimates mask regional differences, with large manufacturing increases in North and Southern Africa coming at the expense of declines in West, East and Central Africa, and a large agricultural decline in North Africa offsetting gains elsewhere.

After several delays, the implementation of AfCFTA should be applauded and will likely have a positive long-term economic impact. Stronger trade ties could even have the ancillary benefit of reducing the potential for inter-regional conflicts. However, implementation will ultimately be slow and incomplete, and investors should not overestimate the potential impact over the short-to-medium term.

It is also not a foregone conclusion that the AfCFTA will ever be implemented in full. While the consensus is that major trade blocs such as the ASEAN Free Trade Area and EU Single Market have had a positive impact on trade and output, other blocs like Mercosur in Latin America have failed to achieve much of an impact as internal disputes have slowed progress towards implementation.

In addition, the impact will be uneven across and within countries. Policymakers must strive to boost export competitiveness so they do not lose out to their neighbours, and may have to consider expanding social safety nets to help protect the most vulnerable from the impact of liberalisation (especially small artisan producers who may get boxed out by cheaper imports).

While the investment and economic implications will be limited for the time being, we will keenly observe progress on AfCFTA implementation and welcome its adoption as a first step towards boosting Africa’s long-term economic growth and industrialisation ambitions.

West Africa’s single currency – the value is in the journey, 24 November