There has been a considerable shift in monetary policy from major African central banks over the past couple of weeks as inflation pressures persist. Factors driving up inflation include ongoing supply chain pressures, resurgent international oil prices, elevated food costs, and broad-based currency weakness. African central banks that were hiking rates have turned more aggressive, while those who had been communicating that they are committed to supporting their economies have turned less accommodative. 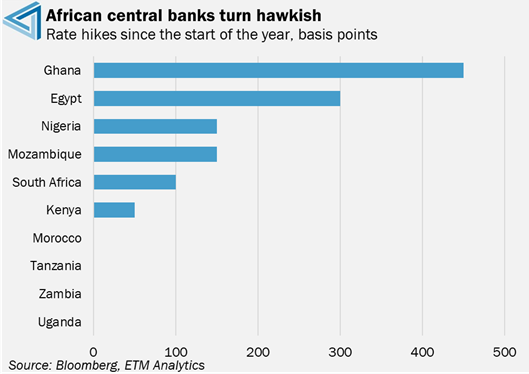 In 2022, we have seen the likes of the Bank of Mozambique, Bank of Egypt, South African Reserve Bank, Bank of Ghana, Central Bank of Nigeria, and the Central Bank of Kenya hike their respective policy rates. The Central Bank of Nigeria and Central Bank of Kenya rate hikes came as a surprise after policymakers in both countries had previously communicated that they would keep rates on hold until economic growth rebounded. The magnitude of the rate hikes has ranged from 25bps in South Africa to 250bps in Ghana. The purpose of this piece is to review and provide an outlook for monetary policy in countries that have hiked and the impact on their fixed income markets going forward. 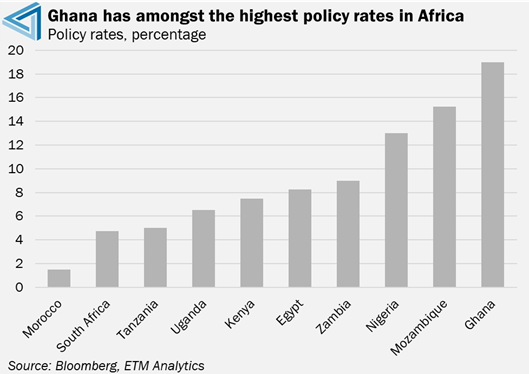 The Central Bank of Egypt in May raised rates for the second straight meeting in a bid to rein in inflation expectations and restore the allure of its local debt with foreigners and investors amid tightening global monetary policy conditions. The CBE increased the deposit and lending rates by 200bps to 11.25% and 12.25%, respectively. This brought the cumulative rate hikes to 300bps each for the deposit and lending rates on a year-to-date basis. The aggressive momentary policy stance comes as consumer prices surged to a multi-year high as food prices surged on the back of the war in Ukraine, the source of the country’s grain imports, which are the cornerstone of a bread subsidy program used by about 70% of its population. Also, fanning inflationary pressure was the 15% devaluation of the Egyptian Pound on March 21.

The tightening implemented by the CBE shows that policymakers are looking to reverse the decline in Egypt’s inflation-adjusted interest rate, which had spurred a wave of foreign investment in the local debt market in recent years. After inflation climbed to 13% in April, both policy rates turned negative when adjusted for prices for the first time since 2018. Note that a declining real rate in February through April, in conjunction with global risk-off conditions and the sensitivity of Egypt to the situation in Ukraine, saw more than $20bn in foreign capital outflows from Egyptian bonds this year. 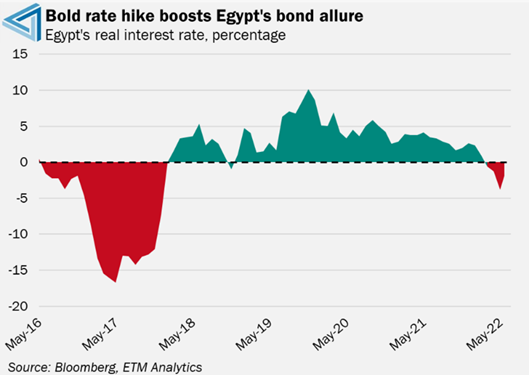 Although the real rate remains negative, the tightening by the CBE shows investors that they are committed to restoring Egypt’s bond attractiveness. With expectations that the risks for further policy tightening exist, domestic bond yields are likely to rise as the market prices in a steeper rate path, but that should help lure foreign capital back into the local debt market. While the attractiveness of Egyptian bonds has dwindled recently, we remain of the view that Egyptian bonds are an attractive bet and a great way to extract yield for international investors. However, the rate hikes will have a negative impact on Egypt’s fiscal position, which is already one of the most fragile in Africa and the Middle East, as it will push up debt servicing costs significantly.

Following its record hike of 250bps in March, the Bank of Ghana (BoG) added another 200bps at the May meeting, bringing the policy rate to 19% as it sought to address current inflationary pressures to re-anchor expectations and help foster macroeconomic stability. The aggressive tightening from the BoG comes amid soaring inflation, with consumer prices reaching a near two-decade high of 23.6% y/y in April, while Ghana has experienced capital outflows amid a worsening fiscal outlook. With debt expected to continue rising at an alarming rate despite government interventions, there has been a notable rotation of Cedi bonds by foreign investors. Tightening global financial conditions have also compounded this outward rotation as investors seek less risky assets.

Governor Ernest Addison expects inflation to rise further in the months ahead, albeit at a slower pace. However, it is worth pointing out that the tightening of monetary policy by the BoG since November has so far done little to prevent a sell-off of dollar-denominated government debt that’s fueling a slide in the Cedi. The currency’s depreciation has added to inflation risks exacerbated by Russia’s war with Ukraine, extreme weather, and pandemic-related supply-chain disruptions. Unless the Cedi depreciation is arrested and inflation slows, we see risks of further policy tightening in the near term by the BoG. 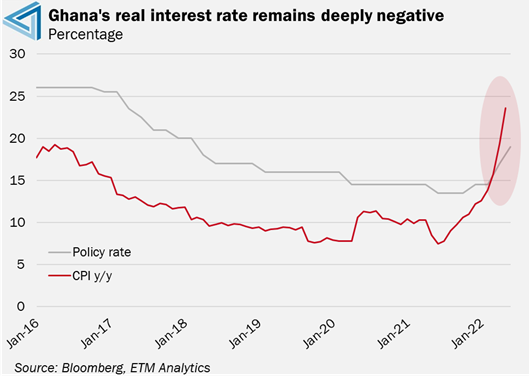 The tightening by the BoG is set to make it harder for the government to service its domestic debt as costs are set to increase at a time the government is trying to reduce expenditure. Ghana has become reliant on domestic debt after having been unable to access the Eurobond market this year following downgrades in its sovereign credit rating status by Moody’s and Fitch. Ghana’s total debt stock rose to 78% at the end of Q1 from 66.3% a year earlier, and Ghana is already classified as being at high risk of debt distress by the International Monetary Fund. With debt costs set to increase, a steeper rise in Ghanaian bond yields is likely. While we advise against going long Ghanaian bonds in the next 1-6 months, given the uncertainty, there is an opportunity to go long in the next 6-12 months should the government remain committed to its reform agenda. Meanwhile, with currency risks expected to remain skewed to the upside over the medium term, we favour Ghanaian Eurobonds over local currency bonds.

The Central Bank of Nigeria (CBN) delivered its first rate hike since July 2016 at the May meeting, joining a host of central banks on the continent that have hiked their policy rates to curb inflationary pressure and boost portfolio inflows. The CBN hiked its benchmark interest rate by 150bps to 13% in a unanimous decision that came as major DM central banks adopt increasingly hawkish stances that have reduced the appeal of Nigerian assets to offshore investors, triggering capital outflows and currency weakness. The Naira's depreciation, which is also being fuelled by politicians stocking up on dollars before Nigeria's primary elections, has added to inflation risks exacerbated by Russia's war with Ukraine, extreme weather, and pandemic-related supply-chain disruptions. 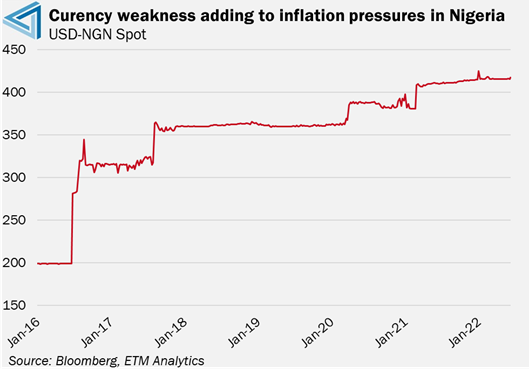 Speaking post the decision, Governor Godwin Emefiele said, "While it may seem contradictory to raise rates in the face of fragile growth, it is a dilemma that most central banks around the world today are grappling with at this time. On balance, it is quite clear and compelling that attacking inflation is more urgent in the sequence of policy objectives in this regard." This marked a shift in rhetoric, with the CBN having previously prioritized FX stability and growth over price stability. 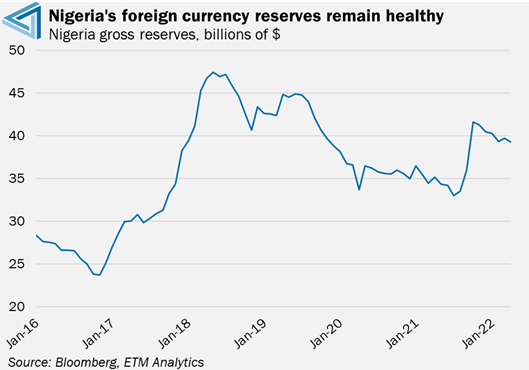 In addition to external price pressures, domestic inflationary pressures from increased election spending, driving demand for money in the economy suggest that risks to the inflation outlook remain tilted to the upside, and if inflation does therefore not slow, another rate hike may be on the cards this year. The rate hike is set to translate into higher borrowing costs, both external and domestic, while capital intensive and interest-rate sensitive sectors such as manufacturing and oil and gas will see a net rise in operating costs. While short-term yields may increase further in the coming months, they are unlikely to meaningfully bolster portfolio inflows. Note that concerns that the Naira is overvalued, a lack of flexibility in the exchange framework, and liquidity constraints are some of the factors weighing on investment in Nigeria.

In a surprise move, the Central Bank of Kenya raised its key interest rate for the first time in almost seven years. The CBK hiked the interest rate by 50bps to 7.5% to anchor inflation expectations as price pressures mount due to an increase in commodity prices. According to CBK Governor Patrick Njoroge, the decision was taken because of "elevated risks to the inflation outlook due to increased global commodity prices and supply chain disruptions.” 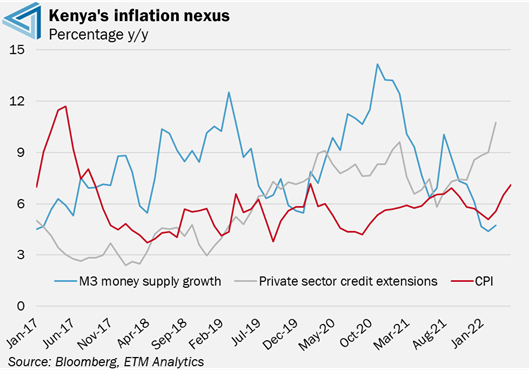 Inflation accelerated to 7.1% y/y in May from 6.5% y/y in April in March amid rising food and fuel prices. Headline inflation in Kenya is edging closer to the upper limit of the Central Bank of Kenya’s 2.5%-7.5% inflation target band. While inflation risks in Kenya are tilted to the upside, given that the money supply growth remains relatively contained, it is unlikely that inflation in Kenya will spiral out of control. That said, we expect that the CBK will continue to hike rates to maintain the monetary policy differential with the US while providing support for the Shilling which remains under pressure. 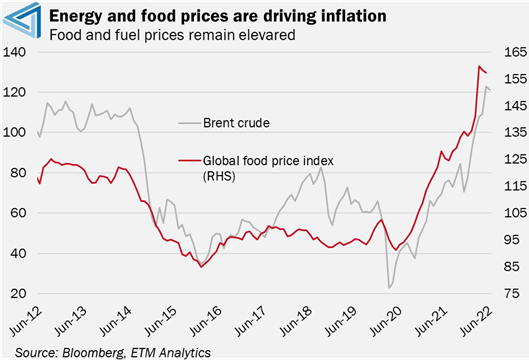 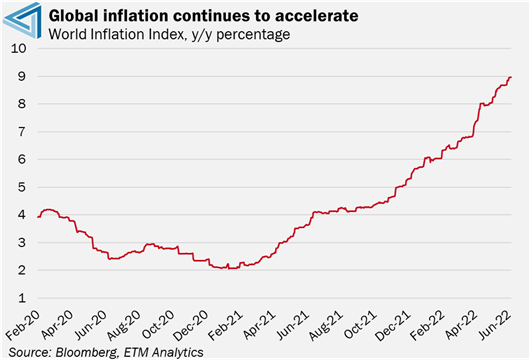 With inflation pressures skewed firmly to the upside as global supply chain pressures persist, against the backdrop of broad-based currency weakness, we expect the monetary policy tightening in Africa to persist in the months ahead as policymakers look to rein in inflation pressures. Countries that are more vulnerable to fuel and food imports are more susceptible to inflation and more aggressive monetary policy tightening. Central banks across the region will also want to maintain their monetary policy differentials with major developed market central banks to maintain some order of currency stability. While interest rates across the continent are expected to rise in the months ahead, we are of the view that the market is pricing in too much rate hike risk in some cases, given the deteriorating global growth outlook