Oil markets took a bit of a battering yesterday, with the front-month Brent contract sliding by more than 3% on the day, nearly touching the $65 per barrel mark through intraday trade. The losses were driven by risk-off trading conditions, a confirmation of a build in stockpiles, as well as news that suggests that Iran will soon be able to resume exports of its crude. A top EU official suggested yesterday that all parties may return to the 2015 agreement before Iran’s presidential elections in mid-June. Early estimates suggest that this could bring back around 500k barrels a day of supply from as early as the third quarter.

Yesterday's FOMC minutes made for interesting reading. Although some members broached the topic of tapering, the Fed remains committed to supporting the economy for as long as its required. Inflation's rise is seen as temporary, some of the labour market data has not been as strong as anticipated, and there is still some way to go before the committee's objectives have been achieved.

Zambia: In line with expectations, the Bank of Zambia (BoZ) yesterday left its policy rate unchanged at 8.50%. Underlying the rationale behind the decision was the need to allow for the rate hike in February to take full effect on the economy. While inflation is forecast to remain above the upper bound of the 6-8% range for at least the next eight quarters, the bank indicated that price growth pressures are expected to ease faster than expected, mainly due to the improved supply of food, particularly corn and wheat. Concerns over existing financial vulnerabilities in the financial sector and fragile growth also supported the Boz’s decision. The BoZ, however, reiterated that it remains committed to adjusting the policy rate upwards should the expected drop in inflation not materialize sooner than anticipated.

Zambia: Fiscal dynamics were also in focus in Zambia on Wednesday. Governor Mvunga said that he was “positive” talks with the IMF over a debt restructuring would be successful. Mvunga added, “the announcement that the substantive understanding has been reached on a macroeconomic framework between the IMF and the government, the impending one-off allocation of SDRs to help countries fight the COVID-19 pandemic, and improved copper earnings are important developments that can help create much needed fiscal space.”

Morocco: In his presentation to lawmakers yesterday, the Moroccan Tourism Minister reported that air passenger traffic to and from Morocco is projected to remain weak through 2023 and only to return to pre-pandemic levels in 2024. The recovery in the tourism sector from last year’s plunge is likely to stall further amid the ongoing COVID-19 epidemic. The Tourism ministry noted that tourism arrivals in the first quarter of this year were 78% less than the first three months of 2020. Recall that the Bank Al-Maghrib in March slashed its 2021 forecasts of tourism receipts by around a fifth from the December projections.

Zimbabwe: In an annual budget review, Finance Minister Mthuli Ncube reported that Zimbabwe recorded a budget surplus of Z$20bn ($236mn) last year, supported by the increase in VAT earnings and improved earnings from the mineral sector. The country earned $3.2bn from mineral exports in 2020 versus $2.8bn in the previous year. Furthermore, Finance Minister Mthuli said that the country’s debt stock stood at Z$14.8bn or 78% of GDP last year, with the majority of the debt being external. For context, external debt was sitting at $8.43bn in December 2020. In addition, against the backdrop of the stimulus package implemented last year, the government expects GDP growth to come in at 7.5%, an upward revision from the 7.4% forecast made in December.

Ghana: Producer price inflation in Ghana softened in April, coming in at 11.1% y/y compared with 13.0% y/y in March. This marked the first drop in producer prices so far this year and can be attributed to a decrease in costs in all subsectors. The PPI report from the Ghana Statistical Service revealed that mining and quarrying products contributed significantly to the slowdown in the annual producer price inflation after the costs decelerated from 22.7% y/y in March to 11.9% in April. Notwithstanding the recent decline, annual producer prices in Ghana remain elevated compared to levels seen in April 2020. The strong PPI growth suggests that inflation pressures are still supported. Given the increasing global commodity prices and supply constraints due to COVID-19, this drop in producer prices is unlikely to be sustained in the coming months.

South Africa: The South African Reserve Bank (SARB) has a slightly easier decision in today’s rate announcement. The SARB will be needing to convince market participants that inflationary pressure will be transitory and will still average below its 4.5% midpoint target this year, that’s if it still sees room for accommodative monetary policy. Forward guidance will thus be key and the market will look to adjustments to the inflation and growth outlooks. Overall, rates hikes may ultimately be pushed into the end of the year while policy in developed nations also remains loose and the ZAR stable.

Developments overnight in the industrial metals complex will likely filter through to many African FX pairs given their reliance on base metals as a large portion of their export revenue. Global inflation concerns peaked yesterday which led to thoughts of tighter monetary policy. Added to this,  flare ups of the COVID-19 virus in various parts of world stoked fears that growth may be patchy and some of the efforts made to rebuild could stall. Equally foreboding was the message by the ECB yesterday. Bloomberg reported the bank warning about risks to financial stability amid high debt burdens and “remarkable exuberance” in markets.

Copper fell by some 4% yesterday as did Zinc and Nickel. Lead shed around 2.5% as did aluminium in the broad market correction which to be fair is often needed to clear out stale longs and tactical price takers

This is likely to see currencies like the ZMW come under renewed pressure given its reliance on copper to fund its trade account and budget. The steady depreciation of the ZMW is something that the Bank of Zambia has managed well, keeping the currency within a path that it sees fit, so onshore FX may not respond as aggressively as the offshore market. We expect the NDF market to move higher as paying interest dominates the trading session. The NGN and the others may experience some pressure in the NDFs given the drop in oil.

Stronger than expected CPI data saw South African government bonds (SAGBs) come under some renewed selling pressure on Wednesday. Headline inflation came in stronger than expected in April, rising to a fourteen-month high of 4.4% y/y, up from a 3.2% y/y rise in the previous month. The consensus expectation was for a slightly less pronounced increase of 4.3% y/y.

While yields across the curve traded higher yesterday, more pronounced movements were observed at the front-end of the curve. Notably, the 2-year SAGB yield rose 10bps to 4.90%. The 10-year tenor, meanwhile, closed the session 5bps higher at 9.11%. The 10v2 bond spread therefore narrowed to 421bps. This compares to the year-to-date high recorded at the start of this month of 472bps. 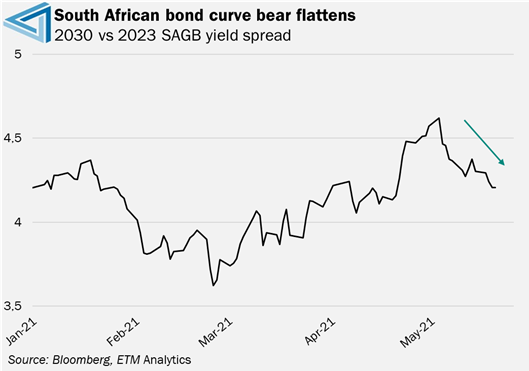 While the SAGB curve has flattened notably this month, relative to pre-pandemic levels, the curve remains relatively steep, reflecting deeply entrenched fiscal risks. Note that South Africa’s fiscal challenges have been compounded by the COVID-19 pandemic as the government ramped up spending to bolster the health care system and cushion the economy from the impact of the pandemic.

Looking at the session ahead, a cautious bais is expected amongst traders ahead of the much anticipated South African Reserve Bank rate announcement this afternoon and S&P‘s rating update on Friday, which could see South Africa slide further into junk status. Although a hawkish stance from the central bank could add pressure to bonds on the front-end of the curve, given the extent of South Africa’s fiscal challenges, we expect a significant degree of steepness to remain baked into the SAGB curve going forward.

After delivering a surprise 300bps rate hike at the start of the year to stomp out rising inflation expectations, the Bank of Mozambique has kept rates on hold. Yesterday was no different. In line with expectations, the Bank of Mozambique’s Monetary Policy Council voted in favour of leaving its benchmark monetary policy rate, the MIMO rate, at 13.25%. The MPC also decided to leave the interest rates on the Standing Deposit Facility at 10.25% and the Standing Lending Facility at 16.25%, as well as the Reserve Requirement ratio for liabilities in domestic and foreign currency at 11.50 % and 34.50%, respectively. 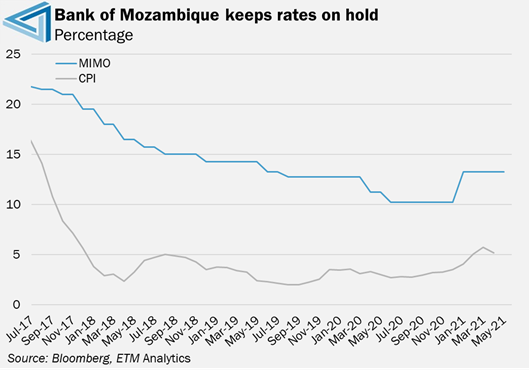 The MPC said in its statement that the decision to keep rates unchanged was based on the worsening economic risks and uncertainties against the backdrop downwardly revised short and medium term inflation forecasts, which mainly reflect the recent appreciation of the metical (MZN). Policymakers noted that the recent increase in currency volatility stems from the prevailing high uncertainties and asymmetries in forming expectations by operators in the foreign exchange market. In the external environment, the key risks are the increased fluctuation in financial assets and commodities prices, as well as the emergence of new variants of the coronavirus, according to the central bank.

Looking ahead, the MPC said that a slower recovery of the economy is anticipated for 2021. This prospect is underpinned by weak domestic demand, coupled with the suspension of Mozambique’s LNG project, despite the forecast of a gradual upturn in external demand, and the expected containment of the spread of COVID-19. Thus, given the limited space of monetary and fiscal policy, the deepening of the structural reforms in the economy remains ever so relevant. The government needs to push through reforms aimed at strengthening institutions, improving the business environment, attracting investment and creating jobs.