US Treasuries are extending their gains in early trade this morning following a bond rally yesterday which was sparked by the BoJ and then supported by weaker-than-expected US economic data. The benchmark US 10 yr yield is trading below 3.35%, while the 2yr yield is just above 4.000%, levels not seen since September last year. The rate-sensitive 5yr tenor, meanwhile, is trading below its 200DMA for the first time since August 2021 to illustrate how the bond market bulls have regained control of the market. German bunds were also bid yesterday, with the curve bear flattening and the inversion of the 2v10 spread deepening to almost 45bp.

Australian bonds have rallied this morning, with yields sliding more than 20bp as the market catches up to yesterday’s moves. Traders are rushing into havens amid a slowing US economy that is heightening recession fears. This may be carried through into the European and US sessions later today, with equity markets looking to remain on the back foot and very little data out to ease any concerns regarding economic growth.

Ghana: More than 24 aid and campaign groups on Wednesday called on international creditors to cancel a large proportion of Ghana's debts. In an open letter, the groups which all have operations in Ghana said that "the people of Ghana have suffered extensively from the crisis. Wealthy private lenders must share in the costs of a crisis they helped to create and cancel the debt." Signatories of the letter, which included Oxfam, Christian Aid, Caritas Ghana, Debt Justice, and ActionAid, said that the key challenge was to get private lenders to agree to a significant debt cancellation. The groups added, "the G20 can help by making clear that Ghana will be politically and financially supported to remain in default on any creditor which does not accept the necessary debt restructuring."

Kenya: Central Bank of Kenya Governor Patrick Njoroge has forecast economic growth to increase by as much as 6.2% this year, compared with an estimated 5.6% in 2022. According to Njoroge, Kenya, the world’s biggest exporter of black tea and a popular wildlife tourist destination, will benefit from having a diversified economy and limited exposure to global undercurrents. Njoroge’s comments come as the Horn of Africa region battles the most severe drought in four decades that has curbed production of key Kenyan farm exports, including tea, flowers, fruit, and vegetable, its biggest generator of foreign exchange after remittances by Kenyans living abroad. Agriculture, Kenya’s economic mainstay, contracted for a fourth consecutive quarter in the three months through September. Meanwhile, Njoroge also said that Kenya’s “borrowing will need to be measured” to tackle debt vulnerabilities and ensure sustainability. Kenya plans to tap the markets to plug its budget deficit.

Nigeria: Speaking on Wednesday, Finance Minister Zainab Ahmed said that Nigeria's debt trajectory is sustainable and that the country plans to bring its key debt service-to-revenue ratio down sharply this year and would not borrow on international capital markets. Nigeria's government spent four-fifths of its revenue on servicing debt last year, a ratio that could rise to 100%, according to IMF estimates. According to Ahmed, "80% is not sustainable, and our plan is that it is coming down to 60% in 2023." Note that tighter global financial conditions have made it difficult to borrow internationally. Ahmed indicated that yields are too high for Nigeria to consider selling Eurobonds this year. Nigeria will only consider returning to the market if yields fall back to levels they were at in 2021, according to Ahmed.

Nigeria: Despite concerns over widespread insecurity, including attacks on election officials, the head of Nigeria's electoral commission has said that the elections will not be postponed. According to the head, the Independent National Electoral Commission (INEC) is well prepared to facilitate voting despite current challenges. The head added, "the commission is not contemplating, let alone planning to postpone the 2023 general election." Ahead of the February elections, Nigeria is facing unprecedented insecurity that has seen the INEC itself targeted by violence, including when attackers bombed the headquarters of the electoral commission in December.

Uganda: The Ugandan Cabinet has reportedly provisionally approved the license for the construction of the $4bn East African Crude Oil Pipeline on condition that it secures all other required consents and permits. The project is for the development of a 1,443-km conduit from Uganda's oil fields to Tanzania's Tanga port which is set to earn Uganda and Tanzania significant foreign exchange income.

Uganda: Following the conclusion of the second and third reviews under the Extended Credit Facility arrangement for Uganda, the IMF has approved a $240mn loan, bringing the aggregate disbursement to $625mn to date. The lender also granted a waiver of non-observance of a performance criterion on the Ugandan central bank's net international reserves. According to the lender, "notwithstanding the challenging environment and a heavy reform agenda, all but one quantitative performance criteria and most indicative targets, for March, June and September were met, and the authorities have taken important steps to advance structural reforms." The economy is forecast to expand by 5.3% in FY 2022/23, while inflation is expected to rise to 8.3%. Risks to the outlook include higher imported inflation, lower external demand, climate change, and a deteriorating public health outlook.

There has been no respite for the Kenyan shilling at the start of the year, with the currency continuing to weaken and repeatedly plunging to record lows. The currency is already down by over 0.50% YTD against the USD, following losses of more than 8.0% last year. The shilling has continued to weaken on the back of hard currency demand, mainly from fuel importers and the manufacturing sector, which is outweighing supply. Additional pressure on the shilling has emanated from tighter global financial conditions, a persisting current account deficit, and reduced dollar inflows from key export-earning sectors. 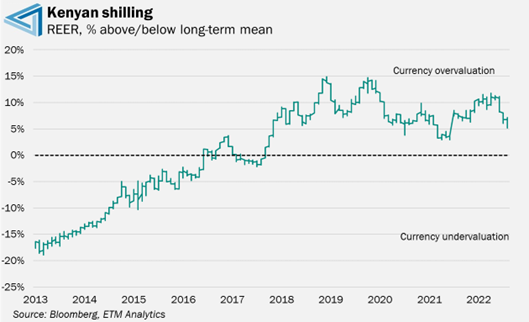 Fundamentally, a growing external imbalance, tighter global financial conditions, and limited foreign exchange inflows amid an unfavorable macro backdrop are some of the factors that are set to continue pressuring the shilling in the near-term. Continued shilling weakness is set to bolster inflationary pressure in Kenya and also lead to higher financing costs in terms of servicing dollar-denominated external debts and liabilities.

African sovereign bonds have underperformed a basket of global high-yield sovereign bonds since the onset of the pandemic in 2020, illustrating the impact of the economic crisis on the vulnerable continent. This is illustrated by the widening of the spread seen in the accompanying chart, which plots the yield-to-worst return of African bonds compared to global sovereign bonds classified as high-yield. The spread between the two has widened from a long-term average of less than 100bp before 2020, to levels over 300bp at present, speaking to the increased perceived risk of holding African bonds even when compared to what are considered the most fragile global debt instruments. 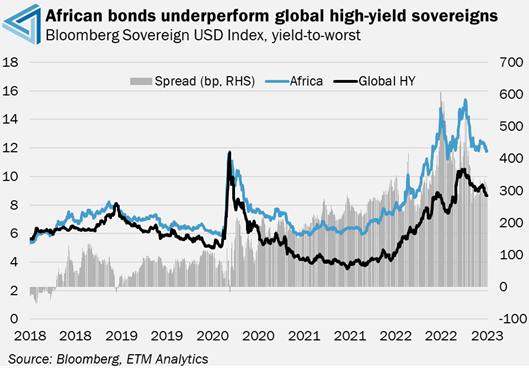 This underperformance, however, presents an opportunity. At current yields, African sovereign bonds are viewed as extremely cheap, especially for those countries with improving fundamentals. Contagion risk from possible blowouts in the more fragile countries, such as Ghana, remains a concern, but we see this as being minimal when looking towards bonds of the continent’s more fiscally prudent nations. Investors are thus expected to be quite discerning when looking for value in the African debt space, making the need for fiscally prudent and economically sound policy reforms in Africa a necessity in order to continue to attract foreign inflows and maintain or improve the stability of their debt markets.

Ghana’s producer price inflation eased substantially in December, from 78.1% in November to 52.2% in December. Nevertheless, producer price inflation remains elevated due to soaring input costs, supply chain disruptions and currency weakness. The improvement in Ghana’s PPI in December was a result of the cedi rebounding by almost 30% against the US dollar through December and easing commodity prices towards the back end of last year. The rally in the cedi followed the staff level agreement for a $3 billion IMF support package. 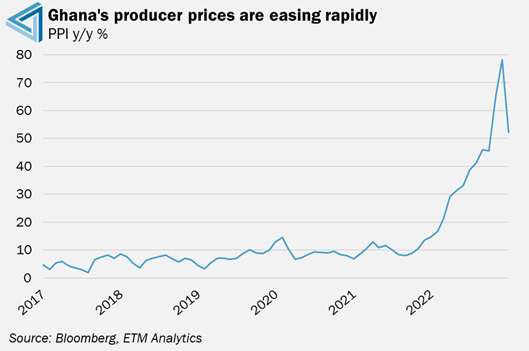 Since the start of 2023, we have seen the cedi start to weaken again, which could be a factor that weighs on the recent easing of producer price inflation. However, globally we have seen producer prices easing as input costs have been falling, especially oil prices which are a main contributor to input prices in Ghana. Oil prices decreased by approximately 10% in December, which is another reason for the sharp decline in PPI.

The steep decline in producer inflation could bode well for next month's headline inflation figure. Consumer price inflation accelerated to 54.1 y/y in December, driven by rising fuel, utilities and food costs. International reserves have also dwindled to less than two months of import cover. However, if the cedi continues to stabilize, we will see producer price growth continuing to ease and this will hopefully start to result in lower consumer price growth as well.